Type 2 diabetes is rapidly becoming one of the world’s greatest problems.

For so many people diabetes is a chronic, progressive disease that causes devastation — but it doesn’t have to be.

With this in mind, let’s take a look at what has been called a diet to reverse type 2 diabetes.

This article will focus on the work of the Dr. Andreas Eenfeldt—the diet doctor—someone who has helped tens of thousands of people to improve their health.

Diet Doctor has helped thousands of users address hyperinsulinemia and insulin resistance, which is a cause of type 2 diabetes.

But first, some background information.

At present, it’s probably fair to say that type 2 diabetes is one of the worst epidemics ever seen in history.

Although diabetes has always existed, it wasn’t until the 1980s when the disease began to spiral out of control.

The prevalence of a disease doesn’t just shoot into orbit over a few short decades. That is unless we are doing something seriously wrong.

Is the Modern Diet Causing the Type 2 Diabetes Epidemic?

Important to realize is that the increase in type 2 diabetes rates paralleled the growing obesity epidemic.

Of course, the logical thing to do is to look at when this trend began. In this case, both of these devastating conditions had their roots in the early 1980s.

So, is there any particular event that could have sparked this health crisis?

Looking at this chart, we can see that obesity rates were relatively stable before the introduction of the first ever dietary guidelines.

So, what did the dietary guidelines of 1980 tell us to do?

In short, the guidelines urged us to eat low-fat food, and a lot more grains and starches.

But did we actually follow what the guidelines told us? Not really.

Key Point
There has been an explosion in rates of type 2 diabetes since the 1980s.

Are Rates of Obesity Still Increasing? 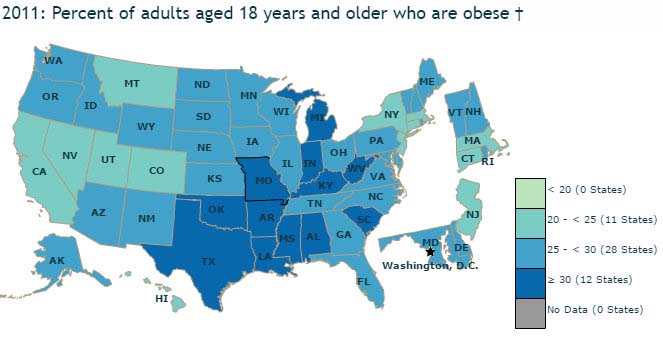 Here is how they look now: 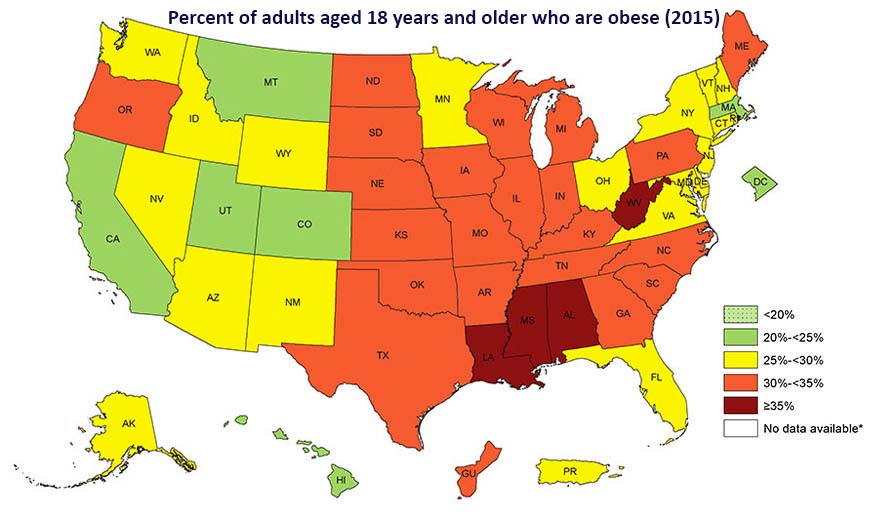 For most states, the obesity rate is now somewhere between 30 and 35%.

In like manner, many European countries are also following this trend.

These rising obesity rates have also led to the increasing prevalence of type 2 diabetes.

Key Point
Obesity rates continue their rapid rise; not only in the United States, but in much of Europe too.

As diabetes is a progressive (if untreated) vascular disease, these worrying statistics set the scene for rampant, silent damage in the body.

Dr. Joseph Kraft, a clinical pathologist with expertise in diabetes, believes this is critical;

“Those with cardiovascular disease not identified with diabetes are simply undiagnosed”

Scary stuff for sure, but an important reminder that catching diabetes early on is so important.

Type 2 Diabetes Symptoms: What To Look For

Here are some typical tell-tale signs of diabetes to watch out for.

Always feeling thirsty is a common symptom of type 2 diabetes

Suddenly feeling extreme thirst — no matter how much you drink — could be a high blood sugar symptom.

This excessive thirst comes as a result of frequent urination due to excessive blood sugar.

As mentioned above, if you start to urinate more frequently then this is also a possible sign of type 2 diabetes.

Maybe you are wondering just how often ‘frequent urination’ means?

While there is no universal figure, if you are going much more than the average 4-7 times per day then it may be a good idea to see your doctor.

There are also several other symptoms of type 2 diabetes that may include:

Key Point
Undiagnosed diabetes can lead to many complications. For this reason, it’s important to know the symptoms.

Assuming that you don’t already know the website, Diet Doctor is an immensely popular site that focuses on weight loss and diabetes reversal via a low-carb dietary system.

Is low-carb the only way to tackle these issues? Perhaps not, but it appears to be effective.

Run by Dr. Andreas Eenfeldt, a Swedish family doctor; it is is now the most trafficked low-carb website on the Internet.

Reading these stories is meaningful, as it should be to anyone with an interest in nutrition.

While you may not think diabetes affects you or your family personally, the problems associated with excessive blood sugar/insulin affect so many people.

Key Point
Diet Doctor is a website that focuses on weight loss and diabetes reversal through a low carb diet. It has helped thousands of people recover their health.

What Foods Do Diet Doctor Recommend? 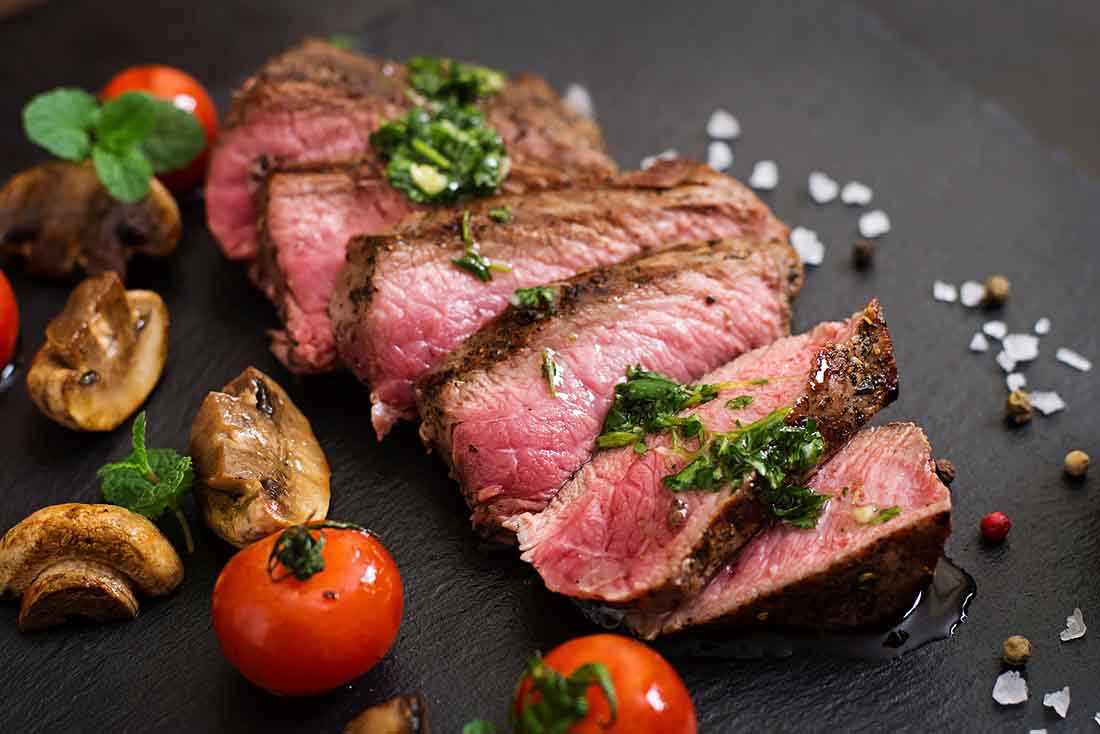 “There are no quality studies showing that a carbohydrate-rich diet is beneficial.”

Generally speaking, the guidance is that diets should be based around; 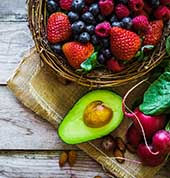 Overall, the emphasis is on fresh whole foods that are high in nutrients. Other choices like dietary fats and oils, as well as very dark chocolate, can also be added in.

In general, the main thing missing from this diet is all the sugary snacks and processed food options that most people eat.

While it may feel like it’s impossible to go without these foods at first, after a while, the cravings will subside.

It may taste delicious right now, but almost everyone who gives up sugar for more than a few weeks soon finds sugary foods overly sweet. In short; people learn to appreciate the taste of real food.

But while far from being the worst foods in the world, they contain moderate amounts of fructose that will raise blood sugar levels.

Also, fruit such as berries, avocado, and olives are not only low in sugar but also some of the most nutrient-dense choices.

Key Point
Followers of Diet Doctor have used a low carb diet to reverse type 2 diabetes. In addition, don’t fear naturally occurring fat – it is good for you.

For diabetes resources and information related to low-carb dietary interventions, head over to Diet Doctor.

Thank you Doc diet I should eating no sugar carb foods please continue your research for the benefit of everyone.

Maybe this is what you’re looking for; https://www.dietdoctor.com/much-sugar-breakfast-cereal

Great to hear that – well done and congratulations!

Dietdoctor.com featuring Dr. Jason Fung lierally saved my life. I was skeptical at first as unfortunately most Dr.s still rely on old erroneous information, and I always remember Abraham Lincoln’s online quote about not believing everything on the internet.
3 months later I no longer have Type 2 Diabetes and am over 65 lbs lighter. I have a way to go to lose more weight to keep diabetes small in the rear view mirror.
My lab results:
https://docs.google.com/presentation/d/1IAsRPWQi1AlNkx0sujHOVTmRgEZPieUH1hxHB3RiYdw/edit?usp=drive_web

Wow, that’s really impressive. Well done.
Skepticism can be positive but in terms of nutrition it’s often a barrier to health.
I just read through your presentation and you’ve made amazing progress – keep going!

I found diet doctor Christmas 2015. I am now no longer diabetic, 4stone lighter and very much healthier. This way of eating works and your article makes it so easy to understand.

That’s great to hear, Pat!
And it’s not only you — thousands of other people achieve similar results.
It’s a little sad that so many people continue eating a poor diet, rely on medication and see it progress.