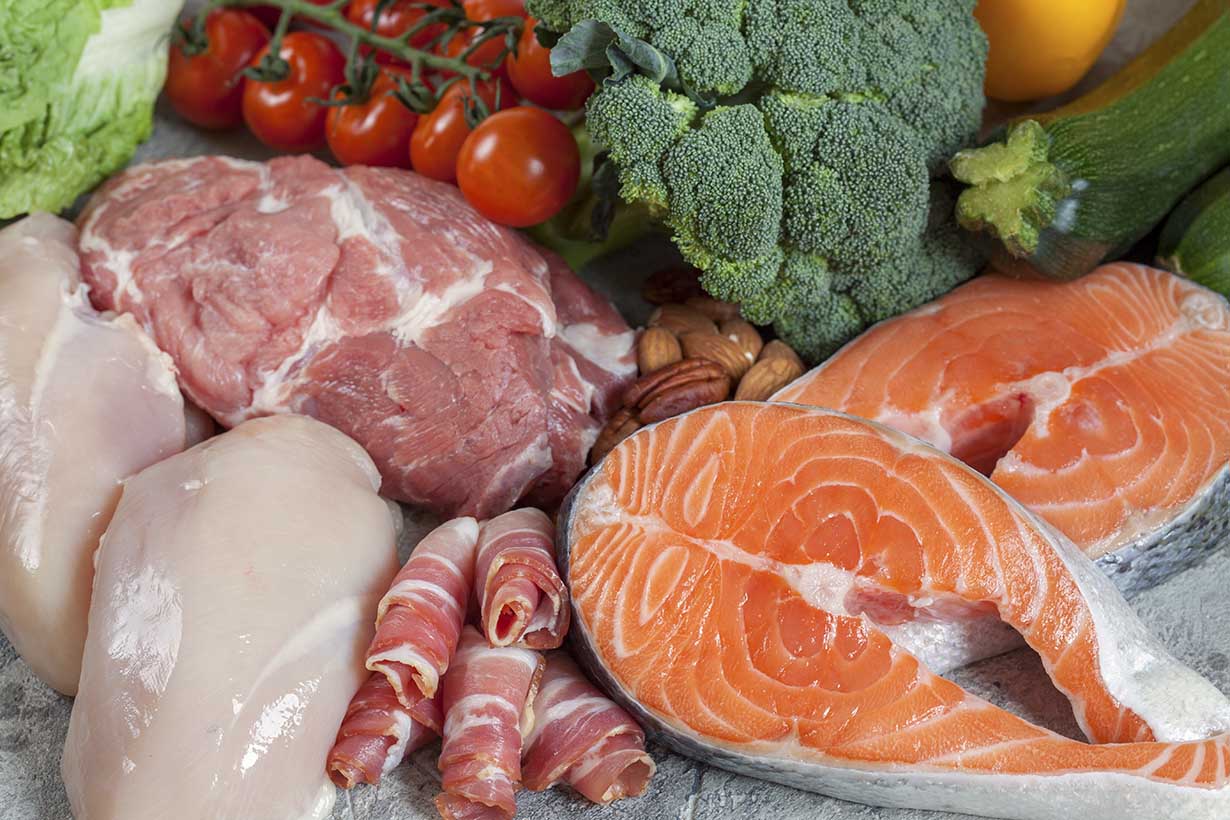 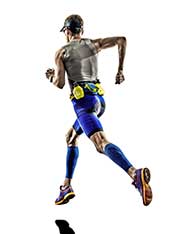 You may have heard that glucose is essential for energy.

Furthermore, there’s a common message that we need hundreds of grams of carbohydrate per day if we are physically active.

However, this isn’t strictly true, and the idea of carbs being essential for energy is incorrect.

In fact, some research asserts that being keto-adapted can have substantial performance benefits in sports and for athletes.

This article provides a guide to keto-adaptation, the performance benefits ketone bodies may have, and the limitations.

Keto-adaptation simply refers to the period during which we “adapt” to a ketogenic diet.

After years—or perhaps even decades—of following a high carbohydrate diet, our body optimizes itself to burn glucose for energy.

In short, the primary energy source has been glucose for a long time; we can’t just flip a switch and instantly start burning fat.

Take the abundant stores of glucose away, and there’s bound to be an adjustment period.

During this adaptation time, a low carbohydrate intake depletes the body’s glycogen stores.

Glycogen is a storage form of energy in the muscles and liver, and it is the first place your body will look for fuel.

However, once the glycogen stores are empty, the body will begin to produce ketones for energy. The liver will also upregulate the number of fat-burning enzymes to better utilize all the dietary fat coming in.

Once the body starts using ketones for fuel, we enter a state known as “ketosis.”

On the downside, many people feel kind of “off” or even sick until they can efficiently burn fat.

As a result, symptoms such as headaches, nausea, tiredness, and fatigue are not uncommon. Many people refer to these common side effects as “low carb flu” or “keto flu”.

It’s important to realize that being “in ketosis” and fully keto-adapted are not the same.

The hardest part of starting a ketogenic diet will always be the first week, due to the initial flu-like symptoms.

However, gaining the full performance benefits of keto-adaptation will take somewhere between three weeks and a couple of months.

Key Point: Keto-adaptation refers to the period of time in which the body adapts to burning fat rather than carbs. Some flu-like symptoms are possible during this time

How Long Does it Take To Become Keto-Adapted? 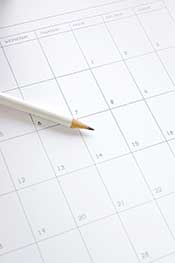 Firstly, we are all slightly different biochemically and regarding our metabolic state.

Becoming a “fat burner” involves large-scale metabolic changes, and the body does need time to accustomize.

For some people, the adaptation period might be quick and painless, while for others it may take a little longer.

One thing worth pointing out is that each individual’s keto-adaptation “timeline” somewhat depends on their actions.

For instance, if you are feeling lousy, tired, and craving carbs then this is an urge you should resist.

On the other hand, if you can’t resist temptation, then it will only delay the keto-adaptation process.

Unfortunately, some people get stuck in a negative cycle. For example, they want to try a ketogenic diet but eat carbs whenever they start feeling a lack of energy.

After this, they feel guilty and try to start a keto diet again…. and then the cycle continues.

How Can You Tell If You’re in Ketosis?

After the first week of keto and possible flu-like symptoms, it is common to notice more energy and a cleaner feeling of focus.

However, if you want to be (more) sure you are in ketosis, then there are a couple of ways to find out.

The first is to use ketone strips.

There is a guide on how to use ketone strips here.

These are very cheap, but not always the most accurate.

A second option is a ketone blood meter, which is higher in both accuracy and price.

Key Point: Ketosis and keto-adaptation are not the same things. To be fully fat-adapted will take anything from three weeks, and performance benefits should increase with time. 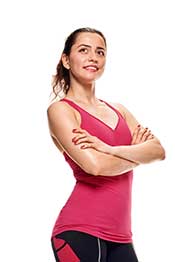 The Performance Benefits of Being Keto-Adapted

In fact, the Academy of Nutrition and Dietetics suggests that athletes should aim for the following carb intake (2);

For example, according to the Academy of Nutrition and Dietetics, a 180lb marathon runner should be consuming between 648 grams and 990 grams of carbohydrate per day.

This carb-fuelling idea is the traditional view of what an athlete needs.

But is endurance running on keto possible?

According to the latest research, there are many benefits of burning fat for energy.

Some assert that it may even be more beneficial than carbohydrate fueling. But is there any evidence for that claim?

What Do Studies Say?

Over the past few decades, more and more studies are investigating the possible benefits of being a fat-adapted athlete.

Here is one of the most significant;

This 2015 study shows that long-term keto-adapted athletes have a 2.3x higher rate of fat oxidation than high carbohydrate athletes (3). 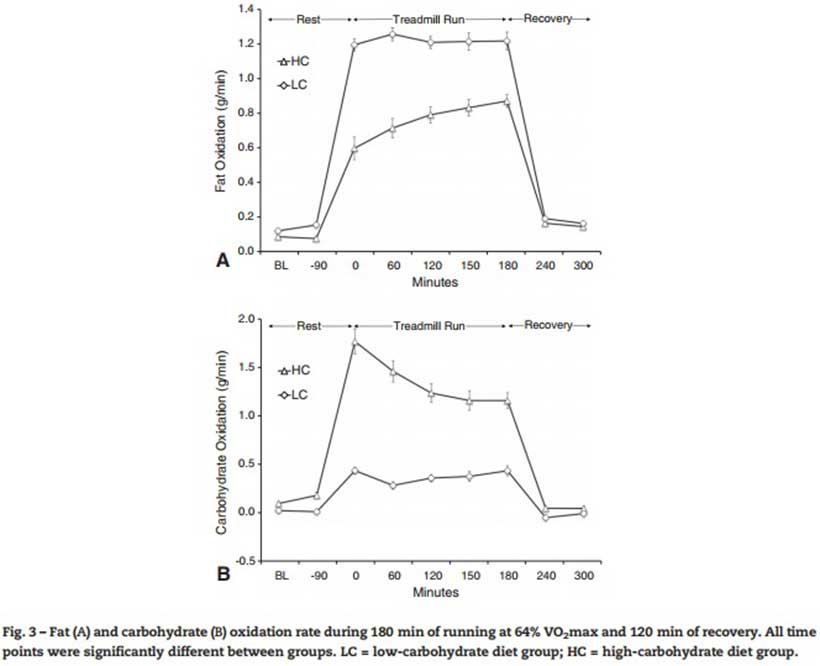 Additionally, despite a very low carbohydrate intake, the keto-adapted athletes were able to maintain normal glycogen levels throughout a 180-minute run.

Some more study findings which support the performance benefits of a ketogenic diet include;

What Does This Mean?

Despite these impressive findings on ketogenic diets for performance, it is worth remembering that there is no one-size-fits-all diet.

Higher carbohydrate diets also have a lot of evidence behind them for sporting performance.

However, this data does show that the idea of high-carb diets being the only choice for athletes isn’t true.

Key Point: There is a wealth of evidence backing the performance benefits of being keto-adapted. This is especially the case regarding increased fat oxidation during exercise.

Myths About Physical Performance in Ketosis

There are a couple of myths regarding sporting performance and keto;

1. Some assert that a ketogenic diet is unsuitable because we need glucose to fuel strenuous exercise.

However, our body is very capable of making its own glucose in the absence of exogenous (dietary) glucose.

This process is known as gluconeogenesis.

Gluconeogenesis is a metabolic pathway in which the body synthesizes glucose from non-carbohydrate sources such as dietary amino acids, glycerol, and lactate (11).

In other words, fat-adapted athletes can utilize energy both from glucose (through gluconeogenesis) and ketones.

The rate of gluconeogenesis increases as athletes progressively become more adapted to a carbohydrate-restricted diet.

As shown in the studies on ketogenic diets and performance, keto-adapted athletes can maintain blood glucose and glycogen levels even during intense exercise.

This is not the case for those in the beginning stages of a ketogenic diet.

There are studies which show ketogenic diets can impair physical performance.

However, these are very short in duration and last for one or two weeks.

One of the more extended studies, which was a 3-week intervention, found that while the diet increased fat oxidation, it impaired overall performance (12).

As stated earlier on, much of the benefits from becoming keto-adapted occur after three weeks and become more pronounced with time (1).

Key Point: Both carbohydrate and fat are energy sources; the idea that dietary glucose is essential for energy is not true.

How to Become Keto-Adapted Quickly and Easily

While it’s not always straightforward, becoming a fat-adapted athlete can be much more comfortable if we follow some general rules;

Despite the studies mentioned in this article, research on ketogenic diets and sporting performance is at an early stage.

Further, carbohydrate-fueling and traditional sports nutrition strategies have a greater evidence base at this time.

However, ketogenic diets are certainly a viable alternative for athletes to consider.

They do appear to have some intriguing benefits which progressively increase with the degree of keto-adaptation.

It would be interesting to see further longer-term studies in this area to see how ketogenic diets compare to carbohydrate-fueled nutritional strategies.

At the end of the day, there’s no one diet that’s a perfect fit for everyone.

And that goes for athletes too.

8 thoughts on “Keto Adaptation: What Performance Benefits Can It Have?”