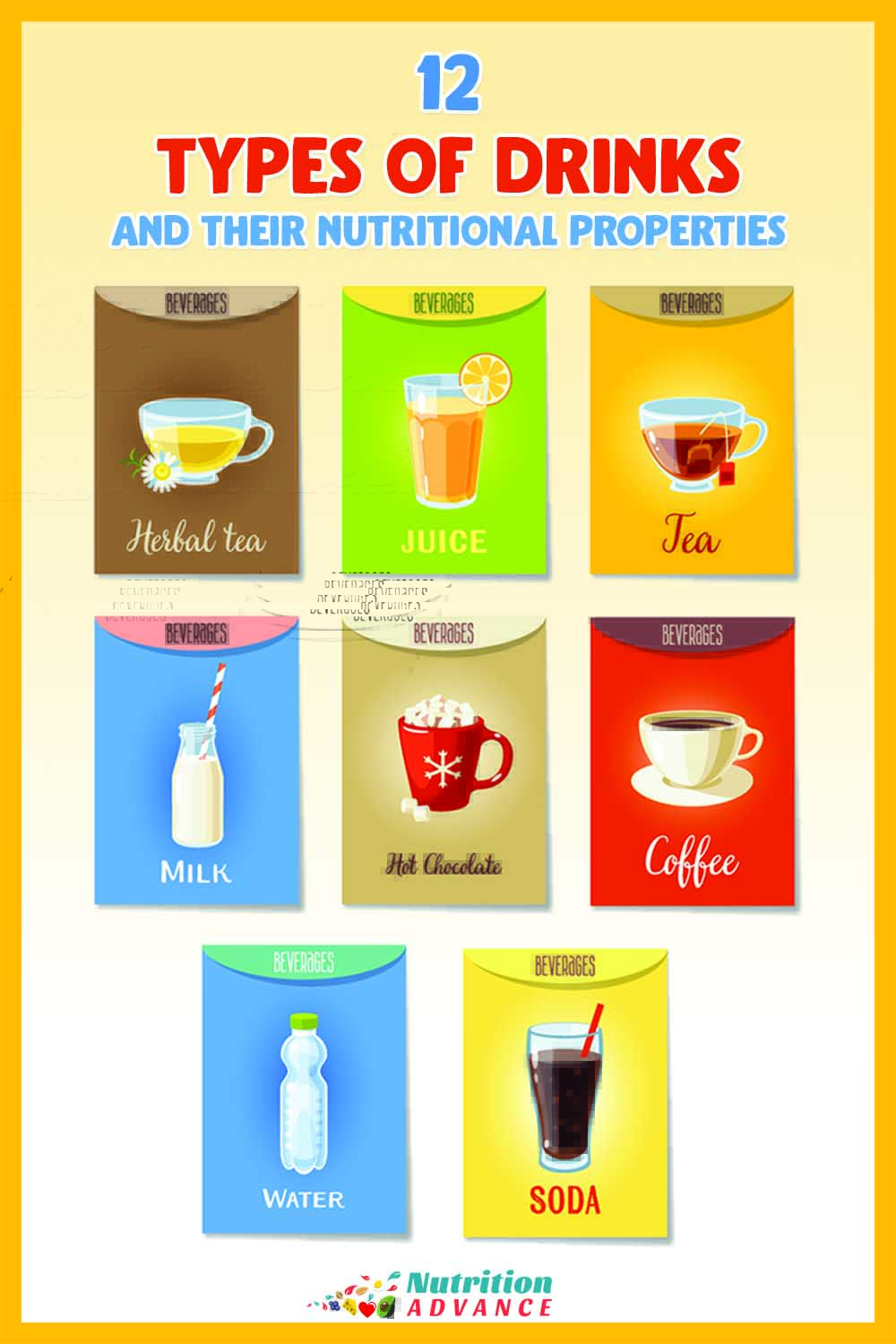 There are many different types of drinks, some of which we consume daily and others with less regularity.

This article takes a look at the fifteen common varieties of drinks and their characteristics.

There are so many different alcoholic beverages available, and these include beer, hard cider, liquors, spirits, wine, and many other drinks.

Some of these options, such as beer, can be quite high in carbohydrates and thus high in calories. In contrast, certain alcoholic drinks like vodka and whisky contain no carbohydrates. As a result, these drinks tend to provide similar alcohol content for fewer overall calories than drinks like beer.

However, all alcoholic drinks contain calories. This is because one gram of alcohol yields approximately seven calories (1).

For example, 100 ml of a drink containing 5% alcohol will provide 5 grams of alcohol. Thus, this will be 35 calories per 100 ml on the alcohol content alone – any carbohydrates/sugar present will add to this.

Excessive alcohol intake can be harmful and habit-forming. However, the research on low to moderate intake levels has shown conflicting findings. From extensive systematic reviews of the literature, it appears that any alcohol intake level might be detrimental to long-term cancer risk (2, 3, 4).

On the other hand, according to large Cohort studies and systematic reviews, light-to-moderate drinkers might potentially have lower cardiovascular risk (5, 6). However, the evidence is unclear, and this should not be a reason to start drinking for those who do not.

While most of us probably consume too much sweet milk chocolate, cocoa (and hot chocolate) can be quite nutritious.

Gram for gram, cocoa is one of the best dietary sources of fiber, copper, magnesium, and various polyphenols (7, 8).

All of these components of cocoa may have some benefits for human health. However, it is important to note that some ‘hot chocolate’ products are primarily sugar, which is often the first ingredient.

Pure (100%) cocoa tends to be a better choice, as this is easy to mix with hot water/milk and a smaller amount of sugar (or a sweetener) to taste.

To find out more about cocoa, see this guide to its nutritional properties.

Coconut water is a kind of unusual drink in that it doesn’t really belong to any category: it’s not fruit juice, and it’s not water.

Rather, coconut water is a clear liquid found within fresh coconuts.

Internet influencers have exaggerated the supposed benefits of coconut water over recent years. That said, it does provide a decent mix of vitamins and minerals, electrolytes, and a bit of sugar (9).

There is no need to consume coconut water, but it’s a refreshing drink for those who enjoy the taste.

Coffee is one of the most popular drinks in the world, and it is easy to understand why.

For one thing, coffee tastes delicious in all of its varieties. It is also the most common source of caffeine, which has proven benefits itself for improving focus, concentration, and potentially exercise performance (10, 11, 12).

While popular around the world, how people drink coffee differs from country to country. Some countries prefer freshly-brewed coffee, whereas instant coffee enjoys more popularity in others.

Interestingly, according to statistics, the Netherlands is currently the world’s largest consumer of coffee, consuming 8.3 kilograms per year per capita (13).

Traditionally, coffee can be enjoyed black (as espresso or Americano) or mixed with milk to make drinks like latte and cappuccino.

However, there is also a broad range of almost dessert-like coffee options available these days. These drinks often contain large amounts of calories, sugar, and flavorings, so it is probably better to limit such drinks.

These products tend to contain several additives, such as colors, flavorings, and sweeteners. However, they are also mostly free of calories and added sugars, making them a healthier choice than regular soda.

While some people tend to be wary of “artificial” (or anything not “natural”), diet soda tends to result in weight loss compared to regular sugar-sweetened beverages. In a randomized controlled trial, sucrose (table sugar) led to significant weight gain compared to sweeteners including aspartame, sucralose, and stevia (14).

For more information on sweeteners, see this guide to all the common options.

Some of the most popular brands around the world include Red Bull and Monster.

While concerns have been raised over the high caffeine content of such drinks, safety studies have shown that 400 mg of caffeine per day is generally safe for adults (16, 17, 18).

These drinks can sometimes be high in sugar (and thus calories), but a broad range of sugar-free varieties has become available in recent years.

It is important to note that excessive intake of energy drinks, mainly due to the caffeine content, can cause problems for those who enjoy them.

In this regard, energy drinks can potentially cause adverse events like insomnia, gastrointestinal issues, and jitteriness when over-consumed (19).

For more information, see this review into the potential downsides of energy drinks and in what circumstances they can be a concern.

Fruit juice refers to the pure liquid from fresh fruit, with no added sugars. Some of the most popular options include orange, apple, and pineapple juices. These drinks tend to be an excellent source of vitamin C, but they are also a concentrated source of fruit sugars and calories.

Some people thus feel that fruit juice isn’t a healthy choice. However, while whole fruit is probably a better option, fruit juice does not seem to have any clear negative effects. For example, a systematic review and meta-analysis of randomized controlled trials demonstrated that fruit juice had an overall neutral impact on blood sugar levels (20).

Furthermore, a systematic review of the literature on 100% fruit juice and dental health was inconclusive. This review found that fruit juice was not associated with tooth erosion in children or adolescents. Still, weak evidence from controlled trials in adults suggested it might cause some degree of tooth erosion (21).

A further systematic review showed that 100% fruit juice appears to increase the risk of dental caries in children slightly, but most sources of sugar/carbohydrate appear to increase this risk (22).

Perhaps the main issue with fruit juice is that it is just easier to over-consume than whole fruit. This is because whole fruits contain fiber and tend to be more filling than just drinking juice. However, a large-sized orange typically contains 87 calories and 17 grams of sugar, while a cup of orange juice provides 119 calories and 21 grams of sugar (23, 24).

In other words: it’s much easier to consume too many calories from a few glasses of orange juice per day than it is by eating multiple whole oranges.

Herbal tea is distinct from “true tea” as it refers to drinks made from plants other than Camellia sinensis (responsible for green and black tea).

These herbal teas can come from flowers, herbs, leaves, spices, and even mushrooms.

Some of the most popular herbal tea varieties include peppermint, rosemary, hibiscus, and rooibos.

Generally speaking, most herbal teas are caffeine-free (though yerba mate is a notable exception) (25).

In addition, some teas are purported to have relaxing effects, making them popular options at night time. Such options include chamomile and valerian tea, but the evidence for them helping with sleep or insomnia is mixed and inconclusive (26, 27).

To learn more about herbal teas, here are 31 popular tea varieties from around the world.

There are several different types of dairy milk, and the main difference is their fat content.

Whole milk, sometimes referred to as ‘full-fat milk,’ contains the most fat (and calories), whereas skim milk has less fat, fewer calories, and is thus more protein-dense.

However, there are also different milk varieties with slightly varying properties (such as goat milk).

Milkshakes are another trendy dairy drink, but they often contain large amounts of added sugar (and calories).

Whey protein, a by-product of the cheese-making process, is the most popular type of protein shake. Adding this powder to some water or milk makes a protein-rich (and surprisingly nutrient-rich) drink. There are also numerous ready-to-drink dairy-based protein shakes available.

Aside from these more common options, some more unique dairy drinks are popular around the world. One example is ayran, which is a popular summer drink in the Middle East. It is made by mixing yogurt with water and sea salt and then blending everything.

For more information, see these dairy products from around the world.

Over recent years, there has been a boom in the number of ‘plant milk’ products available on the market.

This has resulted from the increasingly popular plant-based movement, which is heavily supported by animal welfare/vegan advocates and the food industry.

Plant-based milks are often devised to have a similar nutritional profile to regular dairy milk. Thus, they are usually fortified with vitamin B12 and vitamin D.

Grains, legumes, nuts, seeds, and more can be the primary ingredient for making plant milk, but some of the most popular options include:

These varieties have their own pros and cons, and they are often not as protein-rich as dairy milk. Thus, it is a good idea to check the ingredients label and nutritional panel to see if they offer the desired qualities or not.

However, there are varying drinks that can come under this banner, including:

One of the main problems with such drinks is that they often contain large amounts of sugar and calories. Consumed often, these liquid calories can quickly add up and lead to weight gain.

As previously mentioned, research suggests that diet soda drinks made with a sweetener are likely healthier alternatives to sugar-sweetened beverages (14, 15).

While perhaps not traditionally recognized as a drink, soups and broths have risen in popularity over recent years.

To illustrate this point, ‘bone broth cafes’ and ‘bone broth bars’ have been opening up around the world.

These soups and broths can be reasonably healthy choices; they tend to supply several nutrients for relatively low calories. However, one thing to watch out for is that they can sometimes have quite high sodium content (28).

The supposed benefits are also often over-hyped: yes, they contain a few nutrients – but they are not “superfoods.”

Tea is one of the most popular drinks globally, and it is produced from the dried leaves of the Camellia sinensis plant.

How we drink tea differs around the world:

Like coffee, tea is a source of caffeine. However, black tea tends to contain around half as much per cup and green tea approximately just a quarter as much (29, 30).

Tea also contains a variety of polyphenols that may potentially confer health benefits. One of the most well-researched of these compounds is epigallocatechin gallate (known as EGCG).

On this note, systematic reviews and meta-analyses of randomized controlled trials have demonstrated that tea (and the polyphenols it contains) may have a positive impact on lowering LDL (31, 32).

For more on all types of tea, see this guide.

While not as popular as fruit juice, vegetable juice tends to offer more nutritional value.

Fruit juice is mainly a source of vitamin C, but vegetable juices contain a broad range of nutrients in moderate amounts.

Among these, carrot juice is an excellent source of vitamin A, and vitamin C. Tomato juice offers even more vitamin C and a good amount of lycopene, a carotenoid that may have important health benefits (33, 34, 35, 36).

Water is something that most of us drink daily, and it is otherwise known by the chemical name H2O.

For those who are unaware of the meaning, H2O means that each molecule in water contains one hydrogen (H) atom and two oxygen (O) atoms (37).

The most common types of water include:

In countries where tap water is safe to drink, all of these are good sources of water. Mineral water may offer a slightly higher provision of essential minerals, but that also comes at added expense.

All in all, many different types of drinks can feature in our diet.

Most of these options are perfectly good choices for hydration, but it is usually a good idea to limit the number of calories from liquids.

This is simply because it is much easier to over-consume calories from liquids than whole foods, which are much more satiating.