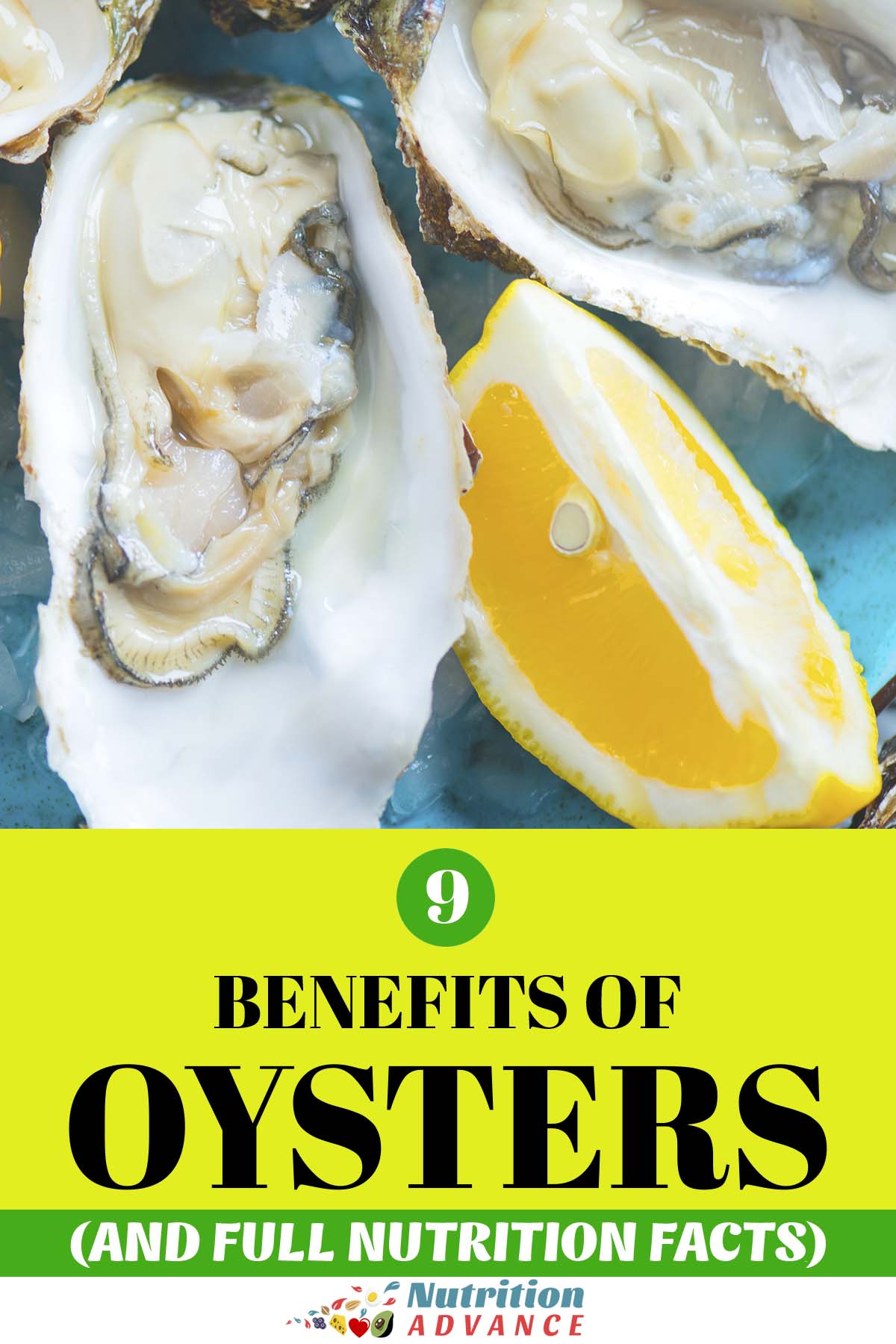 This shellfish is common in cuisines around the world, it is often considered a delicacy, and it provides almost every essential nutrient.

In this article, we examine the health benefits (and some potential side effects) of oysters alongside their full nutrition profile. 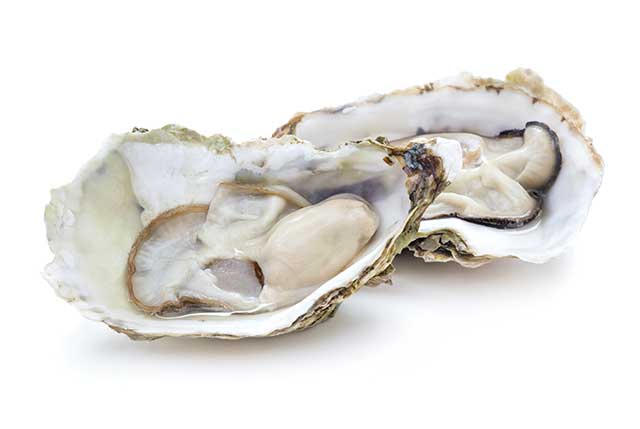 Oysters are a type of shellfish belonging to the Mollusca phylum.

As such, oysters are known as ‘mollusks’ like other members of the family, which include abalone, clams, cockles, mussels, and scallops.

Oysters have a hard, greyish outer shell and they live in salty and brackish waters around the world, particularly around Atlantic and Pacific coastal regions.

Although they are both classed as ‘shellfish,’ there is no relation between oysters and the crustaceans such as shrimp, crab, and krill.

Oysters provide various health benefits, and they are particularly good for their vitamin B12, omega-3, and mineral content.

Key Point: Oysters are a nutritious shellfish belonging to the Mollusca family.

In this next section, we will look at some of the numerous benefits that oyster intake can provide.

Although not commonly referred to when discussing the benefits of omega-3, oysters offer a good source.

Omega-3 is an essential fatty acid, meaning that we need to get it from our diet, and it has several health-protective benefits.

In this regard, studies show that;

While oily fish such as salmon and mackerel is the best source of omega-3, a serving of oysters provides a decent amount too.

2) An Excellent Source of Protein

One hundred grams of oysters only offer seven grams of protein, but it is the per-calorie protein ratio that is particularly impressive.

On this note, oysters offer this seven grams of protein for only 68 calories, which rivals lean red meat for protein density (1).

In plain English, this means that oysters offer a highly bioavailable and superior-quality source of protein.

Key Point: Oysters are very protein-dense and the protein they offer is high quality.

3) Oysters Are Extremely Rich In Zinc 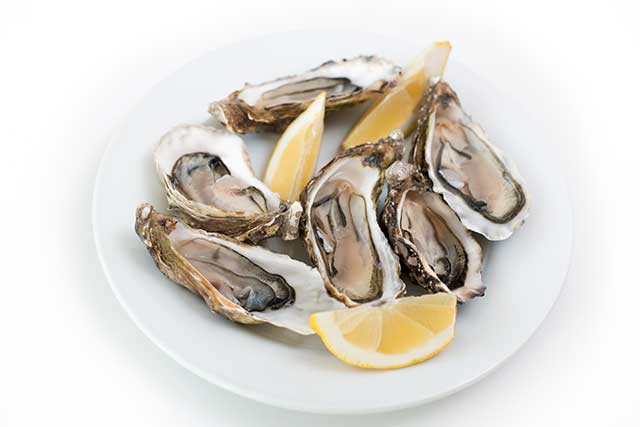 Zinc is an important mineral that has many functions in the human body.

Among these, zinc plays a crucial role in immunity, protein and DNA synthesis, and general growth and development (7).

Oysters offer a surprising amount of zinc, and they are the world’s best dietary source of the mineral.

One hundred grams of oysters provide an impressive 491% of the reference daily intake (RDI) for zinc.

For an example of how much this is, one single oyster offers around 50% of the RDI (1).

Key Point: Oysters are the best dietary source of zinc and they offer substantial amounts of the mineral.

Vitamin D functions as a hormone rather than a traditional vitamin, and it plays a crucial role in keeping the human body healthy.

Among its many functions, vitamin D promotes bone health and modulates cells, immune function, and inflammation. Also, it even has anti-cancer properties through its link with apoptosis (8).

Sunshine is the single best source of vitamin D, but we can also get it from our diet, and oysters are one of the best sources.

Therefore, oysters are a great potential source of the vitamin for people who don’t get enough sun exposure, or for individuals living in countries with long and dark winters.

Vitamin B12 is important for maintaining healthy blood cells and nerves, and it plays an essential role in DNA synthesis (9).

When people think of vitamin B12, red meat usually comes to mind.

However, oysters offer far more of this nutrient than any typical meat, and only organ meats like liver can rival their B12 content.

While oysters don’t offer as much B12 as liver, they are among the very best dietary sources of the vitamin.

Key Point: Oysters contain a significant amount of vitamin B12. 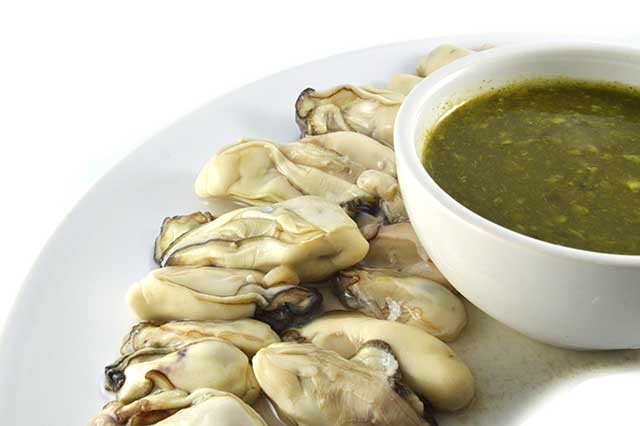 Copper is an essential mineral with several functions in the body, and it is necessary for maintaining healthy bones, tissues, and organs.

Additionally, the human body requires an adequate copper intake for the proper functioning of iron (13).

Once again, except for organ meats, oysters are the top dietary source of copper.

For those looking to increase their copper intake, calamari is another excellent source of copper.

Key Point: There are large amounts of copper in oysters.

Due to the wide range of nutrients they contain, oysters may positively contribute to cardiovascular health.

Firstly, oysters are very high in zinc, which appears to play an essential role in cellular structure and maintaining optimal cardiovascular function (14, 15).

Furthermore, population studies suggest that zinc deficiency may be a general risk factor for cardiovascular disease (16).

Oysters also offer several other nutrients that help to regulate blood pressure and relax arterial walls, such as potassium and magnesium (18).

Key Point: Oysters provide a range of nutrients that may have cardiovascular-protective properties.

8) May Boost Testosterone Levels In Men

It isn’t difficult to hear claims that oysters have aphrodisiac properties.

I’m not sure if this is true, but it is possible that oysters may help to boost male testosterone levels.

Further to this, in a study of 88 men, men with normal (rather than low) zinc status had significantly higher testosterone levels (20).

Since oysters contain almost 500% of the RDI for zinc per 100 grams, they will certainly boost zinc status in individuals with low levels.

Lastly, probably the best thing about oysters is the incredible nutrient density they offer.

One hundred grams provides many multiples of the RDI for numerous essential vitamins and minerals.

All for only 68 calories.

Put simply; this makes oysters one of the most nutritious foods on earth.

Key Point: Oysters are extremely high in nutrients and they are low in calories, making them exceptionally nutrient dense.

Most foods have a few potential drawbacks in addition to the positives, and oysters are no exception in this regard.

Here are a few concerns. 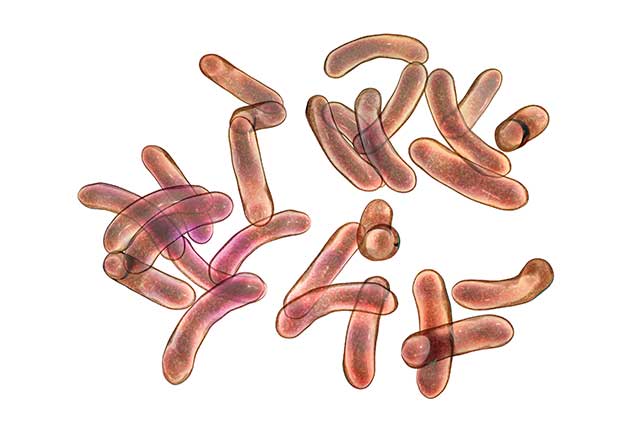 Unfortunately, raw oysters are one of the most common sources of vibriosis infection, caused by a bacterial strain called Vibrio (21).

Vibrio bacteria can grow in waters around the world, and the risk is higher in warmer water and during the hottest periods of the year (23).

Since oysters, like all mollusks, feed on particles in their surrounding waters, they can become contaminated with Vibrio bacteria.

The less prevalent (but worst) strain of Vibrio is known as Vibrio vulnificus, and consuming a single oyster that contains this bacteria can result in death within 24 hours. The bacteria has a mortality rate of 50% (24, 25).

Oysters intended for raw consumption should have production safeguards to ensure they do not contain harmful levels of bacteria.

However, the Centers For Disease Control (CDC) state that, “to reduce your risk of getting vibriosis, don’t eat raw or undercooked shellfish, such as oysters” (26).

In addition to Vibriosis, raw oysters can be a risk factor for certain other types of foodborne illnesses.

Once again, these foodborne pathogens can contaminate oysters if they are present in the waters where they reside.

There are numerous safety procedures in place to avoid selling contaminated oysters to the public, but the only “sure” way to avoid these illnesses is by properly cooking oysters (30).

Firstly, shellfish allergies primarily relate to sea animals in the Crustacea family such as shrimp and crab.

Additionally, many people who are allergic to crustaceans can still eat oysters.

Some studies suggest that cross-reactivity is low, and only about 14% of people are allergic to both crustaceans and mollusks (31, 32).

However, it is still possible for individuals to have an allergy to oysters.

Like all allergies, the symptoms are usually mild, but the potential for severe allergic shock (anaphylaxis) exists (33).

Key Point: Oyster allergy can be an issue, but it is not as prevalent as allergies to crustaceans.

The tables below show the complete nutrition profile for oysters per 100 grams raw (1).

Oysters offer an outstanding nutrition profile which is only really rivaled by organ meats.

As the nutritional values show, this shellfish offers a substantial number of vitamins and minerals for very few calories.

With such a large amount of B12, vitamin D, selenium, copper and zinc, including oysters in our diet can offer numerous benefits.

What Is Abalone and Is It Good For You?

What Are Cockles? Nutrition Facts, Benefits, and Uses

Thank you for this summary. Very helpful. Seems reliable. Well presented, too. Thanks again. Ruth Whetsel.