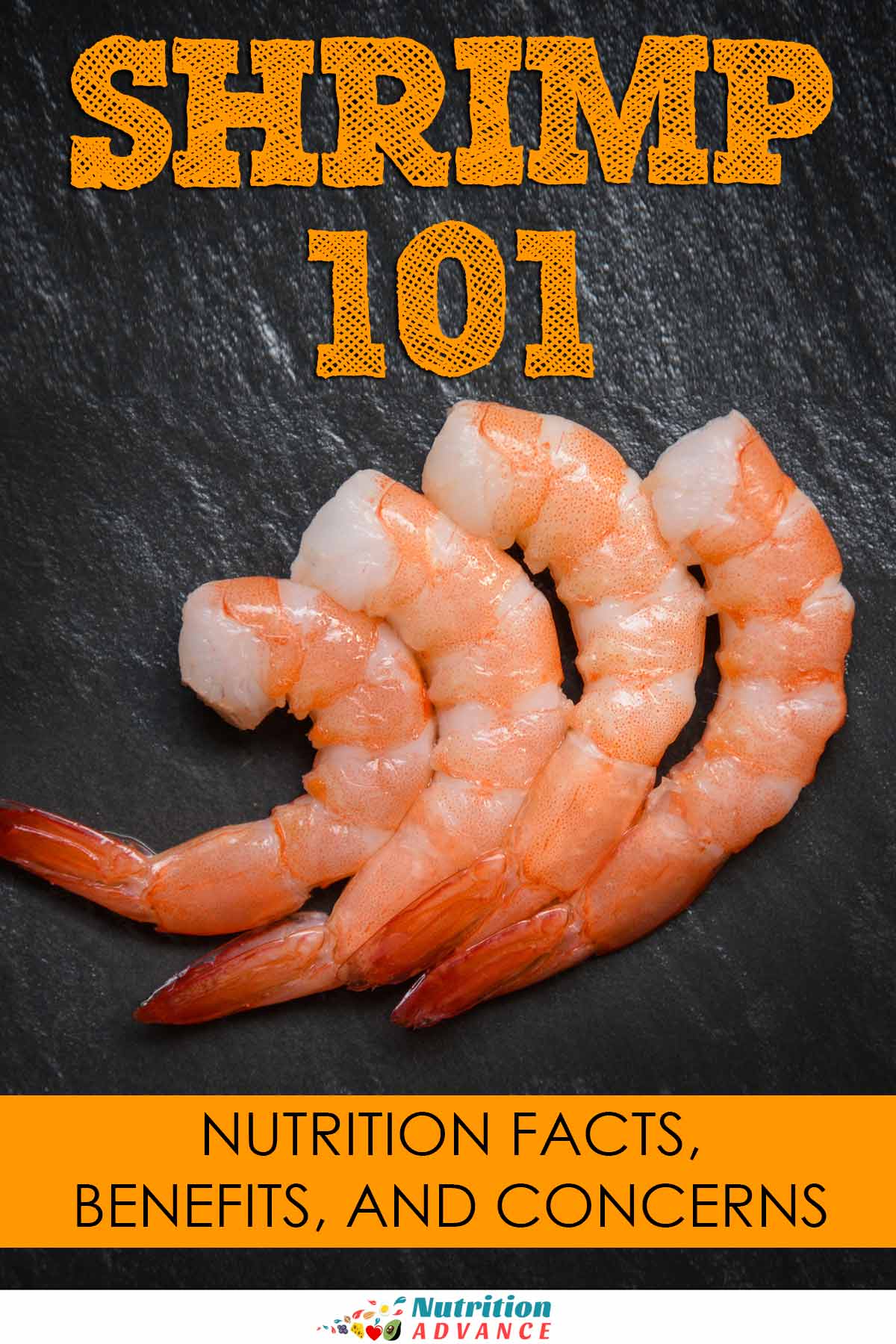 Shrimp is a small but nutritious type of seafood that is part of the crustaceans group of shellfish.

On the positive side, shrimp contains a broad range of essential nutrients, and it also offers some unique benefits.

However, there are also several concerns people have about consuming this seafood.

So, is shrimp a healthy choice?

In this article, we analyze the nutrition profile, health benefits, and potential concerns in full. 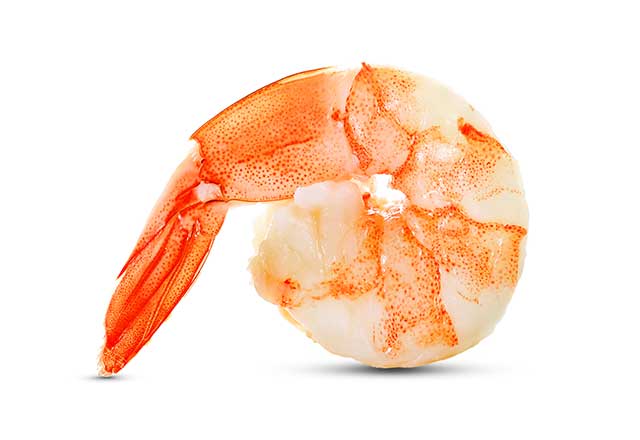 The following nutritional values are for 100 grams of shrimp in their raw state (1);

One hundred grams of shrimp is equivalent to roughly 3-4 large shrimp or 20 small shrimp.

Key Point: Shrimp offers a wide range of vitamins and minerals for very few calories. It is also a good source of omega-3 and protein. 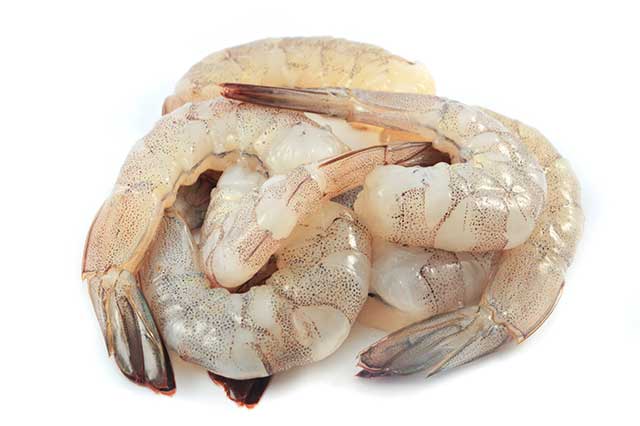 Shrimp have a wide range of beneficial nutrients and several other healthful characteristics.

Here are some of the primary health benefits they offer;

While this isn’t quite as high as oily fish, shrimp is still an excellent source of this essential fatty acid.

As a comparison, shrimp offers slightly more omega-3 than halibut, and more than double the omega-3 content of cod (2, 3).

Unfortunately, the majority of people are not consuming enough omega-3.

While there is no official recommended daily amount, an ‘adequate intake’ (AI) has been set at 1.6 grams for male adults and 1.1 grams for females (4).

The Importance of DHA and EPA

Additionally, the 2015-2020 Dietary Guidelines For Americans recommend at least 250 mg per day from DHA/EPA.

For those unaware, DHA/EPA is “preformed” omega-3 which, unlike ALA plant sources, does not require conversion for the body to use it (5).

Omega-3 possesses anti-inflammatory properties, and it is thought to lower the risk of chronic diseases like cardiovascular disease and some types of cancer (7).

Shrimp contains a major antioxidant compound called astaxanthin, which we can also find in other crustaceans like lobster, crab, and fish such as salmon (8).

On this note, cell culture studies show that astaxanthin taken from shrimp helps to reduce oxidative stress and causes the cell death of cancer cells (9).

While interesting, it should be noted that test tube studies are very different from what happens inside the human body, so we shouldn’t read too much into this.

However, clinical human intervention studies have demonstrated that astaxanthin has benefits for skin health.

Among these benefits, multiple studies show a reduction in wrinkles and improvements to skin texture and elasticity (10).

More human research is necessary to understand the potential benefits of astaxanthin better.

Key Point: Shrimp is one of the best sources of astaxanthin, a beneficial antioxidant carotenoid.

Frequently dubbed “the sunshine vitamin,” vitamin D is a hormone that is essential to human health.

Among its many benefits, vitamin D plays a significant role in metabolism, immunity, blood pressure regulation and disease prevention (12).

The best way to get vitamin D is safe sunlight exposure, but there are some good dietary sources too.

Key Point: Shrimp supplies 38% of the RDI for vitamin D per 100 grams.

4) Potentially Good For the Heart 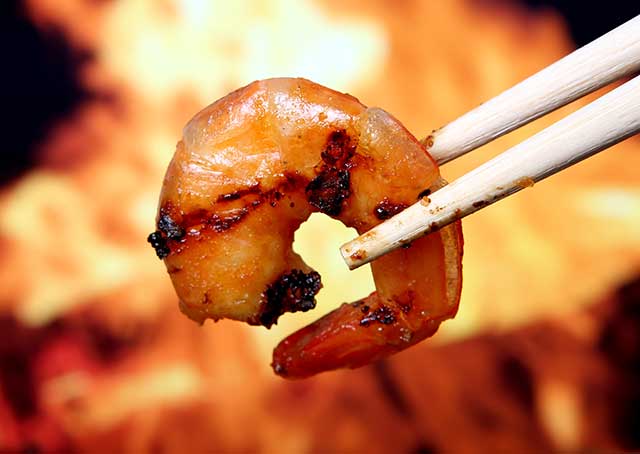 Is shrimp a heart-healthy food?

According to the existing evidence-base, it might just be that.

Despite previous worries over the cholesterol content of shrimp, the dietary guidelines recently dropped dietary cholesterol restrictions, noting that “cholesterol is not a nutrient of concern for overconsumption” (13).

The reason for this was an ever-increasing number of studies showing that dietary cholesterol doesn’t have a strong link to blood cholesterol.

For instance, recent systematic reviews have demonstrated that;

Additionally, in a randomized trial, a diet featuring large daily amounts of shrimp (300 grams) improved the LDL to HDL ratio and significantly decreased triglyceride levels by 13% (16).

5) Nutrient Density: Low In Calories, High In Vitamins and Minerals

As shown in the nutrition facts, shrimp offers a wide range of beneficial nutrients for minimal calories (106 kcal per 100 grams).

The more nutrient-dense foods we eat, the more beneficial nutrients we can get from our diet.

Among the nutrients shrimp offer, they are particularly high in selenium, supplying 57% of the RDI for the mineral.

Selenium acts as an antioxidant in the body, and it plays an important role in DNA repair, fighting oxidative stress, and strengthening the immune system (17).

Almost all seafood is an impressive source of nutrients, but mercury contamination is a common concern with seafood.

Due to pollutants from factories and coal plants, mercury can settle into oceans and rivers around the world. Unfortunately, this mercury can concentrate in fish and shellfish, which poses risks to the people who consume them.

While some seafood contains very high concentrations of mercury, such as shark and bigeye tuna, others contain very little.

On the positive side, shrimp has one of the very lowest mercury concentrations out of all seafood.

For instance, the mean mercury contamination is 0.009 PPM for shrimp. This figure compares favorably to even other low-mercury seafood such as salmon (0.022 PPM) and herring (0.078 PPM) (18).

Furthermore, shrimp contain a high ratio of selenium compared to mercury (higher than 1:1). Research suggests that selenium has a role in “mitigating the toxicity of mercury” (19, 20).

Key Point: Shrimp has lower mercury concentrations than almost any other seafood.

7) Shrimp Is High In Protein

Shrimp is an excellent source of protein; it contains more than 20 grams of the macronutrient per 100 grams.

While this may not sound as high as specific cuts of meat, shrimp are more protein-dense since they offer this high amount of protein for only 106 calories.

For example, here is how their protein density compares to beef, chicken, and eggs. All values are raw (1, 21, 22);

As the table shows, shrimp is one of the best dietary sources of protein.

For another protein-dense shellfish, see this guide to clams.

Iodine is an essential mineral that the human body needs to manufacture thyroid hormone (23).

Iodine deficiency can develop if iodine intake falls below 10-20 mcg per day, which can lead to hypothyroidism. A deficiency in iodine can be especially dangerous for infants and pregnant women (24).

In the United States, iodine intake has dropped by more than 50% since the 1970s, and iodine deficiencies are now present in some groups of people (25).

The best way to get iodine is from seafood, and shellfish and seaweed are especially good sources.

Amongst seafood, shrimp is one of the very best iodine sources, and a 3-oz serving (85 grams) provides around 35 mcg of iodine (26).

Note: for one of the best dietary sources of iodine, see this guide to abalone.

Shrimp is an excellent source of taurine, which is an amino acid with several potential health-protective properties.

Research on taurine from human clinical trials has demonstrated that it may potentially (27, 28, 29);

Seafood is the best dietary source of taurine, and shrimp offers the third highest concentration behind clams and octopus (30).

There are also a small number of potential drawbacks from shrimp consumption.

Here are two of the most common concerns.

Shellfish allergy is one of the most common allergies in the world. Allergic reactions to crustaceans can be particularly serious, which can be caused by shellfish such as shrimp and crab – and even products like crab sticks that contain small amounts of shellfish.

On this note, physician-diagnosed (or well-evidenced) seafood allergy is thought to affect around 2.3% of the population in the United States, which equates to millions of people (31).

The cause of this allergy appears to be a protein found in shellfish called tropomyosin. Shellfish allergy can result in severe reactions that have been known to cause serious adverse effects, and sadly, numerous deaths (32, 33).

Symptoms of an allergic reaction to shellfish may include facial swelling, difficulty breathing, a tingling feeling in the mouth, stomach cramps, and dizziness (34).

Anyone who suspects they are having an allergic reaction to shellfish should seek immediate medical attention.

Key Point: Shellfish proteins, found in shrimp, are a common allergen which can cause serious adverse reactions.

Although farmed shrimp from North America and Western Europe are strongly regulated, this is not the case for some imported Asian shrimp.

For instance, Vietnamese shrimp farming is particularly well-documented for using an excessive amount of antibiotics, some of which are illegal (35).

Worryingly, the FDA refused over 111 entry lines of shrimp imports in just one month in 2018. This refusal was due to the presence of potentially harmful (and banned) antibiotics and veterinary drug residues (36).

However, this asks the question of how many contaminated imports actually do pass into the country.

With this in mind, it may be better to focus on domestic shrimp rather than imported products. For peace of mind regarding potential antibiotics and contaminants, wild-caught shrimp are a good choice.

Key Point: Imported farmed shrimp from Asia are noted for having issues with banned antibiotics.

Shrimp are an excellent source of nutrition, and they offer a significant number of beneficial compounds for very few calories.

Overall, this small shellfish is a great way to increase our intake of omega-3 and protein.

Consuming shrimp should also significantly improve the nutrient density of most diets.

For more on shellfish, see this guide to oysters.

Crab Meat: A Guide To Its Nutrition Facts and Benefits

What Is Abalone and Is It Good For You?