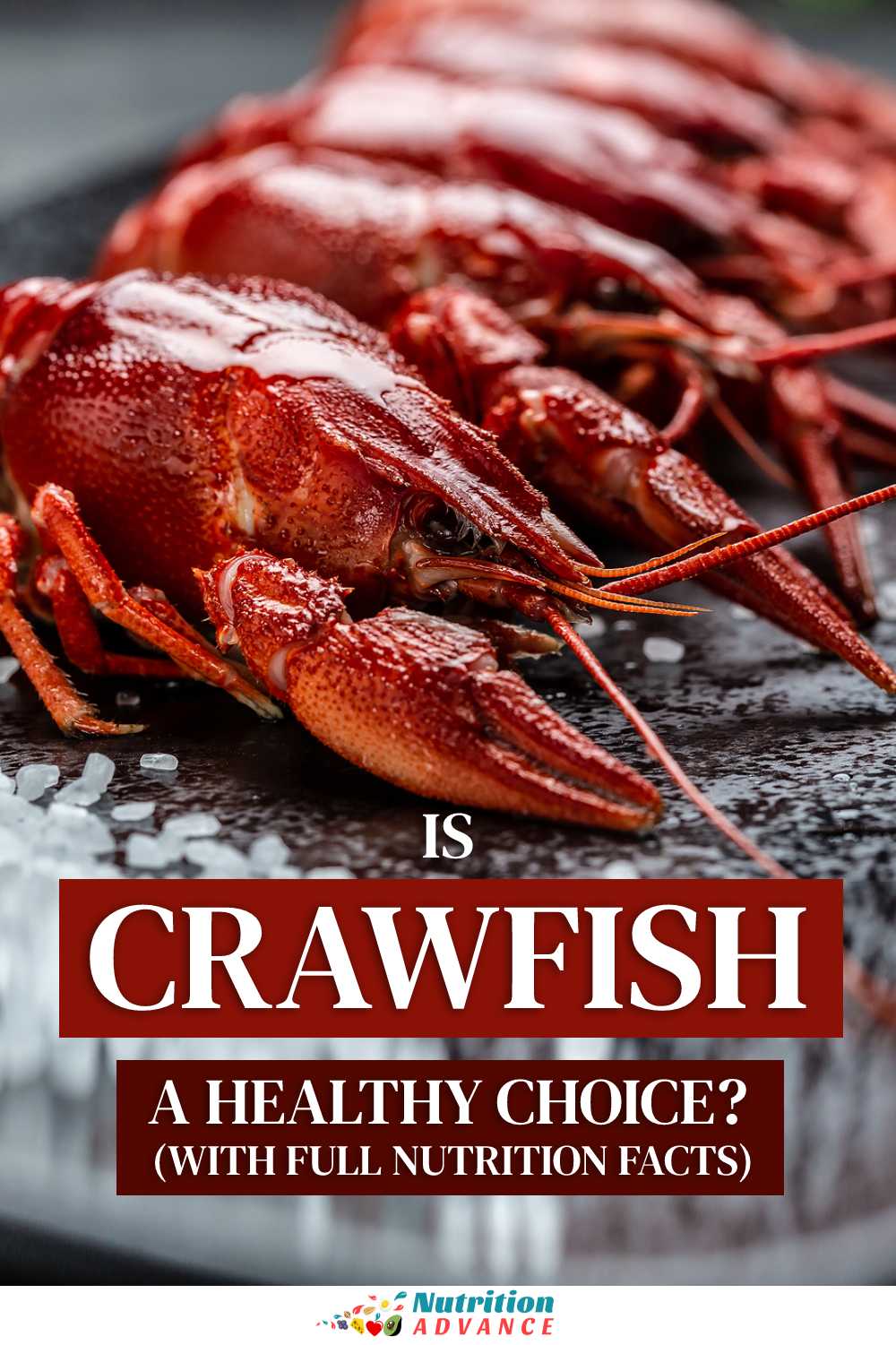 Crawfish is a small shellfish that belongs to the same crustacean group as crabs, lobsters, and shrimp.

However, what exactly is crawfish, and is it a healthy seafood choice?

This article provides a complete nutritional breakdown of crawfish and examines its potential benefits and downsides.

Crawfish, also known as crawdad and crayfish, is a crustacean shellfish belonging to the decapod order (1).

In terms of appearance, crawfish looks like a baby lobster due to its small size. While it shares similar features to a lobster, the size is closer to that of a shrimp. Most adult crawfish have a length of approximately 7.5 cm (3 inches) (1).

However, there are more key differences between crawfish and other members of the crustacean group. For instance, most crustacean shellfish, such as crab, lobster, and shrimp, live in salt water.

In contrast, most species of crawfish are freshwater creatures that live in rivers, lakes, swamps, and marshes (1).

Humans have used crawfish as food for thousands of years, with fossils suggesting they were consumed at feasts 28,000 years ago (2).

Louisiana in the United States is another central production area of crawfish, with an annual production of around 130-150 pounds (4).

Crawfish provide an excellent source of protein and a broad range of vitamins and minerals.

Key Point: Crawfish is a type of crustacean shellfish used for culinary purposes. It is related to lobster and has a similar, but much smaller, appearance.

The source of the nutritional data is the USDA; daily values have been calculated using USDA data and the FDA’s published daily values (5, 6).

Key Point: Crawfish contains high amounts of protein, a small amount of fat, and no carbohydrates. It also provides a broad range of vitamins and minerals.

Based on its nutritional profile, here is a summary of the key benefits of crawfish.

Rich In Nutritional Value (and Very Low In Calories)

The nutritional data shows that crawfish provides protein and a wide range of vitamins and minerals for very few calories.

With only 87 calories per 100-gram (3.5-ounce) serving, crawfish represents a simple, low-calorie way to increase the intake of numerous essential nutrients (5).

High Levels of Copper and Selenium

Crawfish contains many micronutrients, but the two most concentrated are the essential minerals copper and selenium.

Selenium is an essential mineral that plays a vital role in the immune system, DNA production, and keeping the body healthy (7).

Copper also has a critical role in human health, and its functions include energy production and roles in the nervous and immune systems (8).

An Excellent Lean Source of Protein

Crawfish is an excellent lean source of protein, meaning that it supplies a large amount of protein relative to its calorie provision.

This protein density compares favorably to many other protein sources, including some types of meat and legumes.

As a result, crawfish is an excellent option for those trying to increase their protein intake without adding many extra calories.

Although the amount is relatively small, it is also worth noting that crawfish provides some omega-3 fatty acids.

The type of omega-3 fatty acids found in crawfish are eicosapentaenoic acid (EPA) and docosahexaenoic acid (DHA). EPA and DHA, as they are commonly referred to, are the preformed and most bioavailable forms of omega-3 (9, 10).

A wide range of research supports EPA and DHA as beneficial for heart health and reducing cardiovascular mortality (11, 12, 13, 14).

Note: Oily fish offers higher levels than other seafood for anyone trying to increase their omega-3 intake.

Heavy metal contamination is a concern with seafood (and all food in general).

However, the heavy metal contents of different seafood can vary significantly.

Firstly, based on mercury data collected from forty-six samples of crawfish between 1991 and 2007, crawfish contained low mercury levels.

The mean mercury concentration among these 46 samples was 0.033 PPM, which compared favorably to seafood, including (15):

That said, mean mercury levels were higher than the lowest mercury seafood, such as clams, shrimps, oysters, and sardines.

A study published in 2017 examined the distribution of arsenic and other heavy metals in crawfish produced in Louisiana, United States (16). The findings from this study concluded that all heavy metals found within crawfish tissue were at acceptable levels for human consumption.

Key Point: Crawfish offers several benefits: it provides large amounts of protein, vitamins and minerals, and it is low in calories. It also supplies a small amount of omega-3

However, it is worth noting that, depending on the context and the individual, it can also have potential downsides.

Notably, allergy to crustacean shellfish is far more common than shellfish like oysters and clams (mollusks) (21).

With this in mind, people with crustacean allergies should avoid crustacean species such as crawfish, crab, lobster, and shrimp.

If anyone suspects they may have a crustacean allergy, they should speak to their doctor to get an accurate diagnosis.

How To Use Crawfish

Like shrimp and other crustacean shellfish, crawfish can be a versatile ingredient that fits into numerous dishes.

Crawfish can be eaten by itself, or it can feature in dishes such as:

Here are the answers to some common questions about crawfish, their characteristics, and their nutritional values.

Are crawfish high in cholesterol?

How do crawfish compare nutritionally to shrimp?

Crawfish and shrimp have relatively similar nutrition profiles. This is because both shellfish are a lean source of protein. However, the main difference is that shrimp has a slightly higher protein content while also being higher in calories (5, 23).

Is crawfish high in fat?

No, crawfish contains minimal levels of dietary fat. Per 100 grams cooked, the shellfish has only 1.3 grams of fat.

What are the main benefits of eating crawfish?

The main benefit of crawfish is that it provides a good amount of protein, selenium, copper, and several other micronutrients for a very small calorie provision.

How should you store crawfish?

Like other shellfish, crawfish spoil very quickly, even when refrigerated. For this reason, they are usually eaten as close to fresh as possible. However, frozen crawfish purchased from reputable seafood vendors can be stored in the freezer for a longer time. When buying crawfish or any shellfish variety, it is important to follow the storage instructions on the pack for food safety purposes.

Crawfish is not quite as well-known as other shellfish like shrimp and lobster.

However, it has similar taste characteristics, and it is just as nutritious.

There are not many foods that match crawfish as a lean source of protein that provides significant vitamins and mineral content.