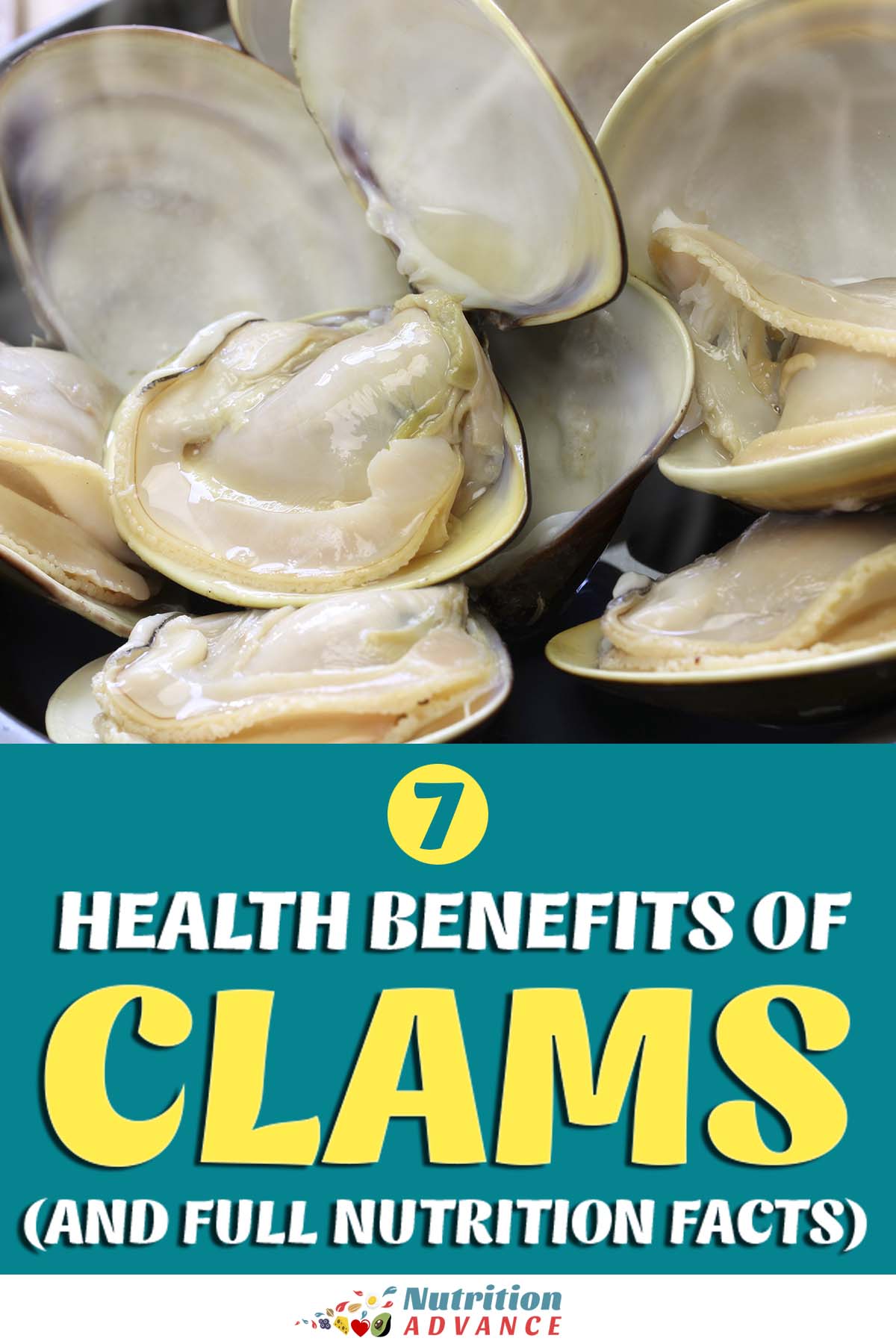 Clams are bivalve mollusks, which refers to a type of seafood enclosed by a shell.

This shellfish (usually) lives on the sandy ocean floor, and it features in most cuisines around the world.

This popular shellfish offers exceptional nutrient density, and they are full of beneficial vitamins and minerals.

In this article, we will examine some of the impressive benefits that clams provide.

We will also look at the potential drawbacks of clams, and the best ways to eat them.

First of all, clams are not just one thing.

In fact, there are thousands of different species of clam around the world, and they can wildly vary in shape and size.

Interestingly, some species of clam have a lifespan of one year, while others can live for up to 500 years (2).

Clams live inside two shells held together by a ligament and hinge joint. They are quite similar to scallops in appearance and nutritional properties.

As previously mentioned, clams are a type of mollusk (other mollusks include cockles, mussels, oysters, and abalone).

Clams have a hard-to-describe taste, but they are very flavorful, and they have a salty and slightly fishy taste.

The texture is soft, chewy, and almost buttery.

Key Point: Clams are a unique type of shellfish and they are very nutritious.

Clams are one of the most nutritious foods in the world, and they offer an exceptional range of nutrients.

The table below shows the full nutrition profile for clams per 100 grams raw (3).

Key Point: Clams are packed with nutrients, and they are especially high in iron and vitamin B12.

Here is a look at some of the most significant benefits that clams offer.

1) Exceptional Source of Vitamin B12

Clams are one of the best dietary sources of vitamin B12, and they offer an impressive 824% of the reference daily intake (RDI) per 100 grams.

Most people view beef as being high in B12, which it is, but as the table below shows, clams provide far more of the vitamin (4);

Vitamin B12 is crucial for human health, and amongst its functions, it plays a vital role in (5);

Key Point: Clams contain more vitamin B12 than almost any other food.

Oily fish such as mackerel, salmon, and sardines are the best dietary sources of omega-3.

However, shellfish offer a fair amount of this essential fatty acid too.

Docosahexaenoic acid (DHA) and eicosapentaenoic acid (EPA) are the most bioavailable forms of omega-3. Our body can use them more efficiently than the omega-3 (ALA) in nuts and seeds (6).

Maintaining good tissue levels of omega-3 fatty acids is important for our health, and research suggests that a higher intake may help to lower inflammation levels (7, 8, 9).

Following vitamin B12, the second most concentrated micronutrient in clams is iron.

Iron is necessary for a wide range of metabolic processes, and it plays an essential role in oxygen transport (10).

Ensuring a sufficient iron intake is also crucial for the prevention of anemia. Unfortunately, iron-deficiency anemia is an increasing problem in both the developed and undeveloped world.

For instance, approximately 10 million people have an iron deficiency in the United States (11).

Furthermore, a recent study found that 48% of UK schoolgirls aged 11-18 had a dietary intake of iron below recommended levels. Among these girls, 5% of them had iron deficiency anemia (12).

While many people think that vitamin C only comes from fruit, there are a wide variety of foods that provide it.

For instance, leafy green vegetables tend to contain more of the vitamin than fruit.

However, some animal foods—particularly certain organ meats and shellfish—can also be a good source of vitamin C.

Clams are an excellent lean source of protein, and they provide 12.8 grams per 100 g.

While this may not sound like a lot compared to meat, it is worth pointing out that 100 grams of clams only contains 74 calories.

To show this, the table below uses 80% lean beef again as a comparison;

Although clams don’t contain as much protein per gram as beef, they contain a far higher amount per calorie.

Clams are an outstanding protein source for anyone trying to either restrict calorie intake or get more protein-dense foods into the diet.

Key Point: Clams have a better protein density than almost any other food.

6) Clams Are a Good Source of Choline

Choline is not a vitamin, but it is a vitamin-like compound (and an essential nutrient) that plays an important role in health.

For one thing, an adequate intake of choline is important for liver health and appears to be protective against fatty liver disease (13, 14).

Additionally, choline is necessary for the production of a neurotransmitter called acetylcholine. This compound also has benefits for memory and overall brain function (15).

You may have heard eggs mentioned as the best source of choline; one large egg provides 147 mg (16).

However, clams are also an excellent source, and a 6-oz serving offers 110 mg of choline (17).

Key Point: Clams are one of the best dietary sources of choline.

7) Rich In Iodine and Selenium

Lastly, clams contain good amounts of a wide variety of vitamins and minerals.

However, among these, two of the most important are iodine and selenium.

Dietary intake of both of these minerals has been decreasing over recent years, and research suggests that iodine deficiency has re-emerged in some US population groups (18, 19).

Key Point: Clams are rich in iodine and selenium.

Health Risks and Side Effects

Unfortunately, there are also a few risks and potential side effects to be aware of with clams.

However, it is worth noting that most shellfish allergies are to members of the Crustacea family such as crab and shrimp (21).

Despite this, clams are the fourth most common cause of a shellfish allergic reaction after shrimp, crab, and lobster (22).

Severe allergic reactions (anaphylaxis) can be serious and life-threatening.

For this reason, anyone with an allergy to any shellfish should speak with their doctor before trying clams.

Key Point: Allergic reactions to shellfish can be serious, and clams are the fourth biggest cause of reactions among shellfish.

Shellfish such as clams are one of the most common causes of food poisoning. They can potentially cause the following conditions (23);

Food poisoning largely comes from clams infected by marine toxins made by organisms called dinoflagellates, which are similar to algae. Unfortunately, these toxins are not sensitive to heat, and cooking does not destroy them (24).

However, safely sourcing any clams you buy should make such risks extremely low. Reputable restaurants and grocery stores will not source their clams from contaminated waters.

A disease called vibriosis can also infect clams, which can cause severe gastrointestinal and neurological symptoms when passed to humans.

The best way to protect against foodborne illnesses like vibriosis is to avoid raw/undercooked clams and to ensure everything is fully cooked (25).

Furthermore, the US National Library of Medicine advises avoiding seafood found around waters contaminated with large amounts of dinoflagellates and avoiding seafood during the summer months (23).

Once again, safely sourcing clams should minimize these risks.

Key Point: Clams can be a food poisoning risk, especially if they are raw or undercooked.

On the positive side, clams have the second-lowest concentrations of mercury contamination among all seafood (26).

In other words; they are cleaner than oysters, salmon, sardines, anchovies, and almost every other type of seafood.

Key Point: Clams are a relatively “clean” seafood. However, like all seafood, China-sourced clams may be problematic.

This nutritious shellfish is incredibly protein-dense, and alongside liver, it is the most significant dietary source of vitamin B12. Clams are also loaded with beneficial minerals like iron and selenium.

While clams do have some downsides, these can be negotiated by buying from reputable sources.

Overall, alongside oysters and organ meats, no other animal foods compare to the nutrient profile of clams.

Clams are one of the most nutrient-dense foods available.