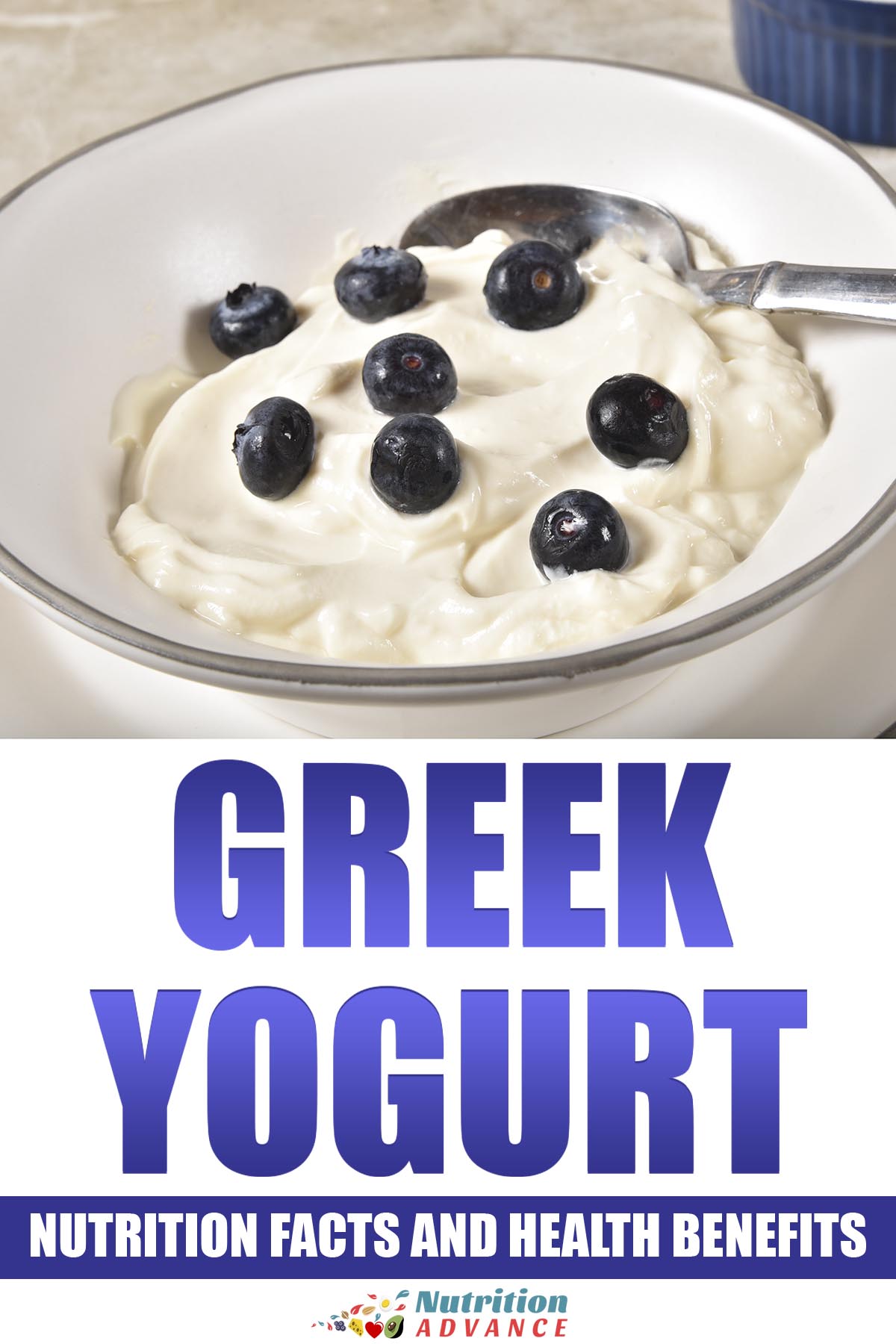 Greek yogurt is a creamy dairy product made by straining whey and lactose from regular yogurt.

As a result, it has a thicker texture and contains more protein and less sugar.

What Is Greek Yogurt? 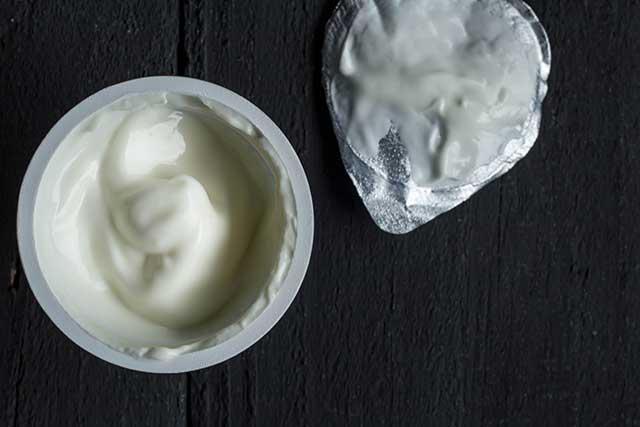 Once the yogurt is ready, more work needs doing.

The next stage requires for the whey liquid to be separated from the yogurt.

There are several ways of doing this, but the typical method used by most producers is centrifugal separation.

To do this, the producers run the yogurt through a centrifuge until the milk solids concentrate. At this stage, the leftover (liquid) whey is removed (2).

Since this process leaves a more concentrated yogurt, Greek yogurt is also higher in protein than regular yogurts (3, 4).

Providing it is plain Greek yogurt, the taste should be sour and tangy.

For those that don’t mind a slightly sour taste, Greek yogurt is delicious.

The taste of Greek yogurt is somewhat similar to sour cream, but nutritionally they are very different.

Key Point: Greek yogurt is a thick and creamy dairy food that is higher in protein and lower in lactose than regular yogurts.

The table below shows the nutritional values for whole milk Greek yogurt per container (200-gram) serving (5).

These nutrients are shown, per 200-gram serving, in the following tables (3).

*Choline has an ‘adequate intake’ (AI) level rather than a set reference daily intake (RDI). This is because there is inadequate data to calculate a recommended intake (6).

Key Point: Greek yogurt is an excellent source of protein, B vitamins, calcium, and selenium.

Due to its nutrient composition and the compounds it contains, Greek yogurt may have various health benefits.

1) An Excellent Source of Protein

Since Greek yogurt has a higher concentration of milk solids than regular yogurt, it also contains a greater amount of protein.

For this reason, Greek yogurt is one of the best dairy sources of protein, and it compares favorably to milk and other yogurts.

With one container (200-gram) of Greek yogurt offering 18 grams of protein, you would need to drink 2-3 cups of milk to get the same amount.

All in all, this delicious yogurt is an excellent option for anyone looking for a protein-dense snack.

For another high-protein dairy option, Skyr may also be worth a look.

2) Greek Yogurt Is a Rich Source of Calcium

Per container, Greek yogurt offers 222 mg of calcium, which is 22% of the recommended daily intake.

Calcium is an essential mineral that is also the most abundant mineral within the human body (7).

This mineral also plays a significant role in bone health and helping to retain bone mass density as we age (8).

In addition to its protective role in skeletal health, calcium is also a necessary nutrient for vascular contraction.

On this note, some studies suggest that calcium may have a beneficial effect on lowering blood pressure, but the research is inconsistent, and higher quality studies are necessary to confirm this (9). 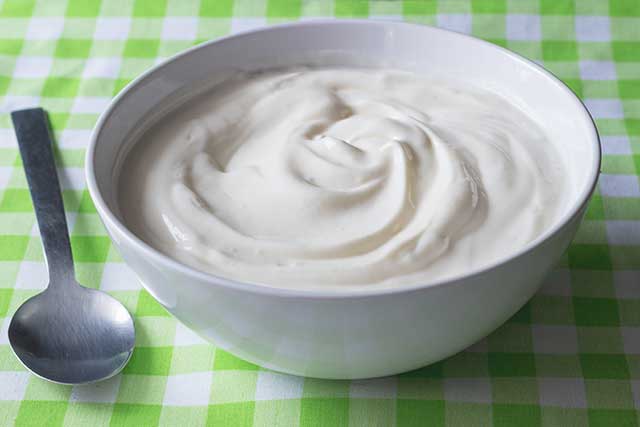 The probiotics contained in this yogurt include (1);

First of all, human trials have demonstrated that these bacteria survive digestion and can be found in human feces several days after ingestion (10).

There is also evidence that they have a positive impact on gastrointestinal health.

For example, in animal studies, long-term yogurt intake increases the ratio of Bacteroidetes to Firmicutes in the gut, which are two types of bacterial strains (11).

Interestingly, human microbiome studies show that obese and overweight subjects have a higher amount of Firmicutes and a lower amount of Bacteroidetes (12).

In other words; long-term yogurt intake may lead to beneficial microbiome changes that may be a factor in helping to prevent obesity (13).

However, research into the human microbiome is an emerging field, and more research is necessary to confirm these potential benefits.

For those interested in probiotics, other fermented dairy products such as buttermilk and kefir will also have these potential benefits.

Key Point: The probiotic bacteria in Greek yogurt may lead to a healthier microbiome, which could have a positive impact upon general health.

4) Greek Yogurt Is High In Vitamin B12

Vitamin B12 is an essential vitamin, but unfortunately, vitamin B12 deficiency is widespread in recent times.

For instance, more than 6% of adults in the United States and the United Kingdom have a vitamin B12 deficiency. In the over-60 age group, this figure rises to more than 20%, and much larger numbers of the population have a marginal deficiency (14).

On the positive side, dairy foods such as Greek yogurt provide a moderate amount of this vital vitamin.

Vitamin B12 has numerous important functions within the human body, and it is responsible for producing and regulating DNA. It also plays a key role in energy production and the formation of red blood cells (16).

Key Point: Greek yogurt is an excellent source of vitamin B12.

5) May Have Benefits For Oral Health

Some (limited) research suggests that the probiotics in Greek yogurt may have a positive effect on oral health.

In a systematic review and meta-analysis of 24 studies, probiotic sources of dairy increased the PH of saliva and reduced counts of Streptococcus mutans, a “bad” bacteria that promotes tooth decay (17).

However, it is worth noting that the research in this area is limited, and more studies are necessary to prove these potential benefits.

Key Point: Studies suggest that probiotic bacteria in yogurt may improve the balance of good/bad bacteria in the mouth.

6) May Promote Satiety and Appetite Control

Research shows that Greek yogurt may have a beneficial impact on satiety levels.

Satiety refers to the feeling of satisfaction—and not feeling hungry—after a meal. On this note, a randomized trial showed that Greek yogurt might have a beneficial satiating effect.

In this study, an afternoon snack of Greek yogurt led to reduced hunger, better satiety levels, and a longer time before subsequent eating compared to calorie-matched, lower protein snacks (19).

A further randomized study found that in twenty healthy female participants, a mid-afternoon yogurt led to greater feelings of fullness than a calorie-matched cracker or chocolate snack. Additionally, the women who ate the yogurt consumed around 100 calories fewer at dinner compared to the cracker and chocolate group (20).

However, this is likely due to the protein content rather than Greek yogurt having any unique satiating properties.

Dietary protein is widely thought to be the most satiating of the three macronutrients (21).

Numerous systematic reviews and meta-analyses suggest that fermented dairy products, such as Greek yogurt, may be good for the heart;

However, it is important to remember that these are observational studies. In other words, correlation doesn’t prove causation. 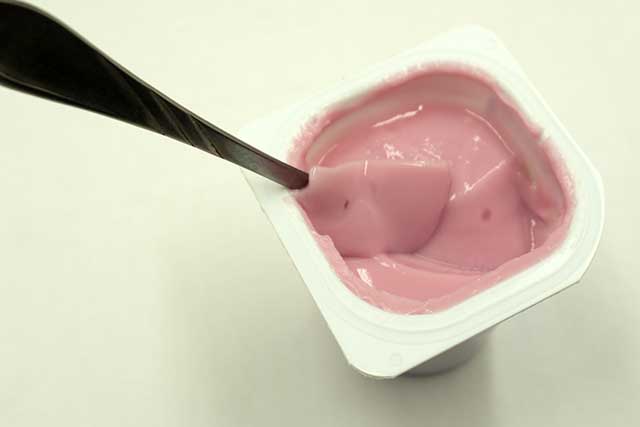 While the health benefits of Greek yogurt are clear, there are also some potential concerns to know.

Although plain Greek yogurt is very healthy, opting for a heavily processed brand may cancel out these health benefits.

For example, a regular plain Greek yogurt naturally contains only three grams of sugar per 100 grams (5).

On the other hand, more processed options, such as this lime-flavored yogurt, contain four times the amount of sugar as well as various additives.

For health purposes, it is better to opt for plain Greek yogurt and add any extra ingredients (such as real fruit) at home.

2) May Cause Problems For People With Lactose Intolerance

As previously mentioned, Greek yogurt contains a lower amount of sugar than other dairy products.

Since some of the lactose is strained out during the process of making the yogurt, there are only three grams of lactose per 100 g.

This lactose content is significantly less than regular yogurt and whole milk, which both contain around 5 grams of lactose (25, 26).

Since there are substantial variabilities in the extent to which people suffer from lactose intolerance, this reduced lactose content could make a difference for many people (27).

For this reason, people with slight sensitivities to lactose may better tolerate Greek yogurt compared to other dairy options.

However, it is still possible that Greek yogurt could cause problems for people.

Individuals with strong adverse reactions to lactose-containing foods may have to avoid Greek yogurt.

For those that enjoy regular yogurt, Greek yogurt offers more of the same – just with a thicker and creamier taste.

This delicious dairy food also has the benefit of offering more protein and less lactose, which could make it a favorable choice for many people.

Just be aware that there are many Greek yogurt products out there, and most of them are full of sugar and unnecessary additives.

In contrast, plain Greek yogurt appears to have numerous health benefits, and it tastes great too.