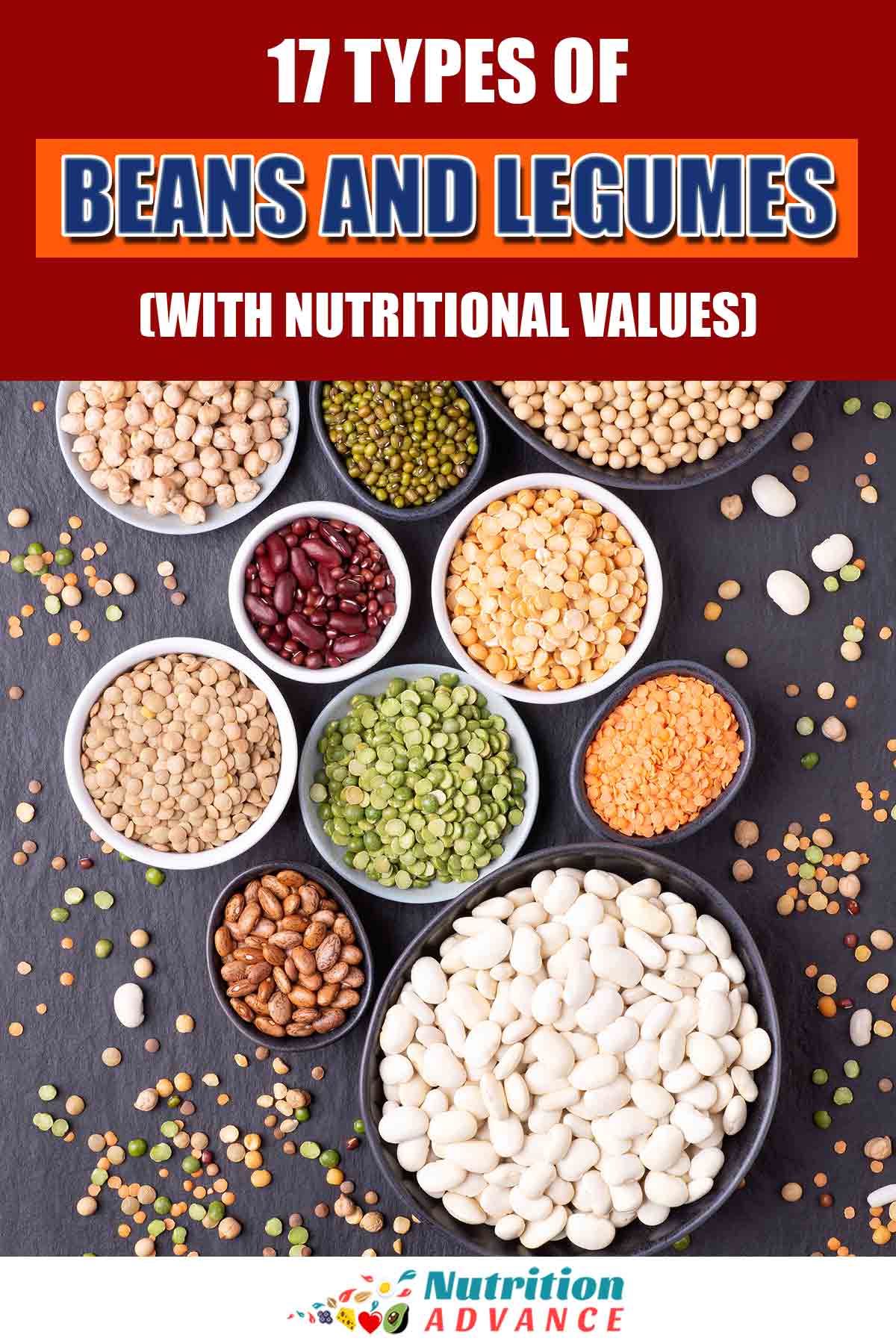 Legumes are a nutritious type of food, and they are a staple around many parts of the world.

The word ‘legume’ refers to any plant from the Fabaceae family of plants.

In dietary terms, a legume refers to the edible fruit or seed of the plant, and it includes beans, chickpeas, lentils, peas, pods, and more.

Although the terminology can be confusing, legumes and pulses have different meanings. Legumes are the overall group, while pulses are the dried seeds from legume plants (such as kidney beans, lentils, and split peas).

This article examines common varieties of legumes and their nutritional values, using data from the USDA FoodData Central database.

For each legume variety, you can see its basic nutritional profile.

While adzuki beans are commonly red, they can come in a wide range of colors.

Nutritionally, adzuki beans are a rich source of fiber and protein.

See this review of the nutritional benefits of adzuki beans for a complete guide.

Although they have a different taste to yellow soybeans, black beans are used in a similar way.

These beans feature in a wide range of foods, from black bean natto to black bean soy milk.

Despite looking very similar to black soybeans, the black turtle bean is native to the American continent and slightly smaller.

It is slightly different nutritionally too. The nutritional values for 100 grams of dried black turtle beans are as shown below (3):

Black turtle beans are a common ingredient in Mexican cuisine.

Black-eyed peas are also known as cowpeas, and they originated in the African continent (4).

This popular legume has white skin with a small black “eye” area. Despite the ‘pea’ part of the name, black-eyed peas are a bean.

Regarding their nutritional values, 100 grams of dried black-eyed peas supplies (5):

See this full guide to black-eyed peas for more information

In their homeland, they are one of the most common legumes.

Borlotti beans have a speckled appearance with a beige base color under streaks of red/pink.

Cannellini beans are a widespread variety of white bean. Additionally, they are the largest common white bean.

The above picture shows that cannellini beans are large, oval-shaped, and bright white.

The beans are a variety of kidney beans, and they are relatively similar to red kidney beans nutritionally.

See this complete nutritional guide to cannellini beans for more information on their properties.

Chickpeas have an interesting appearance, and they look somewhat similar to nuts.

These legumes are otherwise known as garbanzo beans, and they are thought to have originated in the Middle East (8).

Chickpeas remain immensely popular in their place of origin, and they feature in a wide range of condiments, curries, and other dishes. Additionally, they are the primary ingredient in the famous condiment hummus.

In addition, chickpeas are a significant source of manganese, folate, and copper.

See this complete nutritional guide to chickpeas for more information.

Edamame is the name for immature (green) soybeans that grow within their pod.

While edamame is technically a legume, it is often sold or served as a vegetable.

Edamame is available worldwide, but it is particularly prevalent in Japanese cuisine. It also works well within stir-fries.

According to the USDA data entry for frozen edamame, 100 grams provides the following nutritional values (10):

Edamame offers a broad range of vitamins and minerals, and it is high in folate.

Fava beans are also known as broad beans, and they are available to buy fresh or dried.

These beans are quite nutritious, and they offer a good amount of protein, fiber, copper, folate, and manganese (11).

Despite most people thinking green peas are a vegetable, they are a type of legume.

However, unlike most legumes, peas are usually consumed in their fresh and immature green form.

Although similar to cannellini beans in taste and nutritional value, Great Northern beans are slightly smaller.

Similar to other white bean varieties, Great Northern beans are an excellent source of fiber and protein.

Here are the nutritional values for 100 grams of dried Great Northern beans (13):

However, red kidney beans are by far the most common variety.

Interestingly, kidney beans take their name through their shape, color, and resemblance to a real kidney.

Kidney beans are among the most nutritious legumes, and 100 grams of dried beans contains (14):

Lentils are one of the most popular legumes, and they come in colors ranging from green and black to orange and yellow.

These legumes commonly feature in dishes worldwide, including lentil soup and various curries.

It is relatively easy to find them for sale in either dried or canned form.

In some parts of the world, this legume is more commonly referred to by ‘butter beans.’

Lima beans are a good source of nutritional value, and they are high in copper, folate, and thiamin (16).

The beans offer the following nutrition profile per 100 grams dried (16):

Lupin beans, also known as lupini beans, have been part of the human diet for thousands of years.

These beans are also the most nutritionally unique legumes.

This uniqueness is because they have a relatively low carbohydrate content compared to other dried legume varieties. However, despite this, they are incredibly high in fiber and protein.

See this complete guide to lupin beans and their nutritional benefits for more information.

These small green beans are particularly rich in folate, and they supply a good range of nutrients.

Per 100 grams, dried mung beans have the following nutritional values (18):

See this nutritional guide to mung beans for more information.

Navy beans are fiber-rich, a good protein source, and an excellent source of folate.

Notably, many tinned legume products use navy beans, such as Baked Beans.

Per 100 grams, here are the nutritional values for dried navy beans (19):

Peanuts are mostly thought of as a variety of nut.

However, botanically peanuts are classed as a type of legume.

That said, peanuts’ nutritional profile is slightly different from most legumes.

For one thing, peanuts are relatively low in carbohydrates and contain high amounts of dietary fat (and calories).

Per 100 grams, the basic nutritional profile of peanuts is as follows (20):

Pinto beans are small legumes with a beige color speckled with brown bits.

These beans are particularly popular in Spanish cuisine, known locally as ‘frijol pinto’ (21).

These peas are slightly different from regular garden peas as they have edible pods.

Thus, people can eat the whole pea-containing pod, which contains several peas, as one.

Soybeans are one of the world’s staple foods, and they are the most common plant-based protein source (24).

There are a wide variety of soybean-based foods consumed around the world. Some of the most popular include:

Some of these foods are traditional fermented soy dishes, while others are more modern processed options.

As for regular soybeans, their nutritional values per 100 grams (dried) are as follows (25):

As shown above, soybeans are a rich source of protein, and they also provide a moderately high amount of dietary fat.

Split peas look slightly like lentils, but they are an entirely different type of legume.

Split peas are simply mature green peas that have been dried and had their skin peeled. After this, they are “split” into two halves.

There are also two different colors of split pea: green and yellow.

In terms of nutritional value, split peas provide the following profile per 100 grams (26):

The table below shows an at-a-glance comparison of how each legume compares nutritionally per 100 grams.

What Benefits Do Legumes Have?

Firstly, all legumes tend to be a good source of protein and fiber.

However, specific legumes may provide certain nutrients in higher amounts than others, depending on their unique nutritional profile.

Here are some guides to popular legumes that show their complete nutritional profile, as well as a summary of scientific research findings:

What is the difference between beans, legumes, and pulses?

Understanding the difference between beans, legumes, and pulses can be confusing. First of all, pulses are the edible seeds of legume plants, including beans, lentils, and peas. A bean is one type of edible seed and a type of legume, but not all legumes are beans. Finally, legumes are all beans, pulses, leaves, and pods from plants in the legume (Fabaceae) family.

Which legume is the best for me?

Which legume is “the best” depends on what someone is looking for and personal preference. It is best to look at the nutritional values of each legume and see which one offers the desired characteristics.

Which legume has the highest protein?

According to the USDA FoodData Central database, fava beans, lupin beans, and soybeans contain the most protein.

Which legumes have the most fiber?

According to the USDA FoodData Central database, the three legumes with the highest fiber content are borlotti beans, (dried) fava beans, and split peas.

Which legumes have the lowest calories?

This guide covered a broad range of the different varieties of legumes.

These legume options are nutrient-rich, offer unique nutritional profiles, and can benefit most people’s diets.