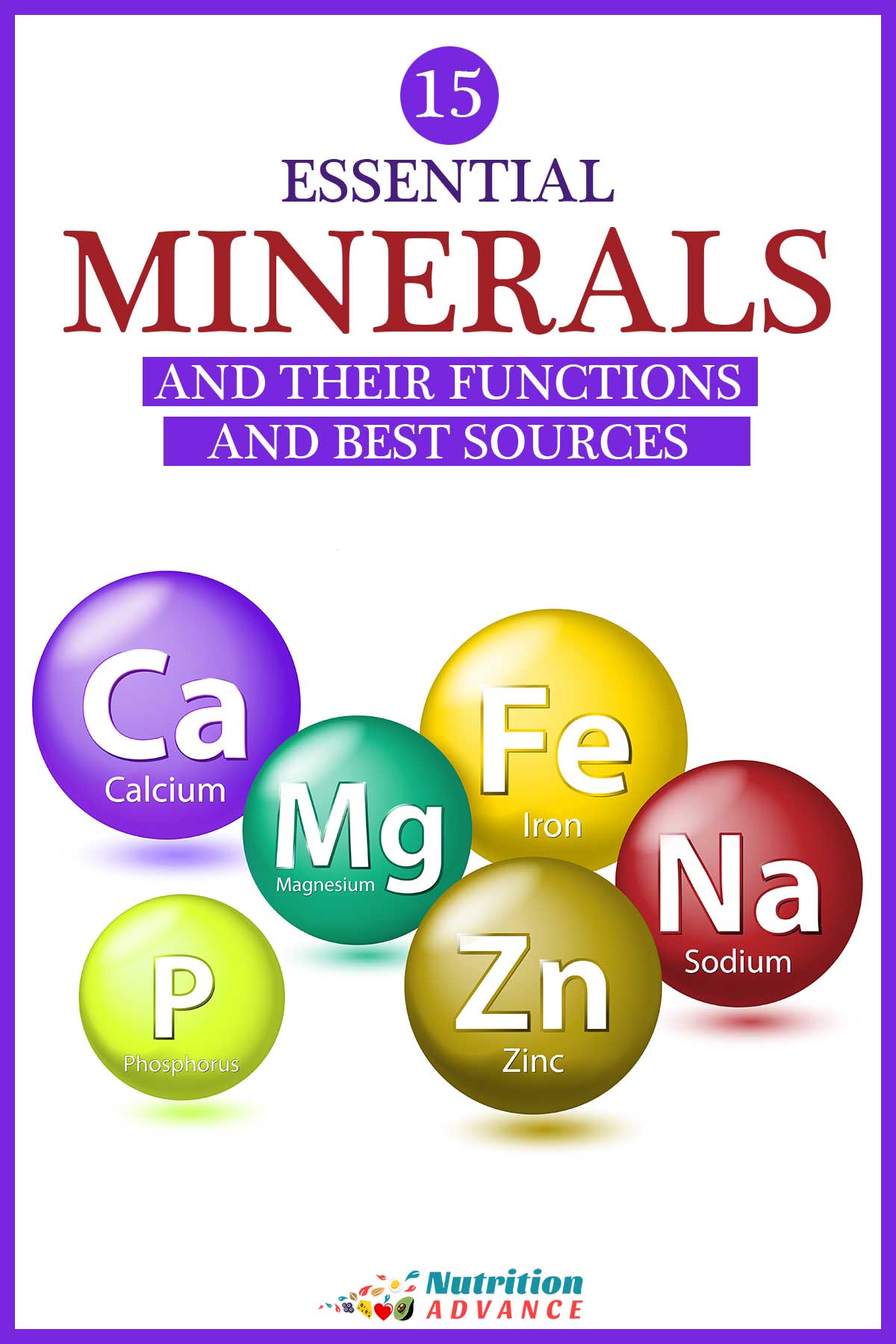 Essential minerals all play an important role in human health.

Depending on the quantity of each mineral that the human body needs, they can be classed as either major minerals or trace minerals.

This article provides a guide to these essential minerals alongside their recommended daily allowance (RDA) and the best dietary sources.

Calcium is a major electrolyte mineral, and according to the Dietary Guidelines for Americans, it is one of the nutrients of concern alongside magnesium and vitamins D and E (1).

In other words, a large proportion of people do not consume enough calcium. According to the National Health and Nutrition Examination Survey (NHANES), over 40% of adults had an inadequate intake of these nutrients (2).

Calcium is the most prevalent mineral in the human body, and it plays a vital role in maintaining healthy bones and teeth (3).

Generally speaking, the best source of calcium is dairy foods. However, some non-dairy options are relatively high in the mineral.

Chloride is another major mineral, and it is also an electrolyte that plays a role in regulating fluids within the body (7).

Chromium is a trace mineral, and humans only require small amounts of this nutrient each day.

In the human body, chromium plays a role in the digestive breakdown and absorption of carbohydrates, fat, and protein (9).

Cobalt is another trace mineral, and the human body only requires minimal amounts each day.

However, this mineral is a component of vitamin B12 (cobalamin), so getting enough vitamin B12 will provide the requisite amounts of cobalt (12).

Copper is a trace mineral that is present in a wide range of different foods.

As a result, copper plays an important part in enzymes and proteins that ensure the optimal function of the cardiovascular system and the nervous system, among others (15).

For further information, here is a complete list of foods high in copper.

Iodine is a trace mineral, and it plays a vital role in producing thyroid hormones (18).

For this reason, it is possible for either excessive or insufficient iodine intake to adversely impact thyroid health (19).

It is thought that approximately two billion people are deficient in iodine globally (20).

Iron is an essential trace mineral that can be found in two different dietary forms (23):

Both can be good sources of the mineral, but heme iron is more bioavailable and can be a more reliable source if iron intake is only borderline sufficient (24).

A sufficient intake of iron is vital for producing hemoglobin, which is a compound that carries oxygen within the blood (25).

For this reason, inadequate iron intake is a risk factor for developing iron deficiency anemia (26).

More information on the functions of iron is available here.

See this list of foods high in iron for more iron-rich ideas.

Magnesium is a major electrolyte mineral, and it is another of the four nutrients of concern for inadequate intake (1).

On this note, research shows that around half of the US population consumes less than the recommended amount of magnesium (29).

Magnesium has many important functions within the body, and these include helping with the formation and maintenance of healthy bone tissue (30).

Additionally, maintaining adequate levels of magnesium is thought to be important for cardiovascular health (31).

For more magnesium-rich foods, here are twenty of the best sources.

Manganese is an essential trace mineral that the body requires in relatively low amounts.

It is also one of the most prevalent minerals in food, and a wide range of plant-based and animal-based foods contain it.

Manganese is a co-factor for several important enzymes, including superoxide dismutase and arginase (34).

Superoxide dismutase is an enzyme located in the body’s mitochondria that protects against oxidative damage. Hence manganese plays a crucial role in the body’s antioxidant defense system (35).

Molybdenum is one of the lesser-known minerals.

However, it is also essential, and it plays a vital role in human health.

For instance, molybdenum is part of numerous vital enzymes, such as sulfite oxidase and nitrogenase (39).

Phosphorus is one of the major minerals, and it is an important component of bone (42).

This essential mineral is also vital for storing and transferring energy, and for the overall growth, development, and repair of the body’s tissues (43).

Potassium is one of the major essential minerals, and it is also an important electrolyte.

In this regard, potassium plays a critical role alongside sodium (and chloride) in determining fluid balance inside and outside of cells (46).

Due to this, potassium also has a primary role in regulating blood pressure (47).

On this note, higher intakes of potassium to sodium generally result in lower blood pressure. A recent systematic review and meta-analysis supports these benefits of increased potassium intake (48).

The human body needs potassium in relatively high amounts, and the mineral has many important functions.

There is currently no RDA for potassium, but an adequate intake (AI) level has been set by the National Academies of Sciences, Engineering, and Medicine (49).

For more options, here are twenty of the most potassium-rich foods.

Selenium is an essential trace mineral that forms an integral part of several antioxidant enzymes and proteins (51).

As demonstrated in a recent randomized controlled trial, maintaining adequate selenium levels may help to reduce oxidative stress within the body (52).

In addition to the mineral’s role in the human antioxidant system, selenium is also essential for thyroid hormone metabolism (53).

See this guide to selenium for more information on its functions and benefits.

A full list of selenium-containing foods is available here.

Alongside potassium, sodium is a major electrolyte mineral that helps to determine fluid balance within the body (46).

Although it is an essential mineral, high sodium intake can lead to hypertension and increased blood pressure in some individuals (56).

Here is a summary of recent research on sodium requirements.

There is no set recommended daily allowance for sodium intake, but the 2015-2020 Dietary Guidelines for Americans recommend an upper intake of 2,300 mg per day (57).

Zinc is an essential trace mineral that plays a vital role in the immune system.

Additionally, the mineral also supports the normal growth and repair of cells and tissues within the body (59).

For a full look at the functions of zinc, see this guide here.

As a trace mineral, the human body only requires minimal daily quantities of zinc.

Additionally, here is a list of the most zinc-rich foods.

There are numerous essential minerals that the human body requires.

Some of these minerals are required in higher amounts, while the body only needs a small intake of others.

As is usually the case, the best approach to consume an adequate amount of these minerals is to emphasize nutritious, whole foods, and limit ultra-processed food.

For more on nutrients, find out about the essential vitamins we need.

Or see these nutrition guides for more on popular nutritional topics.