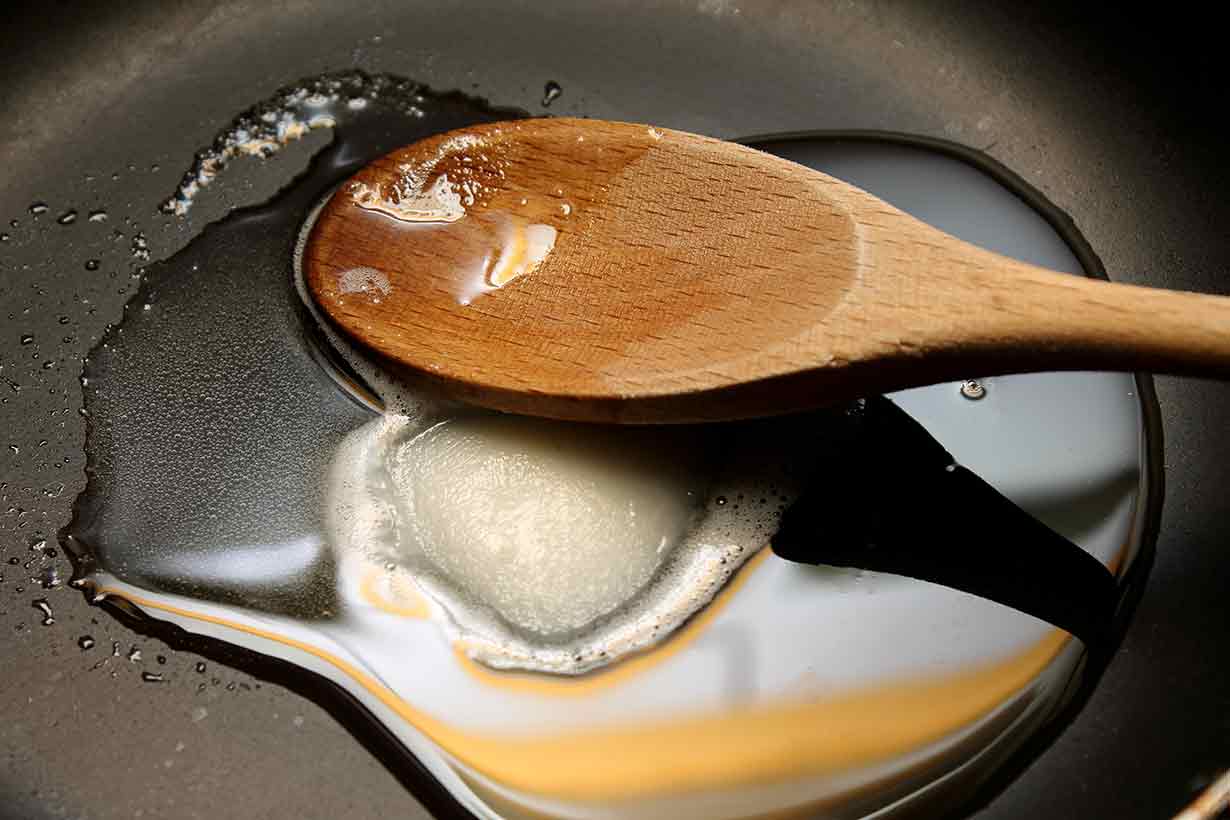 There are so many different types of fat out there.

Unfortunately, many people experience a lot of confusion about dietary fat, mainly due to the mixed messages from the media.

Put simply; consumed sensibly, dietary fat is not a big dietary villain as once thought.

This article will take a look at the various varieties of fat, explain what they are and where to find them.

We will also review the different foods we can find these fats in.

Lastly, we will discuss which cooking oils are the most supportive of good health.

Alongside carbohydrate and protein, fat is one of the three macronutrients in our diet.

However, “fat” is not one single entity, and there are many different types – and subtypes – of fat.

Sometimes people refer to fats as “triglycerides,” which are the primary form of fat in our body and food. Triglycerides are comprised of glycerol and three different fatty acids.

Dietary fats have a wide range of biological functions, which we will discuss later.

Is Fat Essential For Humans?

Fat is essential for our health, but we do not have a biological need for all the different fatty acids.

The only essential fats are omega-3 and omega-6, and the reason for this is because our body cannot make them itself (1).

As a result, we need to consume omega-3 containing foods such as oily fish, and foods with omega-6, which is prevalent in everything from meat to nuts.

Since they are vital for our health, people often refer to omega-3 and omega-6 as essential fatty acids (EFA).

Key Point: Dietary fat is one of the three macronutrients and it plays an important role in our health.

There are four main classifications of fat that we can find in our food;

While you may have heard about “good fats” and “bad fats” before, this is an overly simplified definition.

In truth, there are some important considerations to understand.

Let’s quickly do an overview of each type of fat;

To explain this, we first have to understand that fats are made from carbon (C), hydrogen (H) and oxygen (O).

First of all, saturated fat does not contain any double bonds.

For example, a carbon atom can connect to four different atoms – whether carbon (C) or hydrogen (H).

If a carbon atom connects to the next carbon atom in the chain twice (a double bond), then it will not be able to connect to all the hydrogen atoms it can.

Therefore, it will not be fully saturated.

As you can see in the image above, the carbon atoms only have a single bond to each other, and connect to hydrogen atoms. This is an example of saturated fat.

The molecules in saturated fats are packed close together, and the fat is solid at room temperature and very heat stable.

Just as “fat” is not only one thing, neither is saturated fat.

Saturated fat comprises of a wide range of saturated fatty acids, which all have a different number of carbon atoms in their chain.

For this reason, some are known as ‘long-chain’ saturated fats and others are called ‘short-chain’.

Here are the saturated fatty acids alongside the number of carbon atoms they contain (in the lipid name column).

The ‘C’ refers to the number of carbon atoms, and the ‘0’ means there are no double bonds.

Furthermore, all saturated fatty acids have differing effects on our health.

Profiling each one is beyond the scope of this article, but it shows us why “good fats” and “bad fats” is far too simple.

While many different foods contain saturated fat, it occurs in exceptionally high concentrations in dairy and tropical fats such as coconut oil.

Some further examples of saturated fat include the following foods;

In contrast to saturated fat, monounsaturated fat contains a single double bond between two carbon atoms, as shown in the above image with two lines connecting the ‘C’ atoms.

The presence of this double bond means that monounsaturated fat is not fully saturated with hydrogen atoms, and it is slightly less heat stable than saturated fat.

However, saturation is not the only consideration that determines the oxidative stability of cooking fat.

For instance, phytonutrients/polyphenols in fat can help to prevent oxidative damage and the oil from breaking down (2, 3).

This fact is one reason why extra virgin olive oil, complete with all its polyphenols, is much more heat stable than heavily refined olive oils, which are lower in these compounds.

The most prevalent of these is called oleic acid, which is actually the most commonly occurring fatty acid in nature.

Oleic acid is also the predominant fatty acid in avocados and olive oil, as well as most kinds of meat.

The table below shows the full range of monounsaturated fatty acids.

The ‘n-‘ number denotes the location of the double bond.

It is interesting that most people think of meat as saturated fat.

For one thing, monounsaturated fat is the predominant fat in many types of meat and animal fats in general.

This fact is quite interesting because there is a common myth that only saturated fats are heat stable, which is something that many animal fat proponents promote.

Monounsaturated fats are not quite as heat stable as saturated fat, but they are a lot more stable than polyunsaturated fatty acids, which is the next type of fat we will discuss.

The primary dietary sources of monounsaturated fat include the following foods;

Key Point: Monounsaturated fatty acids contain one double bond, they are liquid at room temperature, and they are reasonably heat stable. This is particularly the case for fats that contain polyphenolic compounds such as extra virgin olive oil.

As you can see in the image, there are numerous double bonds between the carbon atoms.

For this reason, polyunsaturated fat is the least stable, and it can readily oxidize at high heat.

There are three different types of polyunsaturated fat, and these include omega-3 and omega-6 fatty acids, and one omega-9 fat.

You may see the full range of polyunsaturated fats in the table below;

Omega-3 fats play a vital role in our overall health.

Additionally, another omega-3 fatty acid – alpha-linolenic acid (ALA) can be found in various plant foods.

Importantly, omega-3’s are anti-inflammatory and systematic reviews and randomized controlled trials show that they help to (6, 7, 8);

Fish and seafood are the best sources of omega-3.

The list below shows common sources of these fatty acids;

* Note that animal foods are the best source of omega-3 since they provide preformed EPA and DHA.

While plant foods also contain omega-3 fatty acids, they are in the form of ALA, which is not bioavailable and requires conversion to EPA and DHA inside the body.

Unfortunately, conversion rates are unreliable and can be as low as 0-4% (9).

Generally, we aren’t getting enough omega-3, and we should look to increase our consumption of omega-3 fatty acids.

See this full guide to omega-3 fats for more information.

Key Point: Omega-3 fatty acids are anti-inflammatory in nature, and they are a type of polyunsaturated fat. Ensuring sufficient intake of these fatty acids may provide some important benefits.

Omega-6 is also an essential fat, meaning that we need to acquire sufficient amounts of this fatty acid from food.

Omega-6 fatty acids play an important role in normal growth and development, and they are vital for brain function (10).

When discussing omega-3 and omega-6, a common topic that arises is how the ratio of these two fatty acids may affect health.

For instance, some researchers claim that traditional human diets had an omega-6 to 3 ratio close to 1:1. Conversely, the modern American diet can be as high as 20:1, which some people claim may lead to an increased risk of damage from inflammatory processes (11, 12, 13).

But is this something we should actually worry about?

See this guide on the omega-6 to 3 ratio and whether it matters for more information.

However, most people are consuming large amounts of omega-6 now, and the fat is present in almost all foods.

Due to this, there is no real reason to seek out foods high in the fat specifically as most people already get enough.

Key Point: Omega-6 is an essential fat, but most people are consuming too much of it these days.

Trans fats can be either natural or man-made in origin.

A type of trans-fatty acid occurs naturally in animal foods called conjugated linoleic acid, and this fatty acid may have some positive health benefits (14).

However, artificial man-made trans fats are a different matter. Trans fats are unsaturated fatty acids (often cottonseed or soybean oil) that undergo a hydrogenation process to make them appear like saturated fat.

Some examples of trans fats include vegetable shortening and margarine, which are both solid in texture.

Initially, researchers saw potential benefits from this hydrogenation process such as better shelf-life and more stability at high heat. However, the problem is that these artificial fats were so different from anything in nature that our body did not know what to do with them.

In short; the molecular structures are arranged differently and they appear foreign to our body. As a result, they are unstable, they can readily oxidize, and they can potentially lead to a number of health problems (15, 16, 17).

Fortunately, if we focus on fresh and healthy whole foods we can avoid trans fats without having to think about it.

If you buy packaged foods, give the label a quick scan for any mentions of ‘partially hydrogenated’.

Key Point: Trans fats are an industrial product and one of the worst things we can possibly eat. Avoid this type of fat.

Dietary fat can affect our health in many ways, and it can either be beneficial or detrimental depending on the type (and quantity) of fat.

Fat also helps our body to absorb fat-soluble vitamins and it makes our food taste delicious too.

All in all, fat isn’t “bad” for us as many have been led to believe over recent decades.

But that doesn’t mean that it can’t be bad; as with anything, the dose makes the poison.

To learn more about different nutrients, see this list of nutritional topics.

Thanks Wendy, glad you found it useful.