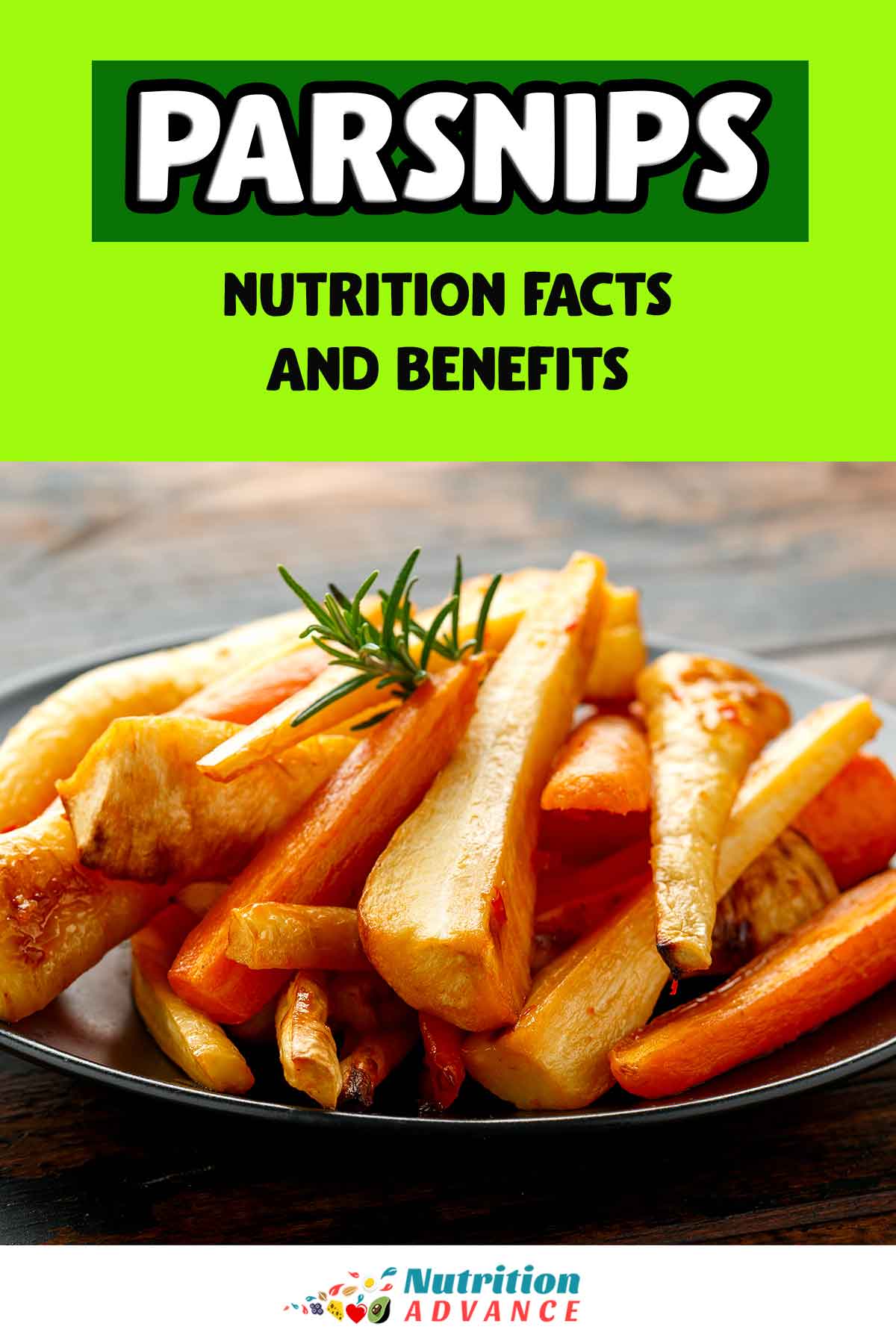 Parsnips are creamy colored root vegetables that have a similar shape to carrots.

However, aside from their shape, these two vegetables are very different. Parsnips have a unique and slightly sweet taste with a mildly nutty flavor.

Aside from their pleasant taste, parsnips provide good nutritional value too. This article explores their nutrition profile and potential health benefits. 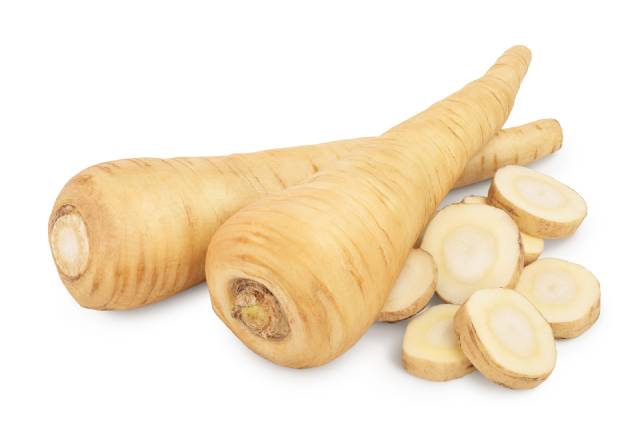 However, parsnips are a good source of nutrients, and they offer some level of almost every vitamin and mineral.

Based on data from the USDA FoodData Central database, here are the nutritional values per large cooked parsnip (160 grams) (1).

As shown in the table, parsnips are primarily a source of carbohydrate. Research suggests that their glycemic index is 52 (2).

Parsnips offer a decent level of vitamins. The list below shows the daily value (% DV) for each vitamin that one large parsnip provides (1):

As shown in the above list, parsnips are particularly high in vitamin C, folate, and pantothenic acid.

Vitamin C is an antioxidant vitamin that plays a crucial role in strengthening immune defense (3, 4).

Folate is one of the B vitamins, and it has a vital role in energy production and growth. It is also one of the most important nutrients during pregnancy, as it can help to prevent neural tube defects (5, 6).

Pantothenic acid is another B vitamin (B5). This nutrient is important for energy production and metabolizing dietary fats (7).

The mineral content of parsnips is reasonably good too, and a large parsnip offers (1):

The three minerals present in the most significant amounts in parsnips are copper, manganese, and potassium.

Copper plays a role in energy production, the formation of connective tissue, and it is also important for iron metabolism (8).

Finally, potassium is an electrolyte mineral that plays a crucial role in blood pressure regulation (10).

Parsnips are a good source of fiber

Parsnips are among the most fiber-rich vegetables, and they provide 3.6 grams of fiber per 3.5 oz (100 grams).

Fiber can potentially have a range of benefits, including:

Phytochemicals are the chemical compounds found in plant foods such as carotenoids and polyphenols that may have potential health benefits.

The phytonutrients present in parsnips include (14):

Among these phytonutrients, parsnips contain particularly high amounts of falcarinol and falcarindiol.

These two phytochemicals belong to a class of compounds called polyacetylenes. Rodent studies suggest that falcarinol and falcarindiol may have anti-inflammatory properties (15, 16).

However, the research on phytochemicals in food and their effect on human health is at an early stage. Further, there are no human trials involving either falcarinol or falcarindiol.

In other words, we cannot assume that the effects of eating phytochemical-containing foods would be the same as seen from testing the isolated compounds in animal studies.

More research is necessary before making strong claims on this topic.

Key Point: Parsnips contain a range of different phytochemicals, but more research is needed on their potential health effects.

Parsnips are tasty, and there are many ways to use them 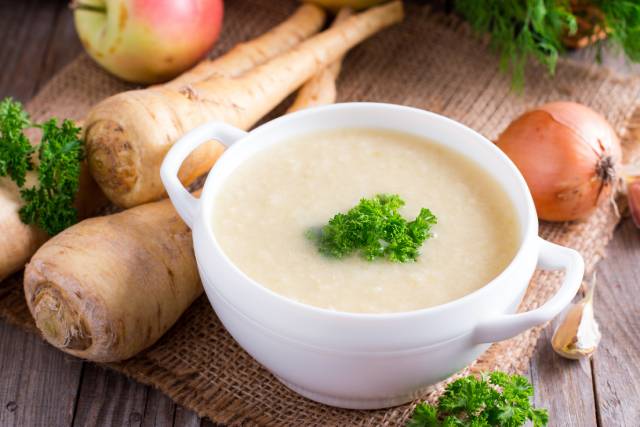 As mentioned earlier, parsnips have a sweet and nutty flavor, and they are one of the best-tasting vegetables.

Furthermore, parsnips are also very versatile, and we can use them in a wide variety of different ways. As a comparison, parsnips are somewhat similar to potatoes in what we can do with them.

For example, we can enjoy parsnips in any of these ways:

For a particularly tasty way of cooking parsnips, try the following recipe:

Step 2: Parboil the parsnips for 10 minutes.

Step 3: Rinse the water away and add the parsnips to a bowl.

Step 4: Toss the parsnips in the bowl with melted butter (or oil), salt, pepper, rosemary, and garlic powder.

Step 5: Transfer the parsnips to a baking tray and roast them in the oven at 210°C (410°F) until golden brown – approximately 35 minutes.

Key Point: Parsnips taste delicious, and they are very versatile too.

Are there any concerns about parsnips?

While parsnips are nutritious and generally healthy, all foods can have their negative points.

With parsnips, there are no significant drawbacks, but there are some things to know.

Phytophotodermatitis is a condition caused by the skin coming into contact with plant chemicals called furocoumarins. Although this condition is usually associated with wild parsnips, regular garden parsnips are capable of causing it too (17, 18).

The condition is caused by skin contact with the sap or potentially even the surface of the parsnip plant. When UV light activates the furocoumarins contained within, they can cause a painful reaction when they come into contact with human skin, which can lead to short-term blistering (19).

However, phytophotodermatitis is very rare, and merely handling or eating store-bought parsnips is of no concern.

Water hemlock grows in the wild, and it has a long underground root that shares the same appearance—color and shape—with parsnips.

According to the USDA, water hemlock is “the most violently toxic plant that grows in North America” (20).

Water hemlock poisoning can cause severe reactions and often leads to death (21, 22).

With this in mind, it is important to be sure of correct identification when picking any wild root (or any wild plant at all).

There is an apt saying in the foraging world: “if in doubt, leave it out.”

All in all, parsnips are reasonably nutritious root vegetables that offer a good range of nutrients.

Parsnips are delicious too, which makes their versatility an added benefit since we can use them in so many ways.

For more on vegetables, see this list of popular vegetables and their nutritional profiles.