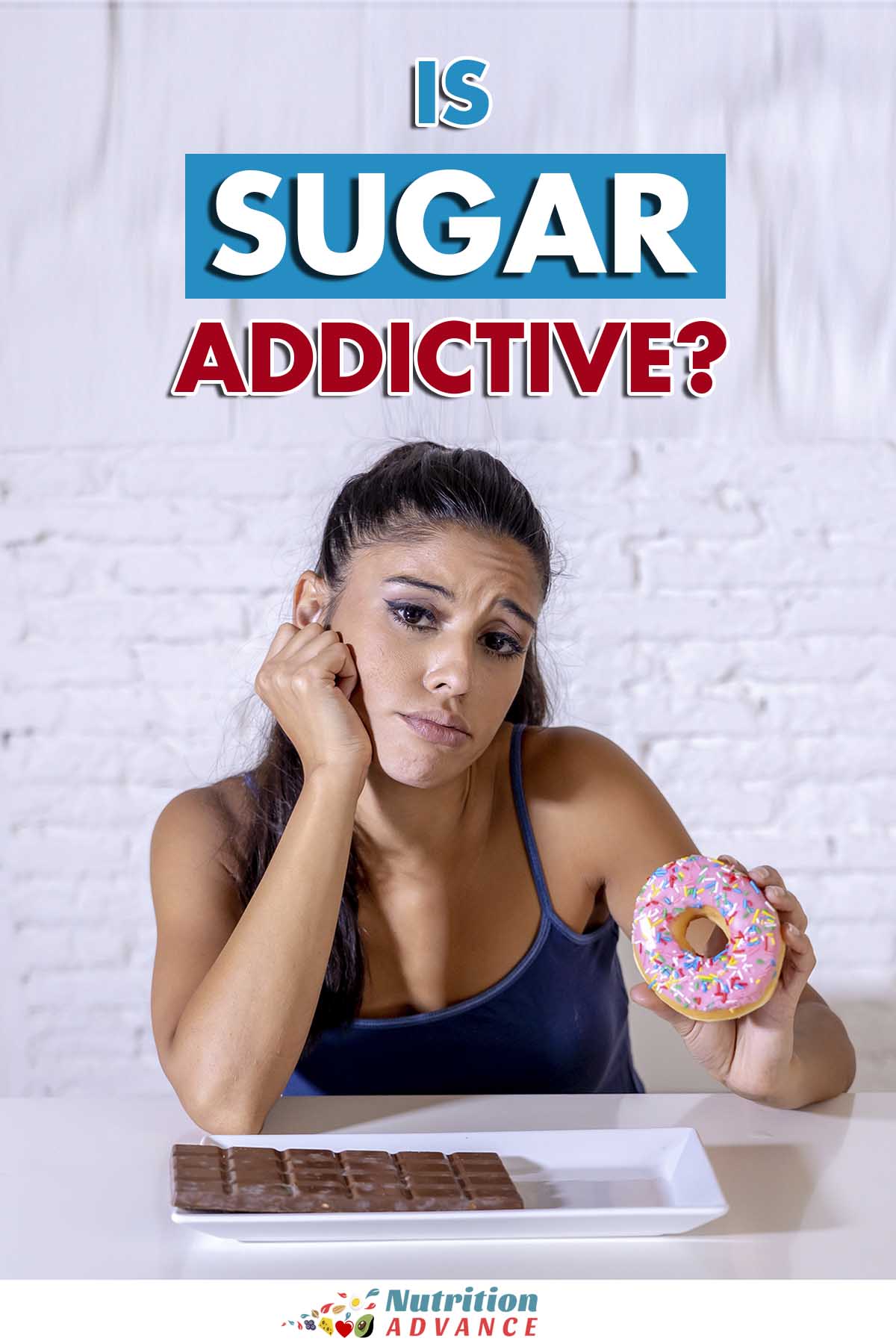 Sugar is one of the most common ingredients in our food supply, and it contributes to the flavor and consistency of food.

On the negative side, the excessive consumption of sugar in the modern diet is thought to be one of the contributive factors to obesity in the Western world.

But what drives this high consumption level?

Some researchers claim that sugar is addictive and that drug-like “sugar addiction” is a real issue (1, 2).

However, most scientists warn that there is a lack of evidence for this belief.

Further, they note that we shouldn’t proceed with “premature incorporation of sugar addiction into the scientific literature” (3).

This article takes a look into the ideas people have around sugar addiction and how well-supported (or not) it is. 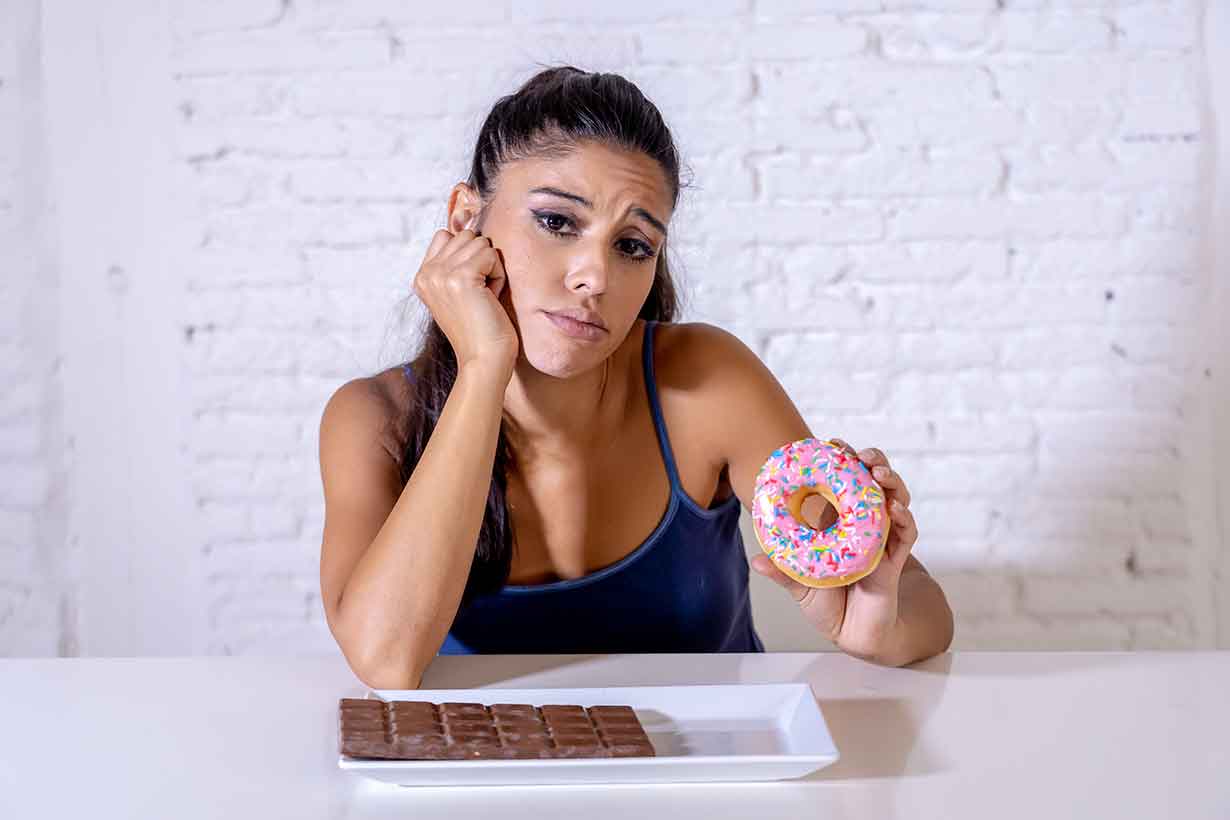 First of all, there is no argument that sugar is rewarding. There is sufficient evidence to support this too.

For example, glucose-sensing neurons in the hypothalamus region of the brain play a role in food reward systems (4).

Furthermore, receptors known as ‘chemosensors’ in the small intestine and the mouth can detect sugar intake.

Researchers have noted that these sensors send positive feedback signals to the brain, which leads to increased dopamine release (5).

Dopamine is a hormone and neurotransmitter which helps to regulate feeding, and dopamine release positively “reinforces” the value of a food.

In other words, this mechanism helps us to recognize the benefits of a specific food subconsciously, and for lack of better words, it makes us more likely to “crave” the food in question (6).

However, it is worth noting that not only sugar causes dopamine release.

Other foods also activate this food reward system, and energy-dense foods that are high in sugar, fat, and calories are all highly valued (7).

From an evolutionary perspective, this system was beneficial when food was scarce, and it helped us to seek out energy-rich food.

However, in the modern, privileged world, it can be a liability since we have almost unlimited access to food.

Key Point: Sugar is rewarding and may cause us to seek out foods containing it. However, other energy-dense foods are equally rewarding.

But people tend to crave high-fat, high-carbohydrate foods rather than sugar itself

Interestingly, the foods that most people crave (or claim to be addictive) often feature a combination of refined carbohydrate/sugar and fat rather than sugar alone.

In this regard, the University of Michigan recently published a study entitled ‘Which foods may be addictive?’

The study examined the role of processing, fat content, and glycemic load. Further, the researchers sought opinions from 120 participants on which specific foods had the most potential for encouraging addictive-like eating behaviors.

Researchers looked at these choices and identified that most addictive-like foods were high in fat and had a high-glycemic load.

In other words, these foods contained large amounts of both carbohydrates and fat. The table below shows the ten foods selected as being “most problematic” (8):

As you can see in the table, the majority of these foods are, primarily, sources of refined carbohydrate and fat.

Or do isolated sources of sugar, such as hard candy, cotton candy (candyfloss), and sugar itself appeal more?

Key Point: Most foods that people identify as being ‘addictive-like’ feature a combination of refined carbohydrate and fat.

There are some big claims about sugar’s addictive properties

There are some significant claims about the proposed addictive nature of sugar.

For instance, Healthline, an influential media giant in the Health space, recently ran a piece entitled ‘Sugar Might Be as Addictive as Cocaine.’

Is there any evidence for sugar being “as addictive as cocaine“?

With a big claim like this, we need to examine whether it is well-supported by the existing research base.

An often-cited paper is a 2017 narrative review entitled ‘Sugar addiction: is it real?’ published by the British Journal of Sports Medicine.

This review claimed that “animal studies have confirmed that the reward for sugar can surpass that of cocaine” and that “in animal studies, sugar produces more symptoms than is required to be considered an addictive substance” (9).

The argument the researchers are making here is that because rodents chose sugar-water over cocaine, sugar must have strongly addictive-like properties. For anyone who wishes to read the primary literature on sugar/sweet-taste addiction in rats from which the above-referenced remarks were drawn, see here.

On the other hand, there are clear counterpoints that suggest sugar isn’t uniquely addictive in rodents. For instance, a very similar study found that rats also expressed a preference for water sweetened using the artificial sweetener saccharine over cocaine (10).

In this particular study, rats chose saccharine-sweetened water over cocaine water when offered the choice. This preference persisted no matter how long the rats had been consuming the cocaine mix.

A research paper entitled ‘Sugar addiction: the state of the science’ further noted that such animal behaviors occur due to the tendency to seek out highly palatable foods rather than any unique property of sugar (11).

Some people feel that sugar-sweetened beverages are addictive, but is sugar the culprit?

Thus far, we have noted that the combination of carbohydrate and fat appears to have more ‘addictive-like’ properties than sugar alone.

In this case, what about liquid forms of sugar, such as soda and sugar-sweetened beverages?

Do these drinks have the potential to be addictive?

First of all, it is worth remembering that many forms of soda also contain caffeine, which is a recognized drug with the potential to be addictive (12, 13).

Interestingly, there is also data that demonstrate liquid calories may, to some extent, override the normal satiety response to food intake. In other words, such drinks may not be as satiating compared to an equivalent energy intake from food.

Blood tests conducted by the researchers revealed that regular cola increased ghrelin levels more than any of the other drinks. Ghrelin is a hormone often referred to as “the hunger hormone” for its role in stimulating appetite (15).

Milk also raised ghrelin levels compared to diet cola and water. However, milk led to greatly increased feelings of fullness and satiety among the participants, while regular cola did not.

Other studies in this area have also shown that ‘thin’ beverages have a poor effect on satiety compared to thicker and more viscous food-like drinks (16).

Key Point: The sugar content of sweetened beverages may play a role in cravings. However, there is also evidence that caffeine and the weak effect of liquid calories on satiety are involved.

Although sugar is not recognized as being clinically addictive, the idea of ‘food addiction’ has received some acceptance.

For instance, the Diagnostic and Statistical Manual of Mental Disorders (DSM-5) officially recognized binge eating as being a mental disorder in 2013 (17).

The DSM-5 is an influential handbook used by health professionals to diagnose mental disorders (18).

While there is a range of criteria used to diagnose whether someone suffers from binge eating disorder, some of these include (19):

Key Point: Sugar addiction is not clinically recognized. However, binge eating is a recognized mental disorder.

But do some people feel addicted to sugar?

While ‘sugar addiction’ may not be recognized in the same way that binge eating disorder is, there are many anecdotes from people who claim to suffer from strong sugar cravings.

According to researchers, the sudden withdrawal of sucrose from the diets of these animals results in “depression and anxiety-like symptoms,” which reverse when sugar is re-introduced into the diet (20, 21).

An alternate consideration is that, in human studies, restrictive eating is more likely to trigger binge-eating behavior toward restricted foods (22, 23, 24).

For this reason, restrictive dietary patterns may also reinforce the view that sugar is addictive in some people.

Key Point: Although sugar addiction is not recognized as a mental disorder, many people find it difficult to lower their sugar intake.

What can people do about food cravings?

It can be challenging to deal with cravings for food.

For anyone in this position, a sub-optimal diet that doesn’t encourage feelings of satiety can sometimes be an issue.

In this regard, a nutritionally adequate diet that contains higher levels of protein and fiber tends to be the most satiating, and regular eating habits (meal timing) can help encourage consistency (25, 26, 27).

On the other hand, nutritionally inadequate diets are likely to exacerbate potential food cravings.

What can people do if they have a serious problem with food?

Anyone who feels they have a severe problem with food should seek personalized advice from a professional.

In the case of binge eating disorder, this is a serious condition that can have significant detrimental impacts on health, and it requires expert guidance.

Seeking advice from a doctor/physician would be the best way forward for individuals in this situation.

Additionally, here are some resources from non-profit organizations that provide support and guidance to those with suspected eating disorders:

Overall, the existing evidence suggests that hyper-palatable food—particularly food that is high in calories, fat, and carbohydrate—can have addictive-like properties.

However, at present, there is a lack of evidence from human trials to conclude that sugar alone is particularly addictive.

That said, many people do feel they have problems with sugar, and research is still ongoing in this area.

For more on the different types of sugars and artificial sweeteners used in food, see this complete guide to sweeteners.