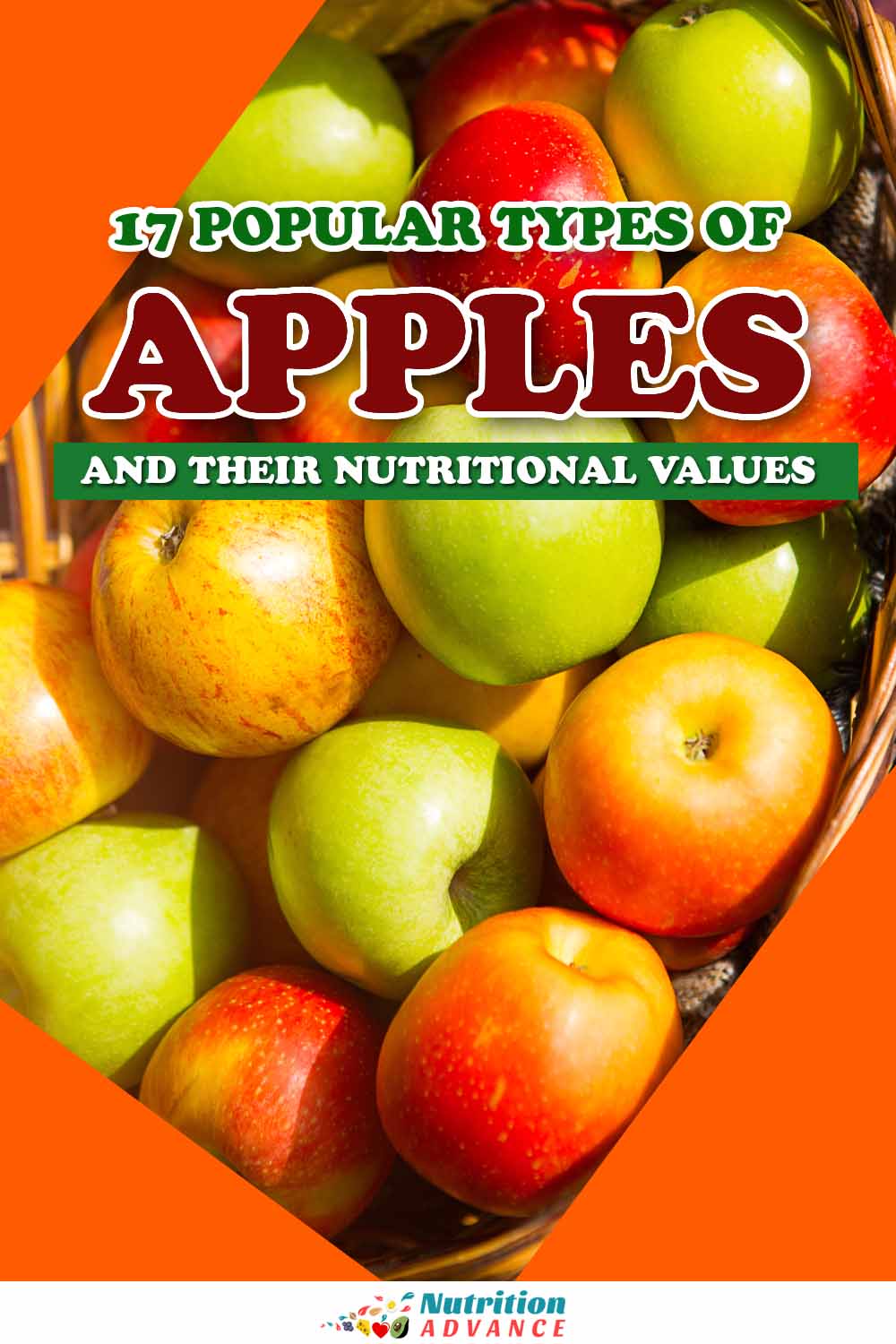 Apples are one of the most popular fruits in the world.

However, there is more to apples than just ‘red’ and ‘green.’

In fact, there are hundreds of different apple cultivars, and all of them are slightly different.

This article looks at 17 popular types of apples, their characteristics, and their nutritional values.

How do they all compare?

The source of nutritional values is the USDA FoodData Central Database where available, and other sources include Nutritionix, My Food Diary, and Cronometer.

As shown, Ambrosia apples look partly red and partly green, with some areas containing a mix of the two colors.

These apples are one of the sweetest types of apples, and they have a crisp and crunchy texture with juicy flesh. In addition, Ambrosia apples have low acidity, so they don’t taste at all tart.

Also, Ambrosia apples tend to be quite large, and they weigh more than most other apples.

Here is the nutritional data for a medium (182g) ambrosia apple (1).

Here is an image showing the typical look of a Braeburn apple:

As shown in the picture, Braeburn apples are mainly red, with little bits of green coming through from the base in some areas.

Braeburn apples have a crisp, crunchy, and juicy texture, with a sweet and slightly tart taste.

The discovery of the Braeburn took place in 1952, and it is closely related to Granny Smith and Lady Hamilton apples (2).

Here are the nutritional values for a medium (133-gram) Braeburn apple (3).

The image below shows the appearance of a typical Bramley apple:

Unlike most other apples, Bramley apples do not have a smooth and uniform shape. Instead, they have an uneven shape, and one side is often larger (or raised) than the other.

Bramley apples are also known as ‘cooking apples’ due to widespread culinary use. One reason why they are a popular cooking apple is their taste characteristics.

These apples are much tarter than other apples and very sour. Due to this, using them in cooking (which typically makes apples taste sweeter) helps retain the tart and tangy notes.

Generally speaking, Bramley apples are always used in cooking as they are too sour to eat raw.

Here are the nutritional values for a regular-sized Bramley apple (200g) (4).

Below we can see what a regular Cortland apple looks like:

The apple has predominantly red skin, with slight shades of green in some areas.

Cortland apples come in all kinds of sizes, and they are one of the commonly found apples within the United States.

These apples have a crisp and crunchy texture, and they are partly sweet and partly tart in terms of taste.

A typical Cortland apple has the following nutritional properties (6):

Here is a picture of several Empire apples:

As we can see, the Empire apple is a smooth and shiny apple that is primarily red with tinges of green.

Empire apples are yet another developed hybrid of two apple cultivars; McIntosh and Red Delicious (7).

Although they mainly grow in North America, they are exported worldwide.

A regular Empire apple will have nutritional values as below (8):

The picture below shows a single Fuji apple:

These apples have soft shades of red mixed with smaller yellow-green tones and a white-green inner flesh.

The Fuji apple originated in Aomori, Japan, in the late 1930s. Notably, it was Japan’s first cultivated apple (9).

These apples offer a crisp bite and firm, crunchy flesh. They taste very sweet, and they have only slight acidity.

Despite originating in Japan, growers now produce Fuji apples around the world.

A medium-sized (192-gram) Fuji apple has the following nutritional values (10):

In the below image, we can see a whole and a half Gala apple:

The outer skin has varying shades of green and red, and the inner flesh has a cream to light yellow tone.

Gala apples originated in Wairarapa, a region of New Zealand, in the 1930s, and they are one of the most popular apples globally (11).

These apples are also one of the most produced apples in the United States. After surpassing Red Delicious, Gala held the number 1 position for production based on 2019 and 2020 data (12).

Gala is one of the sweetest apple varieties, and they are also crunchy and very juicy.

The following image shows three Golden Delicious apples next to each other:

As shown in the photo, the apples have an attractive gold-like yellow and green color.

Golden Delicious is a North American apple, having first originated in West Virginia, United States, in the early 20th century (14).

The apples have a sweet taste with little acidity, and the flesh is crunchy and full of juice.

Golden Delicious is one of the most popular apples around the world.

Below we can see a single Granny Smith apple:

Granny Smith apples have a uniform green color, and it is a darker shade of green than most apples. The skin also has little white specks visible when looking at close range.

These apples are slightly tart and tangy, which may or may not be a good thing, depending on personal preference.

However, they also have a sweetness to them and a refreshing, juicy, and crisp texture.

The Granny Smith originated in New South Wales, Australia, in 1868, named after the lady who discovered it; Maria Ann Smith (16).

At present, Granny Smith apples are among the most produced types of apples globally. They have the fifth-highest production levels out of all apples in the United States (17).

Here are the typical nutritional values for a medium-sized (167-gram) Granny Smith apple (18):

Two whole Honeycrisp apples and a half are shown in the image below:

These apples have a red to pink shade covering a light-green base color, which shows in different proportions depending on the apple.

As their name suggests, Honeycrisp apples have a crisp texture and a sweet taste. The apples are very juicy too.

Interestingly, Honeycrisp apples originated through a cross-breeding program in 1960 but didn’t reach the market until 1991 (19).

In this short space of time, Honeycrisp apples became one of the most popular apples in the United States. In 2021, they had the third-highest production figures, only exceeded by Gala and Red Delicious (16).

Here we can see a single red Jazz apple:

As the picture shows, Jazz apples have a bright red color with green-yellow base shades.

Jazz apples originated in New Zealand, and they are a cross between two highly popular apple cultivars; Braeburn and Gala (21).

Jazz apples are slightly tart but mainly sweet and juicy, with a crisp texture like their Braeburn and Gala ancestors.

Based on data from the Cronometer Community Database (CRDB), here are the nutritional values for a medium (154-gram) Jazz apple (22)

The image below shows three Jonagold apples on a wooden board:

As the picture shows, Jazz apples have a greeny-yellow base color with shades of light red covering them.

Jonagold apples originated in New York in the 1950s, and it was a cross between the Golden Delicious and Jonathan apple (23).

Like the two apples that came before it, Jonagold apples have a mild, sweet, and juicy taste.

Here are the typical nutritional values for a medium (154-gram) Jonagold apple (24):

We can see a single McIntosh apple in the image below:

These apples have been around for a long time, and their first discovery came back in 1811 in Ontario, Canada (25).

Perhaps more commonly known is that Apple Macintosh computers took their name from this McIntosh apple (26).

These apples are crunchy, juicy, and taste equal parts sweet and tart.

Using data from the CRDB nutrition database, here are the typical values for a medium (150-gram) McIntosh apple (22):

In the image below are two whole Pink Lady apples and half a pink lady, showing the inner flesh:

Pink Lady apples have an attractive pink-red color on top of a yellow-green base, with a cream to light yellow flesh.

The Pink Lady is among the tartest apple varieties, but it has a sweetness equal to its acidity.

The apples originated in 1973 in Australia when they were developed by cross-breeding a Golden Delicious with a Lady Williams cultivar (24).

Despite Pink Lady’s branding, its scientific name of ‘Cripps Pink’ refers to its founder, John Cripps.

The following data from the CRDB nutrition database shows the nutritional values of a regular 133-gram Pink Lady apple (22):

Here is an image of one single Red Delicious apple:

As we can see, the Red Delicious has a striking and bold bright crimson color, which is uniform around the apple.

The Red Delicious is one of the most popular apples, and it is a classic variety that came to fame at an International fruit show in 1893. However, the first discovery of the apple happened in 1872 (25, 26).

Red Delicious apples earned their ‘delicious’ name due to their unique new taste at the time.

The taste of a Red Delicious apple is mildly sweet.

The picture shows that the Russet apple has a unique color and shape and looks quite dissimilar to other apples.

Russet apples have color that features brown, green, and yellow shades. Unlike most apples, the skin is not smooth, and it has a rough and scratchy texture.

The name ‘Russet’ refers to this rough, brownish skin that the apple develops.

There are numerous different varieties of Russet apple. Perhaps the most known of these is the Egremont Russet, which has an interesting nutty taste.

Here are the nutritional values per 150-gram Egremont Russet apple (29):

SweeTango apples are a relatively new apple cultivar, available since the year 2009 (30).

The apple is the result of breeding the Honeycrisp apple cultivar with a cultivar called Zestar.

These apples are said to taste ‘crisp and sweet, with a lively touch of citrus, honey and spice‘ (31).

It is worth noting that ‘SweeTango’ is the brand name of the apple, and the common name for the cultivar is Minneiska.

The SweeTango is also quickly increasing in popularity, with double-digit production growth rates for much of the past decade (32, 33).

Below are the nutritional values for a 182-gram SweeTango apple (34):

Here are some typical questions and answers that people may have about the different types of apples.

Which apple varieties are the sweetest?

Many apples have a sweet taste, but some of the sweetest popular apples include Ambrosia, Fuji, Gala, Honeycrisp, and SweeTango.

Which types of apples have the most tart taste?

Firstly, Bramley apples are very tart, but they are better suited to cooking and less enjoyable to eat alone. Among the most popular apples to eat out of hand, those with a tart taste include Braeburn, Granny Smith, and Pink Lady.

Are apples a healthy choice?

Apples have several good nutritional benefits, such as their provision of fiber. Additionally, apples provide a range of vitamins and minerals, although relatively modest amounts. Apples are also thought to score highly for their impact on satiety levels, and they may help with appetite control.

As shown in this article, there are numerous different apples to discover from around the world.

Each has its own distinct taste and texture characteristics, and all of these apples are enjoyable in their own right.