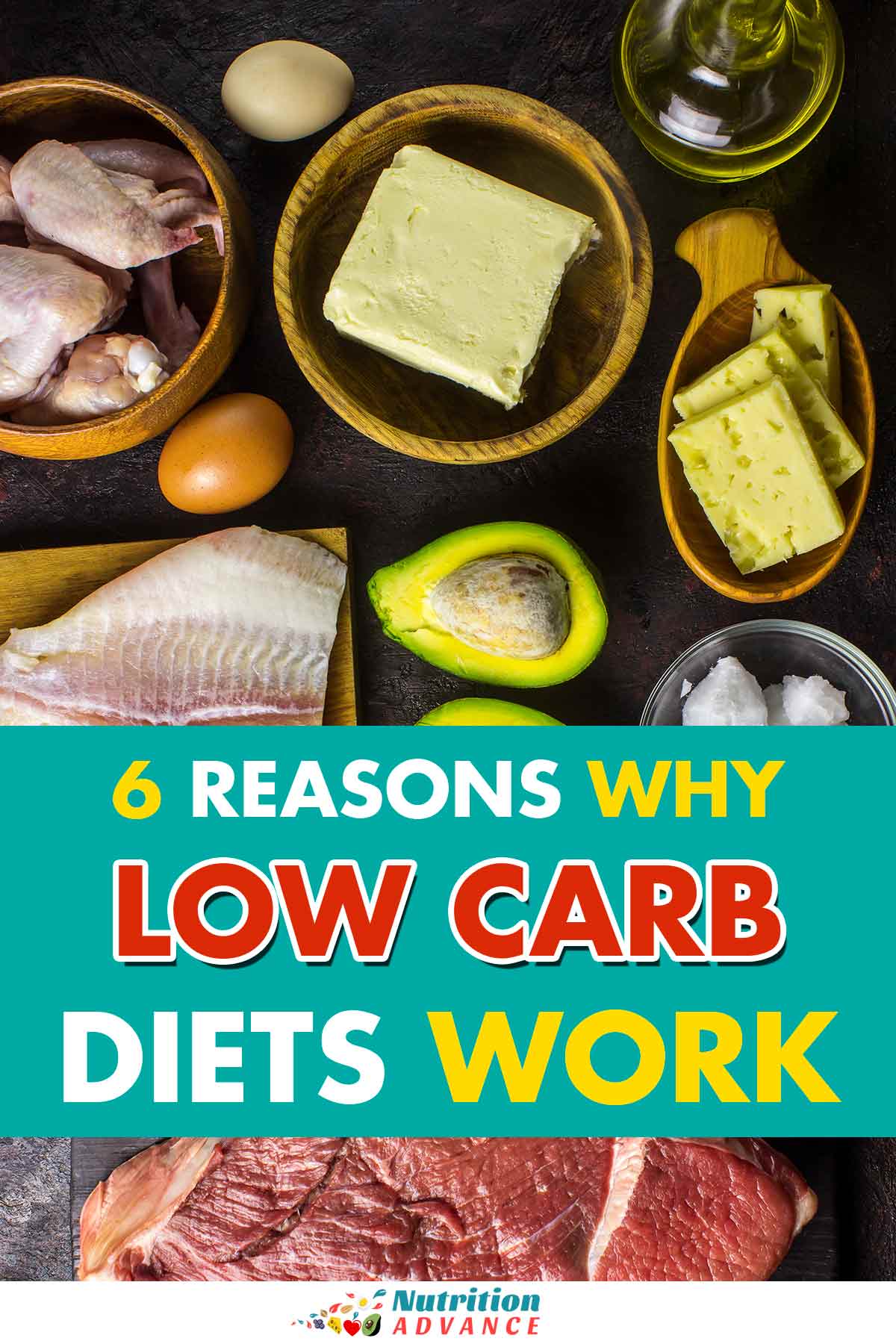 However, “how” and “why” people have success with low carb diets is often a subject of debate.

You can do any diet in the world, but if it doesn’t satiate, it won’t be sustainable.

When most people start a low carb diet, there are a number of changes to the typical meals they consume.

Firstly, most meals start to focus on meat, fish or dairy rather than refined grains.

In other words; people change away from cereal and toast for breakfast, and give up their regular sandwiches for lunch.

The result is that a low carb diet often becomes a ‘higher protein diet’ by default. On this note, researchers widely recognize protein as the most satiating of macronutrients (1).

In further studies, high-protein breakfasts based on eggs lead to better satiation than cereal-based meals, and they lower energy intake from food during the rest of the day (4, 5).

Furthermore, a two-year randomized trial featuring 307 participants compared low-carb to low-fat diets. The study found that participants in the low-carb group were “less bothered by hunger” during the trial (6).

If we consider the most calorie-dense food choices, the vast majority of these contain a combination of refined carbohydrate and fat.

For the most part, these foods are highly processed, they contain a significant number of calories, and they come under the ‘hyperpalatable food’ banner.

‘Hyperpalatable’ refers to the ability of food to have addicting-like properties. While the idea of food addiction is not settled science, there is much debate over whether certain foods can induce addictive behavior and overeating (13).

Whether we believe in food addiction or not, I’m sure that everyone has “overdone it” on these foods from time to time.

Similar to the calorie-dense foods listed above, the same is true for drink options such as beer and cola.

These drinks are extremely high in calories/sugar, and having several of these drinks per day adds a substantial amount of calories to our diet.

3) Diets With “Rules” Can Be Easier Than Counting Calories

Does calories in, calories out (CICO) work for weight loss?

If we burn more calories than we use, then yes, in the majority of cases, weight loss will follow.

However, this does not mean that counting calories itself will lead to weight loss, and basing dietary decisions on the calorie content of food can sometimes be unhelpful.

For one thing, the supposed calorie content of food is not always correct. Research shows that the accuracy of calorie counts on nutrition labeling is weak, and this can lead people to consume more calories than they anticipate (14).

Surprisingly, the FDA allows a 20% margin of error for the listed calories (and nutrients) on a food label (15).

Hypothetically, this could mean that foods equaling 2500 calories on their food labels could really be offering 3000 calories, and this would still comply with the FDA’s labeling regulations.

In reality, the disparities are likely much lower than this, but label inaccuracies are something to keep in mind.

Remembering every single food and drink we consume, calculating the exact quantities, and inputting them all into a calorie calculator can be reasonably accurate.

However, it is a lot of effort, and it is not something that many people find enjoyable.

Some people experience success with diets that eliminate certain food choices as a rule because they are simple to understand and follow.

For example, restricting sugar and grain products (low-carb) or avoiding meat and animal fats (vegan) often leads to weight loss through the absence of eliminated foods.

Using a low-carb diet as an example; a typical fish meal may consist of a fillet of salmon alongside a plate full of fresh vegetables and a bit of butter.

On the other hand, other people may eat the same meal but with an additional half plate of pasta.

The point? Low-carb diets can enhance satiety, and they eliminate high-carb foods, thus, in some cases, regulating calories without the need to count them.

Key Point: One of the ways in which low carb diets work is by eliminating high-carbohydrate “staple” foods, thereby decreasing food intake.

Generally speaking, anyone starting a low-carb diet will see a substantial amount of weight loss over the first week or two.

In reality, this is due to a loss of water weight rather than a decrease in actual fat stores.

How Does It Work?

When we consume carbohydrate, we store it as muscle glycogen, which is known as the “storage form of carbohydrate” (16).

However, we do not store only the glycogen but also water. Our muscles store each gram of glycogen with approximately three grams of water, so one gram of glycogen is about four grams in total weight (17).

When we start a low-carb diet, several things happen;

How Does Water Weight Loss Relate To the Diet Working?

The initial water weight low carb dieters lose has nothing to do with fat stores.

That said, seeing positive changes on the scale can still be very encouraging, and for some people, it can be a big motivational factor to sustain the diet.

Key Point: Low carb dieters can visually see weight loss very quickly. Although this is mainly water weight, it can still be motivational.

If you look at the typical carbohydrate sources on a low carb diet, it is noticeable that they are mainly fibrous carbohydrates.

The most low-carb friendly fruit options such as avocado and berries are all high in fiber but low in sugar.

Similarly, vegetables that contain lower amounts of carbohydrate such as leafy greens, Brussels sprouts and broccoli offer a rich source of fiber.

Studies demonstrate that foods with a low-energy density and a higher amount of water and fiber likely promote satiety and feelings of fullness (19, 20).

See this guide to some of the best high fiber, low-carb foods for more examples.

Key Point: The quality of carbohydrate that low carb diets contain is a key factor in their effectiveness. These diets shun high-energy refined carbohydrates and focus on fibrous carbs.

The average person who makes a new year’s resolution to do a new diet tends to fail before February. The simple reason for this failure is that nutrition and weight loss are both difficult.

While many people who understand nutrition may feel differently, dieting is very complicated for the general public. For instance, some people barely understand which foods are carbohydrates and which are proteins.

Long story short; many diets fail, and this goes for low carb diets too.

For instance, a systematic review of clinical trials shows that adherence to low-carb diets can be a barrier to their effectiveness. Additionally, a 12-month clinical trial found that only 44.8% of 148 participants met the trial’s carbohydrate goal (23, 24).

However, when you combine a low-carb diet with dietary support, the adherence rate climbs dramatically.

For example, a randomized controlled trial of a ketogenic diet intervention program alongside dietary support reported adherence of 92% (25).

Furthermore, a controlled trial on nutritional ketosis as a treatment for 349 participants with type 2 diabetes also reported high adherence rates. This study also featured personalized support from health professionals, and 83% of patients remained enrolled at the 1-year mark (26).

Support Is Important – Whether From Health Professionals or Communities

Professional and community support can both contribute to the success of a low carb diet.

Firstly, working with a knowledgable nutritionist or dietitian can be extremely helpful.

Secondly, social and community support groups (whether online or offline) can also be instrumental. There are many great resources available and like-minded people who can provide support and encouragement.

On this note, intervention trials are clear that both social and community support can enhance adherence rates to lifestyle interventions (27, 28).

There are many reasons why well-formulated low-carb diets work, and these include their emphasis on satiating foods and the simplicity of the diet.

However, perhaps the most important factor for successful adherence to any diet is whether the individual enjoys the way of eating.

Since low carb diets feature delicious foods like steak, salmon, cheese and dark chocolate, they may do well in this regard too.