Butter is a delicious dairy product that provides an almost pure source of fat.

Used in both recipes and as a cooking fat, butter enjoys popularity in cuisines around the world.

However, butter is a controversial ingredient in the nutrition world.

While some people say it is a healthy fat, others believe it can be harmful to heart health due to its saturated fat content.

This article examines the nutrition benefits—and potential concerns—of butter. What does the science say? 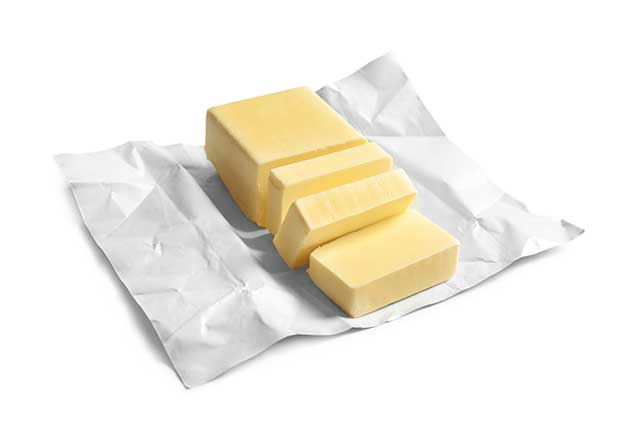 Butter is a dairy product made by isolating butterfat from cream. However, it still contains small amounts of dairy sugars (lactose) and proteins (such as casein).

Interestingly, the first butter likely came from sheep and goats milk, and historical references to this dairy fat go back thousands of years.

As a result, butter has been a long-valued ingredient in the human food chain.

However, in the last century or so, butter consumption fell due to competitors—such as margarine, shortening, and vegetable oils—being pushed as healthier choices.

In the present time, diverse opinions exist on the respective health merits of butter.

How Is Butter Used?

Almost every culture on earth uses butter, and different regions use it in diverse ways.

In the Western world, people commonly use butter in the following ways;

In India, ghee, which is pure butterfat, is an essential cooking ingredient, and it plays a crucial role in various national curry dishes.

Traditional British desserts also commonly feature butter, and some of the most famous options include ‘buttermilk pie’ and ‘bread and butter pudding’.

For something completely different, ‘butter tea,’ locally known as ‘po cha’ is extremely popular in Tibet.

Key Point: Butter has a long history as a culinary ingredient, and it adds a delicious taste to sweet and savory dishes alike. For this reason, it enjoys great popularity around the world.

How Is Butter Made?

However, that was the traditional method of making butter, and commercial production can be quite complex, and it involves numerous steps.

Key Point: The production process of butter is complex and involves numerous stages, and it is very different to traditional methods.

The following nutritional values show the full nutrition profile of butter based on a one-tablespoon (14-gram) serving (4).

As shown, butter is primarily a source of fat—mainly saturated fat—and it contains minimal carbohydrate and protein.

Aside from containing vitamin A in its most bioavailable form (retinol), butter is not particularly rich in nutrients.

In addition to the nutrients shown in the table, butter also contains (lower) trace amounts of numerous other vitamins and minerals.

Key Point: Butter is primarily an isolated source of fat, but it also offers a good amount of high-quality vitamin A.

Now that we know the nutrition profile of butter, we can look at some potential benefits that using this dairy fat may have.

1) Butter Is Relatively Heat-Stable and Does Not Easily Oxidize

When we heat any fat, there is the potential for the fatty acids to breakdown and oxidize.

While research into oxidized fats is ongoing, studies suggest that consuming oxidized fats can have various detrimental health effects.

According to animal studies in this area, consuming oxidized fats can lead to;

However, there is little research in this area in humans. For ethical reasons, it is challenging to study the effects of something proposed to be harmful.

The good news is that some fats are more resistant to oxidation than others. Since butter is predominantly saturated fat—the most stable type of fat—it does not oxidize easily (7, 8, 9).

For this reason, butter is a reasonably good choice for pan-frying. However, ghee is better suited to cooking at high heat temperatures.

We will discuss why later.

Key Point: Butterfat is heat-stable and quite resistant to oxidation.

2) A Good Source of Vitamin A

Butter is a good source of retinol, which is the most bioavailable form of vitamin A (10, 11).

One tablespoon of butter provides 97.1 mcg of retinol activity equivalents, which is equal to 10% of the daily value.

Vitamin A is an essential nutrient that is particularly important for immune health and the visual system. This vitamin also has a crucial role in the maintenance of healthy skin, teeth, and tissues (12, 13).

Key Point: Per tablespoon, butter offers more than 10% of the recommended daily intake for vitamin A.

There are also claims that CLA may be beneficial for losing weight. However, the existing evidence for this is inconsistent.

While some studies suggest potential benefits, others show that CLA does not affect weight or body composition (16, 17).

It is also worth noting that butter from animals raised on pasture contains more CLA than butter from grain-fed animals.

Key Point: Butter is a good source of CLA, which may potentially have health benefits.

4) Butter Is the Richest Dietary Source of Butyrate

Butyrate (butyric acid) is a short-chain fatty acid that we can produce naturally through the microbial fermentation of soluble fiber in the gut (19).

However, certain foods, such as butter, also contain this interesting fatty acid. Gram for gram, butter contains more butyrate than any other food.

On the positive side, research suggests that butyrate may;

More research via human studies is necessary to ascertain the effects of butyrate on human health properly.

Now that we have examined the benefits, here are some potential drawbacks to consider.

1) Butter Can Burn At High Temperatures

As we looked at earlier, butterfat is one of the most heat-stable fats, and it does not oxidize easily.

However, the problem here is that butter doesn’t only contain fat; butter is also a source of protein and sugar (milk solids).

Unfortunately, the sugars and proteins in butter cannot withstand the same temperatures as the fat can.

In other words; the milk solids will burn and start to brown before the butterfat reaches its smoke point.

For this reason, ghee, which is 100% pure butterfat, performs better than butter at high temperatures.

Ghee also has a much higher smoke point (24).

See here for more on the differences between butter and ghee.

Key Point: The milk solids in butter can burn at high temperatures. As a result, ghee is more suitable for high-heat cooking.

Lactose intolerance and milk protein allergies are relatively common, and they affect millions of people around the world (25, 26).

Although butter only contains low concentrations of sugar (lactose) and protein solids, these small amounts can still be enough to cause adverse reactions.

To illustrate this; research demonstrates that butter can sometimes cause issues for people with intolerance to lactose or milk protein (27, 28).

Butter is primarily a source of saturated fatty acids.

While not all saturated fats have the same effect, some types of saturated fatty acids can cause plasma levels of LDL-C to rise (29).

On this note, the saturated fatty acids which have the most significant effect on LDL levels are lauric acid, myristic acid, and most of all, palmitic acid (30).

With this being said, which are the most predominant fatty acids in butter?

For those who wish to know the individual saturated fatty acids contained in butter, the table below shows this fatty acid breakdown (4);

As we can see from the table, palmitic acid is the most concentrated fatty acid in butter.

Therefore, it is not surprising to see randomized trials demonstrate that butter can lead to higher levels of LDL (31).

Some researchers believe that limiting butter consumption is important because higher LDL-C levels are associated with cardiovascular risk (32).

However, it is worth remembering that an association does not automatically infer causation.

Furthermore, some researchers point out that butter also raises HDL levels, which is associated with reduced cardiovascular risk. The fatty acids in butter also tend to increase larger LDL particles rather than the more atherogenic smaller particles (33).

Unfortunately, there is no conclusive science in this area, and research is ongoing.

Key Point: Butter can increase LDL (and HDL) levels. Some researchers believe this represents an increased cardiovascular risk, while others disagree.

Research On Butter and Cardiovascular Disease

As we have just discussed, some people have concerns over the potential LDL cholesterol-raising properties of butter.

However, what research is available on how butter directly affects cardiovascular risk?

This study found that butter “was not significantly associated with any cardiovascular disease” (32).

Other studies analyzing the cardiovascular risk posed by dairy fats have made similar findings.

For example, several meta-analyses and systematic reviews find that dairy fat has a neutral/positive impact on cardiovascular risk (33, 34, 35).

Butter often makes front page new, and the media tends to either overhype or overly-demonize it.

The truth is probably somewhere in between these two positions.

While butter is not a significant source of nutrients, it does offer a fair amount of vitamin A and several other, potentially beneficial, compounds.

Although large intakes of butter can lead to higher LDL levels, there is no evidence directly linking it to cardiovascular disease.

Overall, I would say that, in reasonable amounts, butter is a perfectly healthy ingredient that adds a delicious flavor to food.

Love the write-up. Agree that moderation to its consumption is the ultimate enjoyment.

Butter is not a significant source of polyunsaturated fat (less than 0.4 grams per serving) and thus barely contains either omega-3 or omega-6.

The biggest difference with butter from purely grass-fed animals is the extra conjugated linoleic acid (CLA) it offers, which is mentioned in the ‘benefits’ section.