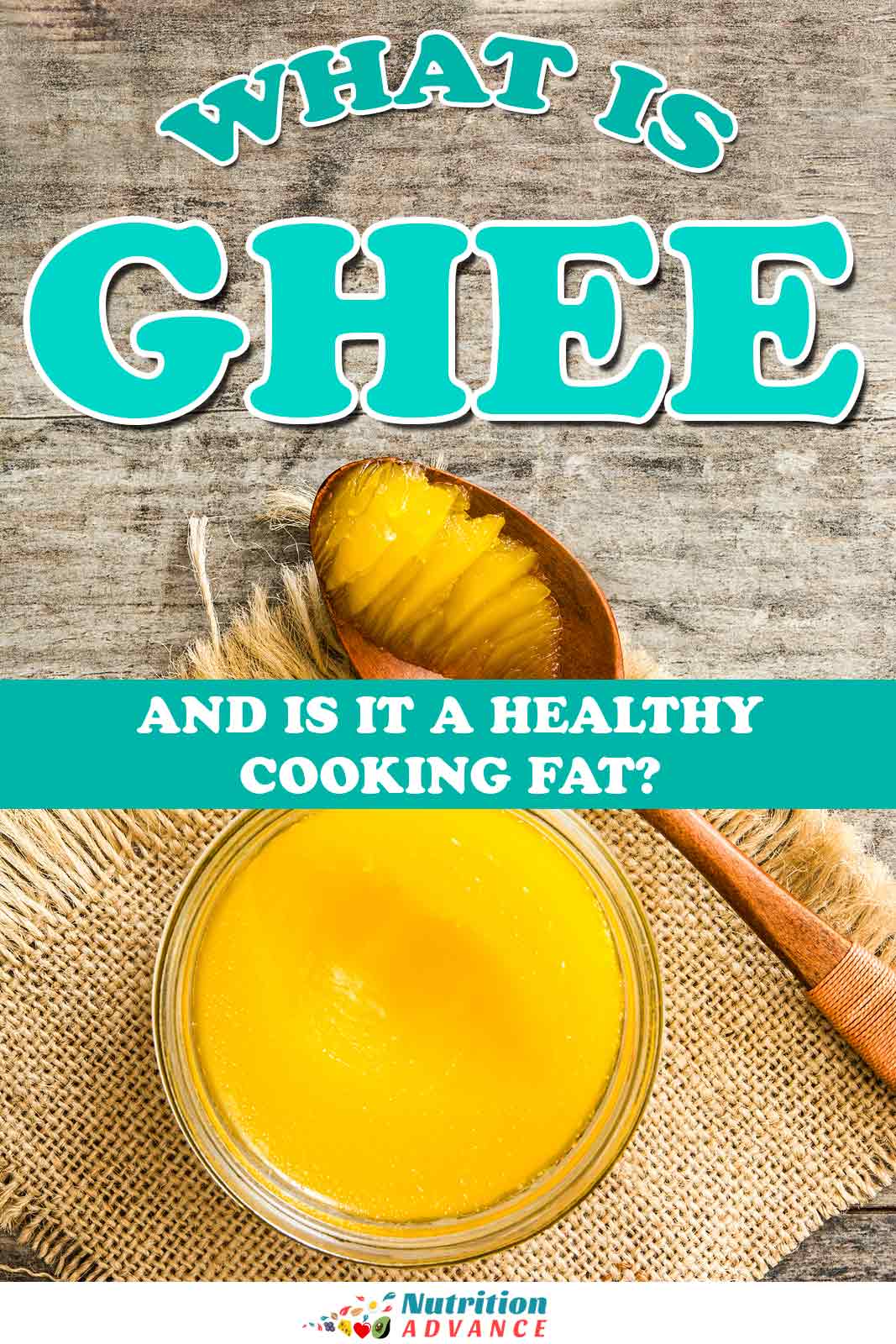 Ghee is a delicious cooking fat made from butter.

But does it have any drawbacks? And is it a healthy choice of cooking fat?

This article examines the nutrition profile of ghee alongside its potential benefits and disadvantages. 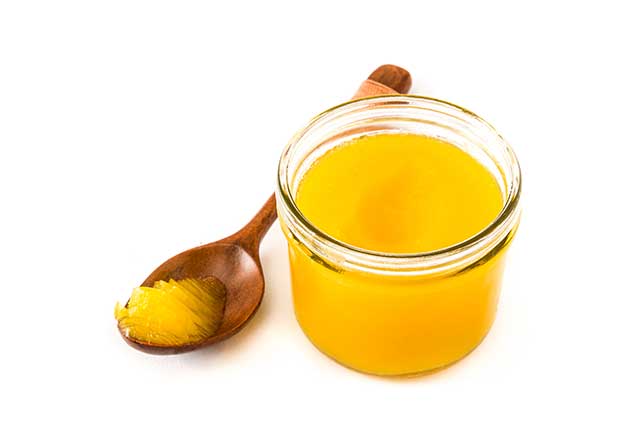 Ghee is popular throughout India and the Middle East, and its origins are thought to go back to 1500 BC.

While ghee is very similar to butter, it contains no lactose (milk sugar), protein or moisture.

As a concentrated source of butterfat, ghee has a rich and buttery taste, and it is more resistant to burning at high temperatures.

The production of ghee is straightforward, and it merely involves heating butter so that the water/moisture evaporates.

Additionally, the heating process browns the milk solids (proteins and lactose) in the butter, which are then removed by straining.

The result is tasty, pure butterfat.

Key Point: Ghee is pure butterfat made by removing the milk sugars, proteins, and moisture from butter.

Since ghee is an isolated source of fat, it is not particularly high in nutrients.

The tables below show the nutrition profile of ghee in full per tablespoon serving (13 grams) (1);

However, none of these minerals are present in meaningful amounts (less than 1% of the RDI).

Key Point: Ghee is a significant source of fat, primarily saturated fatty acids. It is also a source of fat-soluble vitamins.

Perhaps the most important considerations for any cooking fat is how resistant it is to oxidation.

At high temperatures, fatty acids can quickly break down and oxidize. When this happens, they create volatile ‘polar compounds’ that can harm human health (2, 3).

Firstly, ghee is predominantly saturated fatty acids, which happen to be the most stable types of fat. As a result, the fatty acids in ghee are less likely to oxidize when exposed to high heat during cooking (4, 5).

Additionally, one recent study demonstrated that heating ghee at a temperature of 180°C (356°F) for up to 30 minutes resulted in zero molecular changes to the oil (6).

In other words, the heating process created no unhealthy oxidation compounds.

A further study found that ghee “deteriorates more” at temperatures above 180°C and becomes rancid at anything over 250°C (482°F) (7).

Overall, ghee appears to be a stable cooking fat for typical use. For the healthiest frying/cooking, temperatures under 180°C seem to be ideal.

By comparison, some vegetable oils (such as grapeseed and Canola oil) generate large amounts of oxidation products after 30 minutes of heating at 180°C (8).

One interesting study directly compared ghee, lard, palm oil, and soybean oil regarding how much acrylamide they produced when used for frying.

Acrylamide is a potentially toxic compound that is recognized as a probable carcinogen, and it can form when frying starchy foods in oil (9).

The table below shows the concentration of acrylamide that each cooking fat produced in the study (10);

As shown in the table, ghee produced approximately 40% less acrylamide than lard and substantially lower amounts than palm olein and soybean oil.

Key Point: Ghee offers good performance at high temperatures, and it is one of the more heat-stable cooking fats.

In addition to its stable nature, ghee has various additional benefits.

Some of these are relatively modest, but they are still a nice bonus.

Since ghee is pure butterfat, there are only trace amounts of lactose and milk proteins present.

Therefore, it is likely that most individuals with lactose sensitivities would be able to consume ghee.

There is also the additional benefit that ghee is unlikely to burn while cooking since it does not contain milk proteins and sugars.

Key Point: Ghee contains minimal amounts of lactose, and it is easier to cook with since it is pure fat.

Ghee is a good source of vitamin A in its most bioavailable (retinol) form, and one tablespoon provides 8% of the RDI (1, 12).

Among its many functions, vitamin A plays a vital role in the immune system and in maintaining healthy skin and vision (13).

Alongside vitamin A, ghee also provides small amounts of the fat-soluble vitamins E and K.

Vitamin E has immune-enhancing antioxidant functions in the body, and vitamin K plays a crucial role in skeletal health and calcium metabolism (14, 15). 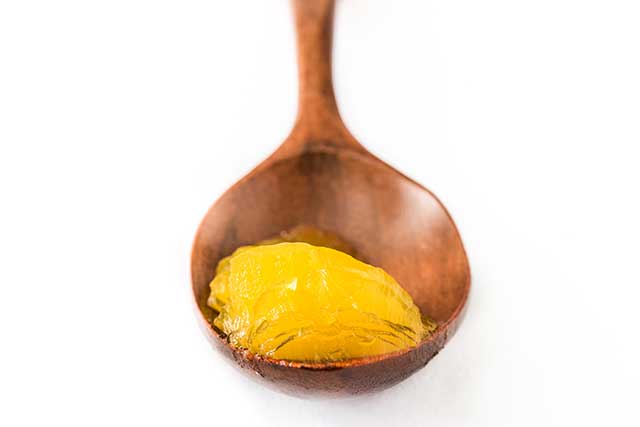 To be clear; don’t think of ghee as a good way to get omega-3 because oily fish is by far the best source for that.

However, ghee does contain a modest amount of omega-3 fatty acids.

According to the USDA Food Composition Database, a tablespoon serving offers 184 mg omega-3 in the form of DHA/EPA (1).

Other factors may influence the amount of omega-3 present in dairy foods, and products from grass-fed cows tend to contain the highest concentrations (16).

Since ghee is the most concentrated source of dairy fat, it also offers the highest quantity of CLA.

Animal studies have shown that CLA may have potential benefits for human health. For example, one study compared the effects of an energy-matched diet including either high CLA ghee, low CLA ghee or soybean oil in rats (17).

Interestingly, the high CLA diet increased blood levels of antioxidant enzymes and led to improvements in the cholesterol profile of the animals.

A recent systematic review also showed that CLA supplementation “is associated with a significant decrease in LDL cholesterol” and a “non-significantly decreased” level of triglycerides (18).

As HDL levels did not markedly change, this also improved the ratio of non-HDL to HDL, seen as a useful marker of cardiovascular risk (19).

There are also claims that CLA can help with weight loss and fighting cancer. However, existing systematic reviews and randomized controlled trials suggest that these effects are inconsistent and not clinically significant (20, 21).

Key Point: Ghee is high in CLA, which may have some health benefits.

5) May Potentially Have Beneficial Impacts On Cardiovascular Health Markers

Some studies show that ghee may have a positive influence on cardiovascular health markers.

However, other than this relatively small study, there is little other clinical research on ghee and health markers in humans. That said, animal studies involving rats appear to show similar findings (23).

More research in humans is probably necessary before giving this claim too much credence.

Key Point: Some studies suggest that ghee can improve markers of cardiovascular health, but higher levels of evidence are necessary.

There are also one or two disadvantages to be aware of regarding ghee.

Oxidized cholesterol forms when food is exposed to high temperatures and some researchers believe it may contribute to arterial calcification (heart disease) (24, 25).

On the negative side, tests show that several commercial ghee products contain oxidized cholesterol, and this is sometimes in substantial concentrations (26, 27).

The cholesterol oxidation likely happens due to commercial production processes that use excessively high temperatures when preparing the ghee.

If this is a concern, it is possible to find ghee products that use low-temperature processing, or you can always try making your own.

There is a guide on how to make ghee at home in this review of butter vs. ghee.

2) Be Careful Not To Buy ‘Vegetable Ghee’ (Vanaspati)

Vegetable ghee, otherwise known by the brand name of Vanaspati, comes from India, and it is a common alternative to ghee.

Unfortunately, this is one of the worst things you can possibly eat.

For one thing, this product is made by partially hydrogenating vegetable oil, so it is full of trans fats (28).

Key Point: “Vegetable ghee” (vanaspati) is a significant source of trans fat. Stick to the original dairy version of ghee.

Overall, ghee can be a healthy part of our diet when consumed in reasonable amounts.

It is very heat stable, allows us to cook without worrying about oxidation products, and it tastes delicious.

Just be sure to avoid the “vegetable” version.

For an in-depth look at cooking fats, see this review of 25 common options.

It’s actually rather easy to make at home, as long as you are careful not to brown the milk solids too much (which I did upon my first try. It makes a more caramel-like flavoured ghee) it should turn out rather decent.

I’ve tried this at home too and it worked quite well.

Lightly browned butter is a French culinary staple used in many preparations. I make it for almost anything starting with melted butter or sautéed in butter. Even great on popcorn!

What about the Omega 6 content which is higher than the Omega 3?

I wouldn’t worry about it personally. Generally, we only use a small amount of ghee, which does not really contain huge amounts of either.