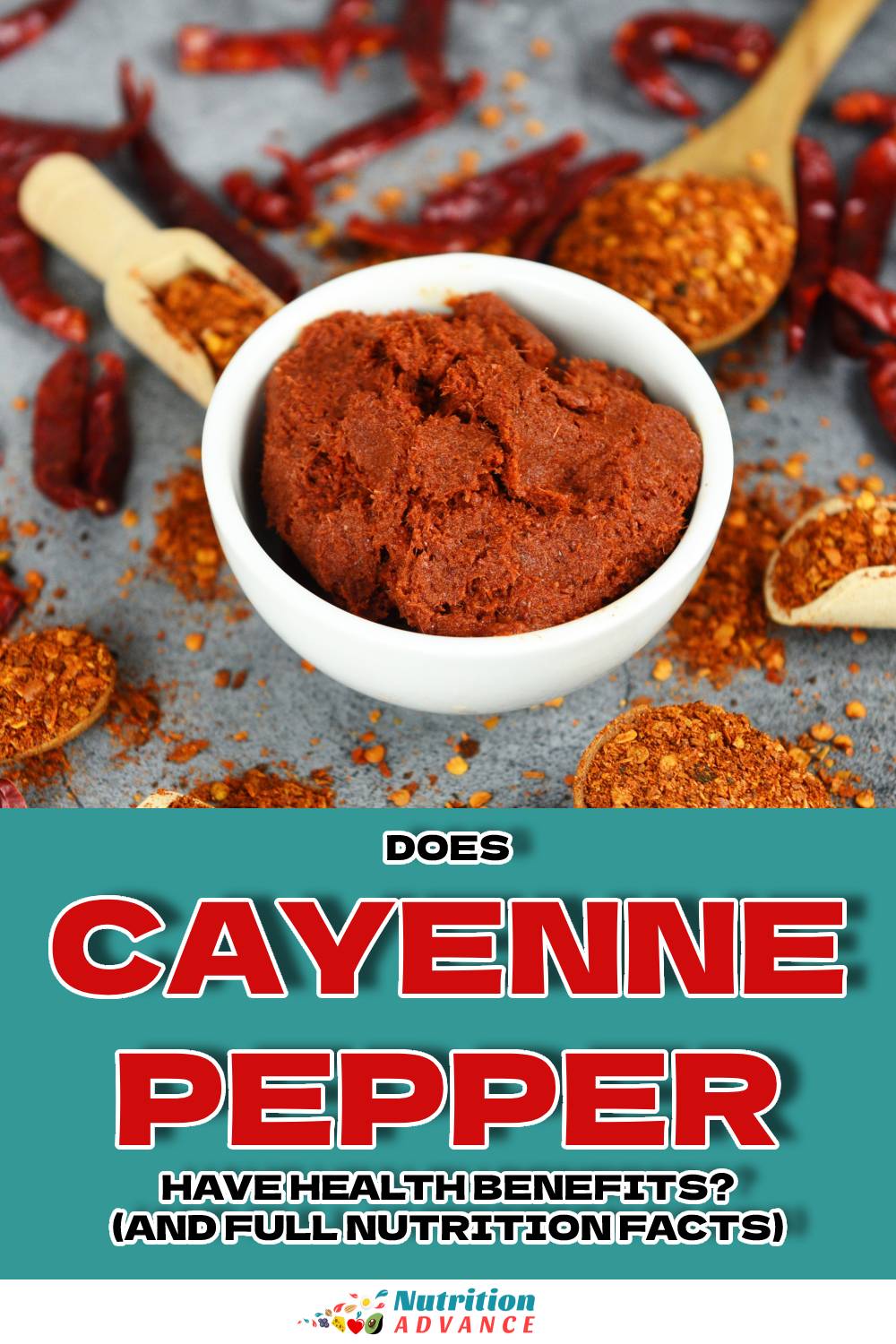 Cayenne pepper is a popular spice that adds a lot of heat to food, but does it have any potential benefits?

This article examines the nutritional properties of cayenne pepper and its potential benefits and downsides.

What Is Cayenne Pepper?

As with most chili peppers in the Capsicum family, cayenne is used for flavoring and provides heat to various dishes.

Cayenne pepper is typically sold as a dried and powdered spice, allowing a simple way to “spice up” a dish. The spice is often used in curries, hot sauces, and marinades.

Although it isn’t in the hottest bracket of chili peppers, cayenne is still one of the most widely available medium-hot chili peppers.

The “heat” of cayenne pepper depends on how much capsaicin it contains. Capsaicin is a compound responsible for the heat and “burning” feeling chili peppers can provide (3).

Cayenne pepper typically has a rating between 30,000 and 50,000 Scoville heat units, or approximately twelve times hotter than jalapeno (5).

What Does Cayenne Pepper Provide Nutritionally?

Firstly, cayenne pepper is nutrient-rich and contains many essential vitamins and minerals.

However, people use it in relatively small amounts, which limits the nutrient provision.

Daily values have been calculated using the USDA data and the FDA’s published daily values (7).

Here are some potential health benefits of cayenne pepper based on nutritional data and scientific studies involving human participants.

Offers a Broad Range of Nutrients For Minimal Calories

The nutritional data tables show that a tablespoon serving of cayenne pepper contains only 17 calories (6).

However, despite the small serving size, a tablespoon supplies:

Adding a bit of cayenne pepper to a dish is simple, and the spice is very low in calories.

Thus, it is an easy and effective way to increase the nutrient provision of a meal.

Key Point: Even a small serving of cayenne pepper provides a moderate provision of fiber, vitamins, and minerals.

Over the past decade, numerous published studies have looked into the effect of capsaicin on muscular and aerobic endurance. As previously mentioned, capsaicin is one of the main compounds found in cayenne pepper and is responsible for its heat sensation.

A systematic review and meta-analysis published in November 2022 investigated the effect of cayenne pepper on endurance performance (8).

This review examined fourteen published studies that provided a dose of capsaicin to participants before exercise:

After analyzing the results data across all included studies, there was no significant difference between capsaicin and placebo for aerobic endurance.

The most common capsaicin dose in the studies reviewed was 12 mg.

To put this dose into context, approximately 2.5 mg of capsaicin is in each gram of cayenne pepper powder (9, 10).

Thus, if consumed by one person, a 5.3-gram tablespoon serving would provide the 12 mg ‘common dose’ of capsaicin used in the studies.

A systematic review and meta-analysis published in March 2022 examined the effect of capsaicin in patients with metabolic syndrome (11).

Notably, there was a significant decrease in LDL-C levels (sometimes referred to as “bad cholesterol”) in patients taking capsaicin compared to placebo.

However, the researchers noted that the evidence is limited by the small number of patients involved in existing RCTs. Larger, high-quality RCTs are necessary to confirm capsaicin’s effect on LDL-C levels.

Alongside the potential benefits, research has highlighted some potential downsides to cayenne pepper intake.

Acid reflux is where stomach acid comes into the esophagus, and it can cause symptoms including heartburn and difficulty swallowing (12).

Reflux can be an occasional occurrence or a chronic condition known as gastroesophageal reflux disease (GERD) (13).

However, some foods are more associated with acid reflux than others, including cayenne pepper.

Furthermore, several randomized controlled trials have shown that capsaicin intake can induce reflux in healthy adults and patients with GERD (16, 17, 18).

Anyone experiencing reflux symptoms from cayenne pepper (or any food) should discuss this with their medical team/doctor.

Although rare, allergies to cayenne pepper have been reported in the scientific literature (19, 20).

According to the American Academy of Allergy, Asthma & Immunology, there have been several case reports of severe allergic reactions (anaphylaxis) to cayenne pepper (21).

Key Point: As with any food, allergies are possible. However, cayenne pepper appears to be a somewhat rare allergy.

How To Use Cayenne Pepper

Using cayenne pepper powder in cooking is quite simple, but paying attention to the dose is essential.

Since the spice is hot, starting with a smaller dose is better, and this can be increased if a spicier flavor is preferred.

Most recipes commonly call for around a teaspoon of cayenne, but this can be decreased or increased for a milder/spicier taste.

Adding cayenne pepper to the following foods and drinks can work well:

The spice is available in many sizes, but buying a larger, bulk-sized pack can be more cost-effective.

There is also a wide range of cayenne pepper products available on Amazon (disclosure: affiliate link).

Cayenne pepper is a popular spice that can enhance the flavor of food.

Scientific research has highlighted some further possible benefits, such as its potential ability to improve muscular endurance and lower LDL-C levels.

That said, more research is necessary to confirm these potential benefits.

Overall, cayenne pepper has a good nutritional profile and provides a moderate amount of vitamins and minerals, even in small doses.