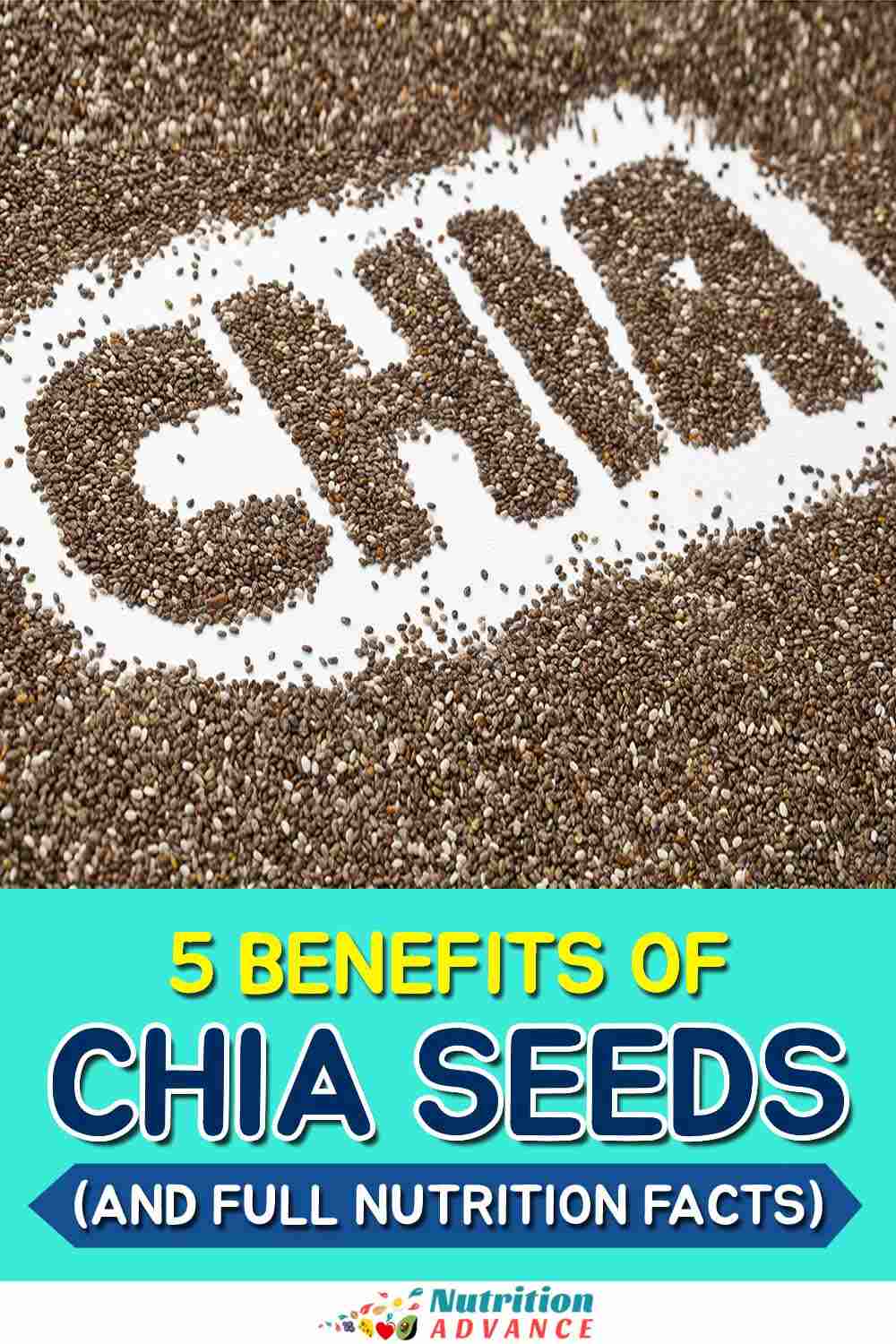 This article looks at some of the potential benefits of chia seeds, alongside their full nutrition facts. 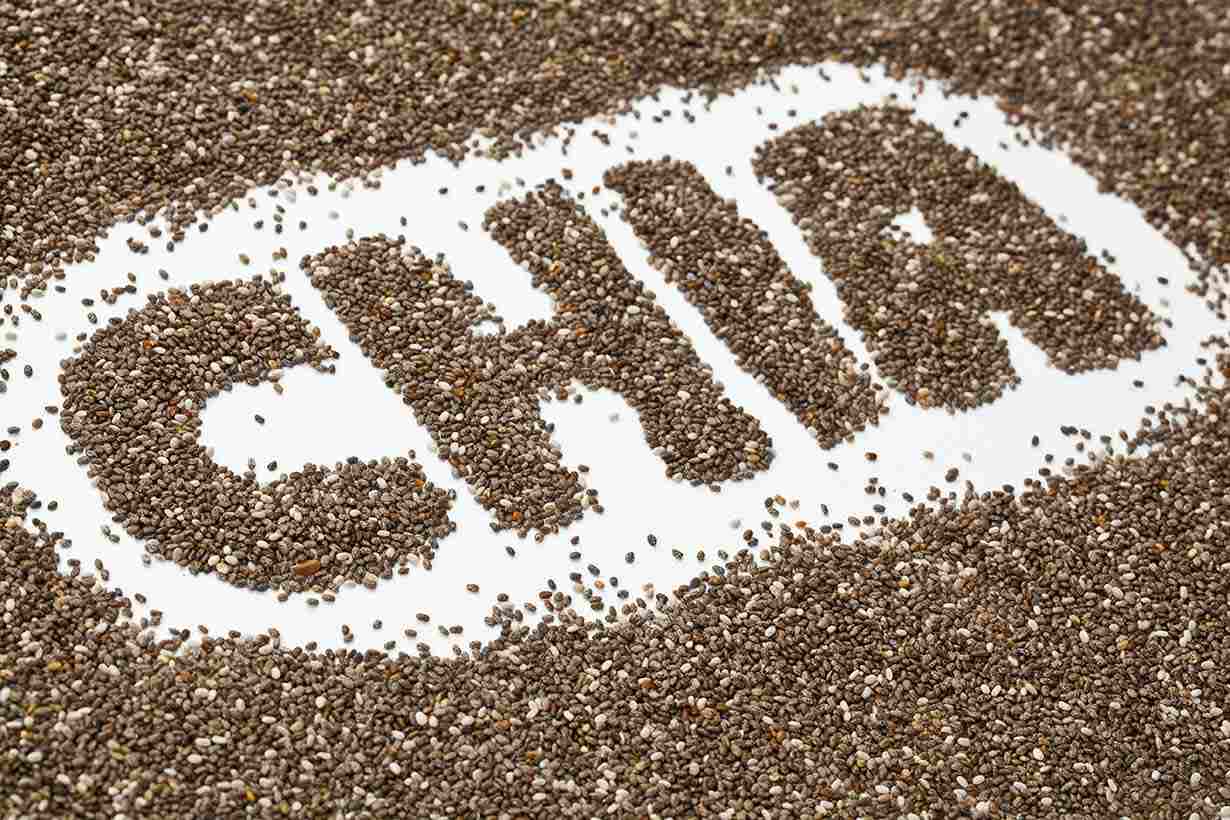 1) Chia Seeds are Packed With Fiber

Chia seeds are among the most fiber-rich foods. In this regard, just a one-ounce (28-gram) serving offers 9.75 grams of fiber (1).

According to the recommended daily value for fiber, which stands at 28 grams, one ounce of chia seeds provides 35% of the daily value (1, 2).

Interestingly, almost all the carbohydrate content of chia seeds is fiber, and the seeds are approximately 40% fiber by weight.

For anyone trying to increase their diet’s fiber content, chia seeds offer a simple way to increase intake substantially.

Key Point: Chia seeds are one of the best dietary sources of fiber.

2) Chia Seeds May Have Benefits For Satiety and Reducing Appetite

Satiety refers to the feeling of being satisfied and full during the period after a meal.

Foods that improve feelings of satiety can reduce subsequent food intake. As such, they may contribute to weight control (8).

On the positive side, it is thought that chia seeds are a beneficial food choice for their contribution to satiety.

These studies show that adding a small amount of chia may lower appetite and reduce food intake over the day.

Perhaps due to their effect on satiety levels, chia seeds may help support weight loss efforts. However, the available evidence to support this is mixed.

For example, one randomized study featuring 76 participants found that 25 grams of chia seed twice daily for two weeks had no impact on weight loss compared to placebo (12).

However, in another randomized controlled trial, participants were given 35 grams of milled chia flour or placebo each day for 12 weeks. The study results showed that the participants in the chia group experienced small but significant reductions in overall weight and waist circumference (13).

In a randomized controlled trial featuring overweight patients with type 2 diabetes, chia seed supplementation was investigated for its effect on body weight. The study split 77 participants into two groups: one group consumed 30 grams of chia each day, while the other group used an oat bran-based control.

Interestingly, this study demonstrated that the participants in the chia group lost more weight. Over six months, the chia seed group had lost approximately 1.5 kilograms more than the control group (14).

Despite some promising results, the strength of evidence to support weight-loss results is too weak to make strong claims.

Key Point: Some studies show that chia seeds may support weight loss. However, at present, the evidence for this is mixed and relatively weak.

This effect was clearly displayed in a randomized controlled, dose-response trial. In this trial, chia seed consumed alongside bread attenuated blood sugar levels in a dose-dependent manner (15).

It is thought that the high fiber content of chia seeds is responsible for the reductive effect on postprandial glucose.

Fiber slows down the digestion of food, which increases the time over which carbohydrates are absorbed. As a result, the blood sugar response to carbohydrate-containing foods falls as the fiber content of that meal increases (16, 17).

However, it is worth noting that this omega-3 comes in the form of alpha-linolenic acid, known as ALA for short.

ALA is a form of omega-3 found in plants, but the human body must convert it to eicosapentaenoic acid (EPA) and docosahexaenoic acid (DHA) before being able to use it. EPA and DHA are the biologically active forms of omega-3 within the body (18, 19).

Unfortunately, the human body can only convert ALA to EPA and DHA at very low levels, with most estimates placing the true conversation rate anywhere between 1% and 15% (18, 20).

As a result, it is still important to consume EPA/DHA from seafood or supplements.

However, even if the true ALA to EPA/DHA conversion rate was under 10%, chia seeds may still benefit omega-3 levels since they contain more than five grams of ALA omega-3 per ounce serving.

Key Point: Chia seeds are a good source of ALA omega-3. This form of omega-3 needs converting to EPA or DHA for the body to use it, though, and the conversion rate tends to be low.

Note: There Is a Lack of Evidence To Support Strong Health Claims About Chia Seeds

Chia seeds indeed contain a good combination of fiber, healthy fats, and essential nutrients. Due to this, they can likely have beneficial effects as part of a healthy dietary pattern.

However, chia seeds have only been a common part of human diets over the past decade. For this reason, there is still very little evidence from human trials on their effects on human health.

As referenced in this article, a small number of studies show potential benefits from chia seeds, particularly regarding satiety and blood sugar control.

However, a recent systematic review and meta-analysis looked at the clinical evidence for supplementing diets with chia seeds (21).

This review points out that the existing evidence supports further research into the dose-response effects of chia seeds. However, the review also correctly asserts that the current evidence does not support strong health claims about chia’s effects.

In other words: the seeds may have benefits, but it is best to treat claims that sound too good to be true with a pinch of salt.

Key Point: Chia seeds are nutritious, but be wary about claims that over-hype their benefits.

Based on data sourced from the USDA’s FoodData Central database, here are the full nutritional values for chia seeds (1).

Daily values have been calculated using the most recently published recommended daily values (2).

Here is the vitamin and mineral content per ounce (28-gram) serving of chia seeds.

The daily values have been calculated using USDA nutritional data and the most recently published daily values (1, 2).

Chia seeds are a good source of B vitamins, especially niacin and thiamin.

As shown above, chia seeds contain a broad range of essential minerals. Among these minerals, they are particularly rich in manganese, copper, selenium, and magnesium.

Note: if looking for seeds that offer a rich source of minerals, hemp seeds are extremely mineral-dense.

Chia seeds are also a rich source of polyphenols, with a test showing that the dry seeds contain 8.8% phenolic compounds by weight (22).

Among the polyphenols chia seeds provide, they are particularly high in (23, 24):

Key Point: Chia seeds provide a mix of carbohydrate, fats, and protein. They also supply a wide range of vitamins and minerals.

How To Eat Chia Seeds

When first trying chia seeds, it can be hard to know what to do with them.

There are (rare) case studies where consuming the seeds dry has led to an obstruction in the esophagus (22).

Similar to poppy seeds, chia seeds are most often consumed as an ingredient in food. Most often, they are mixed into yogurts, drinks, and other liquids.

Although they don’t have a strong flavor, chia seeds take on the flavors from foods they’re eaten alongside. They have a crunchy texture and change to a gel-like consistency when soaked due to the seeds’ high soluble fiber content.

Generally, the seeds develop a gel-like consistency when added to liquids over a period of 20 to 30 minutes.

Here is a range of ways in which we can eat the seeds:

Key Point: We can eat chia seeds in a wide variety of ways, most of which involve soaking the seeds in liquid.

Just a small serving of chia seeds offers a broad range of nutrients for minimal calories, including protein, fiber, fat, and essential micronutrients. Thus, they likely provide a beneficial contribution to the average diet.

There is also some promising research on the seeds’ potential health benefits, but more research is necessary to develop a clearer picture.

However, it is better to ignore claims of chia seeds being a “superfood” – these are driven more by marketing than anything else.

12 Types of Edible Seeds and Their Benefits

The Benefits of Hemp Seeds (and Full Nutrition Facts)