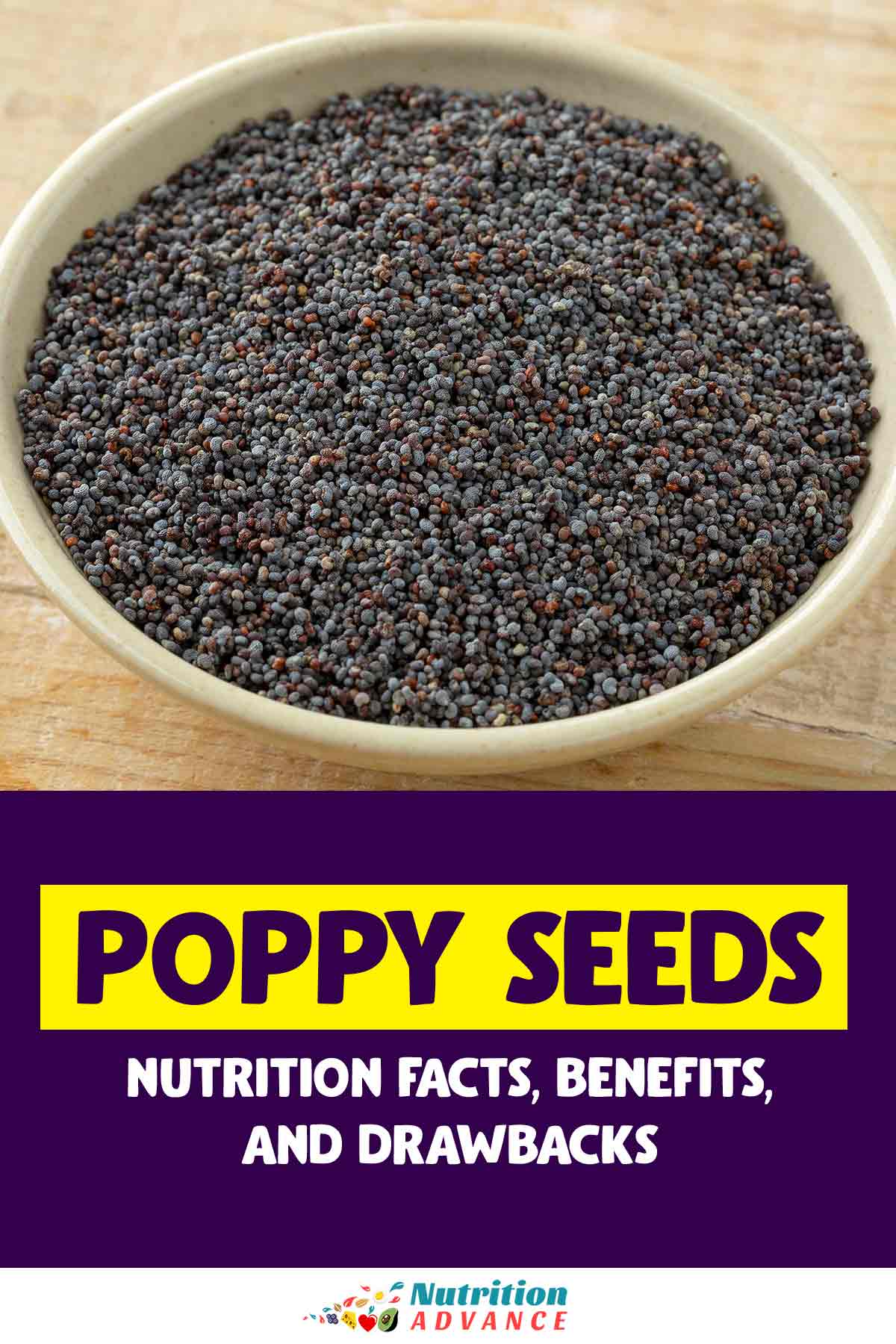 Poppy seeds are the edible seeds of the poppy plant.

These seeds are a popular ingredient in baking, and they can be used to flavor a wide variety of cooked dishes.

Interestingly, poppy seeds are among the most nutritious edible seed options, and they provide a broad range of nutrients.

This article examines the nutritional values, benefits, and potential downsides of poppy seeds, as well as how to use them.

What Are Poppy Seeds? 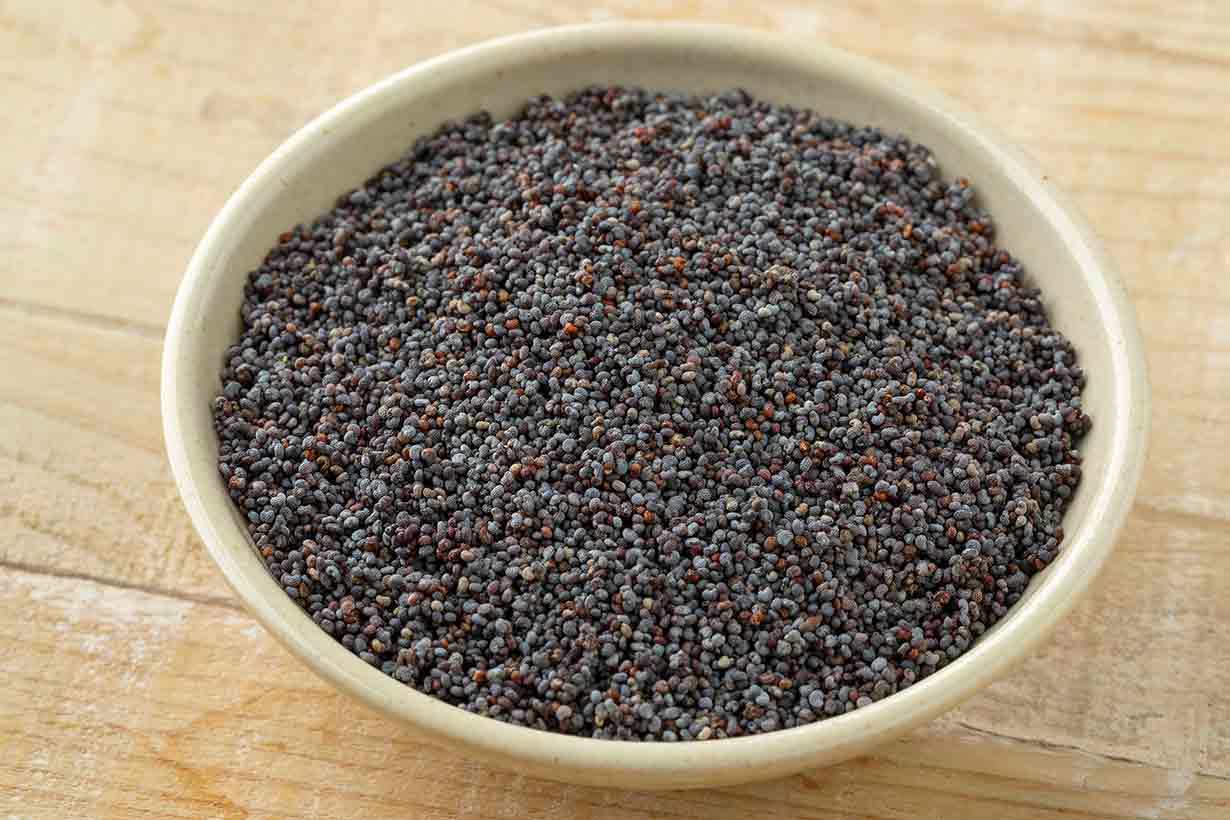 The poppy plant, known botanically as papaver somniferum, is infamous for its role in opium production.

However, one part of the plant is legally available to buy as food: poppy seeds.

Poppy seeds are the only part of the plant that is legal to purchase because they contain minimal concentrations of opium alkaloids (1).

The seeds have been popular since the days of Ancient Greece, with Hippocrates himself acknowledging their nutritive properties (2).

While poppy seeds grow around the world, most of the largest producers are nations within Europe, and the Czech Republic has the highest production (3).

Similar to hemp seeds, poppy seeds are tiny, and they have a crunchy texture.

Although poppy seeds can be eaten alone, they are usually used as a spice. They can be added to savory dishes and used as a topping on bakery goods. In this way, they are a flavor enhancer similar to sesame seeds, and we can often see them sprinkled on bread buns and baguettes.

Like other seeds, they are also a rich source of dietary fat, fiber, and protein.

Key Point: Poppy seeds are a type of seeds often used to enhance the taste of various dishes and food products. They are small and crunchy.

Unlike most other varieties of seeds, poppy seeds are not a significant source of omega-3.

For omega-3 rich seeds, chia and flax seeds are both good options.

The majority of the carbohydrates in poppy seeds are fiber with a small amount of starch and sugar.

Poppy seeds contain a significant amount of dietary fat, most of which is the omega-6 polyunsaturated fatty acid linoleic acid (5).

Poppy seeds are among the most concentrated plant sources of protein, and they are approximately 18% protein by weight (4).

Poppy seeds are a reasonably good source of B vitamins, and they also provide moderate amounts of vitamin E.

Calculated from USDA data and daily values published by the FDA, here is the full vitamin profile per tablespoon serving and per 100 grams (4, 6):

Generally speaking, all seeds offer a broad range of minerals in significant amounts.

Poppy seeds are no different, and they are particularly high in calcium, copper, iron, magnesium, manganese, and zinc.

Per tablespoon serving and per 100 grams, here is the mineral content (4, 6):

Poppy seeds are not as well known as other edible seed varieties. Perhaps due to this reason, there is very little scientific research on their potential health benefits.

However, as a rich source of fiber, protein, vitamins, and minerals, they do offer a lot of nutritional value.

Approximately 70% of the carbohydrates in poppy seeds is fiber, which can have several beneficial roles in the body, including:

On this note, it may be worth looking at chia seeds, which provide even higher amounts of fiber.

Additionally, since poppy seeds contain a substantial quantity of minerals, adding a handful to food would be a simple way to increase mineral status.

On the negative side, there are also some potential drawbacks to be aware of regarding poppy seed intake.

May Cause False Positive Drug Tests

As previously covered, poppy seeds are legal and edible food. They are very different from parts of the poppy plant purposefully processed to create opiates.

However, on rare occasions, the seeds have unfortunately resulted in false-positive drug test results for athletes and workplace drug-testing programs (10, 11).

On this note, a case report titled ‘False-Positive Urine Drug Screen: Beware the Poppy Seed Bagel’ explained how poppy seed intake might occasionally lead to a positive test due to trace amounts of opiates (12).

Why Do False-Positive Tests Happen?

The reason for these false-positive tests is that poppy seeds can contain trace amounts of the opiate alkaloids morphine and codeine. While such small amounts are unlikely to be a health concern, research confirms that poppy seed ingestion is a potential risk for false-positive drug tests to these compounds (13, 14).

However, it is worth noting that this phenomenon is rare. To avoid the possibility of false-positive tests, the ‘limit of detection’ used in drug tests for these opiate alkaloids is generally 2000 ng/ml (equal to 2000 ug/l) (15).

In 264 sample tests collected after poppy seed ingestion, only three of these samples had opiate levels higher than 400 ng/ml (16).

That said, it may be possible that specific batches of poppy seeds contain much higher amounts of opiate alkaloids than others, or that the quantity consumed or timing of tests affects the result.

For example, another study investigated the effect of healthy participants ingesting 45 grams of poppy seeds on urine concentrations of morphine and codeine. Interestingly, 26.6% of the samples taken exceeded the 2000 ug/l positive detection limit for morphine but were negative after 19 hours (13).

This study shows that ingesting large amounts of the seeds may be sufficient to cause a positive result in a workplace or athletic commission drug test.

For this reason, the USADA recommends that all athletes avoid consuming poppy seeds from a few days before competitions start until the end (17).

Key Point: Poppy seeds contain trace amounts of codeine and morphine, which may be enough to cause a positive drug test result.

Although rare, there have been documented allergic reactions to poppy seeds (18, 19).

There does seem to be some cross-reactivity with tree nuts (such as walnuts and chestnuts) and pollen. In other words, individuals with such allergies are more likely to have allergic reactions to poppy seeds (19, 20).

Phytic acid, also known as phytate, is a compound that acts as a storage form for phosphorus in plant foods. Poppy seeds contain a significant amount of phytic acid.

Like many other nutrients and compounds, phytic acid may have both benefits and drawbacks.

On the positive side, research shows that phytic acid may have antioxidant properties and might help to attenuate oxidative stress and prevent lipid peroxidation. Long-term, higher levels of oxidative stress can raise the risk for a variety of chronic diseases (21, 22, 23, 24).

However, phytate also has some undesirable effects due to its ability to bind to essential minerals. When consumed alongside iron, zinc, and calcium, phytate can impair the absorption of these minerals, thereby raising the risk of potential mineral deficiencies (27, 28).

That said, it is worth remembering that the presence of phytic acid does not mean we don’t absorb any of the minerals that are present. Their absorption is impaired rather than inhibited, and phytate-containing foods still offer a good range of nutrients.

Furthermore, in a recent review paper published for the European Society for Clinical Nutrition and Metabolism, the researchers concluded that “the medicinal values of phytic acid outweighed its negative impact” (27).

Key Point: Poppy seeds contain phytic acid, which can have a range of effects in the human body – some good, some bad.

How To Use Poppy Seeds

For those who have some poppy seeds and are unsure of how to use them, here is a quick summary of how they can be used.

Although they can probably help to flavor a wide range of foods, the seeds are commonly used in baking and Indian-style cooking.

Poppy seeds are often used as a crunchy topping on top of bread rolls and baguettes.

For some examples, see this wide range of recipes.

Poppy seeds are widely used as a spice in Indian cuisine.

In particular, they are a popular ingredient in various curries as they help to enhance the flavor.

There is a tasty meat-based example recipe here and a vegetarian curry here.

Although they don’t have as much visibility as other seeds such as sesame and chia, poppy seeds are both tasty and nutritious.

The seeds provide a broad range of essential nutrients, and they are particularly rich in manganese, copper, calcium, and magnesium.

12 Types of Edible Seeds and Their Benefits

The Benefits of Hemp Seeds (and Full Nutrition Facts)