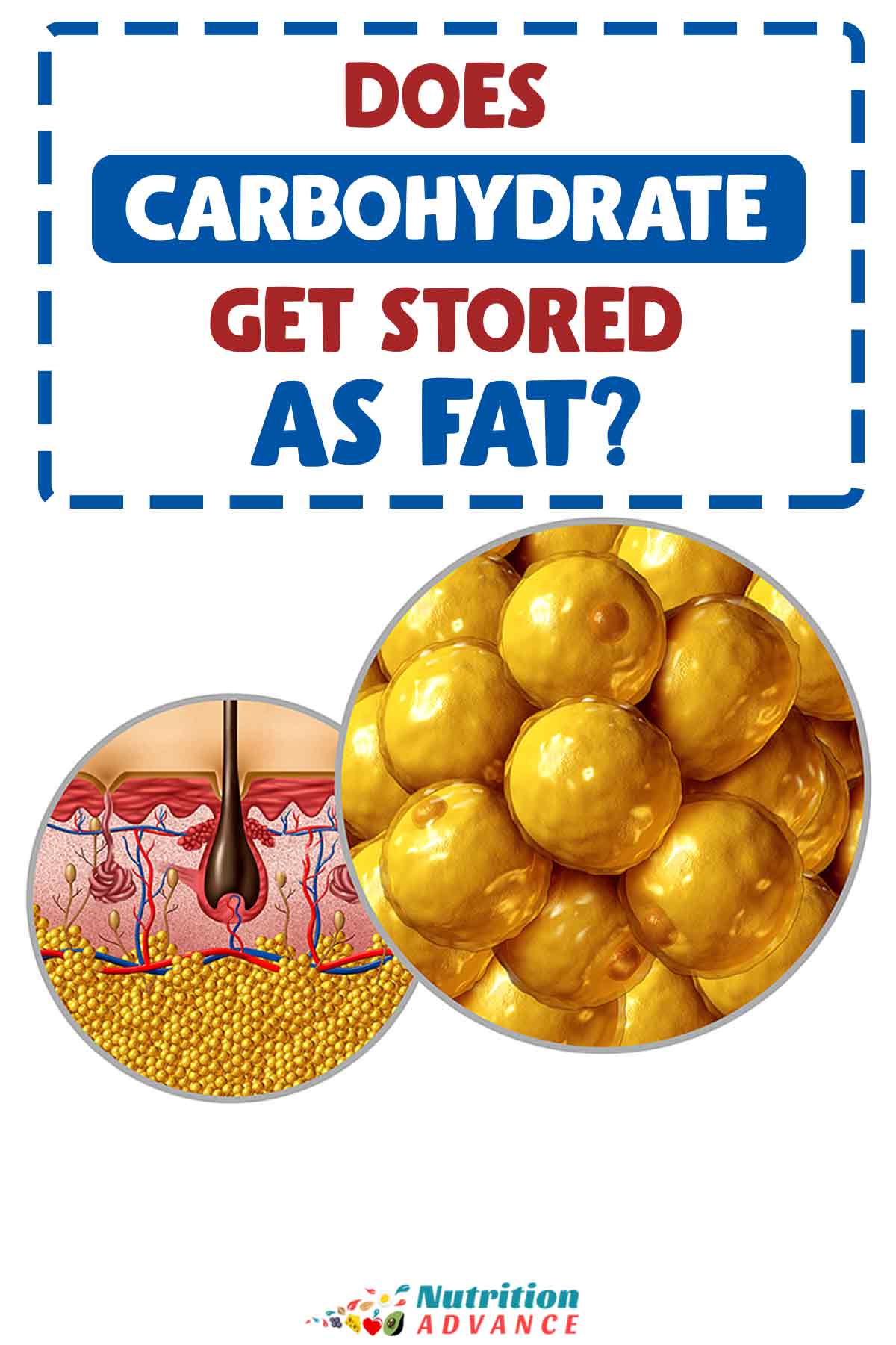 There is a relatively common claim that carbohydrates get stored as fat at high intake levels.

However, this is a bit of a nutrition myth.

While carbohydrates can be stored as fat, this usually does not happen in a significant manner.

This article will provide a simple overview of what happens when we eat carbohydrates and the circumstances in which they would be stored as fat.

What Happens When We Eat Carbohydrate?

Firstly, let’s take a very simplified look at what happens when we consume dietary carbohydrates.

When we consume carbohydrates, enzymes within the body break them down into simple sugars, which then enter the bloodstream. When in the blood, these sugars are known as “blood glucose” (1).

The Role of Insulin and Glycogen Storage 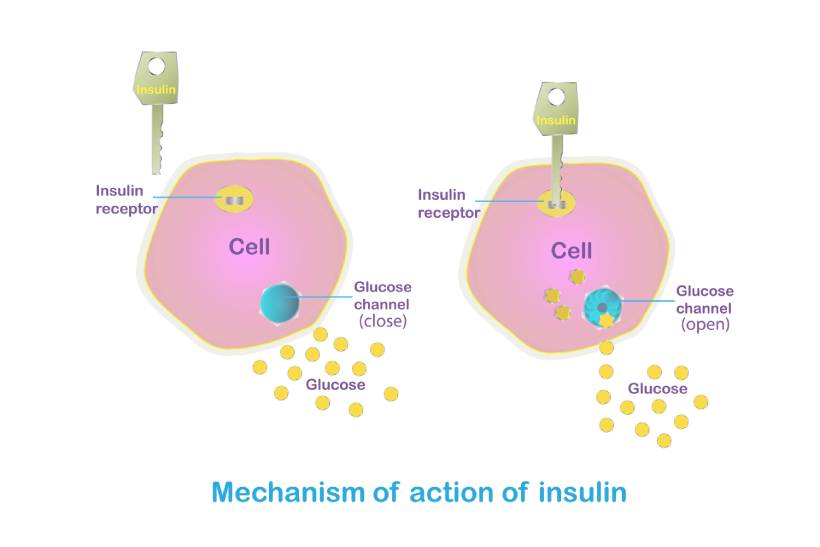 The major role of insulin is to promote glucose uptake in the liver and muscle cells all around the body (3).

If the body can sufficiently meet immediate energy needs, glucose entering the cells is stored in the form of glycogen. Glycogen is sometimes referred to as the human body’s ‘storage form of glucose’ for later use (4, 5).

The process of converting sugars into glycogen is known as glycogenesis.

As insulin levels rise, blood glucose levels fall. This decrease in blood glucose happens because of the increased cellular uptake of glucose from the blood.

Key Point: Providing the human body has enough glucose to meet immediate energy needs, excess amounts are stored in cells as glycogen for future use.

When Does Carbohydrate Get Stored As Fat?

This scenario can occur when glycogen stores are fully saturated.

In this scenario, the further consumption of carbohydrates would lead to some of these carbs being converted to fatty acids. The process of converting carbohydrates into fat is known as ‘de novo lipogenesis’ (6, 7).

However, rather than being actually converted to fat, excessive carbohydrate intake usually leads to fat storage via different means.

How this fat storage occurs is explained by daily energy intake, energy expenditure, and oxidative priority.

The Oxidative Priority of Fuels and Overall Energy Intake

Oxidative priority refers to the preferential sequence in which the human body burns available fuels.

Dietary fat has the lowest oxidative priority, which means that the body will use carbohydrates and protein (and alcohol) before it oxidizes—or “burns”—dietary fat.

A high-carbohydrate diet that features excessive energy will lead to fat storage not because the carbs are turned into fat. Instead, the dietary fat itself isn’t being oxidized and is thus stored as fat (8).

To put this simply:

As explained above, higher carbohydrate intake can result in more body fat being stored. However, the dietary fat portion of the diet is usually stored rather than the carbohydrate itself.

It is also important to note that this does not say anything negative about carbohydrates themselves.

Excessive intake of carbohydrates and/or fat will both lead to fat storage. Likewise, a reduced energy intake diet would mean both carbohydrates and fat can be fully oxidized, and hence the body will not store fat (9).

All in all, excessive energy intake rather than a particular macronutrient is the main driver of fat storage:

Key Point: Carbohydrates have oxidative priority over dietary fat. A high-carbohydrate, high-calorie diet may result in fat being stored as adipose tissue because of low fat oxidation rates.

How Much Glycogen Can We Store Before Carbohydrates Are Converted To Fat?

If the body converts carbohydrates to fat when glycogen stores are full, then the question is: how much glycogen can we store?

The answer seems to be: quite a lot.

While total glycogen storage will somewhat vary depending on the individual, published scientific literature estimates that the human body stores approximately 500 to 600 grams of glycogen (10, 11, 12).

Furthermore, based on a ‘massive carbohydrate overfeeding’ study on human participants, the absolute capacity for glycogen storage was 15 grams of glycogen per kilogram of body weight (11).

In this study, the process of de novo lipogenesis—converting carbohydrates to fat—did not start until stored glycogen levels were approximately 500 grams. Furthermore, even at this level of glycogen saturation, it took 475 grams of carbohydrate per day to make just 150 grams of fat (11).

Although carbohydrates can “turn into fat” and get stored as body fat, this really shows that the process is inefficient and requires massive levels of carbohydrate overfeeding.

Glycogen Stores Can Be Depleted Quickly

The Role of Glucagon, Diet, and Exercise

When blood glucose levels fall, the pancreas releases a hormone called glucagon. This hormone tells the liver and muscle cells that the body requires more glucose. As a result, these cells start breaking down glycogen and releasing it back into the bloodstream as glucose (12).

This process is known as glycogenolysis, and as blood glucose rises, glycogen levels are depleted.

Key Point: Carbohydrates rarely get converted to (and stored as) fat. However, when consumed in excess, this conversion can happen at low levels via de novo lipogenesis.

19 Nutrition and Diet-Related Myths To Watch Out For

This seems over simplified as it doesn’t take into account the quantity of carbs and fats consumed per meal and their respective effects on insulin and satiety (consequently overeating). Ex. Big Mac Value meal has 190g of carbs and 1360 total calories. You’d feel starving 2-3hrs afterwards due to quick insulin spike and drop. A typical snack of some cookies, OJ/ chocolate milk and a banana would easily get you another 90-110g of carbs and around 650-800 calories. Add to that a typically high-carb/calorie breakfast and you’re already over your daily calories even if you skip dinner. On the other… Read more »

Hi Paxho, I tried to keep this simple purposefully and to solely focus on the claim that carbohydrates turn into fat in an appreciable manner (they don’t). Your point about the satiating value of various foods is a different (though very important) topic. But I’d say the ultra-processing of food (and the overconsumption of such foods) is more the issue rather than blaming either fat or carbohydrates. High-energy foods that contain a mix of carbohydrates, fats, salt, and flavorings are easy to over-consume. On the other hand, a plate full of whole boiled potatoes and boiled eggs would be extremely… Read more »

From my understanding, it is not that the carbs store as fat, but, the digestive system prefers to digest the carbs first so eating lots of carbs means that fats that are consumed are not digested but rather put aside and accumulate. I am not sure this is quiet right, but something like it.

Yes, that’s basically it. Although to be fair, the same thing would happen if you ate too much fat…so it isn’t inherently the fault of carbohydrates. The real issue is eating too much (and the various factors which encourage that).

But, when eating fewer carbs, the fats are digested rather than accumulated. It seems the fact that the digestive system goes for carbs first, does make those more impactful on the accumulation of fat. Obviously eating too much is never advisable.

It depends on how you look at it: Scenario A: over-feeding on a high-carb, low-fat diet – the body burns the carbs, but doesn’t finish burning the fat because it had too much carbohydrate to oxidize = weight gain. Scenario B: over-feeding on a low-carb, high-fat diet – the body burns the carbs, but because there’s still so much fat, it doesn’t finish burning the fat = weight gain. So, the priority isn’t really an issue because all carbs & all fat will be fully oxidized if you don’t eat too much. Ergo, the best diet is the one that… Read more »

7
Reply
Thanks for subscribing!