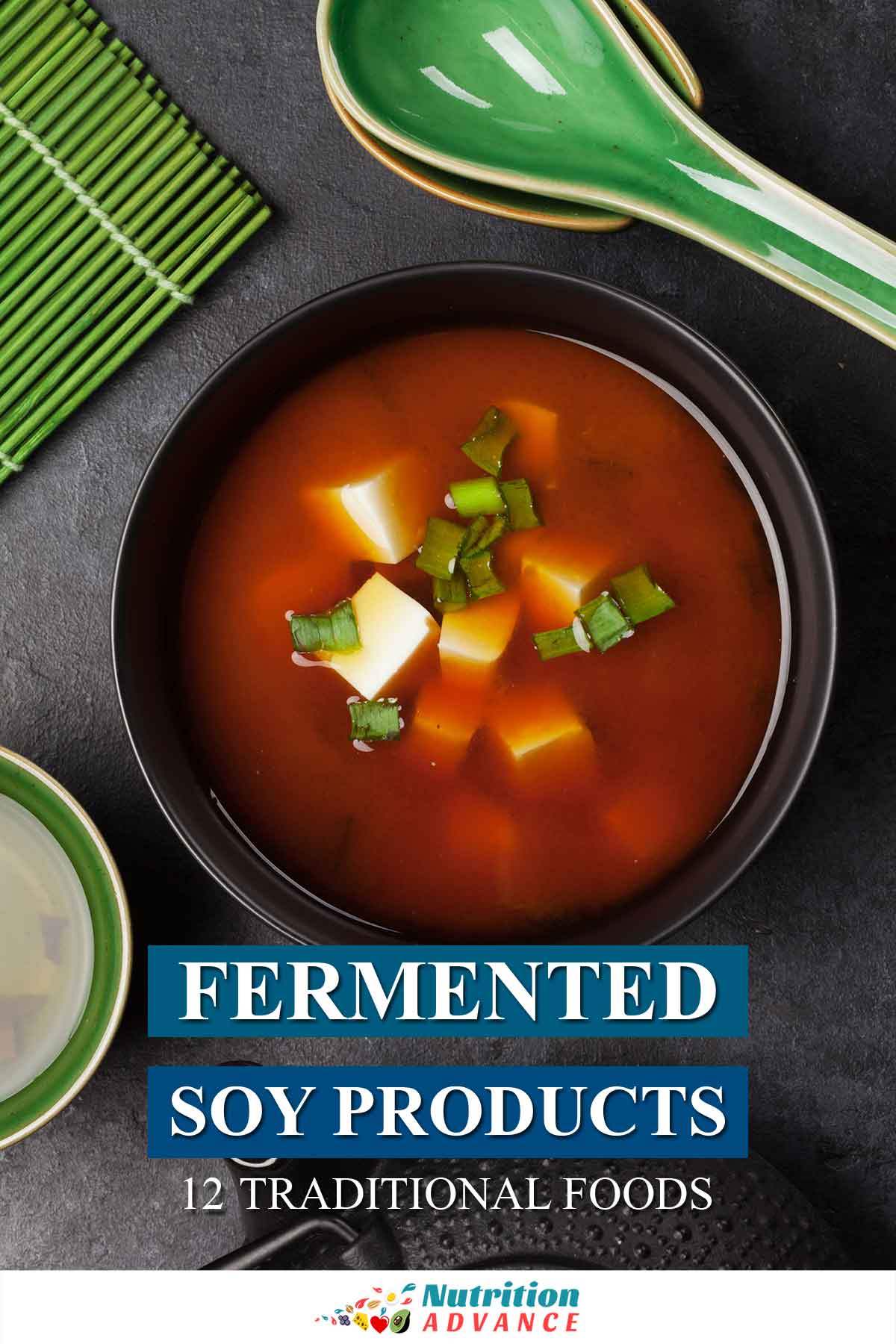 Fermented soy products are tasty, nutritious, and the fermentation process increases the bioavailability of the nutrients within soybeans (1, 2).

These foods are also very traditional, and they have enjoyed popularity in East Asia for centuries.

This article provides a guide to the culinary and nutritional properties of twelve popular fermented soy products from around the world.

Cheonggukjang is a type of fermented soybean paste that originates from Korea, and it dates back to 683 AD (3).

The paste contains both ground and whole fermented soybeans, and it is slightly similar to natto in its appearance.

However, people traditionally use it in a much different way to natto and the primary use is for making a stew.

Cheonggukjang contains large amounts of fiber, copper, thiamin, and it is one of the best dietary sources of vitamin K2 (4, 5).

Cheonggukjang is fermented using Bacillus subtilis, which is thought to have potential probiotic benefits (6, 7).

On the downside, some people are put off by the strong odor of cheonggukjang, which is commonly described as being like “sweaty gym socks.”

To find out more about cheonggukjang, see this complete guide.

Key Point: Cheonggukjang is a soybean paste used to make a popular Korean stew. It is a rich source of vitamin K2. 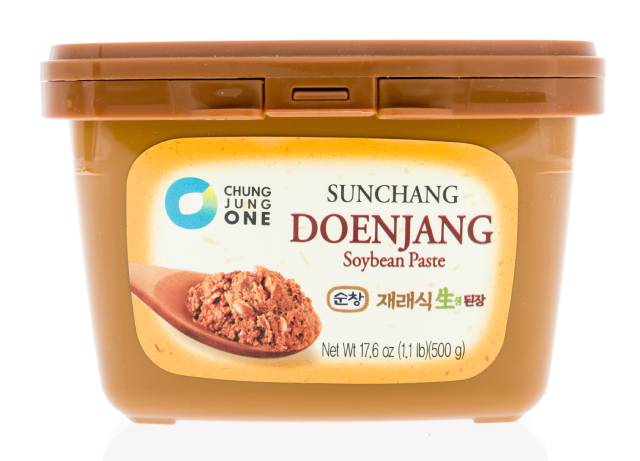 Doenjang is another fermented soybean paste from Korea; it has a stronger flavor than the Japanese miso soup, but it isn’t as strong as cheonggukjang.

The production of doenjang involves the following process (3):

Perhaps due to its milder taste, doenjang is a daily staple for many Korean people.

The paste is usually used as an ingredient to make a soup that also features garlic, onions, and possibly other seasonings such as red pepper. However, people may also use it as a flavor-enhancing condiment, in a similar way to ketchup or mustard.

Nutritionally, doenjang is a good source of protein, vitamins, minerals, and probiotics. However, it is also high in salt, and it typically contains at least 10% salt by volume (8, 9).

That said, there is little evidence from human research on doenjang.

One such study does exist, though, and this was a randomized, double-blind and placebo-controlled trial on doenjang supplementation and weight outcomes. Interestingly, the researchers demonstrated that 12 weeks of supplementation with daily doses of 40 grams of doenjang led to statistically significant weight loss compared to the control group (12).

Key Point: Doenjang is a nutritious staple in the Korean diet, and it may offer some potential benefits.

Chunjang production involves the fermentation of black soybeans, and it has a salty, bitter, and slightly sweet taste (13).

This thick and flavorful black paste is generally used for making a noodle dish known as ‘jajangmyeon’ or as a flavor enhancer in other recipes.

However, there is little available information on the overall nutritional values of this product.

Key Point: Chunjang is a black fermented paste mixed into dishes as a flavoring aid. 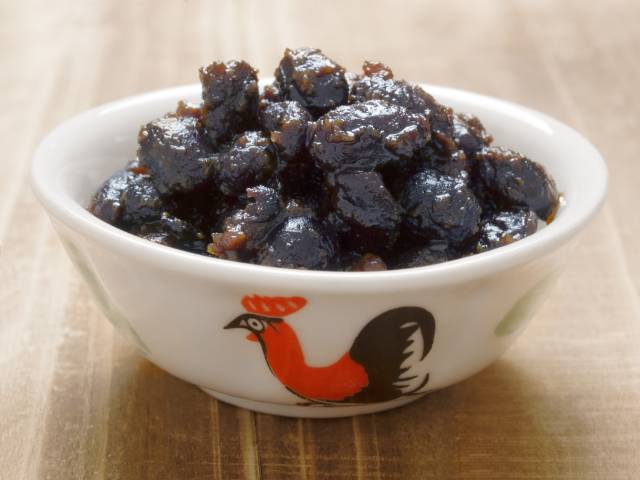 The production process of douchi involves cooking and then fermenting salted black soybeans for an often significant amount of time. For example, the fermentation of traditional douchi takes ten months (15).

Douchi is the main ingredient in Chinese black bean sauces, and it is an integral part of Chinese cuisine.

Like other whole fermented soybean products, douchi is a good source of protein, and it is high in sodium (16).

Key Point: Douchi refers to black fermented soybeans, and it is used in the production of black bean sauce. 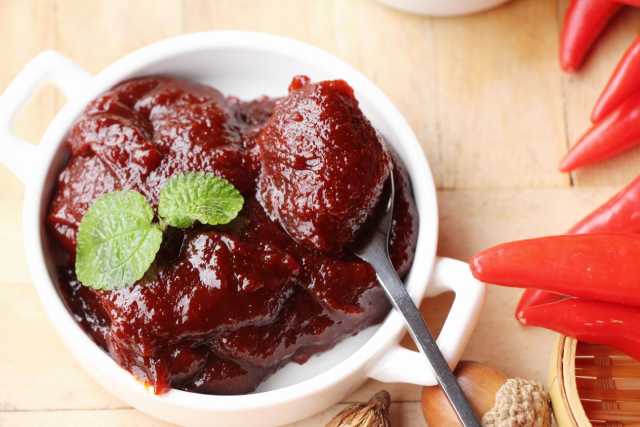 Gochujang is a salty and spicy Korean paste made from fermented soybeans and chili peppers. It has become more popular worldwide over the past few years due to the increased popularity of Korean food.

The traditional manufacturing process of gochujang first involves mixing and then boiling powdered rice alongside malt.

After this, red pepper powder, salt, and fermented soybean (meju) powder are added. The combination is then mixed and fermented for 1-2 years (17).

Other ingredients, such as sweeteners, may then also be added.

Gochujang has a slightly spicy, salty, and sweet taste, and it is used to add flavor to soups and stews, and as part of a marinade for meat-based dishes.

As one of the more popular fermented soy products, gochujang’s nutritional values are widely available. A typical (tablespoon) serving contains (18): 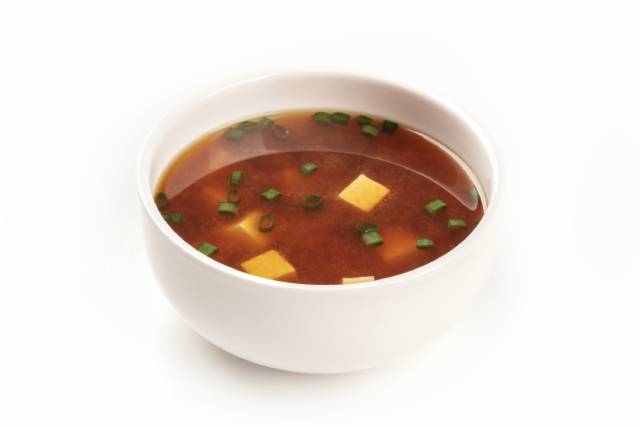 Miso is a traditional Japanese food, and it is popular around the world.

This Japanese fermented soybean paste has a unique earthy and salty taste, but it is much milder than the more pungent Korean soybean paste products.

Miso soup is a staple dish in Japan, and it is often served alongside rice. Historical records suggest that the origin of miso soup dates back to the 10th century (19).

There is no one miso paste, and the ingredients can vary from product to product. Also, the fermentation process may take anything from days to years, depending on the product (20).

See this guide to miso’s nutritional benefits for more information.

Key Point: Miso soup is a Japanese staple, and it enjoys popularity around the world. 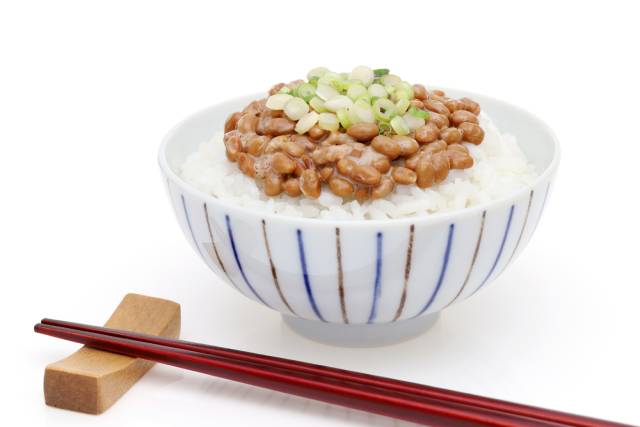 With its sticky and somewhat slimy texture, the Japanese dish natto is one of the best foods for splitting opinion.

While some people love it, others are put off by its texture and visual characteristics.

On the positive side, this traditional Japanese fermented soy product is widely recognized as the best dietary source of vitamin K2. Research suggests this underrecognized vitamin may play an important role in protecting against the development of arterial plaque in addition to strengthening skeletal bone (24, 25).

According to the National Institutes of Health, a single serving of natto may provide 850 mcg of vitamin K2 menaquinone-7. Based on the overall daily value for vitamin K, this is equivalent to 1062% DV (26).

For more on natto, see this complete guide.

Key Point: Natto is a sticky and slimy fermented soy product, and it is also the most significant dietary source of vitamin K2. 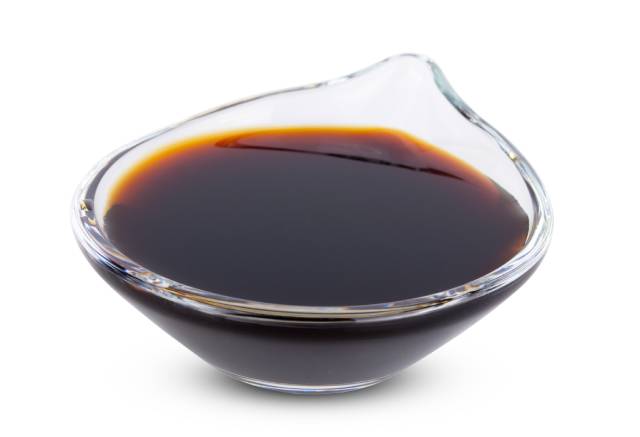 Soy sauce is a popular condiment originating from China with thousands of years of history. The first soy sauce was purportedly produced in the year 206 BC (28).

This famous seasoning sauce is typically made by a fermentation process that mixes roasted wheat and soybeans and then leaves them to ferment in brine for anything from days to months (29).

In some cases, starter cultures such as aspergillus (also known as ‘koji’) may also be used (30).

A typical serving (one tablespoon) of soy sauce provides (31):

Aside from its sodium content, soy sauce is not a significant source of vitamins or minerals.

The sauce contains significant amounts of salt, and a tablespoon serving contains 875 mg sodium (36.5% of the DV). For this reason, those who are on a sodium-restricted diet should be careful with their intake.

Soy sauce is a popular cooking ingredient, and it adds flavor to a wide range of dishes. The condiment is particularly common in Asian cooking, and it is traditionally served with raw fish dishes such as sushi and sashimi.

Key Point: Soy sauce is a flavorful, taste-enhancing sauce. However, it is a significant source of sodium. 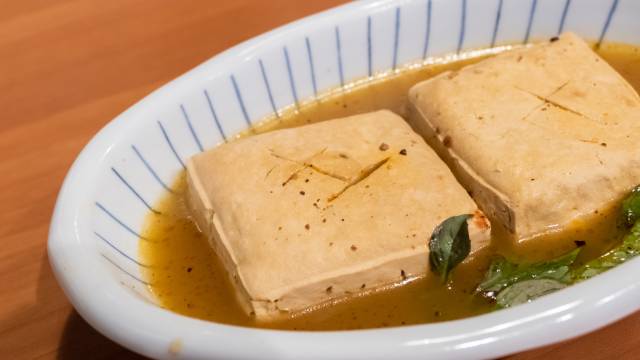 Stinky tofu is a popular fermented soy dish from Taiwan.

This traditional Taiwanese food is a fermented soybean curd that people either fry or steam. Like other soy products, it can also be used to make a flavorful stew.

That said, it is commonly served as deep-fried street food in Taiwan.

Why is it called “stinky tofu?”

The reason for the unfortunate ‘stinky tofu’ name is because this fermented food has a rather unpleasant smell.

Interestingly, research has looked into this and found that stinky tofu contains thirty-nine “volatile flavor compounds” with “strong odor characteristics” (32).

Fresh tofu is then added to the brine and left to ferment. Traditional stinky tofu products have a fermentation period of several months, but modern industrial processes may ferment it for only a day or two (33).

As a source of whole fermented soybeans, stinky tofu should be relatively nutritious, but the nutritional values are not widely available.

Key Point: Stinky tofu is a popular and nutritious street food from Taiwan with an odor that may put some people off. 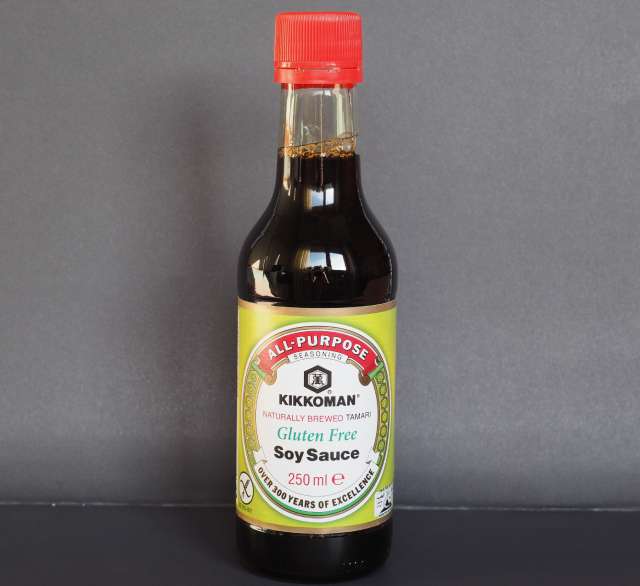 Tamari is a Japanese fermented soy product that is very closely related to soy sauce.

The only difference is that traditional tamari is predominantly fermented soy and uses no wheat or minimal amounts of wheat (34).

Traditionally made tamari is a byproduct of miso production, and it consists of the gathered protein-rich liquid that miso paste accumulates during fermentation.

Nutritionally, there is not a lot of difference between soy sauce and tamari, and they have the same culinary uses.

Tauco originated in Indonesia, and it is a sauce made from fermented yellow soybeans.

Production of tauco involves boiling yellow soybeans, pulverizing them, and then mixing them with flour. Bacterium strains Aspergillus oryzae and Rhizopus oligosporus, which are two types of fungus used as starter cultures are added, and the mixture is then left to ferment for several days.

The result is a thick soybean paste, which then soaks in brine for further fermentation over 15-30 days. Finally, after the second fermentation stage, producers add sugar and water to make a sauce-like product (35).

Tauco has a strong, salty flavor, and its main uses are as a seasoning used in stir-fried dishes. It can also be used as a condiment to add flavor to food.

As tauco is a sauce used in small amounts, it is not a significant source of nutrients. However, here are the basic nutritional values per 100 grams of the sauce (36):

Key Point: Tauco is a popular sauce product made from fermented soy. 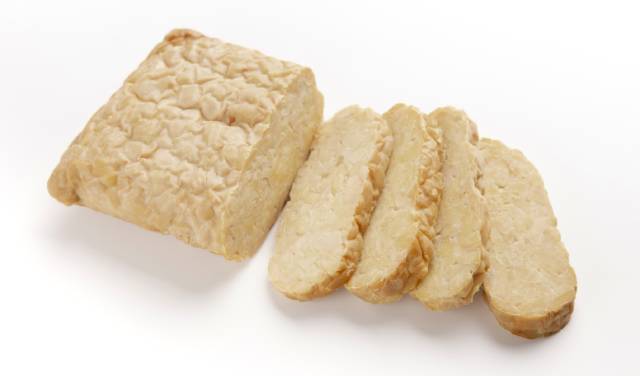 Tempeh is another fermented soy product that comes from Indonesia.

Unlike most soy products, this popular Indonesian dish has a firm and chewy texture.

The production of tempeh involves boiling soybeans, arranging them in a tray, and then fermenting them with the fungus Rhizopus oligosporus, also known as “tempeh starter” (37).

During fermentation at room temperature, an edible white mold called mycelium develops on the beans and encases them. After fermentation is over, tempeh looks like a solid soybean cake, as shown in the above image.

Tempeh is a versatile ingredient, and it is commonly used as a meat substitute, as well as in soups and stews. It can also be eaten alone, and it is usually baked or fried.

See this complete guide to tempeh for more information.

Key Point: Tempeh is a chewy and nutritious form of fermented soy.

As shown in this article, there are numerous different fermented soy products.

Some of these are mainly used for their taste-enhancing properties, while others are nutritious foods.

Among these fermented soy foods, some have unique benefits as a result of their vitamin K2 content.

It should be possible to find the more popular of these products (such as soy sauce, miso, and gochujang) in any store.

For the other products, they should all be available for a reasonable price in a local Asian supermarket.

To see more nutritious food ideas, see this list of beans and legumes.

What Is Natto? The Benefits of Japan’s Fermented Dish