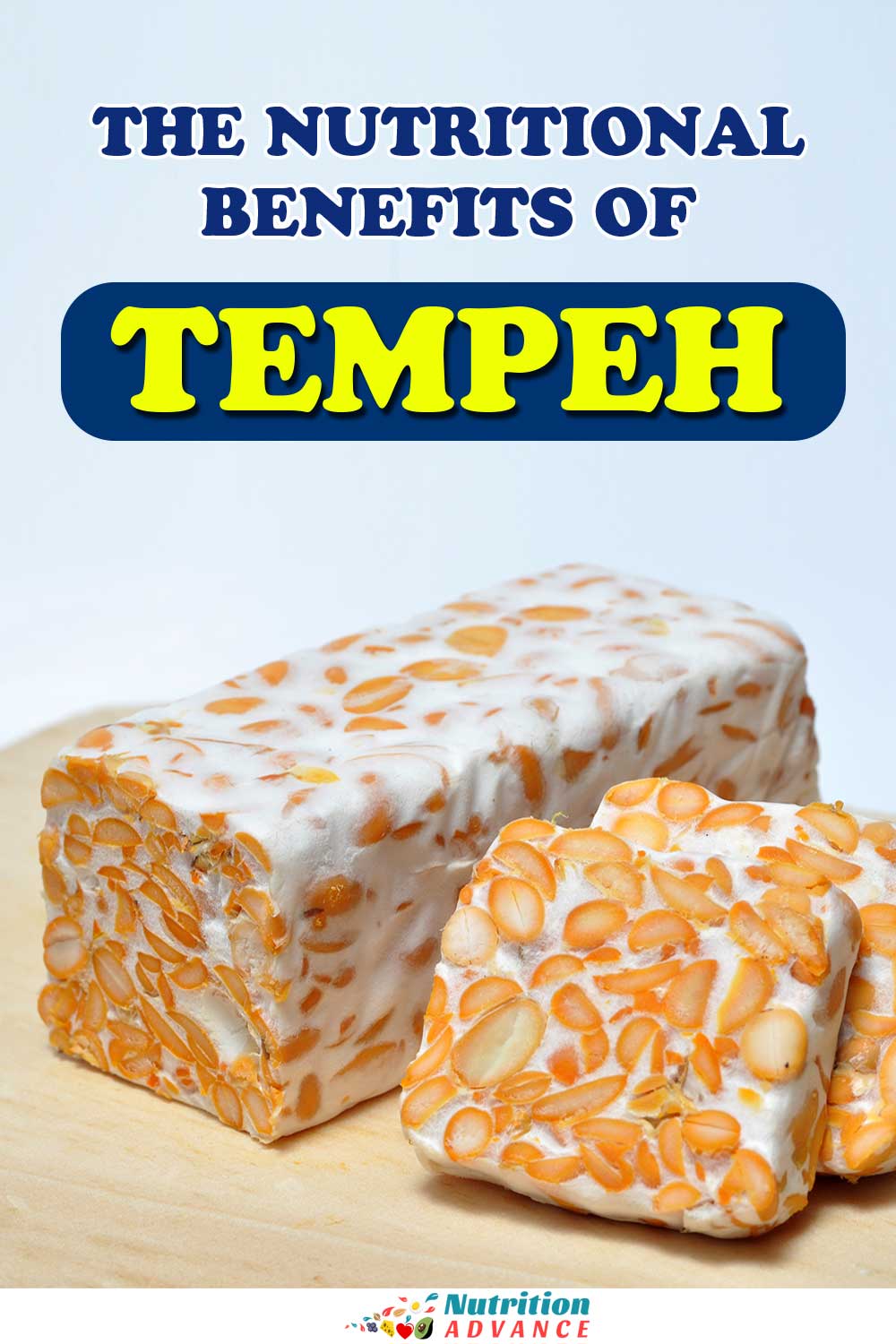 Tempeh is an Indonesian food made from fermented soybeans.

This popular food is served in slices similar to tofu. While bearing a resemblance to tofu in this way, tempeh is a fermented food with a much more flavorful taste.

Besides the taste, tempeh is also full of beneficial nutrients, and scientific research hints at various potential benefits.

This article takes an in-depth look at the nutritional benefits of tempeh. 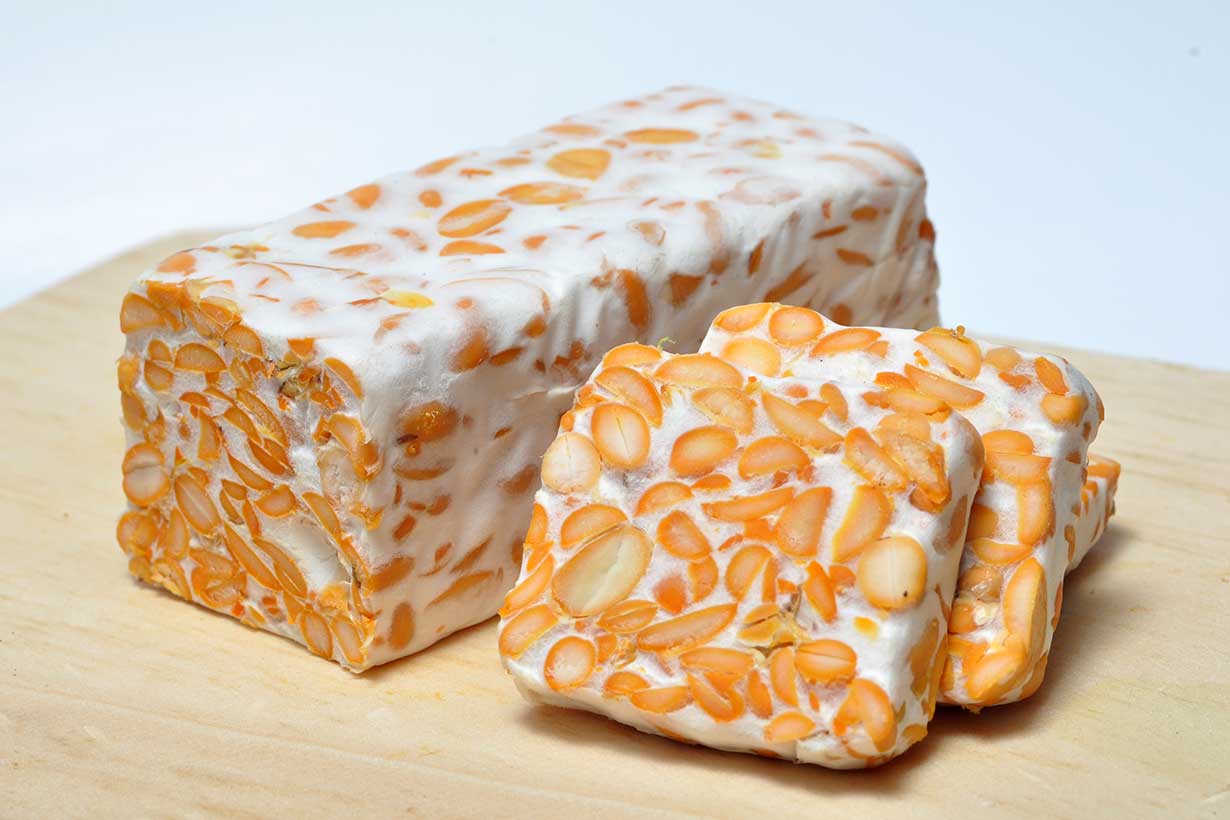 Tempeh is thought to have originated in Indonesia centuries ago, and it has an appearance, as shown in the above image.

Although no exact estimate of origin, Japanese visitors to Indonesia first wrote about the food in the 1800s (1).

Tempeh takes the form of a solid soybean ‘cake,’ it has a firm and hard texture, and it can be broken into pieces by hand.

The annual intake of tempeh in Indonesia is seven kilograms, or approximately 19 grams per day (2).

As with many popular international foods, it has become common to find tempeh worldwide in recent years.

To make tempeh, producers first soak soybeans in water and later boil them until the beans soften. After draining the water, they add a starter culture to the beans and mix it in.

This starter culture can be one of several different variants, but the most commonly used are Rhizopus oligosporus and Rhizopus oryzae. These bacterias are known as fungal cultures, and they initiate the fermentation process of the soybeans (3).

After approximately one day, a white fungal mold called mycelium will start to grow between the beans. As mycelium growth continues, it will bind the beans together in one solid ‘cake’ form over the following 24 hours.

Once the tempeh is solid, it can be refrigerated.

For safety purposes, most commercial tempeh is also pasteurized before being distributed for sale. Tempeh should always be pasteurized or cooked before consumption to avoid rare (but potential) food poisoning issues.

Tempeh is relatively rare among fermented foods in that it does not contain salt.

How Does It Taste?

As previously mentioned, tempeh has a much deeper taste than tofu, and it is like a whole different food.

Tempeh is nutty, earthy, and full-flavored. Sometimes tempeh is deep-fried, which gives it a crispy exterior.

However, tempeh is rarely served plain and is often marinated with soy sauce and other condiments. This gives it salty and slightly meaty characteristics.

Compared to milder fermented soy foods like miso and tofu, the flavor is quite powerful.

Key Point: Tempeh is a traditional fermented food from Indonesia, and it has a strong and flavorful taste.

Tempeh may offer various nutritional benefits, partly based on its nutrient profile and partly due to the fermentation process.

Here is an overview of some of these potential benefits.

Tempeh Is a Rich Source of Protein

With over twenty grams of protein per 100-gram serving, tempeh is among the highest-protein plant-based foods (5).

Also, as a soy-based food, unlike other plant-based sources of protein, tempeh provides all nine essential amino acids (6).

Interestingly, research also shows that the fermentation process to make temper increases the presence of free amino acids. As a result, the protein in tempeh is likely more bioavailable than in unfermented soy foods (7, 8).

While tempeh is a good protein source for anyone, these factors make it an excellent option for people following vegan/plant-based diets.

Key Point: Tempeh is more than 20% protein by weight, and the protein it contains is more bioavailable than most plant-based protein sources.

Bacteria can be rather harmful, or in some cases, it might be beneficial – such as the probiotics in yogurt and fermented dairy. Tempeh is another fermented food that contains a large population of these so-called “beneficial bacteria” strains.

On this note, numerous studies show that tempeh appears to increase the number of Bifidobacterium and Lactobacillus (9, 10, 11).

These two bacterial strains have been associated with health benefits and better digestive health. Although the exact mechanism for these potential benefits is poorly understood, it is thought that they exert their effect through metabolic activities within the host (human gut) (12).

A Good, Bioavailable Source of Calcium

Calcium insufficiency is relatively common in the United States. For this reason, calcium is recognized as one of the four ‘nutrients of concern’ for underconsumption by the Dietary Guidelines For Americans (13).

Calcium intake is also below recommended levels globally. In this regard, a recent systematic review demonstrated that the average daily calcium intake is below 400 mg in much of Asia, Africa, and South America (14).

In contrast, the recommended daily calcium intake is 1300 mg per day (15).

It can be difficult to consume enough calcium, particularly for individuals who do not consume dairy.

Furthermore, the amount of calcium that we can absorb from tempeh seems to be equivalent to milk.

In a randomized controlled trial that measured calcium status using the dual stable isotope technique, there were no significant differences between the bioavailability of absorbed calcium from tempeh and milk (16).

For example, a controlled trial recently investigated the effect of tempeh gembus in female participants with high cholesterol levels (17).

Tempeh gembus is one of several traditional tempeh varieties and is made from soy pulp rather than whole soybeans.

The fiber content of tempeh (which is particularly high in tempeh gembus) may be one explanation for this.

However, another interesting human trial demonstrated that soy combined with a probiotic significantly reduced LDL levels compared to either alone, thus suggesting the tempeh fermentation process might play a role (18).

Similar effects have also been seen with other fermented soy foods such as cheonggukjang (fermented soybean curd) and Japanese natto.

Lowering LDL cholesterol is consistently associated with a lower risk of cardiovascular disease (19, 20).

Tempeh may also feasibly have some other potential benefits, but the strength of available evidence for these is low. Some of these are below for information purposes (but take them with a pinch of salt).

An experimental study in patients with mild cognitive impairment suggests that daily tempeh intake may offer cognitive health benefits. The group that consumed tempeh each day had slightly increased cognitive scores after six months in the study. However, the study was non-randomized, and there is little available research from human trials in this area (21).

Additionally, mice model studies also show that tempeh consumption may have liver-protective properties against alcohol-induced harm. However, it is always unreliable to apply findings from animal studies directly to humans, and large amounts of further research are required in this area before claims can be made (22).

Key Point: Tempeh may have several other potential benefits, but the available evidence is of insufficient strength to make strong claims.

Tempeh Has An Excellent Nutritional Profile

As discussed thus far, tempeh is a significant source of protein, calcium, and fiber.

That said, it contains a wide range of essential nutrients and some potentially beneficial non-nutritive compounds.

Here are the full nutritional values per 3.5 oz (100-gram) serving. The data source is the USDA’s FoodData Central database (5).

Here are the vitamin and mineral contents of tempeh per 3.5 oz (100-gram) serving. The daily values have been calculated using USDA nutritional values and the FDA’s recommended daily values (5, 15).

Tempeh also contains a range of phytonutrients belonging to the polyphenol class of compounds.

Among these polyphenols, tempeh is a rich source of isoflavones (23).

According to systematic reviews and meta-analyses of trials, isoflavones from soy foods may:

Key Point: Tempeh has a varied nutritional profile and offers protein, fiber, polyphenols, and a wide range of vitamins and minerals.

Are There Any Concerns About Tempeh Consumption?

Despite tempeh offering varied nutritional benefits, it may not be a good choice for all individuals.

In the United States, research shows that approximately 0.5-0.7% of the population suffers from an allergy to soy (29).

For this reason, tempeh is unsuitable for individuals who experience reactions to soy-based foods.

Although rare, it is possible to get sick from food poisoning if tempeh is not appropriately prepared and stored.

In 2012, a public health incident was caused by the handling of unpasteurized tempeh in North Carolina, USA (30).

This incident, in which unpasteurized tempeh had a bacterial infection, led to eighty-nine confirmed gastroenteritis cases. Gastroenteritis is inflammation of the intestinal lining caused by a virus or bacteria, and it can cause anything from mild to severe symptoms (31).

Most commercially sold tempeh will be pasteurized before sale. However, any unpasteurized source of tempeh should always be handled carefully and thoroughly cooked before consumption.

How To Use Tempeh

Tempeh can be used in many different ways, and there are numerous versatile recipes available online.

For some ideas, here are some simple ways to use it:

For some more options, here are some delicious ideas.

This Indonesian fermented food is a great source of protein, fiber, vitamins, minerals, and polyphenols.

Since tempeh also tastes great, it’s a worthy addition to an average diet – or at least worth trying.

What Is Natto? The Benefits of Japan’s Fermented Dish

What Is Cheonggukjang? Nutrition + How To Use