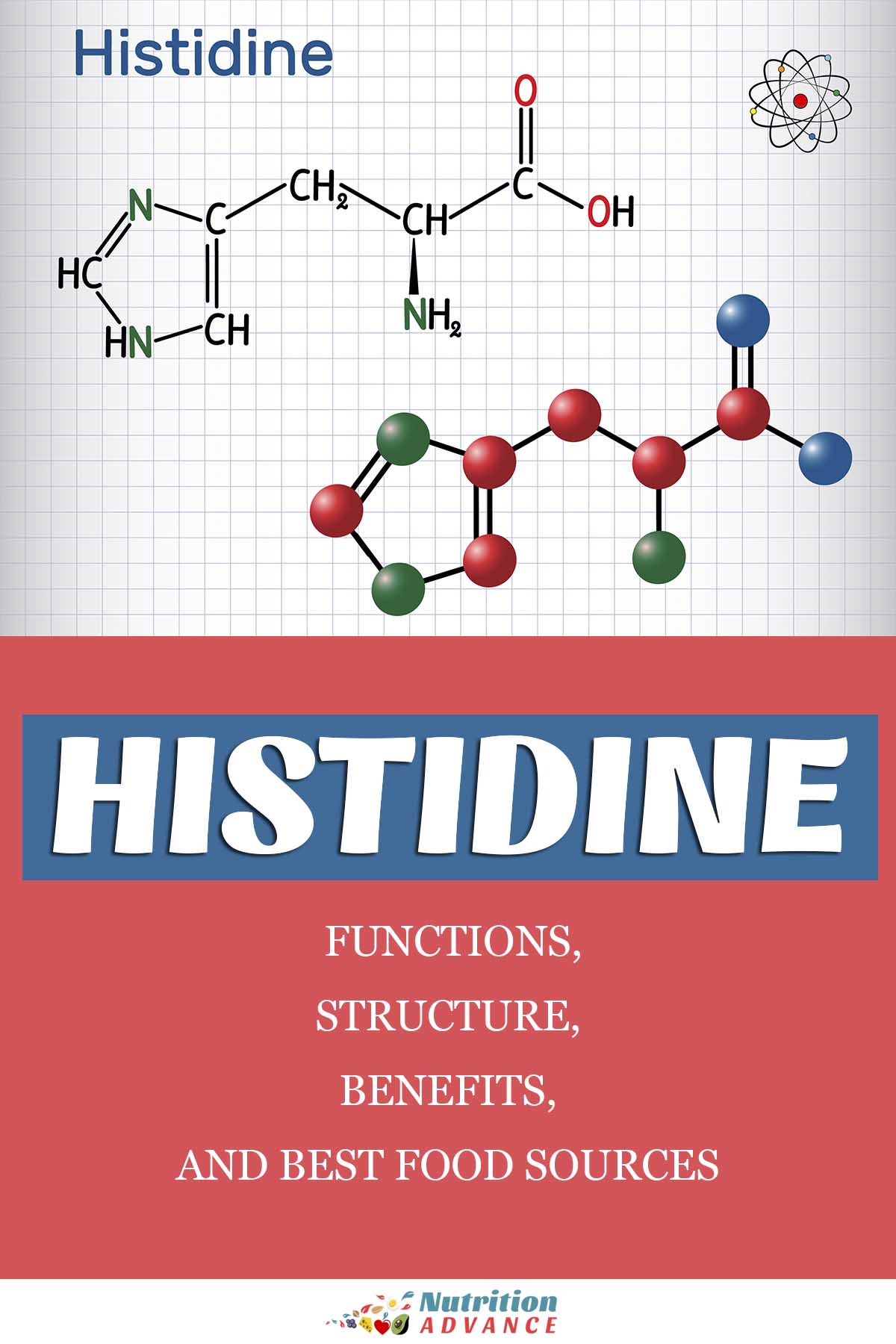 Histidine is one of the nine essential amino acids that humans need to acquire from their diet.

This important amino acid has many vital functions within the body, and it plays a crucial role in the immune system.

In this article, we take a look at what histidine is, the dietary intake requirements, and the functions, benefits, and best food sources.

Histidine is an amino acid that plays an essential role in the growth and repair of the body’s cells (1).

The human body cannot synthesize histidine. This means that we need to obtain sufficient amounts from dietary sources to meet our requirements.

Interestingly, histidine was once considered to be a ‘semi-essential amino acid.’ It is not uncommon to still see this outdated definition.

This ‘semi-essential’ terminology was because researchers felt that histidine was essential for infants, but not for adults.

However, further research on histidine demonstrated that this amino acid is just as important for adults (3, 4).

The IUPAC (chemical) name for the amino acid is ‘histidine‘, and the systematic name is ‘2-Amino-3-(1H-imidazol-4-yl)propanoic acid‘.

The chemical formula of histidine is ‘C6H9N3O2′.

In the below image, you can see the chemical formula and the amino acid’s molecular structure; 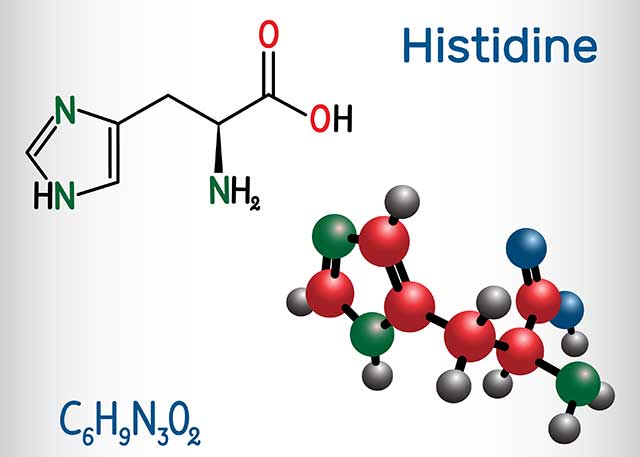 The recommended histidine requirements vary depending upon body weight.

For adults over the age of 19, the recommended daily intake of histidine is 14 mg per kilogram of body weight (5, 6).

In the following table, based on this daily intake recommendation, you can see the approximate histidine requirements for various body weights;

Key Point: For adults, the daily histidine requirement is 14 mg per kilogram of body weight.

Since it is an essential amino acid, histidine has a variety of critical functions within the human body.

Histidine is a precursor for the synthesis of a compound called histamine. In other words, histamine is produced from histidine in the body (7).

Among its numerous functions, histamine plays an important role in;

Key Point: Histidine is a precursor for histamine, a compound which plays an important role in immune response.

For instance, one recent randomized controlled trial found that increased histidine intake improved attentiveness and focus. Additionally, the histidine group had a better mood state and decreased feelings of fatigue compared to the placebo group (14).

In a further study featuring seventeen participants, histidine depletion had a negative impact on response to time-based tasks (15).

Key Point: Histidine levels may be important for mood and cognitive performance.

May Have Anti-Inflammatory Effects

Recent research has demonstrated that some amino acids, including histidine, may have anti-inflammatory properties.

In one study, histidine had an inhibitory effect on the activation of nuclear factor-kappa B (16).

Nuclear factor-kappa B is a type of protein that regulates DNA and cytokine (a protein released by immune cells) production.

Studies suggest that overexpression of nuclear factor-kappa B may be involved in atherosclerosis, which is the development of plaque in coronary arteries (17, 18).

Furthermore, low levels of histidine are associated with inflammation and oxidative stress.

Has a Protective Role In Uremia and Chronic Kidney Disease

Research indicates that histidine has protective properties for kidney health.

For instance, a study investigating histidine deficiency in 325 patients with chronic kidney disease found that (21);

Uremia is a condition that can occur when kidney damage prevents the kidneys from doing their job correctly. When the kidneys cannot filter and eliminate waste products from the blood, urea and other compounds can build up (22).

However, some studies show that histidine supplementation can lower blood levels of urea and attenuate symptoms of uremia (23, 24, 25).

Key Point: Histidine has a protective effect against uremia and chronic kidney disease.

As an essential amino acid, the body requires histidine for the growth and repair of tissues.

Histidine is crucial for its role in protecting the myelin sheath (26).

The myelin sheath is a layer—or outer coating—made of fat and protein that surrounds and protect nerve cells. Here it shields them from damage and helps to transmit electrical impulses quickly (27).

Important For the Absorption of Zinc

When we consume any mineral, we do not fully absorb the total amount that we eat, and a range of factors can promote or inhibit mineral absorption (28, 29).

In this regard, histidine appears to have a positive impact on the absorption of the mineral zinc.

Histidine, alongside other amino acids such as methionine, helps to promote zinc absorption. For this reason, we can often find histidine as an ingredient in zinc supplements (30, 31, 32).

Carnosine is a dipeptide molecule, which is a compound formed by the bonding of two amino acids. In the case of carnosine, the compound is made from the amino acids alanine and histidine (34).

According to a systematic review and meta-analysis of randomized controlled trials, carnosine may have several benefits (35);

Key Point: Histidine (along with alanine) is a precursor for the synthesis of carnosine.

Generally speaking, the best way to get histidine is through eating protein-rich foods like meat, dairy, eggs, and seafood.

However, the table below shows the foods which are most concentrated in histidine per 100 grams (36);

Key Point: Meat and hard cheese tends to be the best gram-for-gram source of histidine.

Like all essential amino acids, histidine plays an important role in a wide range of metabolic processes.

Fortunately, providing we consume sufficient protein, we don’t need to overthink whether or not we are consuming enough.

However, the research does show that histidine supplementation could potentially have benefits in certain circumstances.

For those interested in histidine (or carnosine) supplementation, some useful further reading can be found below;

For more on amino acids, see this guide to leucine.