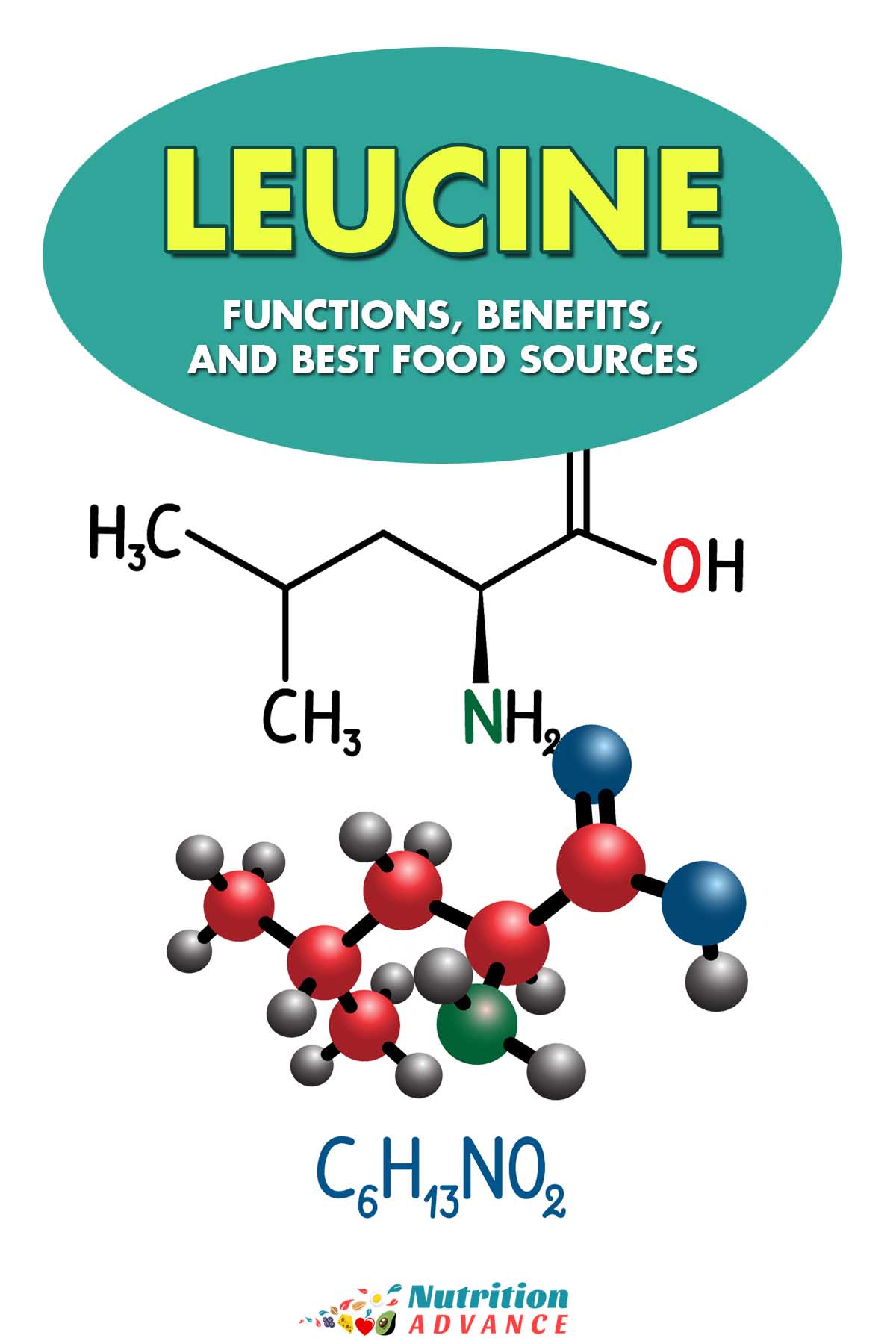 Leucine is an amino acid that the human body cannot synthesize.

There are nine indispensable amino acids in total, but each individual amino acid has its own unique properties.

This article provides a guide to the benefits of leucine, how much we require, and the best dietary sources from where we can obtain it. 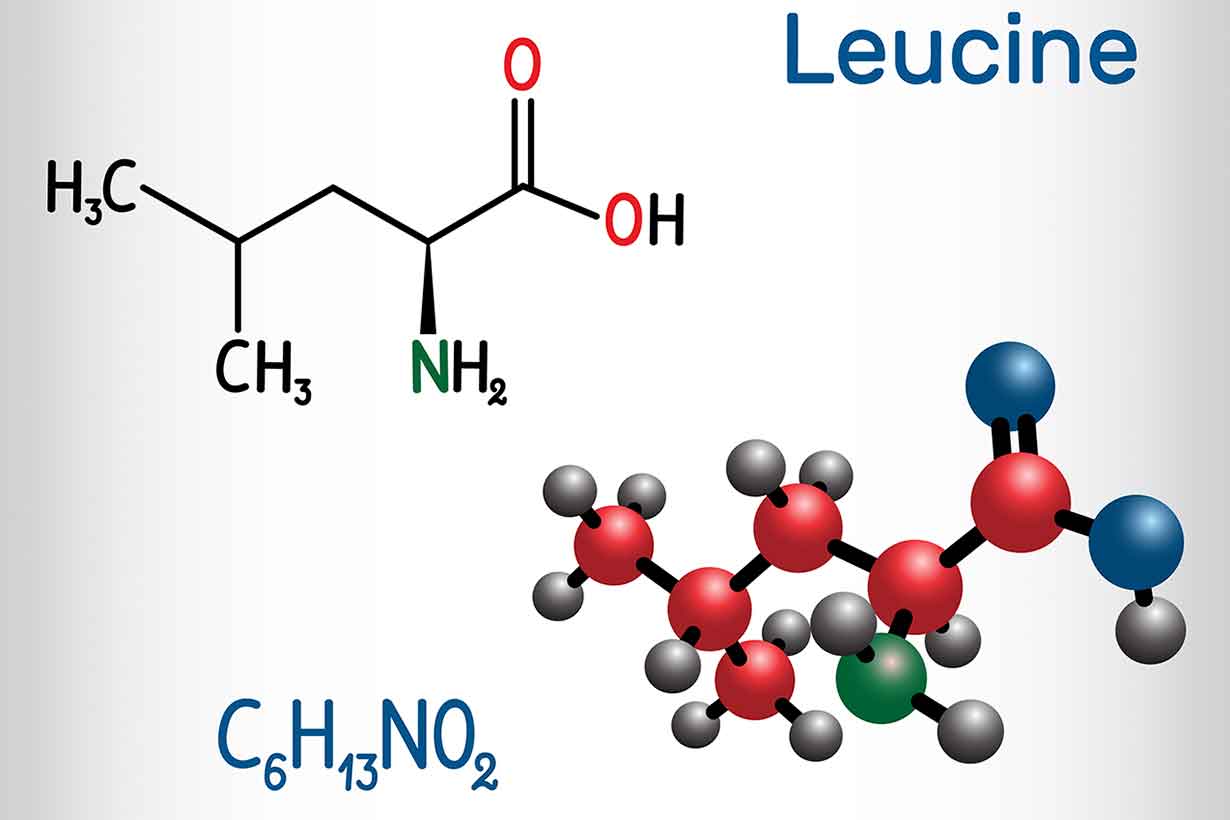 Leucine is an amino acid that we need to obtain from our diet, and for this reason, it is known as an ‘essential amino acid.’

The molecular structure and chemical formula for leucine are visible in the above image.

Leucine is one of the three branched-chain amino acids (BCAA) alongside isoleucine and valine. It is also one of the two ketogenic amino acids in the human body, with lysine being the other (1, 2).

Ketogenic amino acids are amino acids that degrade into a compound called acetyl-CoA, which is a precursor to the production of ketone bodies (3).

We will examine the full functions (and potential benefits) of leucine later in this article.

Key Point: Leucine is an essential amino acid and it plays a primary role in protein metabolism.

Recommended dietary allowances have been set for leucine by the Food and Nutrition Board at the National Academies of Sciences, Engineering, and Medicine.

For adults over the age of 18, requirement intakes are set at 42 mg per kilogram of body weight per day (5).

To make this figure easier to understand, the following table shows the calculated recommended leucine intake by body weight.

All essential amino acids play vital roles within the human body, but leucine may also have some unique benefits of its own.

Firstly, research has demonstrated that leucine acts as a signal to stimulate muscle protein synthesis (6).

In other words, leucine signals that there there are amino acids present and encourages muscle building pathways, partly through the activation of mTOR (7).

To be specific, there was a statistically significant increase in the muscle protein fractional synthetic rate in participants supplementing with leucine compared to a control group (10).

May Help To Preserve Lean Muscle Mass When Dieting

Dieting can be a double-edged sword in that it is possible to lose body fat (which we want) and actual muscle (which we don’t want) at the same time.

For this reason, optimal weight loss methods should emphasize the preservation of lean muscle mass (12).

On this note, some research demonstrates that an increased dietary intake of leucine may help to preserve muscle mass better. For example, a double-blind, randomized controlled trial examined the benefits leucine may have when used in combination with a weight loss program (13).

This study looked at 80 older adults with obesity. Participants in the intervention group received one daily whey protein and leucine drink with a high leucine content.

In contrast, the control group did not consume this extra protein, consumed fewer calories than the intervention group (1662 kcal versus 1823 kcal), and had a “normal” protein diet (0.8 g protein per kilogram of body weight, to match the Recommended Dietary Allowance).

Interestingly, despite the intervention group having a higher calorie and protein intake, the trial results showed that:

There are also further studies showing that leucine can help to preserve muscle mass on hypocaloric (low calorie) diets (14).

Key Point: Leucine may enhance the body’s ability to preserve lean muscle during a period of dieting.

A variety of studies have analyzed the potential benefits of leucine for muscle strength in older adults (15, 16).

In a randomized, double-blind, controlled trial, thirty older adults were either asked to consume 10 grams of leucine per day or a placebo over a 12-week study.

After 12 weeks, the leucine group exhibited significant gains in leg strength compared to the control group. However, aside from leg strength, no statistically significant differences were identified for any of the study’s other outcomes (17).

In this trial, the drink containing 4.2 grams of leucine led to higher rates of muscle protein synthesis, prompting the researchers to assert that higher leucine intake may help to reverse the loss of muscle mass in older adults (18).

On the other hand, an older randomized controlled trial gave 7.5 g of leucine or a placebo three times per day to thirty male adults with a mean age of 71. This study found no significant results, and the researchers concluded that leucine supplementation “does not represent an effective nutritional strategy to increase muscle mass or strength” (19).

Key Point: Leucine may potentially have an effect on muscle strength, but the (weak) evidence for this is mixed.

May Help With Stroke Recovery

Since leucine plays an important part in muscle protein synthesis, it is thought to have potential benefits in stroke rehabilitation.

In this regard, Japanese scientists recently conducted a randomized controlled trial to test how leucine supplementation affected stroke recovery. The target group in the study was patients recovering from stroke with sarcopenia (loss of muscle mass and strength).

In the study, the intervention group was given leucine supplements over eight weeks, while the control group was not.

The results of this study showed that the leucine intervention group had statistically significant increases in handgrip strength and skeletal muscle mass. They also achieved a higher functional independent score than the control group (20).

Fortunately, it is possible to get adequate amounts of dietary leucine simply by consuming enough protein-rich foods.

However, the table below shows the very best food sources of leucine per 100-gram serving (21):

Each of these sources contributes good amounts of leucine, but it is worth noting that amino acids from animal-based foods have better digestibility.

While it is rare for leucine from dietary sources to cause problems, it may be involved in certain health conditions, and it is possible to consume excessive amounts.

Excessive intake of leucine may potentially play a role in the development of pellagra, a disease caused by niacin (vitamin B3) deficiency.

The reason for this is because the amino acid tryptophan is a precursor to niacin. Research has shown that excessive amounts of leucine impair this tryptophan-niacin metabolism pathway (22).

Pellagra is very rare today, but it was the most prevalent deficiency disease in the United States in the 19th and early 20th century (23).

Leucine toxicity is also known as ‘maple syrup urine disease.’ This name comes from a sweet odor that is present in the urine of those who have the condition (23).

Maple syrup urine disease is characterized by the body’s inability to break down the amino acids leucine, isoleucine, and valine. However, the condition is very rare, and it is mainly an inherited condition that presents in infants. That said, late-onset cases can sometimes develop (24).

Anyone with a suspected medical condition should discuss it with their primary physician.

Although an official upper limit has not yet been set and research is ongoing, there have been several studies in this area:

Leucine is an essential amino acid that plays a critical part in muscle protein synthesis.

Beyond this, there are suggestions that it may also have unique benefits for muscle strength and preserving muscle mass.

However, research in these areas is ongoing, and future studies should provide more clear evidence on leucine’s benefits.

For more on essential amino acids, see this overview of histidine.