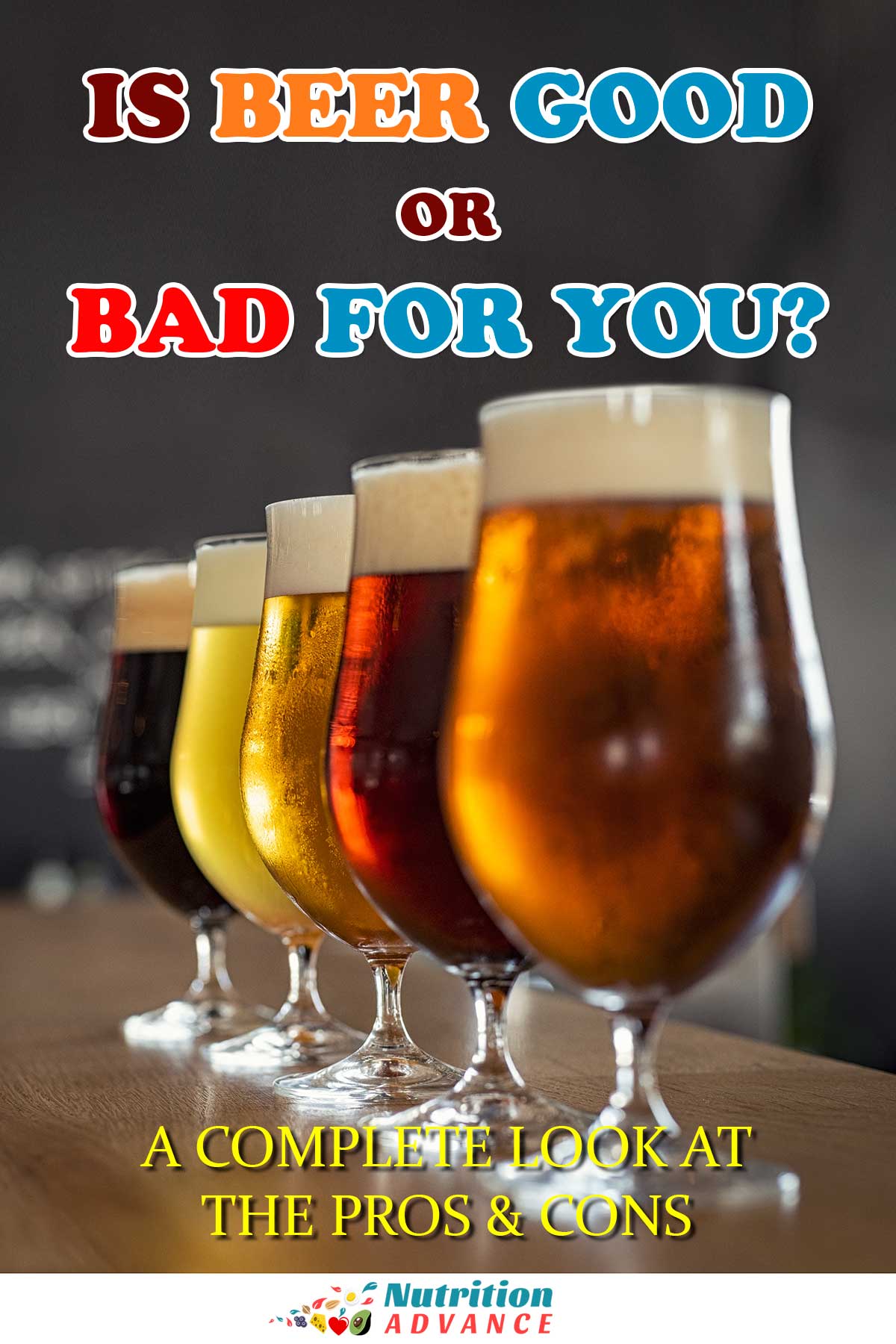 Beer is said to be the third most popular drink in the world, and it is one of humankind’s oldest recorded recipes.

However, the drink is widely regarded as being an unhealthy choice.

Interestingly, while beer should never be classed as a health drink, some studies suggest it may have benefits as well as drawbacks.

This article takes a look at what the current research says about beer. As part of this, we’ll examine the nutrition profile, concerns, and purported benefits. 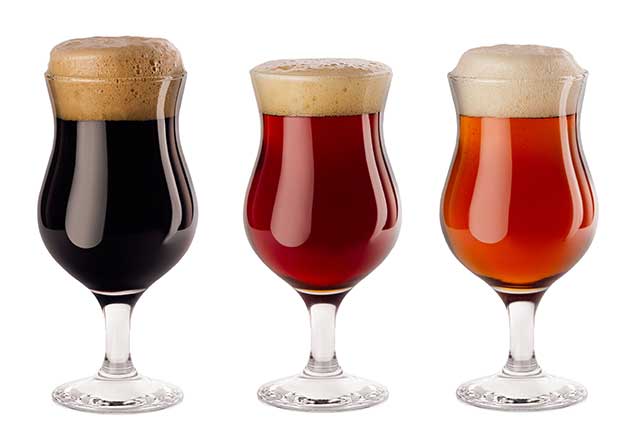 It is worth noting that every variety of beer will have a slightly different nutrition profile, depending on the ingredients and brewing method.

However, for a general idea, you can see the nutritional values in the tables below.

Key Point: As shown in the nutritional values, beer is a moderate source of carbohydrate. It also contains small amounts of B vitamins and several minerals. 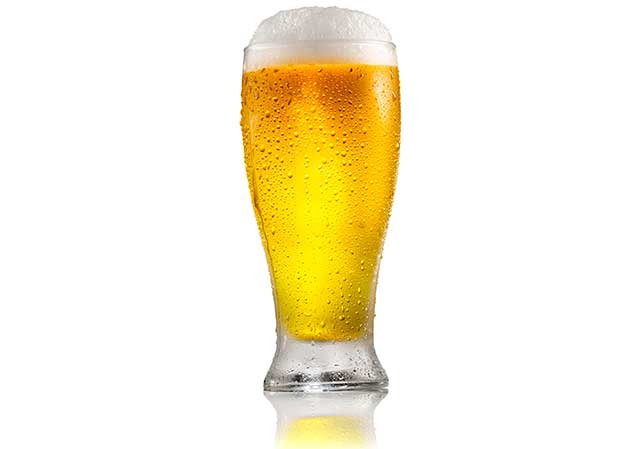 Before we look at some potential benefits of beer, there are several widely known (and lesser known) concerns to cover.

1) Alcohol Is a Toxin

Starting with the obvious concern; alcohol is a toxin.

Unless you are drinking a non-alcoholic version, all beer contains ethanol (2).

Although it is legal and not commonly seen as such, ethanol (alcohol) is a type of drug that acts as a central depressant.

While the dose makes the poison, alcohol can be particularly harmful to the liver due to the chemical reaction that occurs when our body breaks it down.

During this process, alcohol transforms into a compound called acetaldehyde, which is a known toxin and probable carcinogen (3, 4).

Regular (and especially excessive, chronic) drinking can lead to cumulative inflammatory damage to the liver and other parts of the body where alcohol is metabolized (such as the small intestine and pancreas).

Acetaldehyde and free radicals produced during the metabolism of alcohol can also cause DNA damage (5).

Key Point: Beer contains ethanol, and its metabolism creates products that can cause damage to the body – especially in excessive doses.

2) Beer Is Very High In Carbohydrate and Calories

In absolute terms, beer is not one of the highest carbohydrate sources, and it only provides around four grams per 100 ml.

However, many beer drinkers don’t stop at one drink, and some types of flavored craft beer can contain anywhere from 20 to 30 grams of carbohydrate per serving.

In other words; the carbs in beer can quickly add up.

On this note, beer is also a high-glycemic drink, and a recent study calculated that Pilsner beer has a glycemic index of 89 (6).

Studies also show that beer consistently spikes blood glucose and insulin levels, and this is particularly the case for people with type 2 diabetes (7, 8, 9).

For those who wish to limit their carbohydrate intake, it is possible to find a range of low carb beer options.

Beer’s carbohydrate content is not the only issue concerning weight maintenance issues.

When we drink alcohol, our metabolism is essentially put on hold because the liver breaks down alcohol as a priority over all other nutrients.

To put it another way; alcohol consumption will suppress the oxidation of carbohydrate, fat, and protein (10).

Key Point: Beer can contain large amounts of carbohydrate, and it inhibits the oxidation of food we eat.

Epidemiological studies suggest that some types of alcohol, including beer, may raise the risk for gastric cancer.

In a systematic review of 76 studies featuring over 6,316,385 participants, there was an association between beer drinking and gastric cancer.

A dose-response analysis of the results suggested that there was a 5% increased risk of gastric cancer per 10-grams of daily alcohol from beer (11).

However, as with all epidemiology, this is only an association, and it does not prove causation.

Furthermore, some studies—including a large-scale Japanese systematic review—find no association between beer drinking and gastric cancer (12, 13).

Key Point: Beer may increase the risk of gastric cancer, but the research for this is mixed.

4) Beer Can Lower Inhibitions and Increase the Risk For Accidents

As with all alcohol, drinking excessive amounts of beer can lower inhibitions and affect decision-making skills.

Sadly, there are around 2000 deaths per year in the United States alone from alcohol-related accidents.

Additionally, nearly 800,000 assaults are thought to be alcohol-related (14).

Key Point: Excessive beer drinking can lower inhibitions and lead to poor judgement, which can increase the risk of accidents/crime. 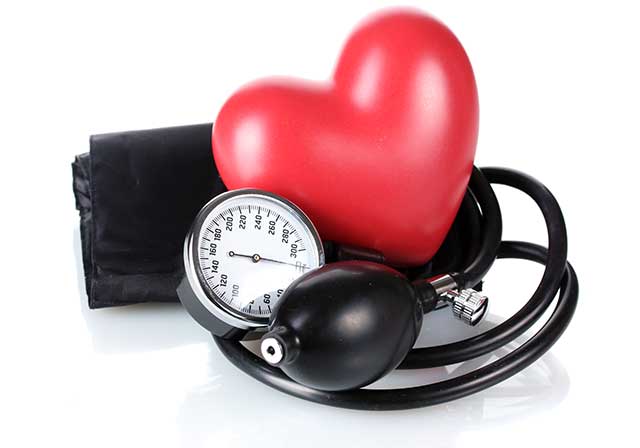 Drinking beer appears to raise blood pressure levels, although this may be in moderate to high drinkers.

Recent studies on this topic have shown that;

6) Heavy Drinking Can Cause Liver Damage

Since alcohol is a toxin, heavy drinking of any alcoholic drink—including beer—can cause liver damage.

Alcohol-related liver disease (ARLD) is a serious problem, and it can eventually progress to alcoholic hepatitis and cirrhosis

Worryingly, it was the 25-34 age group that experienced the greatest increase in mortality (18).

Also, the liver is not the only part of the body that heavy drinking can effect. Excessive alcohol intake can also negatively affect the cardiovascular system and lower immune response (19, 20).

Key Point: Drinking excessive amounts of beer can cause a range of serious adverse health effects. 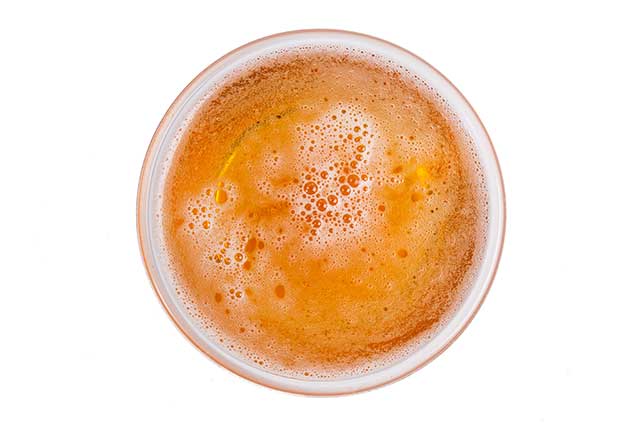 Now that we have looked at the negative points about beer, there are also a few potential benefits it can have.

Beer can exert this effect through its alcohol content and bitter compounds called isohumulones (22, 23).

Therefore, some researchers believe that low to moderate amounts of beer could offer heart-protective properties by enhancing cholesterol efflux (24).

Key Point: Small amounts of beer (and alcohol in general) can increase plasma levels of HDL, which may have cardiovascular benefits.

It is easy to come across information about the polyphenolic content of red wine. However, we don’t generally hear anything about beer in this regard.

That said, beer is also a rich source of bioactive polyphenols such as phenolic acids, flavanols, flavonols, and flavanones (25, 26).

There is not a substantial amount of research in this area, but one randomized trial featuring 33 male volunteers suggested that the polyphenols in beer can improve certain markers of atherosclerosis.

Key Point: Beer contains polyphenols which may improve some markers of cardiovascular risk. However, there is little research in this area.

3) Good Source of B Vitamins

Beer is a reasonable source of B vitamins, and it supplies 9% and 8% of the RDI for vitamin B3 and vitamin B6 respectively per serving (1).

However, there are much better food sources of these vitamins, and the (relatively small) nutrient content is not a good reason to drink beer.

Key Point: Beer contains low to moderate amounts of several B vitamins, particularly B3 and B6.

In recent years, there has been a lot of noise about the potential benefits of prebiotics for gut health (28, 29).

While much of this research is in its infancy, it is possible that a healthy gut microbiome may influence our overall health.

On this note, research shows that nondigestible compounds in beer called oligosaccharides function as prebiotic products.

Further research is necessary, but the researchers believe that these compounds may support the growth of beneficial gut bacteria (32).

Key Point: Beer contains prebiotics which may help to improve the gut microbiome.

However, once again, it is worth noting that epidemiology only identifies associations and cannot be taken to imply causation,

That said, reviews of epidemiological research suggest a ‘J-shaped relationship’ between beer and cardiovascular risk and all-cause mortality (33, 34).

In other words, small amounts may potentially have benefits.

Key Point: Epidemiology suggests that small amounts of beer could have benefits, but larger intakes are harmful.

Beer is a tasty drink that many people enjoy drinking.

However, it can have harmful effects on our health, particularly when consumed in excess.

Although there are possibly some benefits of small amounts of beer, these likely don’t outweigh the negatives.

To conclude, the words of the UK’s National Health Service are apt;