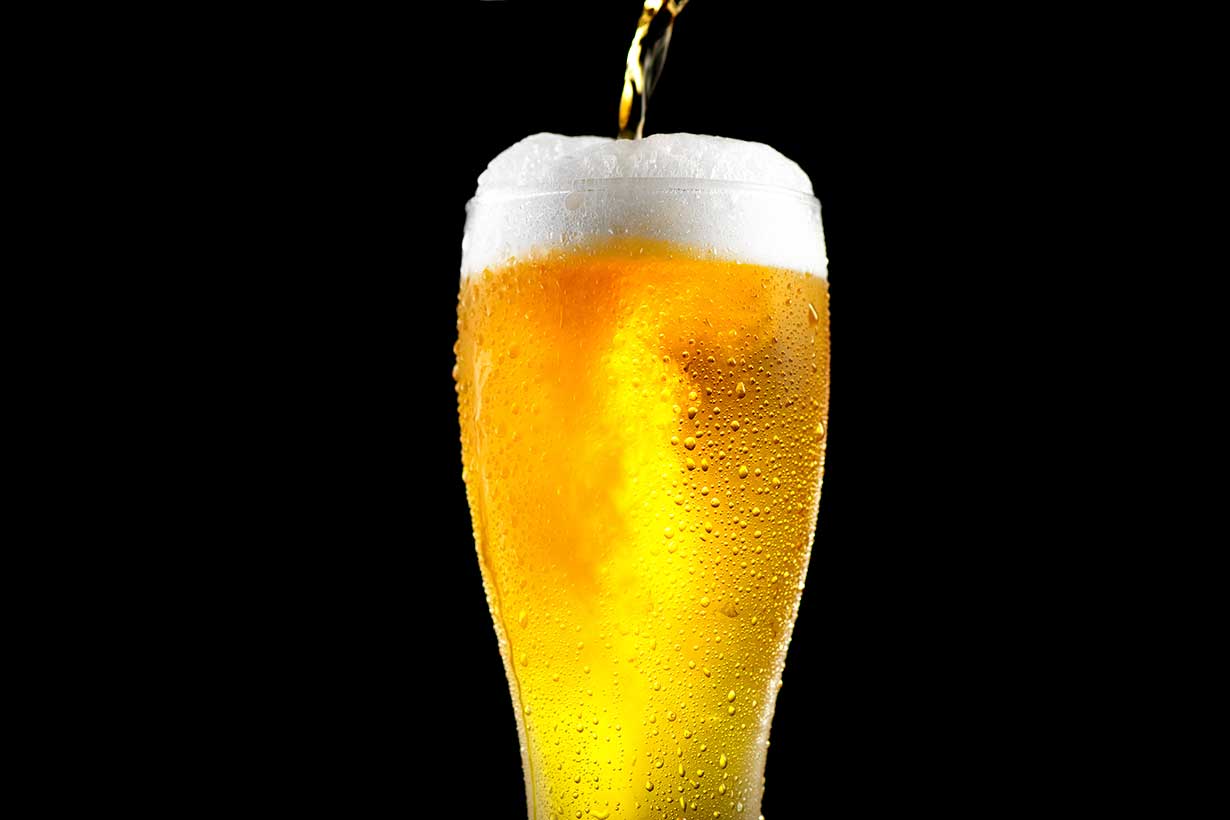 Most would presume that beer is a no-go on low carb diets.

However, there are many low carb alcoholic drinks, and some beers are perfectly fine – in moderation of course!

While we can’t really call these drinks healthy, some people like to have a beer from time to time. Additionally, many people with type 2 diabetes want to find a beer that doesn’t skyrocket their blood sugar levels.

This article provides a list of 17 low carb beers, and all data is based on a 12 fl oz (355ml) serving (unless otherwise stated).

Rating scores (on a 5-star scale) are sourced from the website Beeradvocate. 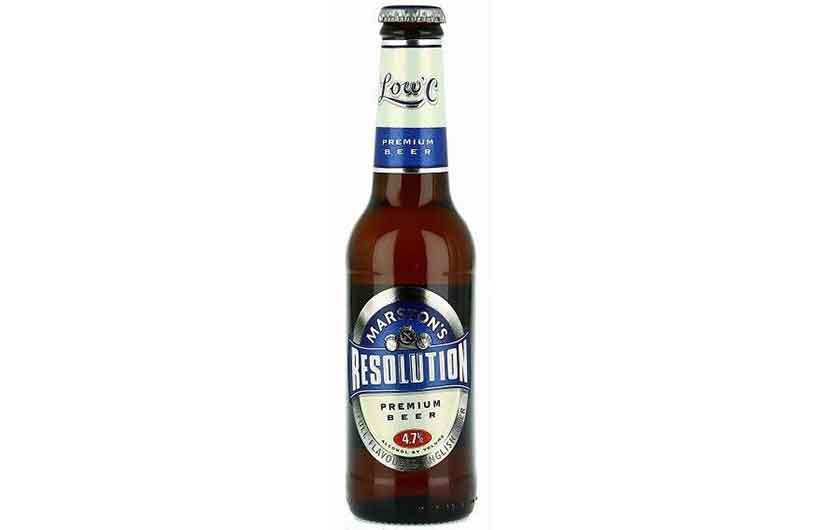 Marston’s Resolution is actively marketed as a “premium ultra-low carb beer,” and it is easiest to find in the UK.

The consensus seems to be that it’s a reasonably good tasting beer with a refreshing flavor.

In fact, it’s close to being a zero carb alcohol, and this is possible through a process known as double fermentation. The brewery uses this method to ensure all the natural sugars convert to alcohol.

At just under 5% alcohol, it’s a pretty standard strength beer. With a ‘2.0’ in the name, Sleeman’s Clear sounds less like a beer and more like a software update.

However, it’s a very low carb beer that originates in Canada. Sleemans is a pale style lager, and it is quite mild at 4% alcohol.

On the negative side, the reviews of this beer are mostly poor to average, with the lack of flavor being a common theme.

You could always try it for yourself though, but those looking for something more flavorful may be disappointed.

Key Point: At 2 grams of carbohydrate per 355 ml bottle, this beer is virtually carb-free. NIXE Extra Dry is a “full-flavored low carb beer” that aims to deliver a flavorful taste despite the lower carbohydrate content.

It’s a type of pilsner, and it has an average alcohol content.

Reviews of this beer seem mixed, with some saying it’s a little watery, while others enjoy the “hints of fruit”.

Overall, it’s one of the best beers to drink on a low carb diet – it just depends whether it suits your taste or not. 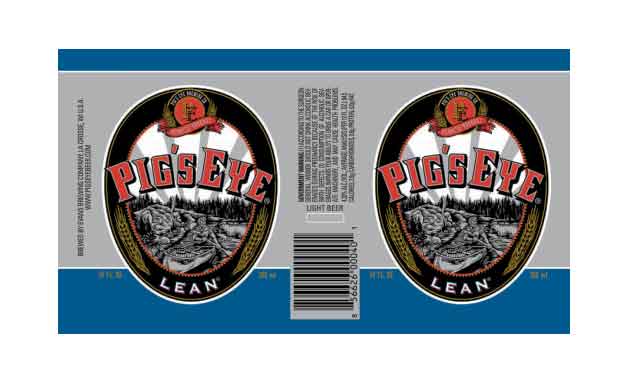 This low carb beer tops the list for originality with its name.

It’s very low in carbohydrate too, despite being mild to medium in strength.

The brewery operates from California in the US, and they claim that the beer offers “less carbs and calories, and more flavor” than other low carb beers.

However, the beer doesn’t score so highly with reviewers and it currently has a 2-star rating. Michelob Ultra has the marketing power of Anheuser-Busch, the largest beer producer in the world, behind it.

Additionally, at only 2.6 grams of carbohydrate, it’s one of the lowest carb beers around.

Michelob is also dubbed as “the original low carb beer”.

Despite this, the beer doesn’t fare well in the ratings department, having an average rating of 1.9 from over 2300 reviews.

The consensus seems to be that the beer is very smooth and light, but lacking in flavor.

Key Point: Michelob Ultra is a low carb lager with a low ABV, but unfortunately a low rating too. 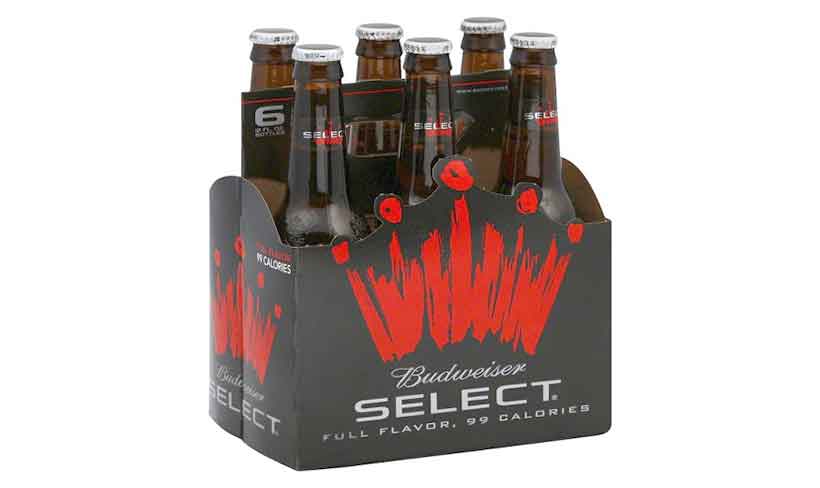 It is also one of the oldest drinks on this low carb beer list; it has been on the market since 2005.

The beer manages to keep the carbohydrate content to around 3 grams, while total calories are less than 100.

Apparently, this drink undergoes a fermentation process that lasts double the time of a regular lager. This longer brewing time is what results in the minimal amount of carbs in the beer.

Like most of the beers so far, Bud Select doesn’t fare too well in the reviews section. The beer has an average rating of 2 stars from over 1200 reviews. Beck’s Premier Light is one of the best low carb beer options for calorie and carbohydrate content.

However, the alcohol percentage is extremely low at 2.3% ABV. It is a very light beer with a pale color, and you can drink a few without worrying about getting drunk.

On the other hand, if you’re looking to “feel something” from your beer, then you may want to look elsewhere.

Overall, Beck’s Premier Light is one of the best-rated beers at the lower carb end of the spectrum.

Key Point: A very low carb beer, and it’s low in calories and alcohol too. Introduced in 1975, Miller lite is one of the oldest light beers.

It is a self-professed pale lager with a big taste. In fact, it followed Frederick Miller’s idea that “a beer could be light but doesn’t have to sacrifice on taste”.

The carb content of this beer is just over 3 grams, making it one of the lowest on the list. Additionally, it has a fairly standard ABV of 4.2%.

Miller claims that the beer also has a more “golden” color than most light beers on the market. Like Michelob Ultra, Natural Light is another light beer from the Anheuser-Busch brewery.

This one is slightly higher in carbohydrate, with a minimally increased ABV.

On the negative side, the review scores for this beer are quite poor. It is said to be extremely light, with a lack of flavor. This beer is the fourth in the list from the world’s biggest brewery, Anheuser-Busch.

3.2 grams of carbs per bottle seems to be a popular target for light beers, and Busch Light sticks to this amount.

However, it doesn’t seem to have helped the flavor; the beer’s average rating is 1.8 stars. Another beer that first came to market in the late 70’s, Coors is a light lager from the large Coors Brewing Company.

With a slightly higher carb content than the previous options, this one has 4.2g per bottle. As low carb alcohol drinks go, this is still very low and represents about 1.4% carbs by volume.

Coors Light also has a greater ABV at 5% volume. Like most light beers, it is very pale (light yellow) in color and it won’t be the most flavorful beer around. Keystone Ultra is marketed as a beer with a “clean, crisp taste with a smooth finish”.

Strangely, Keystone Light shares almost the same specifications as Coors Light. It has the same calorie and carbohydrate content, and the ABV is exactly the same.

Unfortunately, though, the rating is a little lower. Keystone Light only has an average rating of 1.8 stars from over 2000 ratings. Many people claim that continental European beers are the world’s best.

Whether it’s true or not, the Amstel Light is the best-rated low carb beer so far in this list.

Amstel is one of the most popular beers in the world, and it hails from the Netherlands. Corona Light is a beer from the Grupo Modelo brewery in Mexico City, Mexico.

It is another beer that contains 5 grams of carbs, yet it has a higher alcohol content than Amstel Light at 4.1%.

Corona is popular throughout the world. In fact, this ‘light’ version is apparently the #1 light imported beer in the US in terms of sales.

Like with other light beers, it has a golden light color and a mild taste. Heineken is another popular beer from the Netherlands.

It is one of the world’s oldest commercial beer brands too, with Heineken opening their first brewery in 1867.

Heineken Premium Light is the brewery’s alcoholic beverage aiming at those interested in weight loss/diet.

Despite containing only 99 calories, Premium Light has 7 grams of carbohydrate per bottle.

Could the higher carb content make it the best tasting low carb beer so far?

Almost, but not quite; the average rating is 2.3 stars from 995 votes – falling just behind Amstel. Since the first fifteen beers were all lager/pilsener beers, the last two are options for those who prefer ale.

Unfortunately, ales are naturally higher in carbohydrate and many of them are approaching 20 grams per bottle.

However, Greens Tripel Blonde Ale contains a moderately low 9 grams of carbs per bottle, which is still less than 3 g per 100 ml.

It also has the benefit of a 3.0 rating for taste. Newcastle Brown Ale is another of the lowest carb ale options.

This beer is an English brown ale with a slight taste of caramel; it’s a pleasant beer to drink and it has a fairly standard 4.7% ABV.

Furthermore, this beer has the best rating on this list; 3.3 stars from over 5000 ratings.

However, it probably isn’t fair to compare an Ale’s taste to a low carb lager.

Either way, you won’t find ale much lower in carbs than this one.

Which is the Best Low Carb Beer?

The answer to this question depends on whether you’re looking for the best tasting or the absolute lowest carb beer.

For the best-tasting, from the beers on this list, Newcastle Brown Ale scores the highest. Otherwise, the very lowest carb beers are the first five on the list; all contain less than 3 grams per bottle.

You may have noticed that most of the low carb lagers struggle to score more than 2 stars out of 5. The simple reason for this is that ‘light’ and low carb beers don’t offer the same flavor as regular beers do.

Therefore, if you want to enjoy beer occasionally and have no medical reason to restrict carbs, it may be worth just selecting the one you enjoy the most.

Drinking Alcohol On a Low Carb Diet: a Good or Bad Idea?

A Complete Guide To Blueberry Wine