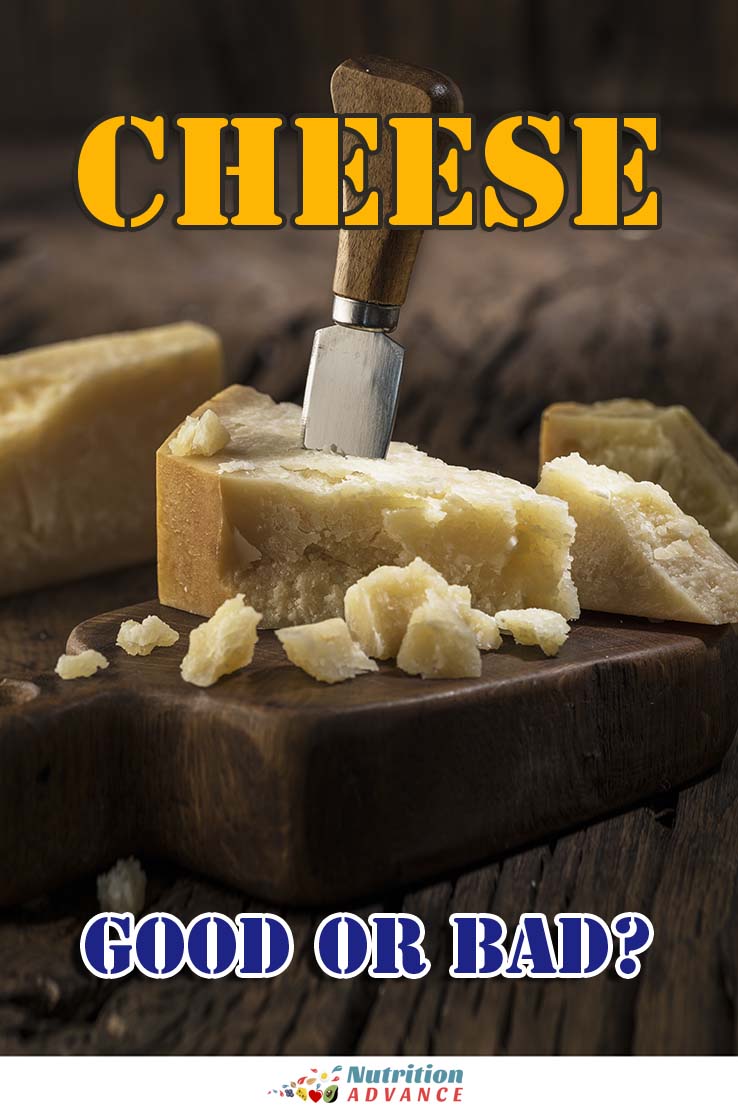 Cheese is delicious, extremely popular, and it plays a role in the culture and cuisine of nations around the world.

The question is: is it good for us?

In this article, we examine the potential positive and negative points of eating cheese.

Rather than opinion, let’s look at what the scientific research says.

Cheese is a Good Source of Nutrients 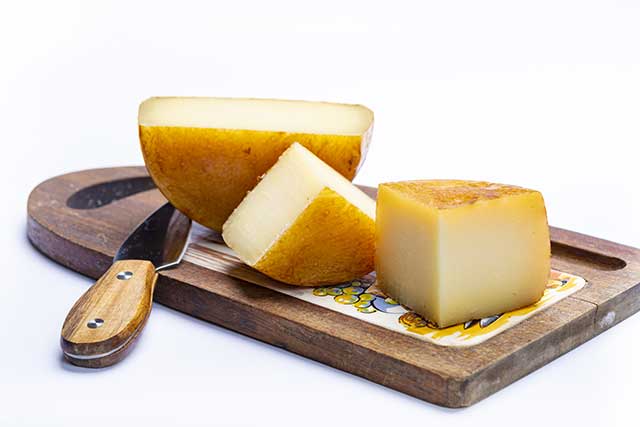 First of all, cheese has a reasonably good nutrition profile.

If we look at a basic Cheddar cheese, we can see that it provides high amounts of the following nutrients per 100 grams:

As shown in the above list, the single most abundant nutrient found in cheese is the mineral calcium.

Notably, calcium was identified by the 2015-2020 Dietary Guidelines for Americans as one of four nutrients of concern (1).

According to the official guidelines, most people in the United States do not consume enough calcium.

Key Point: Cheese isn’t the most nutrient-dense food in the world, but it is an excellent source of beneficial nutrients – especially calcium.

Cheese Is Relatively High In Sodium

Cheese producers use reasonably large amounts of salt in their products.

There are several reasons for using salt in the production process, and these include (2, 3):

Due to the liberal use of salt, cheese is one of the most significant dietary sources of sodium (4, 5, 6).

Firstly, we should clarify that sodium is an essential nutrient that plays numerous vital roles in human health (7, 8).

Furthermore, for most healthy people, a reasonable intake of salt is nothing to worry about.

That said, some individuals suffer from salt sensitivity and hypertension. In this case, foods that contain a large amount of salt can have a significant impact on blood pressure (9, 10).

For individuals who need to limit their sodium intake, regular cheese may not be an optimal choice.

However, there are also a variety of low-sodium cheese options available, which may be more suitable in this scenario.

Key Point: Cheese has a high sodium content, which could be an issue for some individuals.

A Source of High-Quality Protein

On the positive side, cheese offers a significant amount of high-quality protein, and it contains large concentrations of every essential amino acid (11, 12).

By ‘high-quality,’ this refers to the fact that not all foods are equal concerning the digestibility of the protein they offer.

For instance, protein-quality score systems, such as DIAAS, confirm that dairy protein has one of the highest digestibility values among all foods (12, 13).

DIAAS stands for digestible indispensable amino acid scores, and this system measures the true digestion of amino acids at the end of the ileum (small intestine) (14).

Depending on the specific type of cheese, the protein content can vary from around 25 grams to 35 grams per 100 grams.

To view the full nutrition profiles of numerous popular types of cheese, see this overview.

Key Point: Cheese is one of the best dietary protein sources.

Over recent decades, one negative viewpoint of cheese has come from its saturated fat content. Per 100 grams, an average Chedder contains 21 grams of saturated fat.

However, there appears to be something about the food matrix of dairy foods that influences their effect on blood lipids.

For example, dairy foods that have intact milk fat globule membrane (MFGM), such as cheese and yogurt, have little effect on LDL. On the other hand, butter, which has no MFGM, appears to raise LDL levels (16).

In this study, men and women were asked to consume 13% of energy in their regular diet from either cheese or butter.

13% of an average 2000 calorie diet is approximately 260 calories per day from butter or cheese.

(Note: for most cheese varieties, 260 calories would represent a serving size of roughly 70 grams).

After following this diet for six weeks, participants in the cheese group had the same LDL levels as their previous habitual diet. In contrast, LDL levels rose by 6.9% in participants from the butter group.

In this randomized and controlled trial, 85 participants with metabolic syndrome consumed either 80 grams of regular-fat cheese, 80 grams of low-fat cheese, or bread and jam per day for 12 weeks.

Perhaps contrary to expectations, 80 grams of regular fat cheese per day did not alter LDL levels over 12 weeks.

Additionally, a similar randomized controlled trial found that 80 grams per day of a Gouda-style cheese had no impact on LDL levels over an eight-week intervention (19).

Key Point: Cheese is high in saturated fat, but it doesn’t appear to have a significant impact on LDL cholesterol levels. 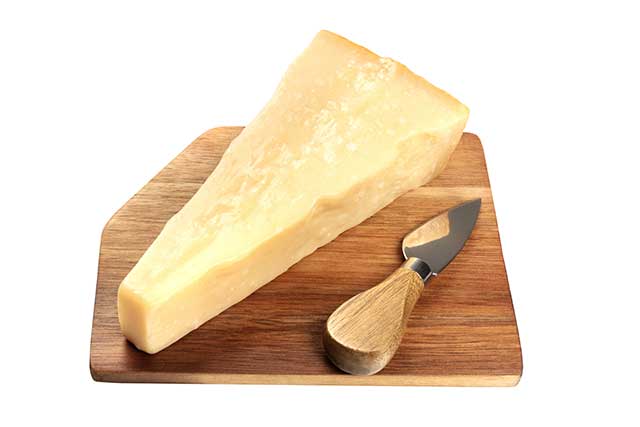 It is quite common to come across advice urging a reduction in cheese intake “for heart health.”

That said, as we have just seen, cheese does not seem to have a significant impact on the lipid profile. However, what does the research say about associations between cheese and cardiovascular disease?

Let’s take a look at some of the more recent rigorous studies in the way of systematic reviews.

This study was a recent systematic review and meta-analysis analyzing dairy consumption and cardiometabolic diseases.

The meta-analysis included 12 studies that focused on cheese intake, and it found that cheese had a neutral to inverse association with cardiovascular disease and coronary heart disease (20).

This study was a meta-analysis of 15 prospective studies, each with a duration of over ten years.

A dose-response analysis was completed, but the association was non-linear. However, the researchers noted that a daily cheese intake of 40 grams was associated with the most significant risk reduction.

This study was titled “Dairy consumption and CVD: a systematic review and meta-analysis.”

In total, this systematic review analyzed the results from 31 cohort studies and found that cheese intake had a statistically significant inverse association with cardiovascular disease (22).

This was a systematic review that examined the associations between cardiovascular-related clinical outcomes and dairy intake.

The review found that moderate-quality evidence supported an association between cheese intake and lower stroke risk.

In this study, researchers performed a systematic review and dose-response meta-analysis on the association between dairy products and type 2 diabetes.

Upon concluding their analysis, the researchers found that cheese intake was significantly inversely associated with type 2 diabetes risk (24).

Cheese Appears To Have Inverse/Neutral Assocations With Cardiovascular Risk

As shown in the five systematic reviews we just looked at; scientific research consistently finds cheese to have a neutral or inverse relationship with cardiovascular disease.

Since this is observational and not experimental research, it cannot establish a lack of cause and effect.

However, at present, the totality of evidence does not suggest cheese intake is bad for cardiovascular health.

On the one hand, cheese is high in calories and it can be relatively easy to over-consume.

However, numerous studies looking at populations with a high cheese intake don’t appear to show a link with obesity (25, 26, 27).

For example, in a cross-sectional study of the Basque population, featuring 1081 adults, participants with low or moderate cheese intake had a higher risk of being overweight. In contrast, participants with higher rates of cheese consumption had a lower risk (28).

Furthermore, a systematic review of dairy products and obesity examined several studies on cheese. These studies found cheese to have a neutral or slightly beneficial protective impact against being overweight (29).

That said, it is important to note that we can consume cheese in many different ways.

For instance, eating a serving of cheese alongside some fresh fruit could be part of a healthy eating pattern.

On the other hand, regularly eating cheeseburgers and pizza is unlikely to be conducive to weight management and overall health.

In other words, it is the whole dietary pattern that matters most.

Key Point: Cheese does not appear to be associated with weight gain. However, cheese is very energy-dense, and it is easy to over-consume.

One of the Best Sources of Vitamin K2

Cheese is one of the best dietary sources of vitamin K2.

This fact is especially true for medium to hard types of cheese such as Gouda, Jarlsberg, and Munster, which all contain large amounts of menaquinone-4 and menaquinone-7 (30, 31, 32).

Menaquinone-4 is a variant of vitamin K2 generally found in animal foods, and the biggest source of menaquinone-7 is fermented foods such as natto.

Research shows that vitamin K2 is more bioavailable than vitamin K1, and it is thought to potentially play a protective role in cardiovascular and skeletal health (32, 33).

Aside from natto and fermented black bean natto, hard European cheeses offer the most concentrated source of vitamin K2.

Key Point: Cheese is rich in vitamin K2, which may have benefits for cardiovascular and skeletal health.

On the negative side, dairy foods are one of the biggest causes of allergy in the world today.

Globally, lactose intolerance has been estimated to affect up to 65% of the population. However, the prevalence heavily depends on the specific demographic: the figure may be as low as 5% in Northern Europe or as high as 90% in East Asia (34, 35).

On the positive side, most people with lactose intolerance can still “tolerate” moderate amounts of dairy products.

The table below shows how the lactose content differs between milk and various types of cheese (36):

Since people with lactose intolerance can usually tolerate up to 12-15 grams of lactose per day, cheese shouldn’t be an issue for most people (37).

Unfortunately, some people are allergic to the protein in milk (and cheese).

Generally speaking, anyone with a true milk allergy should avoid all dairy products – including cheese (38, 39).

Key Point: Some individuals with sensitivities or allergies to dairy may not be able to consume cheese.

As shown in this article, cheese contains a good range of nutrients that may offer several benefits.

It is rich in protein, a good source of calcium and vitamin K2, and the highest level studies—systematic reviews—suggest it has a neutral or positive impact on cardiovascular health.

However, there is nothing about cheese that makes it an essential part of our diet, and most of the nutrients are available from other sources.

Overall, though, for those that enjoy cheese, it is tasty and reasonably nutritious food.

To read about one of the world’s most popular cheese options, see this guide to Brie cheese.