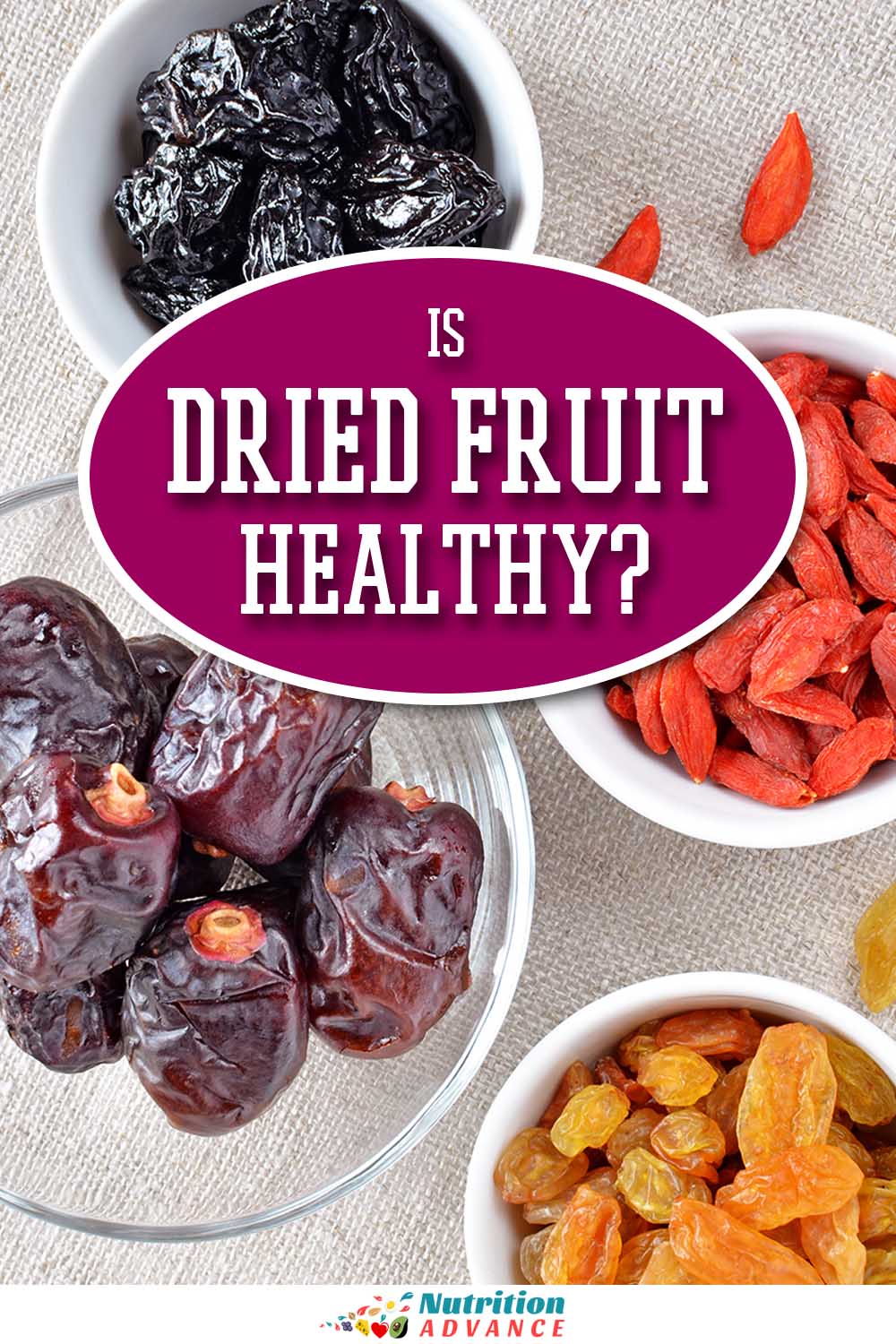 Dried fruit is regular fruit that has had most of its water removed.

This article examines dried fruit, how it compares to fresh fruit, its potential benefits and downsides, and how to use it.

Is it a healthy choice?

What Is Dried Fruit?

First, let’s look at what dried fruit is and how it is made.

There are three main ways for producers of dried fruit to make it:

Aside from slight degradation in vitamin C levels, dried fruits have a very similar nutritional profile to fresh fruit (2).

Most dried fruits have a chewy texture and a flavorful taste and contain a good range of nutrients.

Dried grapes, known as either raisins, sultanas, or currants, were the most popular dried fruit over the 2020-2021 season. Over this season, 1.2 million metric tons of dried grapes were produced, which accounted for 42% of global dried fruit production (3).

What Are Some Popular Varieties?

Here are some of the most common dried fruits available on store shelves:

Some dried fruits are sun-dried, some are dehydrated, and some can be freeze-dried.

Also, while some are just 100% whole dried fruit, others may have additional ingredients like added sugar and preservatives.

For more information, see this guide to dried fruit varieties and their nutritional values.

Key Point: There are a wide range of dried fruits available.

One of the main benefits of dried fruit is that it is convenient and highly portable.

For example, pouring a small amount of dried fruit into a container and taking it to work or school is simple.

We can also add it to lunchboxes, and it takes up very little space because of its small size.

The shelf life (or lasting time) is another positive about using dried fruit. While fresh fruit may last a week or perhaps a bit longer when refrigerated, dried fruit can last for months.

On this note, if you look at the label on a pack of dried fruit, it will usually show a use-by date at least four months from the date of purchase.

If stored correctly (sealed), dried fruit can last for months when stored at room temperature. Also, keeping it in the refrigerator will make it last even longer.

Key Point: Dried fruit is very portable and convenient for eating out of the home. Additionally, it lasts a lot longer than fresh fruit.

Sometimes you can hear people claim that dried fruit is too high in sugar and not the nutritional equivalent of fresh fruit.

However, this statement needs looking at with the appropriate context.

For one thing, dried fruit contains a similar amount of sugar as fresh fruit. For example, a prune (dried plum) still has a similar sugar content to a fresh plum.

Thus, when comparing equal grams of each, dried fruit will contain more sugar than fresh fruit. However, a dried apricot will not have significantly more sugar than a fresh apricot.

How Do Fresh and Dried Fruit Compare Nutritionally?

In one study, researchers compared fresh and dried varieties of the following fruits for micronutrient content:

After recording the level of vitamin C, folate, and various minerals, dried fruits had levels of these nutrients 3-5 times higher than fresh fruit at an equal weight (4).

Again, it is essential to note that this difference is because dried fruits are more concentrated in nutrients due to the loss of water weight.

Also, gram for gram, dried fruits have a higher energy density. Since dried fruit contains much higher calorie levels, consuming it in the same serving sizes as fresh fruit would be inadvisable.

For this reason, the typical suggested serving size of dried fruit is only around 30-40 grams.

Additionally, studies have demonstrated that sun-drying techniques can degrade the amount of vitamin C and carotenoids in fruit. Thus, fresh fruit may be a better choice if the priority is the highest vitamin content (2, 5).

Dried fruit is also an excellent source of polyphenols. Polyphenols are chemical compounds in plant foods that may provide health benefits (6, 7).

Key Point: Dried fruit provides a good source of nutrients and polyphenols. However, it may contain less vitamin content per individual dried fruit compared to in its fresh form.

One potential downside to point out about dried fruit is the relative ease of over-consumption compared to fresh fruit.

For instance, eating a handful of prunes (dried plums) is relatively easy. However, consuming a handful of fresh plums is much more difficult due to the water content and higher volume.

The higher water content and overall volume of the fresh fruit will trigger the release of more satiety hormones, which can help to suppress appetite (8).

Satiation refers to feeling satisfied after eating and not requiring further food intake.

However, although dried fruit isn’t as satiating as fresh fruit, it may be a more satiating choice than typical “snacks” like cakes and cookies. On this note, a 2021 randomized controlled crossover trial compared snacks of prunes to jelly beans concerning their effects on satiety and body weight (9).

The study provided “healthy snacking” instructions and assigned participants to a prunes or jelly beans snack group. The study found that participants assigned to the prunes consumed less food than the jelly bean group.

Tips For Consuming In Moderation

Some people tend to find dried fruit (as well as nuts and similar packaged foods) easy to over-consume. If this is the case, here are some general tips that can help to moderate dried fruit intake:

Key Point: It is easier to overeat dried fruit compared to fresh fruit. However, it is still a healthier snack than many popular snack options.

A 2011 study that analyzed data from the National Health and Nutrition Examination Survey (NHANES), 1999-2004, determined that dried fruit consumers have better-quality diets (10).

For the analysis, dietary data were collected from 13,292 adults. During the analysis, it was determined that 7% of these participants consumed dried fruit.

Compared to non-consumers, the consumers of dried fruit had (10):

Once again, the analysis had similar results; adults who consumed dried fruit (7.2% of participants) had improved diet quality scores and better health markers:

Interestingly, these results were despite the dried fruit consumers having a greater calorie intake (by 208-215 calories) than non-consumers on days when dried fruits were consumed.

Key Point: At population level, people who consume dried fruits have a higher diet quality and better health markers than people that don’t.

It is important to point out that some dried fruits contain added sugar.

Generally speaking, dried fruits with added sugars tend to be fruit that has slightly sour or tart taste characteristics.

When the water content is removed, the tart characteristic becomes more pronounced, and the manufacturers thus sweeten the fruit with sugar to make it more palatable.

The table below shows which dried fruits typically contain added sugars and which do not:

Based on a typical 2000-calorie diet, this would mean no more than 200 calories of added sugar (approximately 50 grams).

However, it is worth remembering that this guidance is based on maximum intake levels, and it is generally better to limit added sugar.

Key Point: Some dried fruit options contain added sugar. The only way to be certain is to check the ingredients label.

Some Dried Fruit Contains Sulfites, Which Can Cause Allergies

Some dried fruits contain sulfites among their ingredients.

Sulfites are used commercially in food production as a preservative, and we can find them in dried fruit, wine, and several other products.

However, sulfite “allergy” isn’t quite an allergy in the typical sense.

In their 2011 scientific review of allergenic food ingredients, Pedro A. Alvarez and Joyce I. Boye described this as follows (13):

“Sensitivity to sulphites is not an allergy per se but rather an adverse acute reaction to this inorganic substance,”

That said, no matter how we define sulfite allergy, some people suffer from it. For example, in people with asthma, somewhere in the range of 1 in 40 to 1 in 100 people has a sulfite sensitivity (14).

For this reason, anybody with sensitivity to sulfites should check dried fruit ingredients carefully to ensure they are not present.

Some common sulfites used as food additives are listed below alongside their ‘E numbers’ (15):

Key Point: Some varieties of dried fruit contain a preservative called sulfite, which can cause allergy-like reactions in some individuals.

Dried fruits can be used in many different ways. Here are some potential ways to use them:

Is Dried Fruit a Healthy Choice?

As shown in this article, there are many different dried fruit varieties, and they can potentially have both benefits and downsides.

However, answering the question of whether dried fruit is a healthy choice somewhat depends on the type of dried fruit and the comparator.

In other words, when we add or remove a particular food from our diet, we constantly replace one food with another.

With this in mind:

To summarize, dried fruit can be a healthy choice when consumed in appropriate serving sizes as part of a healthful diet.