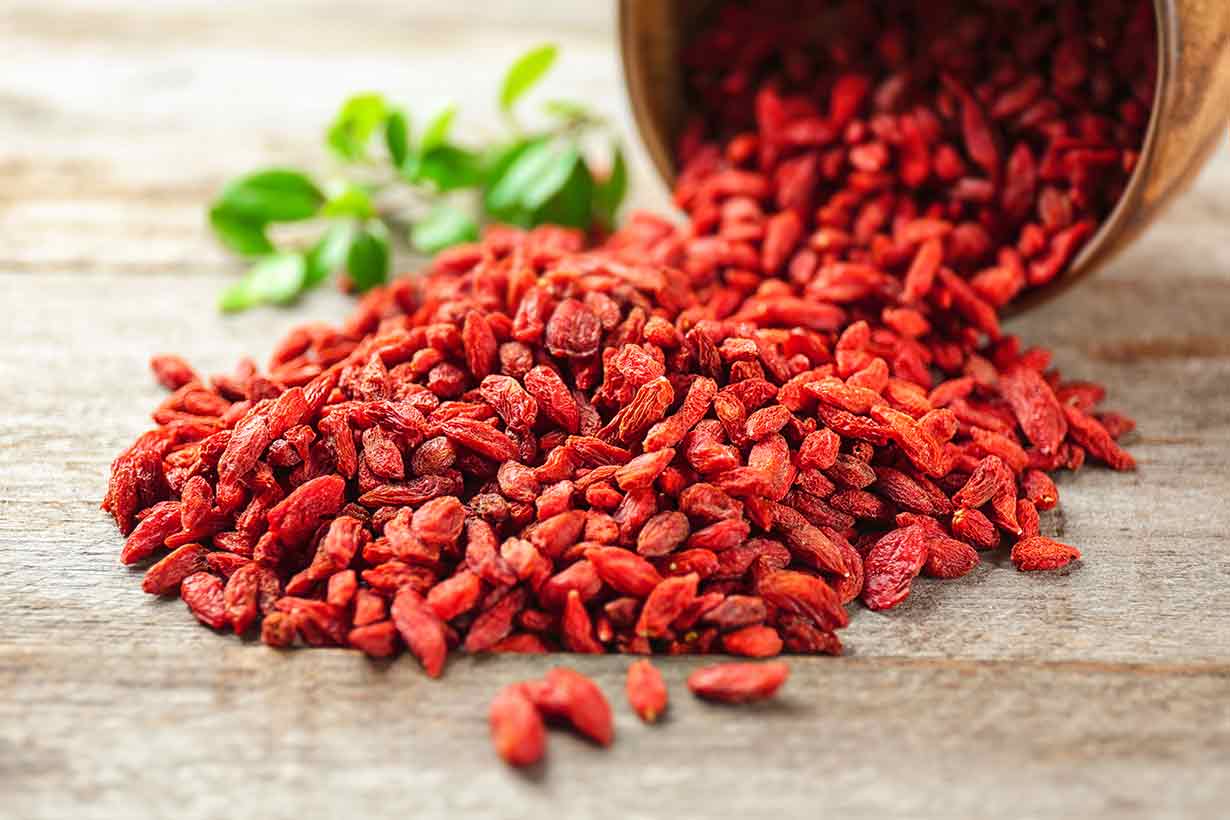 Also known as the Chinese wolfberry, this tasty fruit often receives the “superfood” tag from the media.

However, is this hype deserved, or is it all just marketing?

This article takes a look at the nutrition profile, health benefits, and concerns about goji berries.

What Are Goji Berries?

Goji berries are the fruit of either the Lycium barbarum or Lycium chinense plant, both of which are native to Asia.

The berries have a long history and have played a part in traditional Chinese medicine for over 2000 years (1).

In the modern day, goji berries grow in many different countries, including in Canada, the United Kingdom, and the United States.

We can eat goji berries in their raw form, made into a tea or wine, or in various recipes.

The main commercial production relates to goji berries in their dried fruit form.

Regarding appearance, goji berries are small and bright red berries in their fresh form.

Dried goji berries are more commercially prevalent, and they look something like red raisins.

Describing the taste of goji berries is a somewhat tricky task since they have a unique flavor.

In their fresh form, the berries have a bitter and astringent taste, with slightly sour notes and very little sweetness.

However, in their (more popular) dried form, goji berries lose a large part of their bitterness.

Dry berries are still slightly bitter, but they develop a sticky-sweet taste and consistency.

Key Point: Goji berries grow around the world, and they have a long history of medicinal use in China. The fruit tastes slightly bitter and sweet in its most popular, dried form.

The tables below show the nutritional values for one ounce (28 grams) of dried goji berries (3);

As shown, one ounce of goji berries is carbohydrate-dense and contains around 12.8 grams of fruit sugar. This amount is slightly less than the sugar a small apple would provide.

Surprisingly for a fruit, goji berries are also a source of amino acids, and one ounce provides 4 grams of protein.

As can be seen in the table, goji berries provide a substantial amount of vitamin A in the form of carotenoids.

The fruit also supplies a decent serving of copper, selenium, and vitamin C.

Key Point: Like most fruit, goji berries are predominantly a source of carbohydrate. Additionally, they offer a small amount of protein and large amounts of vitamin A. 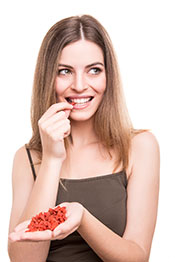 Although their purported Chinese nickname is ‘the fruit of longevity,’ we should not place too much emphasis on this.

Unfortunately, the vast majority of articles on goji berries exaggerate their relative health benefits with claims that the evidence does not substantiate.

In other words; there is zero evidence that shows goji berries prolong lifespan or prevent/cure cancer.

Despite this, these little red berries do still have some decent health benefits.

Goji berries contain significant concentrations of carotenoids which are responsible for the fruit’s orange/red hue.

Among these compounds, zeaxanthin is the primary carotenoid, and it also functions as an antioxidant (4).

Another carotenoid that goji berries provide is beta-carotene, a precursor to vitamin A. While vitamin A from plant foods is not as bioavailable as retinol (from animal foods,) it can still be beneficial.

This essential vitamin is responsible for several crucial processes in the body, including growth and development and the optimal functioning of the immune and visual systems (5).

Various studies demonstrate that a higher skin concentration of carotenoids helps to protect the skin from UV-induced damage (8, 9, 10).

Key Point: Goji berries contain significant concentrations of carotenoids, which are good for skin and can convert to vitamin A.

The second most prevalent vitamin in goji berries is vitamin C.

With approximately 23% of the RDA per ounce, the berries are a vitamin C-rich food source.

Vitamin C plays a critical role in our whole body’s health, and it is responsible for;

Interestingly, vitamin C also appears to boost the amount of iron we can absorb from non-heme (plant) sources (15).

Although they do not have direct antioxidant activity as once believed, polyphenols appear to up-regulate numerous biological processes (16, 17).

In other words, they can make various systems (such as inflammatory response) work better.

As one of the most concentrated sources of polyphenols, goji berries provide a range of interesting compounds.

The most prevalent of these polyphenols include rutin, scopoletin, caffeic acid, coumaric acid, moupinamide, and a range of flavonoids (18).

These compounds may have several benefits for health, such as helping to lower blood pressure (19, 20).

As previously mentioned, goji berries contain a wealth of carotenoids.

Among these compounds, the berries are an especially good source of zeaxanthin and lutein. Zeaxanthin and lutein play a role in our visual health, and some studies suggest they may help to prevent or reduce the progression of macular degeneration (21, 22).

In one study, 13.7 grams of goji berries per day “significantly increased” plasma levels of zeaxanthin. This particular trial lasted for 90 days and featured 150 participants.

The study results found that the 75 individuals taking goji berries every day experienced a 26% increase in plasma zeaxanthin compared to the 75 participants in the blinded control group (23).

However, these findings are from in-vitro (cell culture) studies, and there is currently no evidence for the same effect within the human body (24).

While nobody should eat goji berries specifically for protein content, it is a nice little bonus.

Concerns and Side Effects

Now that we have looked into the health benefits of eating goji berries; what concerns are there?

Sadly, there are some negative points about the fruit that people should be aware of.

Yes, fruit sugar may be natural, but it can still be problematic in excessive amounts.

While a handful of goji berries from time to time is no problem, continually snacking on them could become an issue.

The total content does not sound significant, but it is approaching a sugar-density of 50%, so the sugars can quickly add up in bigger portions.

Goji berries may also spike blood sugar levels, and this may be an issue for people with diabetes or anyone watching their carbohydrate intake.

If a superfood truly exists, it would probably have to be either organ meats or shellfish due to their outstanding nutrient density.

Although goji berries can be healthy, the “superfood” claims are more for marketing purposes.

After all, everybody is going to be interested in a product that claims to offer longevity benefits and extend lifespan.

Unfortunately, there is just no evidence for these claims, and exaggerated marketing has allowed a whole industry to spring up.

For example, products like ‘goji juice’ and small packets of ‘goji extract powder’ commanding a fee of $20 is poor value for money.

Real goji berries in their whole food structure (complete with fiber) are the healthier and better-priced option.

Key Point: Be wary of over-hyped goji products. They may have some benefit, but they are overly expensive and the whole fruit is a better option.

Many common foods and drinks can have interactions with prescription drugs, and this is the case for goji berries.

Specifically, anyone who is using blood-thinning medication such as warfarin may wish to discuss with their doctor.

Various case studies document adverse reactions between warfarin and goji berries. For this reason, researchers believe it is “probable” that the berries can boost the anticoagulant effects of the blood-thinner warfarin (26, 27, 28).

Key Point: There are numerous documented adverse reactions between goji berries and warfarin.

Lastly, the price of goji berries is an issue, and they are expensive for what you get.

With a price range hovering around $15 to $20 per pound, they cost substantially more than a punnet of fresh strawberries or blueberries.

Are they worth that much money?

For me, probably not.

How To Eat Goji Berries

Since not many people are aware of all the different forms of goji berries, here is a quick look at how we can consume them.

Are Goji Berries Good For You?

This article shows that goji berries have a range of positive health benefits, but they are often somewhat exaggerated.

Furthermore, the deceptive marketing surrounding the fruit overplays their positives and drives up the price.

Despite this, goji has an excellent nutrition profile for a fruit.

These little red berries are relatively nutrient-dense, provide protein, and contain a range of interesting compounds.

That said, due to their price and the high sugar content of dried fruit, it may be better leaving them for an occasional treat.

For a more regular thing, any fresh berry will offer many of the same benefits for a lower price.

Looking for more on berries? Then see this complete guide to mulberries.