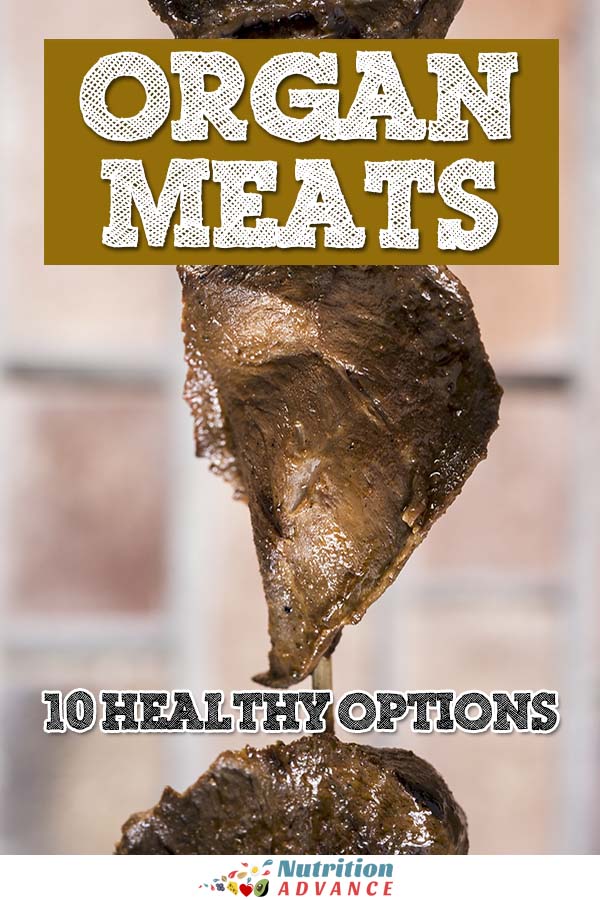 Organ meats are otherwise known as offal, and they were once a reasonably common food choice, particularly foods like liver and kidney.

However, they have declined in popularity over recent decades, and they aren’t as popular as regular cuts of meat like beef, chicken, and pork.

Despite this, organ meats are very nutritious and often provide more nutritional value than regular meat.

This article provides a guide to organ meats and a list of 10 different varieties alongside their nutritional values. 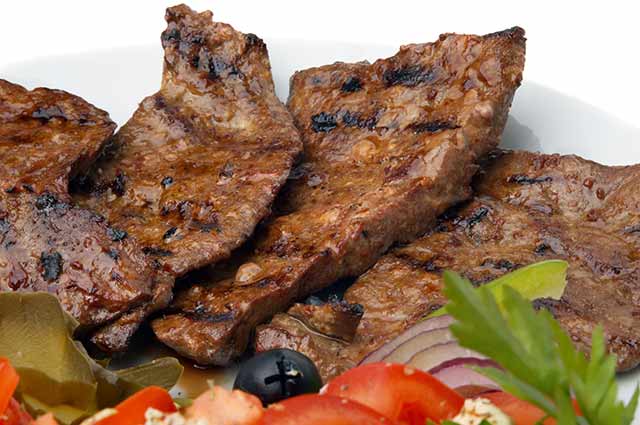 Liver is one of the most popular organ meat choices, and it is among the most nutrient-dense of all foods.

Compared to regular meat, liver offers the same protein content for fewer calories, and it is also an excellent source of micronutrients.

For instance, beef liver offers more than 500% of the daily value for copper, vitamin A, and vitamin B12. Further to this, it supplies significant amounts of many other vitamins and minerals (1).

It is possible to buy a range of different liver products, but the most popular tend to be beef, chicken, lamb, and pork livers.

Generally speaking, most people cook liver by pan-frying. Liver and onions is a popular (and quite traditional) combination.

There are also many popular food products made with liver. These products include a German liver sausage called liverwurst and a spreadable paste called pâté, which often features liver as a primary ingredient.

One thing worth noting is that many people find the texture and flavor of liver to be offputting. Among the various liver options, chicken livers are softer and milder in taste, and they may thus be preferable to other choices.

For further detailed information on liver, see these guides to beef liver and chicken liver.

Key Point: Liver is a nutrient-rich source of protein, B vitamins, vitamin A, and numerous other micronutrients. 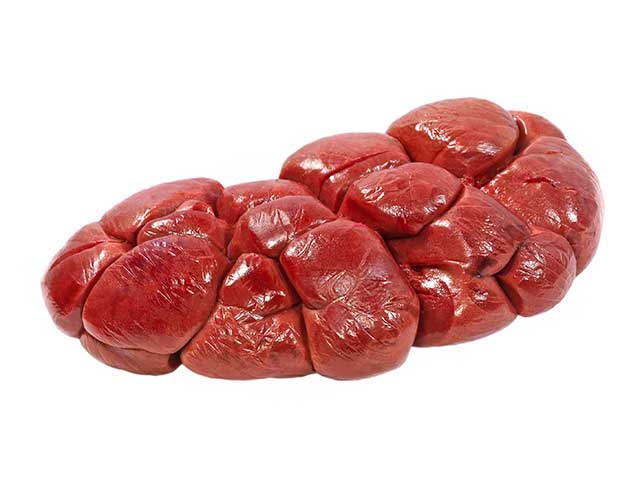 Kidney has not been as popular in recent decades as it used to be.

Aside from these nutritional values, kidney tends to be extremely rich in B vitamins and selenium.

Key Point: Kidney is an ingredient in several traditional dishes, but it isn’t as popular as in past times.

The nutritional properties of different food products are always interesting.

Since spleen is one of the lesser-known varieties of organ meat, the following diagram shows the precise location: 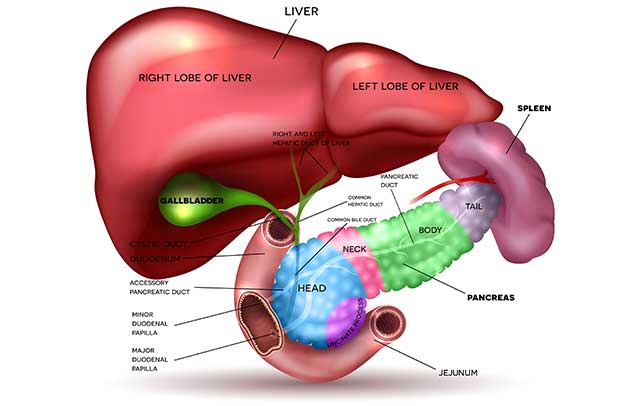 As shown in the diagram, the spleen is located at the tail end of the pancreas.

Spleen also contains a significant amount of selenium, iron, and vitamin B12. Considering the low amount of calories and the reasonable serving of protein spleen provides, it is also very protein-dense.

Despite this, spleen is not an everyday food ingredient in the Western world, and it is difficult to find on store shelves. 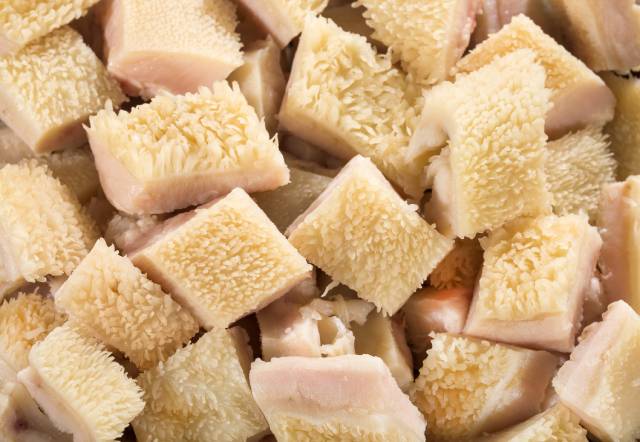 Tripe refers to the edible stomach lining of various animals. Among the different varieties, beef tripe tends to be the most common.

As a food item, tripe is one of the more common organ meats. Tripe is relatively popular around the world, particularly so in East and South-East Asian nations.

These dishes include various Chinese, Japanese, and Korean ‘hot pot’ dishes such as motsunabe and jeongol.

Tripe also appears in a range of traditional European recipes, but as with many types of organ meat, it isn’t as popular as in past times.

Per 100 grams, tripe also offers 58% of the daily value for vitamin B12 and a good amount of the vitamin-like nutrient choline (5).

Key Point: Tripe is among the more popular organ meats, and it features in dishes from cuisines around the world. 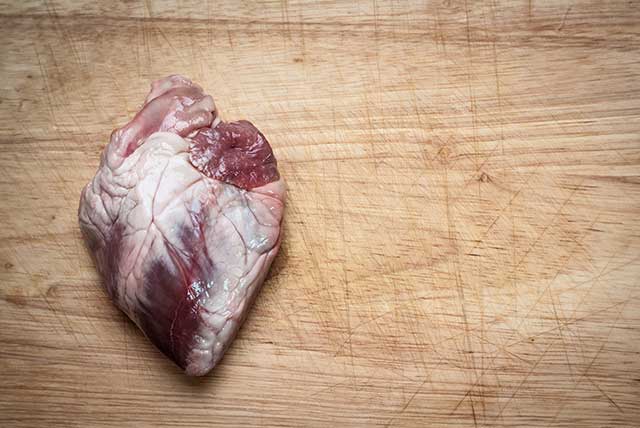 Heart is a nutritious muscular organ meat that provides a rich range of vitamins and minerals. There are many different varieties available such as beef, chicken, lamb, and pork.

However, looking at each one’s nutritional profile, lamb heart appears to be the most nutrient-dense among the available options.

If you haven’t heard of sweetbreads before, you probably wonder why sugary bread is on a list of organ meats. Despite the confusing name, sweetbreads have nothing to do with bread, and it is the culinary name for the thymus and pancreas organs.

Compared to other organ meats, sweetbreads are much higher in fat and lower in dietary protein. Despite their unusual appearance, they are widely regarded as being among the best-tasting organ meats.

A sauteed sweetbread can be seen in the image below:

Likely due to their fat content, sweetbreads do not have the strong flavor and texture other organ meats possess. Sweetbreads have a soft and tender texture alongside a mild flavor.

Sweetbreads are also a good source of numerous vitamins and minerals, and they supply more than 500% of the daily value for copper (9).

See this full guide to sweetbreads for more information.

Key Point: Sweetbreads are an unusual type of organ meat, but they are rich in nutrients and have a relatively mild taste. 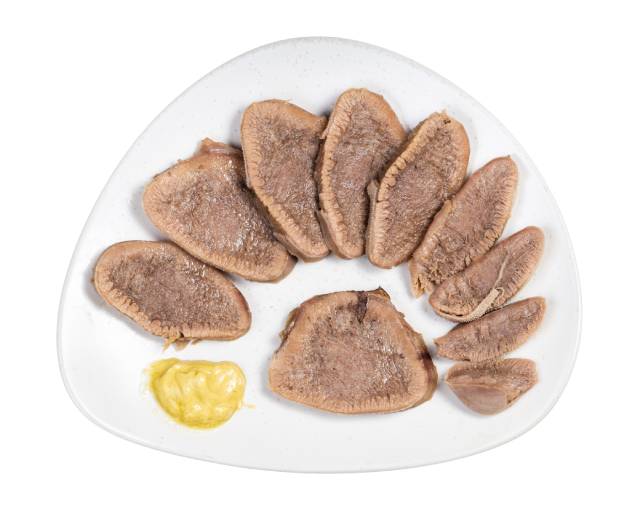 Tongue is classed as a type of organ meat, and it a muscular organ found just above the floor of the mouth.

Cow tongue, otherwise known as ox tongue, enjoys popularity around the world. However, it is somewhat of a delicacy and relatively expensive.

This organ meat is quite fatty, and it tends to contain more fat than protein.

In terms of tongue’s micronutrient profile, it tends to be similar to regular beef. It offers large amounts of vitamin B12, B vitamins, iron, and zinc (10).

Key Point: Tongue is a popular form of organ meat with a similar nutritional profile to regular meat. 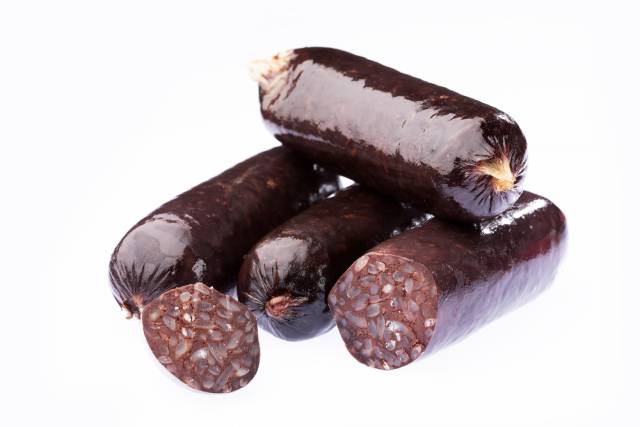 There are a wide variety of blood-based foods, such as blood sausage.

While not technically offal, these foods tend to be classified as organ meat, and they sometimes contain other ingredients such as liver.

One of the most popular is blood sausage, otherwise known as black pudding or blood pudding.

In Asian cuisine, a variety of blood curd soups and stews also enjoy popularity. One of the most famous of these originates in China, known as ‘blood tofu.’

Key Point: There are various blood-based foods consumed in cuisines around the world. Blood sausage is probably the most popular of these foods. 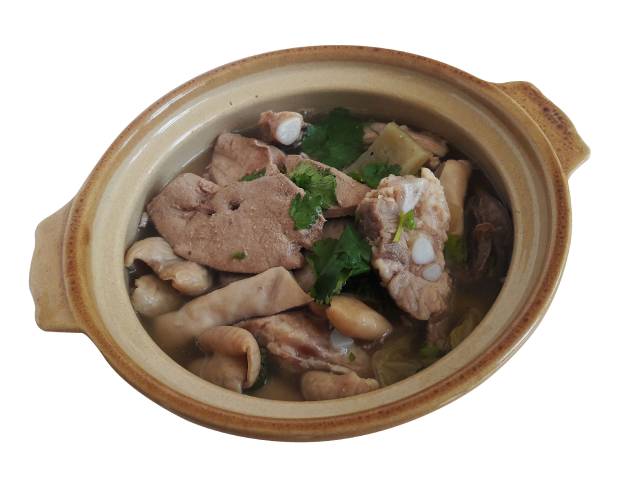 Intestines have been part of human diets for hundreds of years, and they were once a staple food among the poor.

Compared to past consumption rates, intestines have declined in popularity as food in the United States and Europe. However, they are still relatively common in many parts of Asia.

Per 3.5 oz (100-gram) serving of pork chitterlings, they will provide the following nutritional profile (12):

Key Point: Intestines, commonly known as chitterlings, are consumed around the world. However, they tend to be more popular in Asian cuisine in modern times. 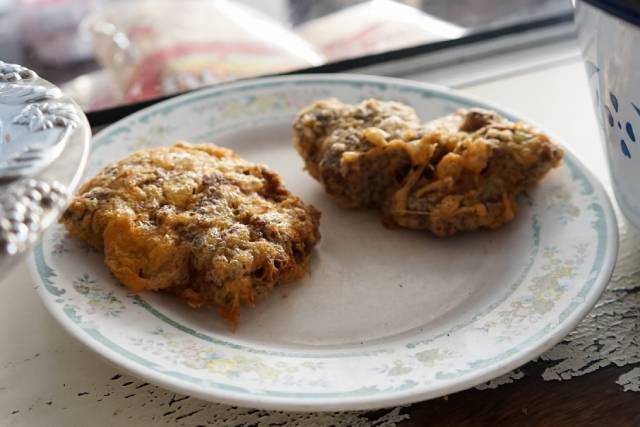 Perhaps not for the squeamish, but brains are another variety of organ meat consumed around the world.

Several traditional dishes from Chinese, French, and Indian cuisine incorporate brains. One of the more popular of these dishes is a French dish called cervelle de veau, which refers to beef brains often served in a butter sauce

On the negative side, questions have been raised about the safety of consuming brain foods.

Although there are many uncertainties in the existing research, these concerns generally relate to potential links that have been made between prion diseases, such as Variant Creutzfeldt-Jakob disease, and brain consumption (13, 14).

Beef brain provides 1.23 grams of omega-3 per 100 grams, similar to what some oily fish species offer. It also offers a large amount of vitamin B12, equal to around 450% of the daily value (15).

Key Point: Brain is a nutrient-dense food, but some potential concerns exist regarding links between prion diseases and consuming brain from infected animals.

While organ meats provide a lot of nutritional value, individuals monitoring their saturated fat or dietary cholesterol intake may need to be careful with their intake.

In this regard, some organ meats are quite high in saturated fat and cholesterol. For example, 100 grams of beef liver contains 396 mg of dietary cholesterol (1).

The Dietary Guidelines for Americans used to recommend limiting dietary cholesterol to 300 mg per day. However, this limit was removed from the 2015-2020 guidelines onward due to the lack of clear evidence between dietary cholesterol intake and cardiovascular disease (16).

That said, research has shown that dietary cholesterol can significantly increase LDL cholesterol levels in some individuals (17).

Organ meats are packed with nutritional value, and incorporating them into our diet tends to offer more nutrients than regular meat cuts.

However, as with any food, they are by no means necessary for a healthy overall diet.

For those who don’t like typical organ meats such as kidney and liver, liver-based spreads such as pate and liverwurst can be an excellent way to incorporate organ meats.

What is Pâté? Nutrition Facts, Benefits, and Drawbacks

12 Types of Meat and Their Nutritional Values

What Is Liverwurst and Is It Good For You?

Is Beef Liver Good or Bad For You?

What Are Sweetbreads? (and How To Cook Them)