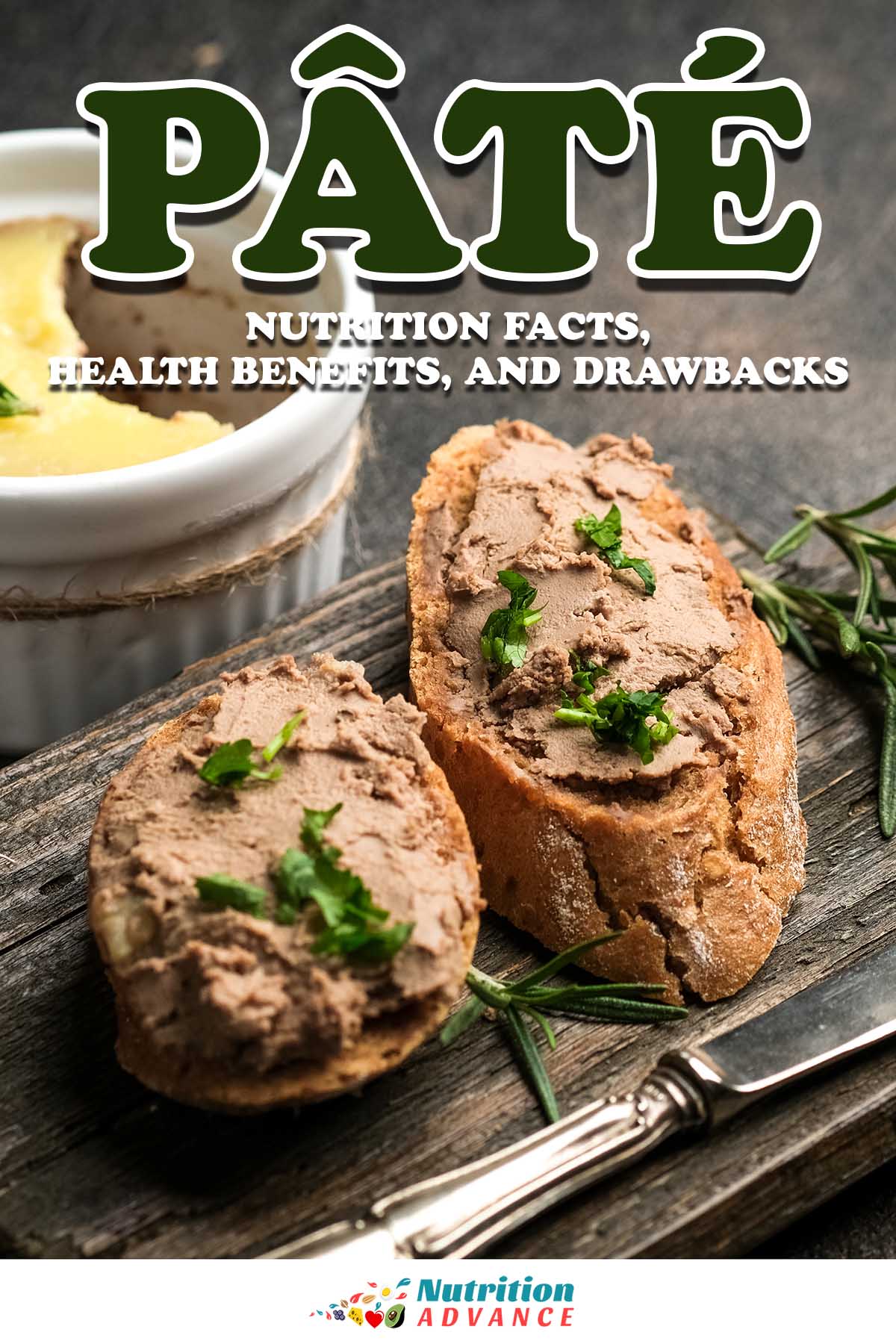 Pâté is a traditional food that fuses liver, fat, and a variety of herbs and spices for seasoning.

This article examines what pâté is, what it offers nutritionally, and the potential benefits (and drawbacks) of consuming it. 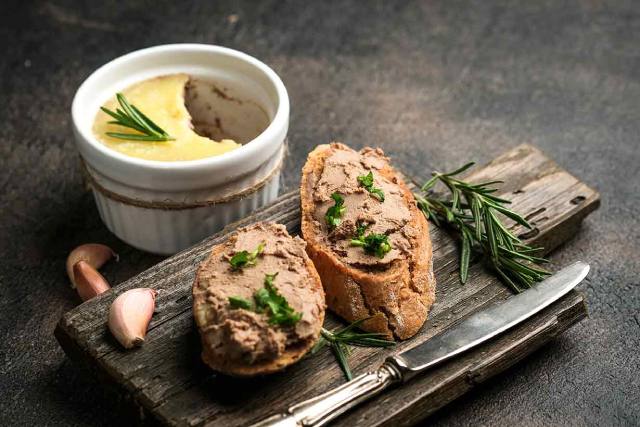 Pâté originated in Belgium, and people enjoy it all around the world, but it is most popular in Belgian and French cuisine.

There are numerous different varieties of pâté. Some of these are soft and spreadable, while others have a firmer texture that makes them sliceable.

For each variety of pâté, the ingredients used may differ.

However, among these ingredients, pâté will typically include liver, animal fat, salt, and seasonings that include herbs and spices.

Most of the nutritional benefits of pâté come from its liver content. For those unaware, liver is a major source of essential nutrients.

Pâté is quite versatile, and there are many ways to use it, which we will look at in more detail later in this guide.

Key Point: Pâté is a traditional European food, and it is an often spreadable blend of liver, fat, and seasonings.

Pâté is an excellent source of essential nutrients.

As previously mentioned, there is a wide range of different pâté products, so the nutrition profile will slightly vary depending on the specific variety.

That said, here is the nutrition profile (per 100 grams) for a typical pâté product.

The source of the nutritional data is the NCC Nutrition Database.

Pâté is a rich source of vitamins, particularly vitamin A and the various B vitamins.

Key Point: Pâté is primarily a source of protein and fat, and it contains a wide range of essential nutrients.

Pâté is a rich source of retinol (vitamin A)

Pâté is a significant source of retinol, which is the preformed form of vitamin A.

As shown in the nutrition profile, just one ounce (28.5 grams) of pâté offers double the recommended daily value for vitamin A.

While many foods contain carotenoid sources of vitamin A, these compounds need converting into retinol before the body can use them. Unfortunately, this conversion can be unreliable, and there is genetic variability in how well humans metabolize carotenoids (1).

According to the Food and Nutrition Board at the Institute of Medicine of the National Academies, 12 mcg of dietary beta-carotene is only equivalent to 1 mcg of retinol. From 2020 onwards in the United States, carotenoid sources of vitamin A need to state their ‘retinol activity equivalent’ on labels using this formula (2).

Therefore, as a preformed source of vitamin A, pâté offers a substantial—and reliable—source of the vitamin.

Among its many functions, vitamin A plays a critical role in the human immune system, and it is also important for maintaining healthy eyesight (3, 4).

Key Point: Pâté is one of the best dietary sources of vitamin A.

Liver, kidney, and other types of offal are among the most nutrient-dense foods in the human diet.

However, the popularity of these foods has been in decline over recent decades, and many people don’t particularly enjoy organ meat.

On this note, pâté offers a simple way for people to consume more liver:

Since pâté is a convenient way to consume “hidden” organ meat, it allows people who wouldn’t otherwise eat liver to get a wide range of extra nutrients into their diet.

Although pâté offers a lot of nutritional value, there are some potential concerns to be aware of too.

One potential concern with pâté is the sodium content. With nearly a gram of sodium per 100 grams, pâté is a high-sodium food (5).

If truth be told, salt offers a lot of benefits in food manufacturing. In addition to its role in improving the taste of food, salt also functions as a preservative to prevent bacterial spoilage (6).

Furthermore, we shouldn’t forget that sodium is an essential nutrient with a wide range of vital functions in the human body (7).

That said, excessive sodium consumption can be problematic, and this is particularly the case when potassium intake is low. These two minerals are electrolytes, and together they play a crucial (opposite) role in regulating fluid balance and blood pressure (8).

In particular, individuals with salt sensitivity hypertension need to carefully monitor their sodium intake due to the effect it can have on blood pressure (9).

Key Point: Pâté is relatively high in sodium. People consuming a sodium-restricted diet should be aware of this.

May contain nitrate and nitrite as preservatives

Although this is not the case for all commercial pâté products, a majority contain sodium nitrite and sodium nitrate as preservatives (10, 11).

In recent years, the World Health Organization (WHO) deemed processed meats containing these preservatives to be carcinogenic to humans (12).

It is thought that nitrite (and nitrate that breaks down into nitrite) can form nitrosamines, particularly when exposed to high-heat temperatures. Nitrosamines are potential carcinogens to humans (13, 14).

However, the absolute risk from consuming these preservatives does not appear to be as significant as some media sources suggest.

For example, a recent meta-analysis—the highest level of scientific evidence—examined 49 studies that featured more than one million participants (15).

This meta-analysis demonstrated that the highest levels of nitrate intake were associated with a weak (but statistically significant) decreased risk of gastric cancer. However, higher nitrite intake appeared to increase the risk, but not significantly so.

The researchers concluded that there is “limited evidence” that nitrates and nitrites increase cancer risk.

That said, for those who wish to consume pâté but hold concerns over the preservative content, there are two options:

There are numerous pâté recipes available online, and this one provides a simple recipe.

How to eat pâté

There are many different ways to eat pâté.

For those who are not familiar with this food, here are some popular ways to use it.

The traditional French style of eating pâté is alongside some bread.

To eat it in this way, just spread the pâté on some slices of toasted bread (or baguette).

2) As a meat topping

For a more carnivorous meal, try spreading some pâté on the top of steak for some extra flavor.

Another simple way to eat pâté is to use it as a dip with some celery sticks. Other vegetables such as carrots work in this regard too.

4) As a topping for a baked potato

One more quick and easy way to use pâté is as a topping for a baked potato.

Once the potato is ready, add a bit of butter and then spread the pâté on top.

Organ meats aren’t for everyone, and many people struggle with the idea of eating offal.

On the positive side, pâté can be an excellent way of getting the nutrients that organ meat provides into the diet.

Pâté is more visually appealing, it arguably tastes better, and it has almost as much nutritional value.

As a result, even small amounts of pâté can be a beneficial addition to the average diet.

For more ways to eat organ meat, see this guide to liverwurst.