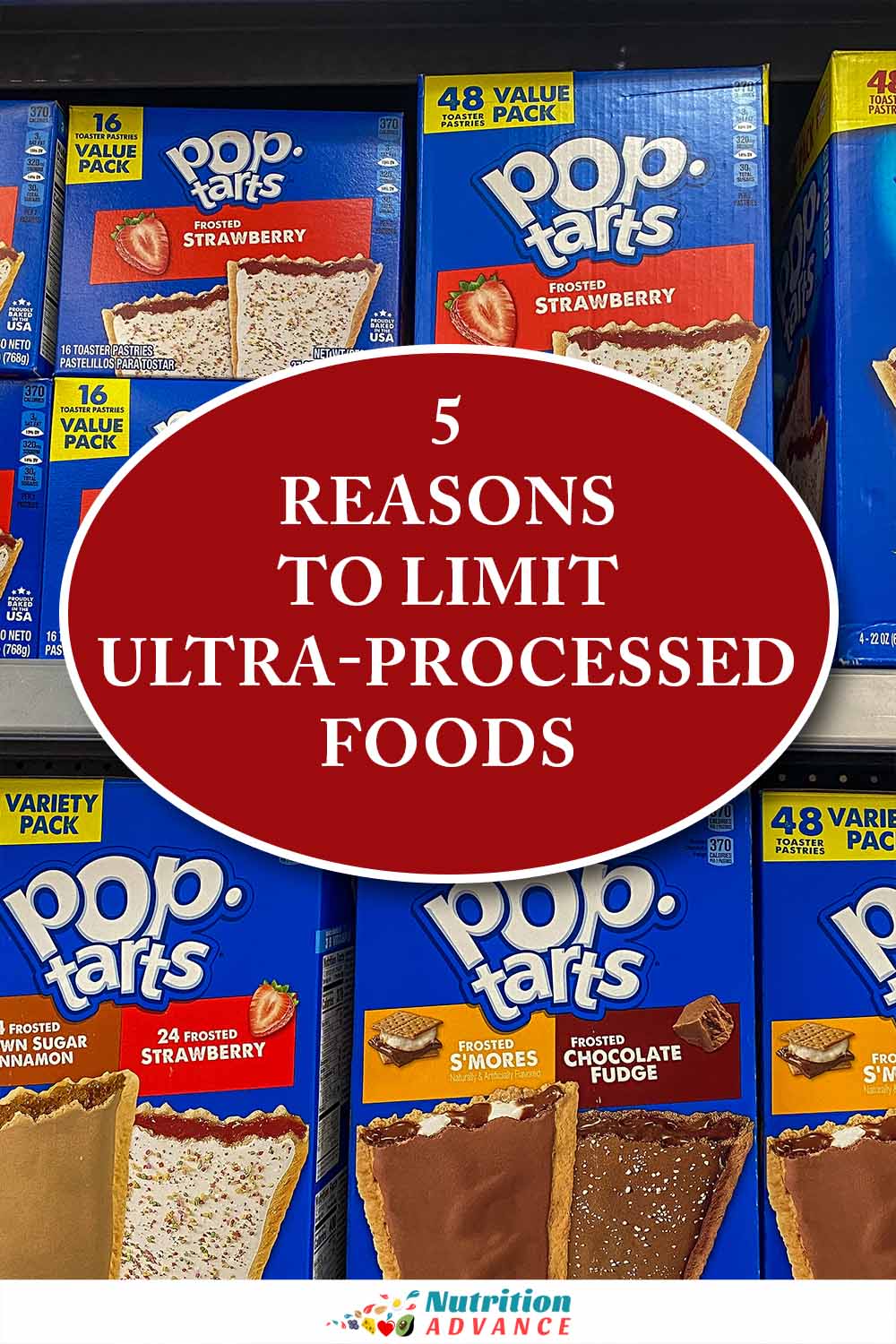 Globally, the rising prevalence of obesity and type 2 diabetes is alarming.

One likely causal factor in this trend has been the progressive increase in the consumption of ultra-processed foods.

Unlike other food categories, ultra-processed foods can have several negative influences on our diet.

This article provides a guide to ultra-processed foods and some evidence-based reasons to limit their intake.

What Is Ultra-Processed Food?

First of all, let’s define what ultra-processed food is and what it isn’t.

According to NOVA, we can define ultra-processed food as: “foods, such as soft drinks, sweet or savory packaged snacks, reconstituted meat products and pre-prepared frozen dishes, are not modified foods but formulations made mostly or entirely from substances derived from foods and additives.”

For further information, the full NOVA definitions are available here.

It is also crucial that we make a clear distinction between ‘processed’ and ‘ultra-processed’ food.

First, processed foods can be relatively healthy and often involve simple processes, such as mashing or blending whole foods and perhaps adding a few ingredients. Some nutritious examples of processed food include cheese, guacamole, hummus, and tomato paste.

Why Is Ultra-Processed Food a Problem?

By its very nature, ultra-processed food is unlikely to be as nutritious as whole foods are.

However, the overall dietary pattern comes first, and ultra-processed food is not inherently harmful in itself.

The main problem is that we eat too much of it, and it often displaces more nutritious food as a regular part of our diets. On this note, recent research has demonstrated that the average American consumes approximately 60% of their calories from ultra-processed foods (3).

Even more significantly, a recent large cohort study of 33,795 Americans aged between 2 and 19 found that this age group consumed 61% of their calories from ultra-processed food in 1999. By 2018, intake had increased to 67% of total energy intake (4).

Let’s now examine why this increased consumption of ultra-processed food is problematic.

There is something about many ultra-processed foods that doesn’t quite satisfy our appetite in the same way as whole foods do. In other words, many of these food products don’t provide the satiety response that allows us to regulate our intake.

Over recent years, several studies have supported this notion, demonstrating that ultra-processed food likely encourages over-consumption of food. For instance, a recent study led by respected metabolism and obesity researcher Kevin Hall made some striking findings (5):

Across studies from numerous countries, including the United States, United Kingdom, and France, higher levels of ultra-processed food consumption were strongly (and consistently) associated with higher BMI and an increased risk of obesity (6, 7, 8).

Key Point: Greater consumption of ultra-processed food is associated with higher risk of obesity. Furthermore, it appears to encourage the over-consumption of food.

In addition to its influence on energy intake and weight gain, research rather consistently demonstrates an association between ultra-processed food and an increased risk of disease/mortality:

Put simply, hyperpalatable means that the ingredients in food combine in a way that makes it highly pleasurable to eat.

According to research on hyperpalatable foods, they very frequently meet one of the following characteristics (12):

In addition to these properties, manufacturers engineer hyperpalatable foods to have the perfect crunch, mouthfeel, texture, and other desirable characteristics that make them pleasurable to eat.

As a result, these foods are much easier to over-consume than regular whole foods, as shown in the previously mentioned study led by Kevin Hall (5).

When we consume these energy-dense foods with desirable traits, the brain’s reward system is activated, and dopamine (a feel-good neurotransmitter) is released (13).

Research has demonstrated that food cravings and hunger are separate entities. Foods that stimulate the brain’s ‘reward system’ can interfere with our decision of when (and what) to eat (14, 15).

The potato chip brand ‘Pringles’ once ran a famous commercial with the slogan ‘once you pop, you can’t stop’ – this is the aim of these foods.

One of the most important reasons to limit ultra-processed food is that many of the available options are energy-dense yet provide very little nutritional value.

For example, 100 grams of salmon and a cup (91-gram) of broccoli offer significant amounts of protein, B vitamins, folate, phosphorus, selenium, and vitamins C, D, and K for only 239 calories (16, 17).

On the other hand, a medium-sized (57-gram) croissant offers almost no protein and only small amounts of vitamins and minerals for 231 calories (18).

5) Ultra-Processed Foods Contain Multiple Ingredients That Should Be Limited

However, many ultra-processed foods contain these nutrients in excessive quantities.

Refined grains, sugar, and salt are commonplace, and palm oil is often used, a significant source of saturated fat.

Notably, research worldwide demonstrates that a higher intake of ultra-processed foods leads to non-recommended intake levels of these nutrients. As ultra-processed food intake increases, the consumption of refined grains, saturated fat, salt, and sugar goes up (21, 22, 23, 24).

Thus, consuming these nutrients within recommended levels is much easier when diets are based on whole foods rather than ultra-processed options.

Some Caveats: Sometimes Ultra-Processed Foods Can Be Useful or Even Beneficial

Despite the previous points about the potential harms of ultra-processed food, it is essential to display some nuance.

Firstly, not all ultra-processed foods are made the same, and just because something is ‘ultra-processed’ doesn’t automatically make it “bad.”

Additionally, some can offer good nutritional value and others can be beneficial depending on the situation.

Here are some examples.

However, these products tend to offer a significant amount of protein for minimal calories and a good range of vitamins and minerals (25).

Athletes around the world use whey protein to support their goals. On this note, a systematic review and meta-analysis of the available evidence found that whey protein was safe and highly effective, offering benefits for improved performance (26).

While some prepared ‘ready meal’ products are very poor nutritionally, this isn’t the case for all of them.

For example, some fresh products contain nothing other than whole foods supplemented with salt, herbs and spices, butter/oil, and perhaps a little bit of a thickener such as cornmeal.

While this combination of ingredients in one product is classed as ‘ultra-processed,’ it is not much different from the ingredients many people use at home to make a recipe.

Furthermore, such options may actually encourage a healthier eating pattern for those short on time.

For instance, individuals with demanding lifestyles and little time for home-cooking could include more whole foods in this way (rather than opting for nutritionally poor fast food or takeout food).

Diet soda will never win any ‘healthiest drink’ awards, and drinks like water, tea, and coffee are better choices.

However, particularly for those who enjoy sugar-sweetened beverages, diet soda offers a calorie-free taste that is somewhat similar.

Despite being ultra-processed, these drinks can help satisfy sweet cravings. Further, they can improve health outcomes when used as substitutes for the ‘full sugar’ versions.

Notably, this has been demonstrated by randomized controlled trials, with reduced energy intake and weight loss being the results (27, 28).

Key Point: In some situations, ultra-processed foods can be convenient, useful, and even beneficial.

As shown in this article, there are several important reasons to limit the intake of ultra-processed foods.

Nutrient-rich whole foods define all healthy dietary patterns, and most of us need to consume more of them.

However, ultra-processed food should still be judged with nuance and based on the specific food and its ingredients, rather than assuming it is “bad” by name alone.

This mistake has been made too many times before.