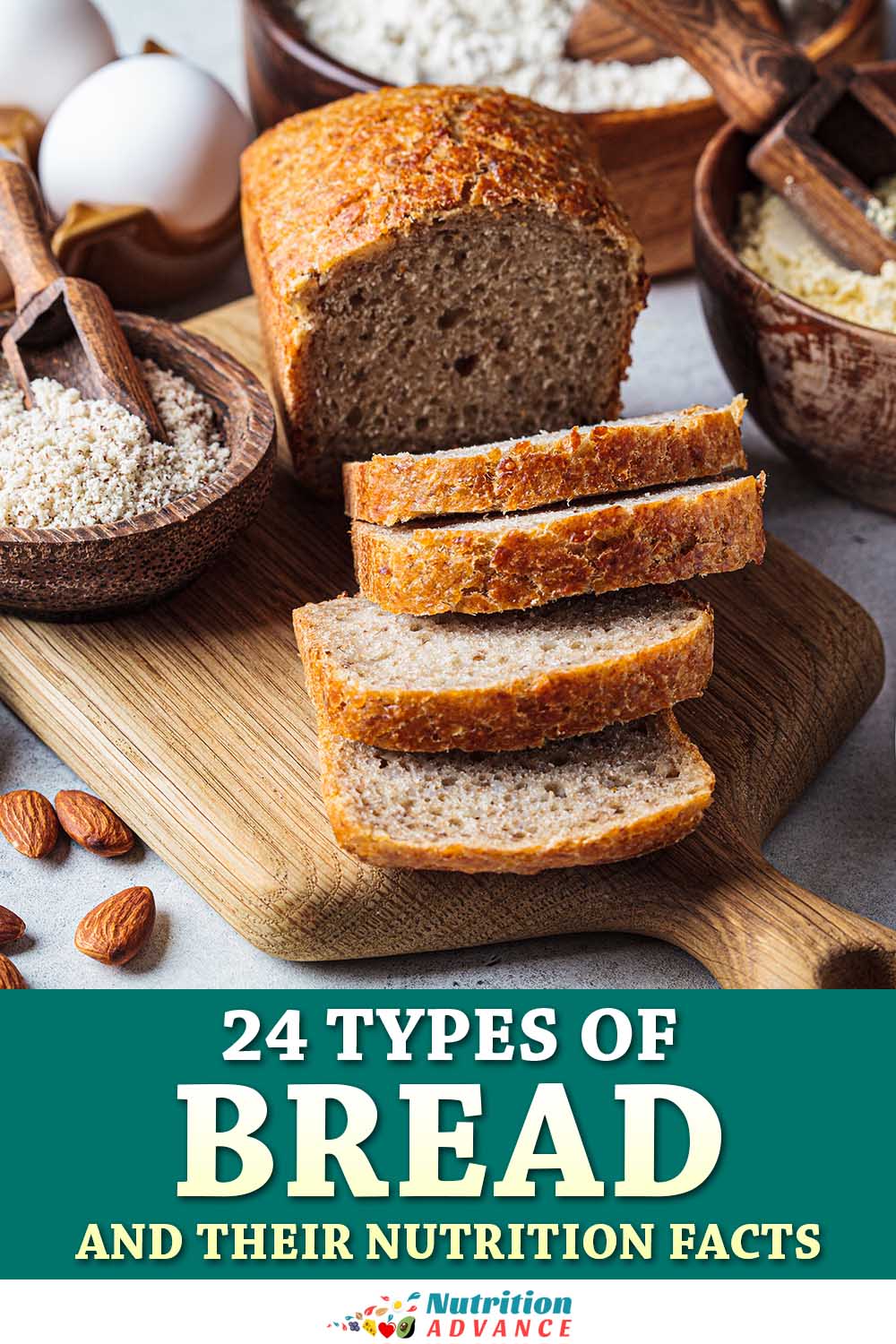 People sometimes refer to bread as ‘the staff of life,’ and it is a staple food in much of the world.

However, bread comes in different shapes and sizes, with vastly different nutritional profiles.

This article looks at the different types of common bread from around the world.

We’ll look at the general characteristics and nutritional properties of each variety.

Unless otherwise stated, the source of all nutritional data is the USDA’s FoodData Central Database.

Almond bread is a type of bread that uses ground almond flour in place of grains.

For this reason, almond bread is particularly popular with low-carb dieters as well as individuals avoiding gluten.

Almond bread is probably just as much a homemade bread as a commercially available product, and many recipes exist online.

The end product has a nutty and slightly sweet flavor with a crumbly texture.

According to the Cronometer Database, a commercially available almond bread (Venerdi) provides the following nutritional values (1):

Also known as ‘French bread,’ the baguette is one of the most famous bread products worldwide.

Baguettes are long, thin sticks of bread made from four ingredients: flour, water, yeast, and salt.

The bread officially became known as ‘baguette’ and increased in popularity approximately 100 years ago, in 1920 (3).

Since the main ingredient is refined wheat flour, baguettes tend to have a mild taste compared to other bread varieties. However, they are pretty low in fiber and protein compared to whole grain bread products.

According to the USDA database, here are the typical nutritional properties of a baguette (4):

Banana bread is a popular type of bread that combines regular flour and ripe bananas in its ingredients. Other ingredients include butter, eggs, baking soda, salt, and (optionally) flavorings.

In the 1930s, banana bread started becoming famous in the United States as recipes were shared (5).

There is even a national ‘banana bread day’ in the United States.

Banana bread has a sweet, banana-filled, and cake-like taste. It is also used more like a cake than a bread product.

According to the USDA Database, here are the typical nutritional values for banana bread (6):

As a result, it offers more fiber, vitamins, and minerals than refined wheat bread.

Barley products have long been part of the human diet, with the ancient Egyptians making them thousands of years ago (7).

Here are the nutritional values of barley bread according to the USDA’s FoodData Central database (8):

Among their various uses, they are particularly popular as burger buns.

The main ingredient is wheat flour. Brioche buns also contain a good amount of butter, milk, and eggs in their ingredients. These ingredients help to give the buns a soft, light texture and a slightly sweet taste.

However, due to the high butter content, brioche bread contains more fat (and more calories) than other kinds of bread.

Here are the basic nutritional values for brioche bread (9):

Ciabatta is a long, flat, and almost rectangular-shaped Italian bread.

Despite its fame and name recognition, it is quite a new type of bread too.

The ciabatta was invented in 1982 to compete with imported French baguettes coming into Italy (10).

While it is possible to find wholewheat varieties, most ciabattas contain a mix of wheat flour, water, yeast, salt, and sometimes olive oil.

Here are the nutritional values for a typical ciabatta (11):

Cornbread is a type of bread typically made from cornmeal and baking powder.

The bread was likely created around 7,000 years ago by Native Americans in Mexico (12).

There are many different types of cornbread and ways of making it, but baked cornbread is the most common.

Once again, refined (corn) flour is the main ingredient in cornbread, which is relatively low in fiber and protein.

Here are the basic nutritional values for a typical cornbread (13):

Crumpets are small bread products that originated in England, likely in the 17th century (14).

A crumpet has a soft and spongy texture and little cratered holes on top that collect any toppings within them.

Generally, people eat crumpets alongside butter, jams, honey, and other condiments. However, some people will eat them with a poached egg on top.

The ingredients used to make a typical crumpet are water, wheat flour, and yeast.

Here are the nutritional properties of a common crumpet (15):

As the name suggests, English muffins are another bread product originating in the United Kingdom.

Based on historical recipes, English muffins appear to have originated in the early years of the 18th century.

English muffins are not entirely different from crumpets, and they are small rounded pieces of bread.

Sometimes people use English muffins as regular bread rolls with fillings inside. They are especially popular when consumed in this way at breakfast time, and a variety of stores sell English muffin breakfast sandwiches.

The table below shows the typical nutritional properties of English muffins (16):

Focaccia is an Italian flatbread that shares a slight resemblance to pizza.

That said, focaccia is thicker than a traditional Italian pizza base. It also tends to have visible air pockets (large bubbles) in the bread/dough.

Interestingly, focaccia is very old, and it has been part of the Italian diet for hundreds of years. It is thought that the origins of focaccia go back 2,000 years (17).

There are many different versions of focaccia, and they vary depending on the region of Italy. However, the primary ingredients of focaccia include wheat flour, water, salt, yeast, and olive oil.

Some focaccia may also have a small number of toppings, with black olives and various herbs being typical.

Here are the basic nutritional properties of plain focaccia (18):

Originating in India and a standard part of many Asian cuisines, naan is a type of flatbread.

Naan bread often accompanies foods such as curries, and the bread comes in many different varieties.

For example, some of the most popular options include:

While wholewheat options are available, the main ingredient of typical naan bread tends to be refined wheat flour. Thus, it is nutritionally similar to other white bread.

Here are the nutritional values for a typical plain naan bread (19):

Pita bread is another popular kind of flatbread.

The bread originates in Greece, but it is popular throughout the Mediterranean region and the Middle East.

Pita bread has a hollow center, so it can be a ‘pocket bread’ with ingredients stuffed inside it.

This hole in the center results from gases released by the yeast during exposure to hot cooking temperatures in the oven.

Since it has a convenient hole in the middle, pita bread is a typical sandwich option for walks, picnics, and other days out.

Here are the nutritional properties of typical pita bread (20):

Pumpernickel is a German bread made from rye.

For this reason, it has a darker color than most other types of bread.

Some pumpernickel recipes may also include whole rye berries (the full rye whole grain) among their ingredients.

Since it is a type of whole grain bread, pumpernickel has a higher fiber content than most bread.

The table below shows the nutritional values of pumpernickel bread, using data from the USDA database (21):

Rice bread is a type of bread often marketed for its gluten-free properties.

Since rice contains no gluten, rice bread should be compatible with gluten-free diets. However, it is always worth checking the label to ensure there is no source of gluten in commercial rice bread.

As the name suggests, rice flour is the main ingredient in rice bread.

According to USDA data, here are the nutritional values for rice bread (22):

Rye bread refers to bread varieties that use rye flour among their ingredients.

However, unlike traditional pumpernickel bread, rye bread may contain other flours.

For instance, the main ingredient of some rye bread may even be wheat flour, with a smaller amount of rye flour.

Generally speaking, rye bread has a more robust flavor and a thicker texture than wheat bread. Rye bread has a long history, and it has been part of human diets for thousands of years.

Here are the typical nutritional characteristics of rye bread (23):

Scones are a popular, round-shaped form of small bread originating in the United Kingdom.

The scone is part of popular ‘afternoon tea’ meals alongside sandwiches and black tea.

Additionally, scones can come in a broad range of flavors, and extra ingredients can include raisins, cinnamon, cheese, and more.

Here are the nutritional values for a typical plain scone (24):

Sourdough bread refers to bread that uses a bacterial starter for fermentation rather than commercial yeast powder.

Aside from this, traditional sourdough bread is usually a combination of three simple ingredients: flour, water, and salt.

The type of flour can vary, with white, brown, wholewheat, rye, spelt, and more all being potential sourdough varieties.

As such, ‘sourdough bread’ has no unique nutritional profile, and it depends on the type of flour used to make it.

Unlike most commercial bread, sourdough has a light but chewy texture and a more flavorful taste.

Spelt bread is a type of whole grain bread made from spelt, an ancient wheat grain cultivated since 9000 BC (25).

Spelt flour is a whole grain flour, containing all parts of the bran, germ, and endosperm of the spelt grains.

For this reason, spelt bread is more nutritious than many other varieties of bread.

Here are the basic nutritional properties of spelt bread, based on data from the Canadian Nutrient File (26):

The English teacake is a type of bread often used as a snack product that people consume toasted, usually with butter.

These teacakes are also known as ‘toasted teacakes,’ and they are very different from American teacakes, which are more like cookies.

Based on data from the Cronometer Database, a typical teacake will provide the following nutritional values (1):

Although more traditional artisanal bread products have become popular recently, there were still 135 million consumers buying white bread in the United States in 2020 (27).

Therefore, white bread is one of the most common sources of refined carbohydrates in the average diet.

Compared to wholegrain varieties of bread, white bread contains none of the wheat germ or bran, both of which are full of essential nutrients. It is also much lower in fiber than wholegrain bread.

The typical usage of white bread is for making sandwiches or toast.

Here are the nutritional values for commercial white bread (28):

Unlike white bread, whole wheat varieties of bread include all of the wheat bran, germ, and endosperm.

Although they have probably been around for much longer, the first recorded waffle recipe was written in the late 1300s in France (30).

In the present time, waffles are a popular food around the world. The typical batter used to make waffles consists of flour, eggs, milk, and butter.

According to USDA data, the average plain waffle has the following nutritional properties (32):

Zwieback is a crunchy, sweetened baked bread that comes in small-sized slices.

This crispy bread product is popular in many European countries, and it originated in Germany.

Zwieback consists of flour, eggs, and sugar. However, its unique point is that it is baked twice. The literal translation of ‘zwieback’ into English is ‘twice baked,’ accurately describing the bread.

Although it has many potential uses, zwieback is often consumed as a snack alongside a hot tea or coffee.

Here are the typical nutritional values for zwieback (33):

This article shows that there are many different kinds of bread and bread products.

Many of these options are mainly a source of refined wheat flour, but some whole grain options offer more nutritional value. In this regard, rye, spelt, and whole wheat bread offer the broadest range of nutrients.

In addition to commercially available bread, it is possible to make homemade bread to fit a wide variety of needs.

These homemade recipes can range from gluten-free to low-carbohydrate options. They can also feature different flours, whether from legumes, nuts, or grains.