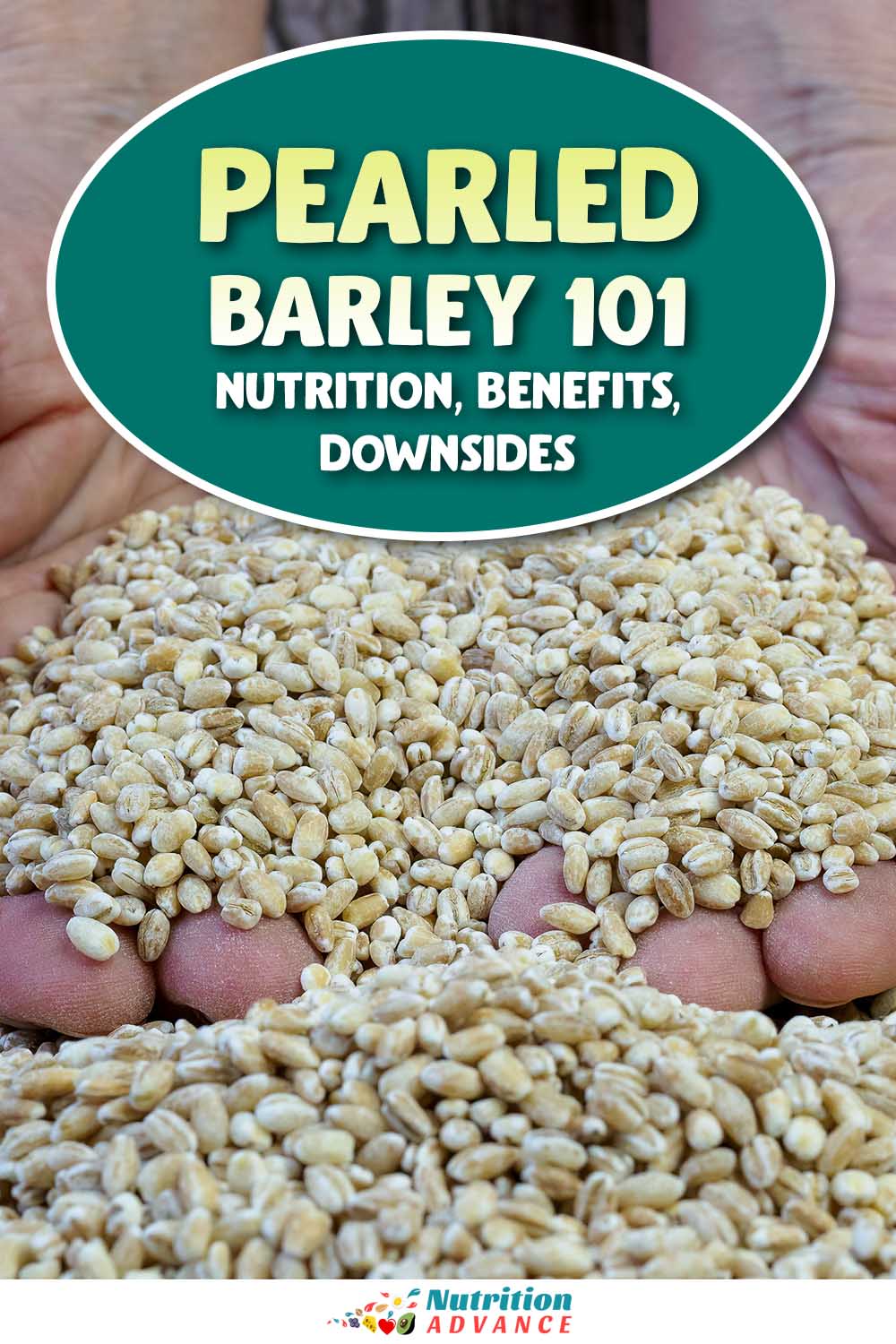 Barley is a type of grain typically used as a food grain, for animal feed, and in the beer-making process.

This popular grain has long been part of human diets, and research suggests it was domesticated around 10,000 years ago (1).

This article provides a complete guide to barley, its nutritional benefits, downsides, uses, and more.

Barley is a cereal grain belonging to the grass family, known scientifically as Hordeum vulgare L (2).

According to the United States Department of Agriculture (USDA), barley has the fourth highest grain production globally after maize, rice, and wheat (2).

Barley is a versatile grain, and it has many uses, including the production of:

Aside from this, people use barley as a food grain for cooking in various recipes.

Key Point: Barley is one of the most popular grains used in human food systems. It has many uses, but it plays a prominent role in animal feed and beer production.

There are two primary forms of barley available for sale: pearled barley (or ‘pearl barley’) and hulled barley.

Only the outer hull (which is inedible) is removed from the barley grains when making hulled barley.

Since hulled barley contains all three parts of the grain—the bran, the germ, and the endosperm, it is a whole grain.

Hulled barley can come in many forms, from whole grain kernels to grits (chopped up pieces), rolled flakes, and flour.

Pearled barley is the most common barley product.

The Whole Grains Council describes pearled barley as “polished, or ‘pearled’ to remove some or all of the outer bran layer along with the hull” (3).

While pearled barley is not technically a “whole grain” in the strict sense of the term, it still contains high amounts of fiber and other nutrients.

Pearled barley is the most common form of barley found on store shelves.

While pearled barley contains slightly fewer nutrients than hulled barley, it still has good nutritional value. Additionally, it has a softer texture and a quicker cooking time.

Like hulled barley, there are also different pearled barley products, including grits, flakes, and flour.

The following table provides the nutritional values for hulled and pearled barley per 100 grams of raw weight.

The source of all nutritional data for barley is the USDA’s FoodData Central nutrition database (4, 5).

Despite this, each form of barley contains similar calories per 100 grams due to pearled barley’s higher total carbohydrate levels.

Pearled and hulled barley have a similar vitamin profile.

However, hulled barley provides slightly higher levels of several B vitamins and vitamin E, whereas pearled barley has more folate.

The table demonstrated that barley contains a good range of essential minerals.

However, hulled barley provides slightly higher levels of most minerals than pearled barley.

These phytonutrients include various flavonoids and phenolic acids, which are types of polyphenols.

As detailed here, there is a lack of research on barley phytonutrients, but they may potentially confer health benefits.

The topic requires further study to develop a better understanding.

Key Point: Barley is primarily a source of carbohydrates and fiber, and it has a moderate protein content. All barley provides a good range of vitamins and minerals, but hulled barley has slightly higher levels than pearled barley.

Here are some of the nutritional benefits that barley can offer.

Barley provides a significant source of fiber, with hulled barley and pearled barley offering 17.3 grams and 15.6 grams of fiber per 100 grams, dry weight (4, 5).

According to the FDA’s daily values, adults should strive to consume the recommended daily value of 28 grams of fiber per day (6).

As we can see, consuming barley would make a significant contribution to daily fiber intake.

Systematic reviews and meta-analyses of large observational trials have demonstrated that higher fiber intake is associated with lower all-cause mortality (7, 8, 9).

For more fiber-rich grains, see this guide to wheat germ

As shown in the ‘nutrition facts’ section, barley provides a broad range of essential nutrients.

While barley has a low to moderate level of most dietary vitamins, the grain provides greater amounts of essential minerals.

Per 100 grams dry weight, barley provides more than 50% of the recommended daily value for the following minerals:

Additionally, 100 grams of barley contains from 10% to 49% of the recommended daily value for these minerals:

There are several different markers of risk for cardiovascular disease (10, 11, 12).

However, all else being equal, higher levels of LDL cholesterol, also known as LDL-C, are strongly associated with higher cardiovascular disease risk (10, 11, 12).

On this note, certain foods can help to lower LDL-C levels. Among these foods, options that contain soluble fiber and polyunsaturated fat have the most significant effect (13, 14).

For instance, a systematic review of accumulated evidence from systematic reviews and meta-analyses of randomized controlled trials examined the effect of foods on LDL-C. This review found a high level of evidence for soluble-fiber-containing foods, such as barley, having a moderate impact on lowering LDL-C (14):

Beta-glucans are a type of soluble fiber found in plants, and barley and oats are two of the most prominent dietary sources.

Key Point: Barley is a rich source of beta-glucans, a type of soluble fiber that has an LDL-lowering effect.

May Help With Satiety and Blood Sugar Control

In a 2014 randomized controlled trial from Japan, researchers investigated if consuming barley-enriched white rice could benefit appetite and energy intake (16).

After this, the participants could consume as much as they wanted during the day’s subsequent lunch and dinner, during which both groups had the same choice of foods.

Additionally, all study participants filled in a questionnaire that queried their subjective feelings of hunger, fullness, and satiety.

From this, scores were calculated, and the results found that the barley group had significantly higher fullness and satiety scores while having a lower hunger score.

As with most foods, barley also has a potential drawback.

Alongside wheat and rye, barley is one of the three main gluten-containing grains (19).

How To Use Barley

Barley is a versatile grain, and we can use it in numerous ways:

For some more ideas, BBC Good Food has a collection of 30 pearl barley recipes.

Barley is a versatile grain that comes in several different forms, all of which offer good nutritional value.

Consuming barley instead of refined grains is a simple way to improve the nutritional qualities of a diet.

Barley may also benefit human health due to its soluble fiber content.