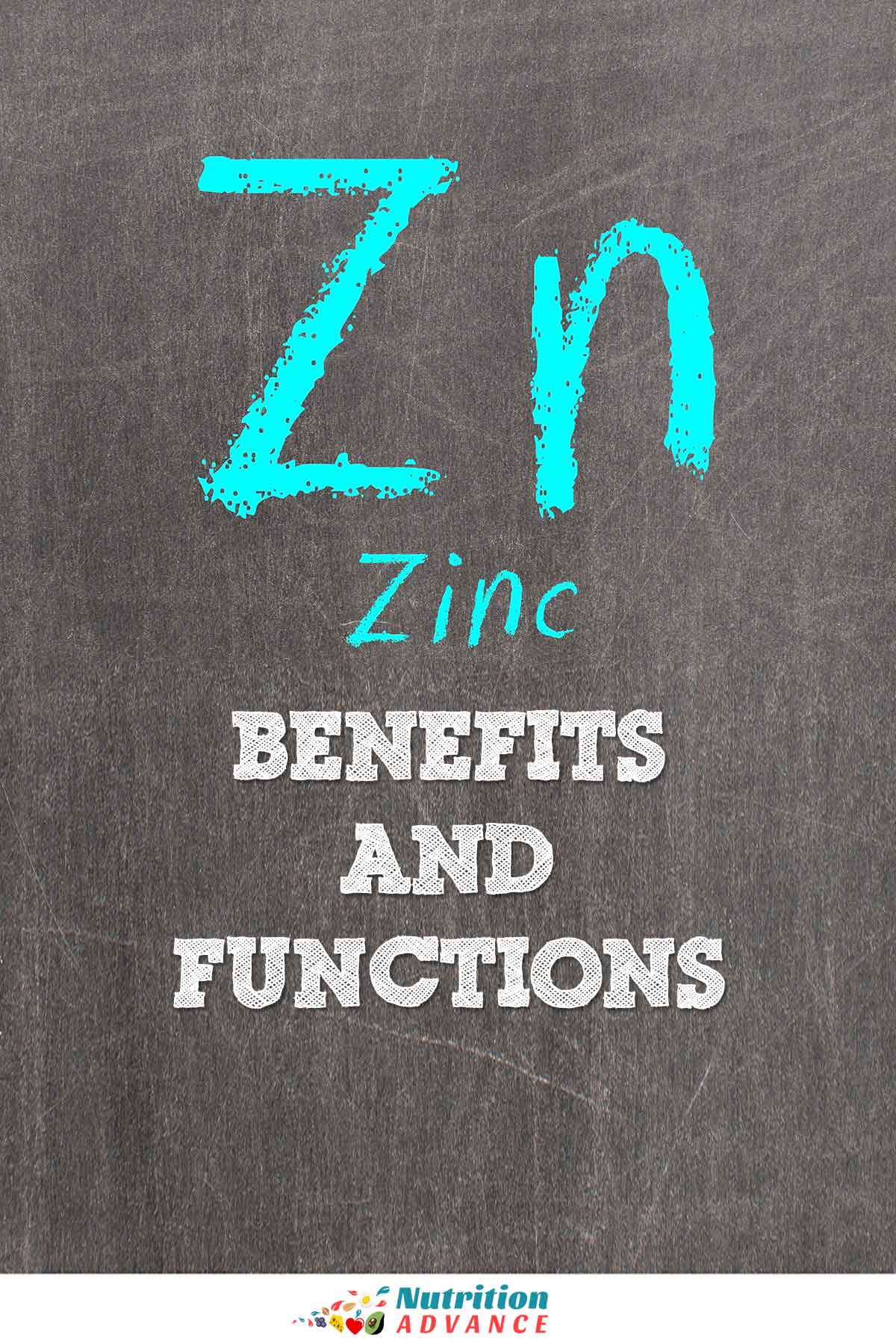 Zinc is a nutritionally essential mineral that has a wide range of roles in the human body.

It is also one of the most widespread deficiencies in the world, with an estimated two billion people around the world having an inadequate intake (1).

In this article, we examine some of the key functions and potential health benefits of zinc. 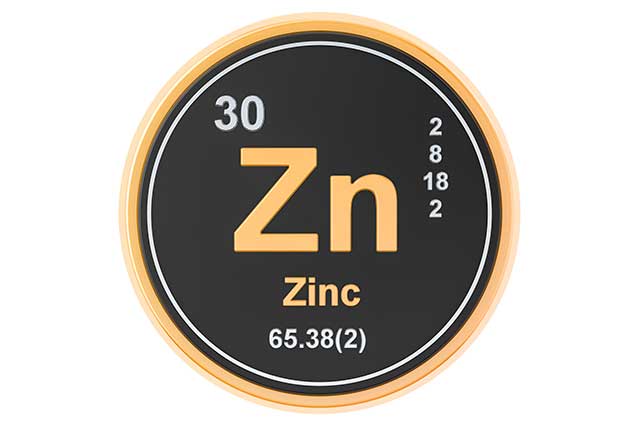 Zinc is a trace mineral, which means that we need to obtain small amounts of it through our diet to remain healthy.

Gaining adequate levels of the mineral is crucial because it affects everything from our immune system to protein and DNA synthesis (2).

As previously mentioned, zinc deficiency is prevalent in the present day. On this note, approximately 17.3% of the global population does not get enough dietary zinc (3).

Although inadequate zinc intake is more widespread in the developing world, it affects developed countries too.

For example, a recent study showed that more than 8% of US adults have insufficient blood levels of zinc (3).

The recommended daily intake levels of zinc depend on age and gender.

In the tables below, you can see the current recommended dietary allowances (4);

Additionally, it is recommended that women under the age of eighteen consume 12 mg of zinc while pregnant and 13 mg if they are breastfeeding. These numbers drop to 11 mg and 12 mg respectively, for women over the age of nineteen.

Key Point: Zinc is a mineral that we need to obtain in sufficient quantities to stay healthy.

Functions, Role in the Body, and Health Benefits

In this next section, we will look at some of the primary functions of zinc and the potential health benefits it may confer.

1) Important For Physical Development and Growth

Zinc plays a key role in growth, and for this reason, it is a vital nutrient for young children.

As a result, researchers believe that an insufficient intake of zinc during key growth phases may stunt growth (8, 9).

Key Point: Zinc is a primary nutrient for growth, so it plays a key role in the physical development of infants.

In addition to the role zinc plays in physical growth, it is also important for maintaining a healthy immune response.

For one thing, the availability of zinc modulates the body’s immune response. Thus, we require sufficient levels of the mineral to achieve optimal immunity and protection against inflammation (10).

How Does Zinc Affect Immune Response?

All in all, there are many different ways through which zinc can increase the immune response.

Firstly, zinc is a cofactor for various antioxidant enzymes such as superoxide dismutase 1 (SOD1). Research shows that a lack of zinc availability increases the production of free radicals, which can cause oxidative stress and inflammation (13).

Another example is how zinc upregulates certain proteins (such as Nrf2), which can increase the production of glutathione, known as the body’s “master antioxidant” (14).

Evidence from animal studies also supports this finding. For instance, supplementing mice with zinc appears to lower their blood glucose and insulin levels (16).

In this study, researchers split more than 200 participants with prediabetes into a treatment group (20 mg zinc daily) and a placebo group. The clinical trial had a duration of 12 months.

The results of the trial found that (17); 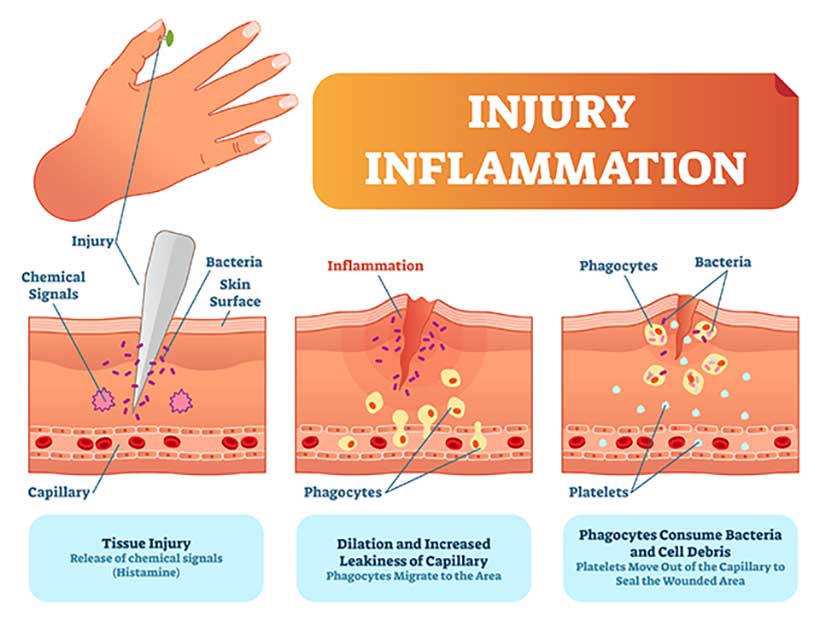 One of the most useful functions of zinc is the role it plays in enabling our body’s wound healing system.

To accomplish this, zinc influences every aspect of the wound healing process, from coagulation and inflammation to the remodeling of tissue and scar formation (18).

For this reason, an inadequate intake of zinc can slow down the wound healing process (19).

On this topic, a randomized, placebo-controlled trial examined the impact of zinc supplementation on wound healing. In this study, 60 patients with diabetic foot ulcers were either given daily zinc supplements or a placebo.

Over the length of the 12-week intervention trial, patients in the zinc group saw “significant reductions” in ulcer size as well as statistically significant falls in fasting blood glucose (20).

Key Point: Zinc plays a critical role in the process of wound healing.

We should not only consider the nutrients we eat, but also the various interactions between different nutrients.

For instance, a deficiency in copper increases the amount of vitamin B5 we need, and selenium and vitamin E share a range of metabolic functions.

These nutrient interactions affect most vitamins and minerals, and zinc is no exception. On the positive side, a higher intake of zinc may increase the relative bioavailability of folate.

For example, an enzyme activated by zinc, known as GTP cyclohydrolase I, plays a vital role in the absorption of dietary folate (21).

Furthermore, a variety of studies show that insufficient zinc levels decrease our ability to absorb and metabolize folate (22).

Adequate levels of zinc are necessary to produce retinal from retinol.

For those unaware, retinol is the most bioavailable form of vitamin A, and we can find it in animal foods such as eggs, liver, and salmon (23).

However, retinal is something entirely different.

Retinal is a form of vitamin A, synthesized from retinol, that plays a crucial role in vision. This conversion from retinol to retinal requires an enzyme that relies on the presence of zinc for activation (23, 24).

A systematic review of randomized trials also found that zinc may be protective against severe age-related macular degeneration. However, the evidence for this is inconsistent, and more research is necessary (25).

Key Point: Zinc is important for the visual system.

7) Zinc Is Important For the Synthesis (and Health) of DNA

Among its many functions, zinc plays a role in the synthesis of DNA (26).

However, it may also have an important role in protecting against DNA deterioration.

Over time, human DNA becomes susceptible to damage from general “wear and tear.”

Poor lifestyle choices and inflammatory processes can damage DNA, and as we age, the body’s response to DNA damage becomes less efficient (27).

In other words, it becomes harder for our body to repair DNA. On the negative side, DNA damage can eventually lead to a host of chronic diseases, and it is particularly associated with cancer (28).

Interestingly, a recent randomized study demonstrated that even small additional amounts of dietary zinc could decrease DNA damage. By increasing daily zinc intake from 6 mg to 10 g in the study participants, the efficiency of DNA repair improved. (29).

Key Point: Zinc may help to protect against DNA damage.

Protein synthesis refers to the generation of new protein molecules within cells.

This process relies on many factors, including enzymes that require zinc for activation (30).

Studies in this area show that when sufficient zinc is not available, the rate of protein synthesis falls (31, 32).

9) May Reduce the Severity of Common Colds and Infections

Since zinc plays a key role in the immune system, it may be capable of helping to fight common illnesses.

On this note, a meta-analysis and systematic review of randomized controlled trials looked into zinc’s potential for treating common colds.

From seventeen randomized studies featuring 2121 participants, zinc appeared to reduce the duration of symptoms from common colds versus placebo (33).

A more recent meta-analysis of seven randomized studies found that using supplementary zinc reduced the duration of the common cold by 33% (34).

Just like all foods and nutrients, zinc may also have some potential side effects in excessive doses.

Here are some issues worth considering.

Going back to the topic of nutrient interactions, large amounts of dietary zinc can impair the proper absorption of copper.

However, it is worth noting that this requires substantial amounts of zinc, purportedly upward of 50 mg per day (35).

It is unlikely that people will consume enough zinc from food to cause problems with copper absorption.

Also, most cases studies show that this side effect occurs in people supplementing zinc or with pre-existing health problems (36, 37).

Unfortunately, a recent study found that a significant proportion of patients prescribed zinc supplements are at risk for copper deficiency. In this study of 70 patients, 62% of them were prescribed large enough amounts of zinc to cause copper deficiency (38).

Some more potential side effects of excessive zinc intake include lethargy, nausea, and general gastrointestinal distress (39, 40).

That said, such effects are rare, and only occur with significant doses of zinc.

For reference, the table below shows the ‘upper tolerable limits’ for zinc. Exceeding these daily levels of zinc intake increase the risk of side effects (41);

Key Point: Exceeding the upper tolerable limits for zinc intake can cause a variety of side effects.

There are many excellent food sources of zinc.

Some of these foods include dairy, meat, seafood, legumes, and seeds.

However, it is worth mentioning that the bioavailability of zinc in these foods can differ.

Generally speaking, animal food sources of zinc are easier to digest and, therefore, more bioavailable. The anti-nutrients present in plant foods, such as phytate, can reduce the mineral’s bioavailability (42).

For a full guide to foods high in the mineral, there is a list of twenty zinc-rich foods here.