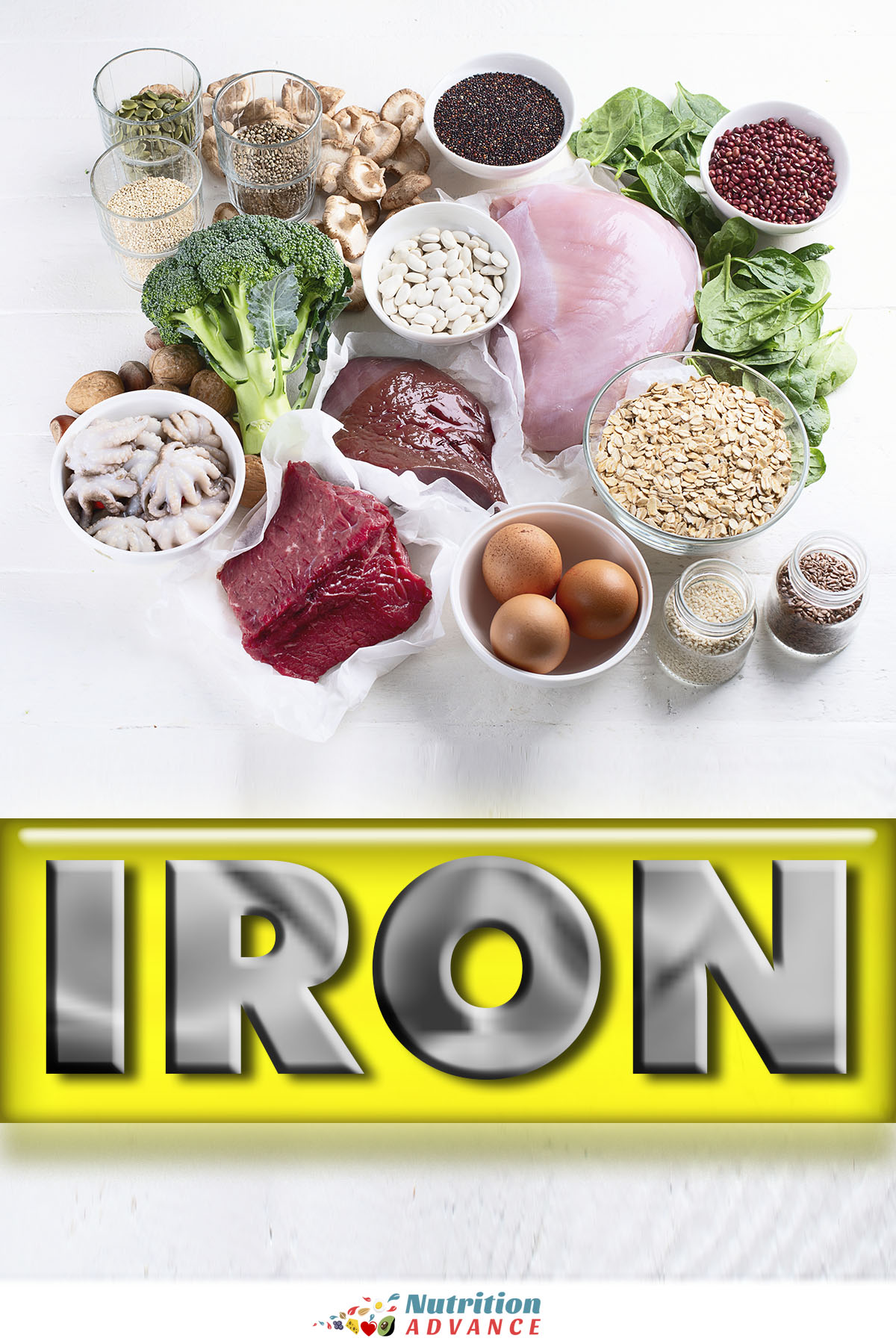 Iron is an essential mineral, but it is also the most common nutrient deficiency in the world today.

Among all minerals, why is this micronutrient so crucial for our health?

In this article, we look at some of the proven health benefits and biological functions of iron. 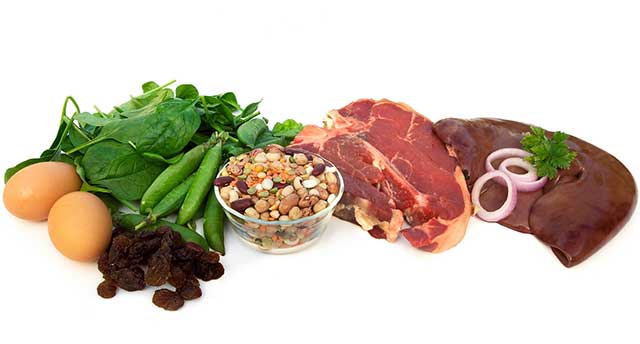 First of all, iron is a mineral that plays a key role in metabolism, growth, development and the transportation of oxygen around the body (1).

The mineral is available in a wide range of foods, and it comes in two forms (2);

Unfortunately, iron deficiency is prevalent throughout the world.

According to the National Health and Nutrition Examination Surveys (NHANES) (3);

Sadly, this is not unique to iron, and many people have inadequate intakes of other beneficial minerals such as zinc and selenium.

Key Point: Iron is an important mineral that plays a crucial role in oxygen transportation. It is available in plant foods as non-heme iron and present in animal foods as heme-iron. 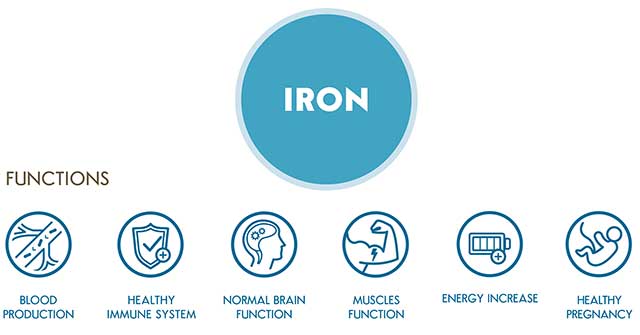 Ensuring sufficient iron intake is important for our health for numerous reasons. Here are some of the benefits and key functions of iron.

1) Iron Helps To Transport Oxygen Around the Body

Iron is present within hemoglobin, which is a protein found within red blood cells.

Firstly, alongside various amino acids, iron is one of the building blocks necessary to produce hemoglobin. Around two-thirds of the body’s iron stores are present within hemoglobin (4, 5).

As part of its biological roles, hemoglobin collects oxygen from the lungs. This oxygen then becomes bound to the iron within hemoglobin, which creates a compound called oxyhemoglobin.

Oxyhemoglobin travels around the body and transports its oxygen stores to body tissues that require it (6).

As a result, hemoglobin may start to fall when iron levels are continuously too low. These lower hemoglobin levels can potentially lead to a wide variety of health problems.

Key Point: Iron is essential for producing hemoglobin and transporting oxygen around the body.

Iron is a cofactor for numerous enzymes that play a role in the central nervous system (7).

As a result, iron is an important factor for the cognitive development of children.

On this note, iron deficiency has links to poor cognitive development and behavioral problems in children (8, 9).

Furthermore, a systematic review found that a higher iron intake has a “modest positive effect” on cognition, motor skills, and coordination in anemic infants (10).

Key Point: Iron is an important mineral for cognitive development in children.

Enzymes called cytochromes are necessary for cellular energy production, and they require iron to function (11).

Studies show that a low intake of dietary iron reduces the concentration of cytochromes and in turn, this lowers energy production (12).

Key Point: Iron has a key involvement in the production of energy.

For example, a systematic review of intervention trials analyzed the effect of iron supplementation in 1170 iron-deficient patients.

The results found that the higher intake of iron led to reduced self-reported fatigue, which correlated with a “significantly increased serum hemoglobin concentration” (13).

5) Iron Is Important For a Healthy Pregnancy

Iron is widely considered to be one of the most crucial nutrients for a healthy pregnancy.

According to the World Health Organization, “deficiencies in iron and folic acid can potentially negatively impact the health of the mother, her pregnancy, as well as fetal development” (15).

This warning is not surprising when we consider the impact iron has on a developing baby.

During pregnancy, iron has a significant impact on the development of the baby’s brain and other organs. Therefore, it is a crucial nutrient for the baby’s neurodevelopment (16, 17).

Key Point: Iron is a vital nutrient during pregnancy, and it has a large influence on fetal development.

Since iron plays a key role in oxygen transport, the mineral is important for aerobic capacity and endurance (18).

On this note, some research suggests that higher iron intake may have a beneficial impact on sports performance (for individuals with existing insufficient iron levels).

For example, in a study on 48 female rowers, individuals with impaired iron status had lower endurance than those with sufficient iron levels (19).

However, it is worth noting that studies which show positive effects of increasing iron levels involve individuals with low iron levels.

In contrast, in athletes with sufficient blood levels of the mineral, increasing iron levels further doesn’t appear to show benefit (22).

As previously mentioned, iron plays a crucial role in the central nervous system.

There is also some evidence that the mineral may have a positive influence on cognitive health in older adults.

For instance, in a large prospective cohort study featuring 1,744 adults over the age of 71, anemia had a strong association with reduced cognitive function (P = 0.0001). Anemia was also strongly predictive of worsening cognition over the following four years (23).

Also, anemia is strongly linked with an increased risk of developing dementia. These associations are statistically significant, and anemia has even been classed as an independent risk factor for dementia (24, 25).

However, a recent systematic review of the evidence on iron and dementia noted that the existing evidence is diverse. The researchers concluded that more research is necessary to fully understand the possible link (26).

8) Iron Is An Important Cofactor For Various Enzymes

Both heme and non-heme iron are required cofactors for the activation of various enzymes.

In other words, these compounds require sufficient amounts of iron to perform their biological role optimally.

The compounds that rely on iron as a cofactor are known as ‘iron enzymes,’ and these compounds include (27);

Key Point: Iron is a necessary cofactor for a wide range of enzymatic reactions.

9) A Sufficient Intake Can Prevent (Or Treat) Anemia 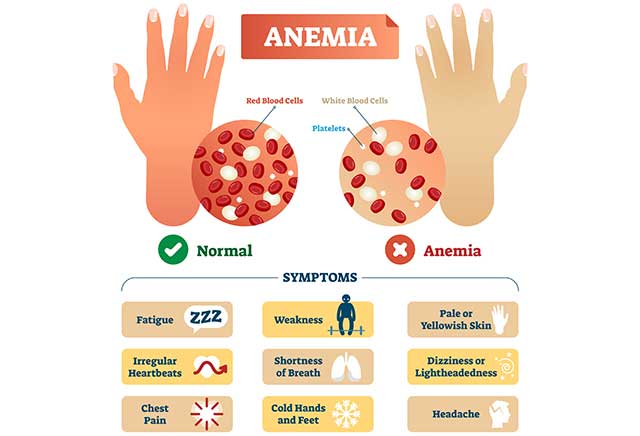 Iron is an essential mineral, and low blood levels of the nutrient can lead to iron deficiency anemia.

Although there are several potential causes of iron deficiency anemia, low dietary intake of iron is the primary cause (28).

What Is the Recommended Iron Intake?

Iron intake recommendations depend on both age and gender.

The following table shows the reference daily intakes (RDI) for the mineral (32);

Note: for pregnant women, the RDI rises to 27 mg, and it then falls to 10 mg for breastfeeding women. Since non-heme iron (in plant foods) has a lower bioavailability, the RDI is 1.8x higher than these figures for vegetarians and vegans.

How To Get More Iron

First of all, anyone who feels they might not have sufficient iron levels should discuss this with their doctor.

However, in the case of iron deficiency, both supplements and iron-rich food sources can have benefits.

Some of the best options include liver, cuttlefish, oysters, and cocoa/dark chocolate.

See this full guide to the top food sources of iron for more information.

Supplementing with iron may also quickly increase levels of iron in the blood (33, 34).

However, supplements can potentially cause side effects including diarrhea and other gastrointestinal issues (35).

It is also possible to have excessively high iron stores, and the mineral can be toxic and cause a range of health problems in excess (36, 37).

For these reasons, whether iron supplementation is necessary should ideally be discussed with a physician.

Iron plays a variety of key roles in human health, and it is a vital mineral for our body.

On the positive side, it is relatively easy for healthy individuals to get enough dietary iron.

Since both animal and plant foods contain this essential mineral, there are also a wide variety of iron-rich food sources.

For more mineral guides, see this article on the benefits of potassium.

1. How do we work out if we are getting enough? Is this this the calculation that has to be done? – If for example duck liver has 31mg of iron per 100g and only 20% of that is adsorbed that means that we get 6.2mg of it at best and maybe at 10% that’s 3.1mg. Therefore, a 20+yo male would need between 150g and 300g of duck liver per day to get enough iron?? 2. Also, the article linked to above citing the top sources of iron states, “Research suggests that heme iron has 15-35% bioavailability depending on the… Read more »

1) The recommended guidelines generally take the rate of absorption into account. For example, since non-heme iron (in plants) has lower bioavailability, the RDIs for vegetarians are 1.8x the standard figures. Of course, the exact amount of iron we all need probably differs from individual to individual, and the only way we can really be sure is by having our levels tested – but this is true for any nutrient.

2) Good spot. The linked article was referencing an older study based on less data, and I have now updated that link.

Thanks. 20g of liver per day is do able.

The article should also discuss those of us who have too much iron……….iron overload. Iron overload is actually quite common in older adults, as humans do not have a good mechanism for ridding the body of excess iron. I had iron overload, and it nearly killed me before I found out what was going on. Donating blood is an easy way to rid the body of excess iron, and that is what I did to alleviate my symptoms. Everyone should have a ferritin blood test done to see what their iron level is. Anything over about 100 is too high.… Read more »

An in-depth look into iron overload is a little outside of the article’s scope, but you do make an important point. The supplement section emphasizes the potential risks of excessive iron levels.