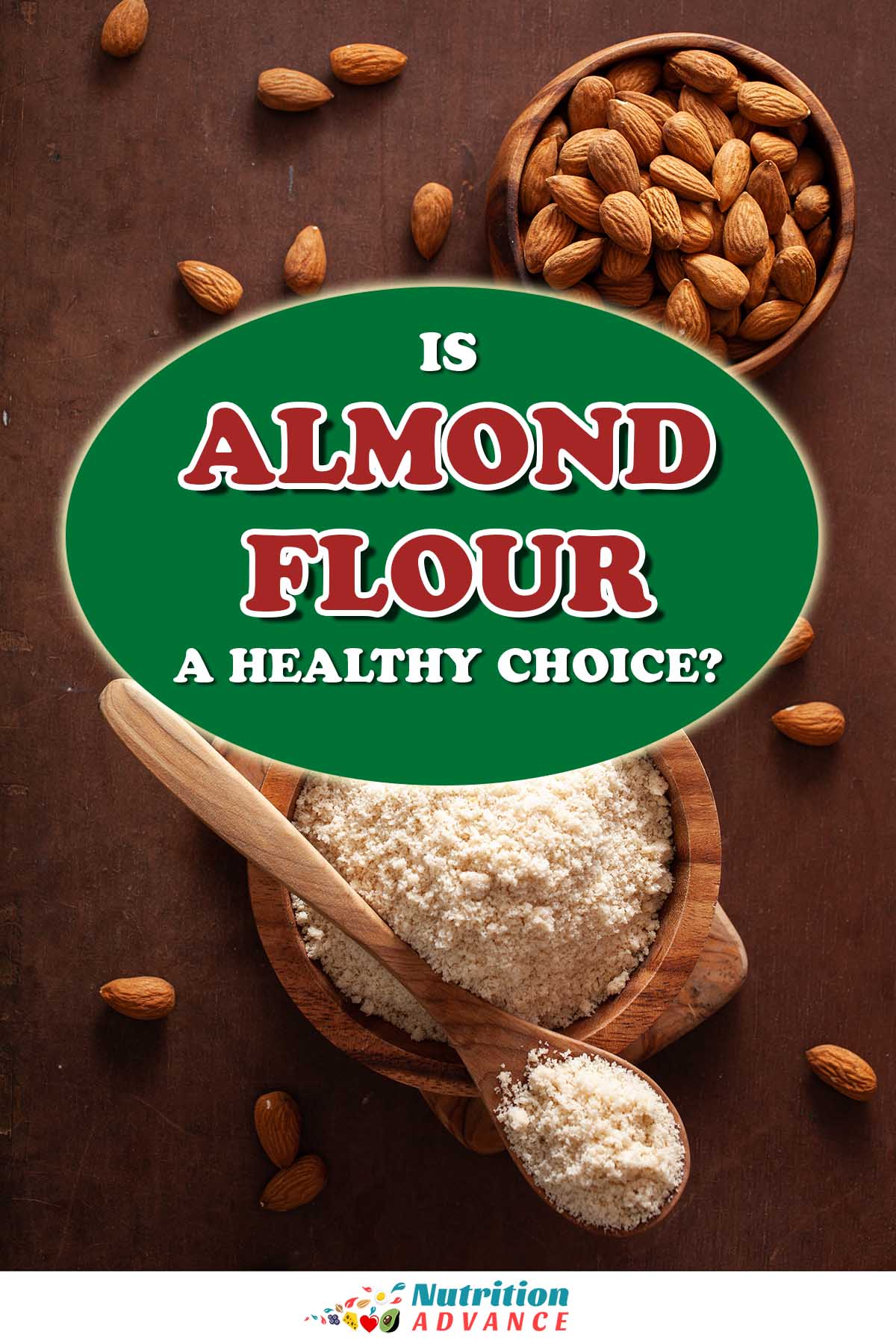 Almond flour is one of the numerous popular flours.

This flour is made from almonds alone, and it is particularly popular with individuals following gluten-free and low-carb diets.

However, what does almond flour offer nutritionally?

This article examines the potential benefits and downsides of almond flour in addition to how it compares to regular wheat flour. 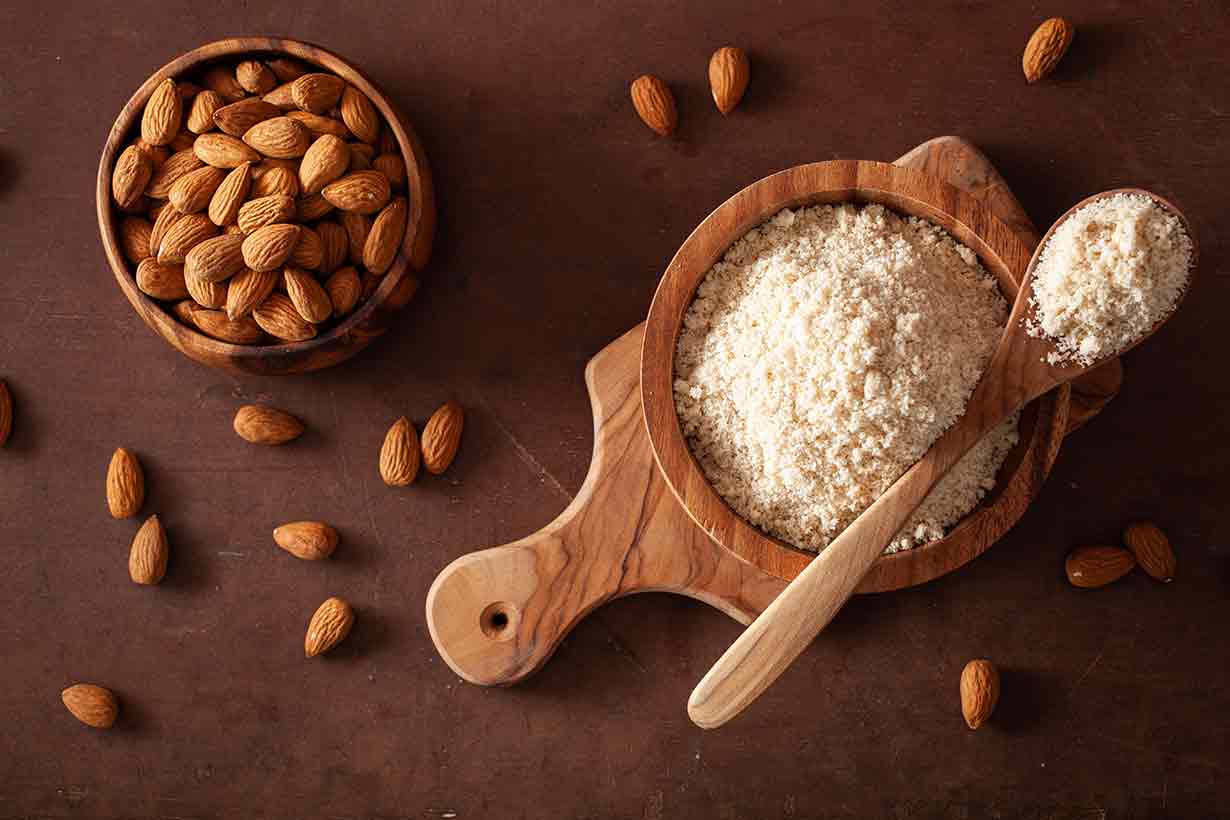 First of all, we will take a look at some of the potential benefits of using almond flour.

Almond flour provides a broad range of beneficial nutrients, and its overall nutritional profile has some advantages over wheat flour.

The flour is produced from blanched almonds, which just means that the skins have been removed from the nuts.

Using data from the USDA’s FoodData Central database, here are the nutritional values for 100 grams (3.5 oz) of almond flour (1).

The daily values for the vitamin and mineral content have been calculated using the FDA’s published daily values (2).

High In Protein and Fiber

The table below shows how much protein and fiber each flour provides on a per-100-gram basis (1, 3):

For those who are trying to increase their fiber intake, coconut flour and lupin flour offer even higher amounts.

Refined grains such as wheat flour have a high glycemic index and can lead to large blood sugar rises compared to minimally processed carbohydrates. This is particularly the case for individuals with insulin resistance or type 2 diabetes (4, 5, 6, 7).

Regular wheat flour contains 72 grams of carbohydrates per 100 grams, and it has minimal fiber content. Furthermore, bread made with white flour has a glycemic index of 75, which is higher than table sugar (3, 8).

In contrast, almond flour provides only 19 grams of carbohydrates per 100 grams, 10 grams of which are fiber. Due to this, the flour should have a minimal impact on blood sugar levels.

For these reasons, almond flour may be a better choice of flour for those who are trying to maintain stable blood sugars.

Key Point: Almond flour has a much lower glycemic index than wheat flour.

Celiac disease is an autoimmune disease characterized by the ingestion of gluten causing damage to the small intestine (12, 13).

Gluten is a specific type of protein found within grains such as wheat and barley, and hence it is present in wheat flour too (14, 15).

Fortunately, there are many gluten-free flours on the market for those who are sensitive to wheat.

Since almonds naturally contain no gluten, almond flour is an appropriate option for gluten-free diets.

Key Point: Almond flour contains no gluten and it is therefore suitable for people with celiac disease.

May Have Benefits For Heart Health

There is very little scientific research on almond flour. However, the flour is made from 100% almonds.

Since research shows that almonds have several potential health benefits, these would also apply to almond flour.

In this regard, a systematic review and meta-analysis of randomized controlled trials found that daily almond intake:

Key Point: Almond flour is made from almonds, and daily intake of these nuts may improve several markers of cardiovascular health.

Almond Flour Is Easy To Use and It Tastes Good

One of the biggest positive points about almond flour is how easy it is to use.

Unlike some other alternative flours, almond flour can generally replace wheat flour in recipes on a one-to-one ratio.

With almond flour, it is almost as simple as following the ingredient quantities in a recipe that calls for regular flour. However, it is probably best to follow some trusted almond flour recipes at first to get a feel for using it.

Overall, almond flour also has an enjoyable taste, and it gives baked goods a soft and chewy texture with a flavorful nutty taste.

Key Point: Almond flour has a pleasant taste and it is relatively easy to use.

Another good benefit of almond flour is that it is incredibly easy to make at home.

To make almond flour simply requires some blanched almonds, a blender or food processor, and a few minutes of time.

It is also possible to make almond meal, which has a coarser texture. Almond meal is made from whole almonds (including their skin) rather than blanched nuts.

To make either of these options, simply blend the almonds until they have a fine and consistent flour-like texture.

As with all foods, there are also some potential downsides to consider about almond flour.

Generally speaking, all varieties of nuts are high in calories.

This energy content is very high compared to regular wheat flour, which has 360 calories per 100 grams (3).

If consuming almond flour-based foods occasionally or as a treat, this may not be something worth worrying about.

However, if it is a daily habit, then almond flour may be leading to excessive energy intake if portion sizes aren’t carefully considered.

Key Point: Gram-for-gram, almond flour is much more energy-dense than other types of flour.

Almonds are true tree nuts, which are one of the big eight food allergens. Since almond flour is made with these nuts, it poses a risk for those with nut allergies.

According to the American Academy of Allergy, Asthma & Immunology, tree nut allergy has a prevalence of approximately 0.5 to 1% in the US population (21).

This risk of allergy is not a consideration with regular flour, and it does limit who can use almond flour or foods made with it.

Another consideration to be aware of is that almonds are very high in oxalate.

Oxalate (also known as oxalic acid) is a compound we can find in certain plant foods. For the majority of people, oxalate passes through the body and is then eliminated without issue.

However, some people—particularly those at risk of developing kidney stones—may potentially experience adverse effects from following a diet high in oxalate (22, 23, 24).

Therefore, almond flour may not be suitable for individuals who have been prescribed a low oxalate diet by their medical team. Notably, research has shown that just eleven almonds provide 122 mg of oxalic acid, and low-oxalate diets are generally considered to provide no more than 100 mg of oxalate per day (25, 26, 27).

Key Point: The majority of people do not need to worry about oxalic acid, but almond flour is unsuitable for individuals following a low oxalate diet.

Unfortunately, this puts almond flour out of reach for many people when much cheaper alternatives are available.

Lastly, another potential downside of almond flour is that it doesn’t offer the same flavor as wheat flour.

While almond flour does taste good, it provides a different and incomparable taste experience.

For anyone wishing to make bread, cakes, cookies, or even a pizza base with a traditional taste, almond flour won’t cut it.

For those who are curious about how to use almond flour, here are some useful recipe resources:

Almond Flour Recipes Everyone Will Love

Almond flour is an excellent source of protein, fiber, vitamins, and minerals.

The flour may also have some added benefits since research shows that almonds may be beneficial for heart health.

For those who enjoy the taste, almond flour is one of the best alternatives to regular wheat flour.

Coconut Flour: Nutritional Benefits, Drawbacks, and How To Use It

What Is Lupin Flour? A High-Protein, Fiber-Rich Flour

17 Types of Nuts: How Do They Compare?