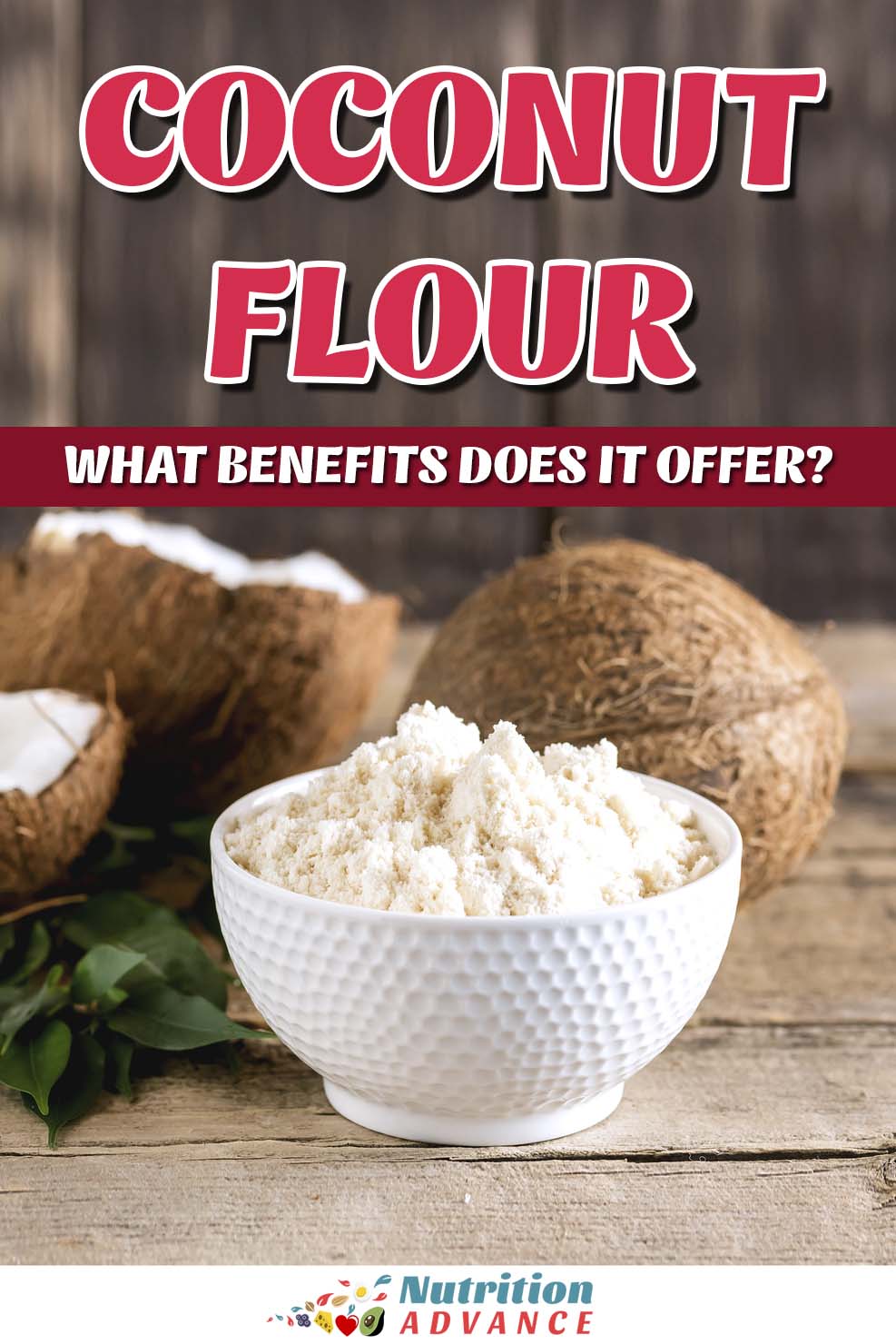 Coconut flour is a high-fiber alternative to wheat flour and it is made from pure coconut meat.

With the popularity of low-carb diets in recent years, the use of coconut flour has risen.

However, what nutrition benefits and drawbacks does coconut flour have?

In this article, we take an in-depth look at coconut flour, how it compares to regular flour, and how to use it. 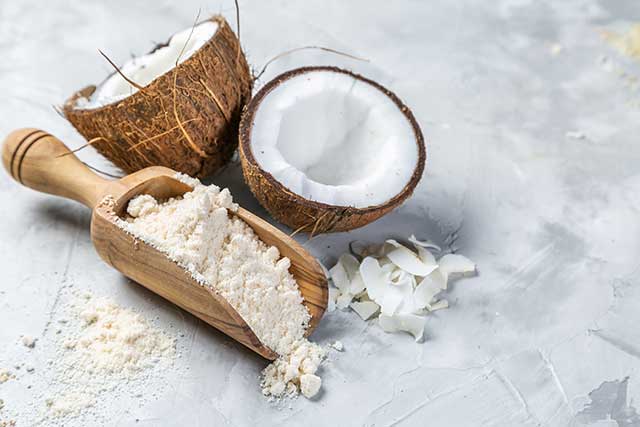 What Is Coconut Flour?

First of all, coconut flour is made from 100% dehydrated coconut meat, and it contains no additional ingredients.

Commercially available coconut flour is a byproduct of the process of making coconut milk.

The production of coconut milk requires soaking the coconut meat in water.

After producing the milk, the leftover pulp is then oven-baked to dehydrate it and then ground into a fine powder.

Coconut flour has the highest fiber content out of any pure flour, and it offers carbohydrates, fat, and protein. It is also gluten-free.

Although there are many different uses for the flour, it is particularly popular with those who enjoy low-carb baking.

Key Point: Coconut flour is a low-carb, high-fiber, and gluten-free form of flour.

Due to its unique composition, coconut flour has several benefits, but it also has some drawbacks.

First of all, here are some of the upsides.

Regular all-purpose wheat flour goes through a refining process that removes most of its nutritional value.

However, coconut flour is pure coconut meat ground into flour, and it is reasonably nutrient-dense.

The following tables show the nutrition facts for coconut flour per cup (112 g) serving, and all nutritional values are from the NCC Nutrient Database.

As shown, coconut flour is primarily a source of carbohydrates, most of which comes from fiber.

It also contains a moderate amount of fat and protein.

2) A Rich Source of Minerals

As we can see in the nutrition facts above, coconut flour is an excellent source of minerals.

Among these minerals, the flour is especially high in copper, magnesium, manganese, and selenium.

Magnesium plays numerous vital roles in the body, yet research shows around half of the US population have a suboptimal intake (1).

Additionally, copper and selenium are essential minerals that, among other functions, have a primary role in the immune system (2, 3).

3) High In Fiber and Low In “Net” Carbohydrate

Coconut flour is one of the most fiber-rich flours available.

For instance, the table below shows how coconut flour compares to wheat flour and almond flour for fiber content per 100g serving (4, 5);

The fiber content of food can help to slow the digestion of the carbohydrates into glucose, thereby lowering postprandial (after meal) blood sugar levels (6).

For this reason, coconut flour is a better alternative to wheat flour for individuals trying to maintain stable blood sugar levels.

However, for those who are looking for the highest-fiber flour, lupin flour may be worth a look.

Due to coconut flour’s high fiber content and the lower amount of digestible “net” carbohydrate, it should have a lower glycemic index than wheat flour.

The glycemic index is a method of rating foods on a scale of 1-100 based on the impact they have on blood glucose levels.

In other words; the higher the glycemic index of a food is, the more significant the effect that food will have on blood sugars.

Regular wheat flour has a very high glycemic index of 71, which is even higher than table sugar (7).

For instance, macaroons and carrot cake made with coconut flour have a glycemic index of only 45 and 51, respectively (8).

Key Point: Coconut flour is high in fiber and contains little digestible carbohydrate. For this reason, it has a lower glycemic response than regular flour.

4) May Have Cardiovascular Benefits

Interestingly, research demonstrates that coconut fiber has a beneficial effect on several markers of cardiovascular risk.

For example, in one study, twenty-one participants supplemented their diet with coconut flakes for two weeks. At the end of the trial period, all participants had experienced significant reductions in triglyceride and LDL cholesterol levels (9).

Additionally, there were no changes to the HDL levels of the participants in the study.

Therefore, supplementing with coconut fiber reduced triglycerides and the ratio of non-HDL to HDL cholesterol, both of which are thought to reduce cardiovascular risk (10, 11).

Coconut flour is a rich source of coconut fiber and provides around 36 grams of fiber per 100 grams.

Key Point: The fiber in coconut flour may have benefits for cardiovascular health.

5) A Rich Source of Lauric Acid

Lauric acid is also known as dodecanoic acid, and it is a medium-chain triglyceride (MCT) (13).

Although lauric acid raises total cholesterol levels, it has a much more significant effect on raising HDL levels.

As a result, this may reduce the ratio of non-HDL to HDL cholesterol, which is associated with reduced cardiovascular risk (10).

Further to this, lauric acid is a precursor to a chemical compound called monolaurin, which it converts to inside the body.

Studies show that monolaurin has a variety of potential benefits, including anti-viral and anti-bacterial properties (14, 15).

That said, there are currently no clinical studies that show the effective dose of monolaurin in humans. Based on animal studies, it appears that the necessary amounts would be higher than what we can realistically get from coconut flour (16).

Key Point: Lauric acid is the main fatty acid in coconut flour, and it may have some potential benefits. 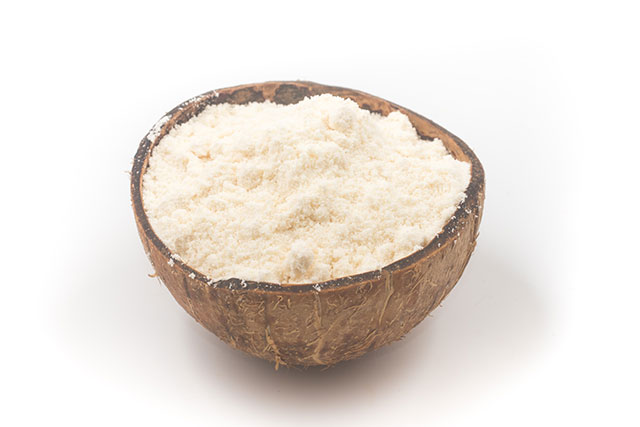 Gluten is a group of proteins found in wheat and other grains, and they cause an immune reaction in people with celiac disease. According to data, celiac disease affects approximately 0.5% to 1% of the world’s population (17).

Additionally, some individuals have non-celiac gluten sensitivity (NCGS). These people experience a range of symptoms after consuming gluten-containing foods.

These symptoms are primarily gastrointestinal, and they can include abdominal pain, bloating, cramps, and reflux. However, extraintestinal symptoms may also occur, such as headache, mind fog, fatigue, and muscle and joint pain (18, 19).

Since coconut flour is gluten-free and grain-free, the flour should not cause issues for individuals with celiac disease or NCGS.

See this guide to almond flour for another popular gluten-free option.

Key Point: Individuals with gluten sensitivities should be able to use coconut flour without any problems.

As previously mentioned, coconut flour has several potential downsides that are worthy of consideration.

Salicylates are a range of chemical compounds that naturally occur in various plant foods.

Coconut is one of the most concentrated sources of these compounds, and coconut flour, made from pure coconut meat, is thereby also high in salicylates (20).

Moderate salicylate intake is not an issue for most people, but some individuals suffer from salicylate intolerance/sensitivity (21, 22).

For such people, salicylate-containing foods may cause various gastrointestinal and respiratory symptoms.

People who are sensitive to salicylates should discuss the issue with their doctor/dietitian before using coconut flour.

2) Coconut Flour Has a Drying Effect

Compared to regular wheat flour, coconut flour soaks up much larger amounts of liquid and has a drying effect on food.

For this reason, it is not a replacement for wheat flour at a 1:1 ratio or the end product would be far too dry.

In the next section, we will look at how to use the flour and the required amounts.

Another disadvantage of using coconut flour is that it sells for a significantly higher price than regular flour.

Gram-for-gram, it can be anywhere from five to ten times more expensive than wheat flour.

This expense could be an issue for those who use large amounts of flour.

Key Point: Coconut flour has some downsides; it is high in salicylates, it is not a like-for-like wheat flour replacement, and it can be very expensive.

How To Use Coconut Flour

Since coconut flour absorbs much larger amounts of liquid than regular wheat flour, we cannot use it as a replacement in a 1:1 ratio.

Generally speaking, the majority of recipe developers recommend using only 1/4 cup of coconut flour per cup of wheat flour.

In other words; if a recipe calls for two cups of wheat flour, you would only need half a cup of coconut flour.

Additionally, increasing the number of eggs is also important.

According to Nourished Kitchen, a respected recipe site, it is best to use one egg per 1/4 cup of coconut flour.

For those who are unsure of precisely how to use the flour, there is an excellent resource here that features more than 100 coconut flour recipes.

In short, coconut flour offers a good source of minerals, large amounts of coconut fiber, and it has a much smaller impact on blood sugar levels than refined grain flours.

Also, since it is gluten-free, it provides a decent option for those who are unable to consume gluten-containing flours.

Unfortunately, the biggest downside for these benefits is the price, which tends to be on the higher side.

All in all, coconut flour is a relatively nutritious option for baking purposes.

Almond Flour: the Benefits and the Downsides

What Is Lupin Flour? A High-Protein, Fiber-Rich Flour