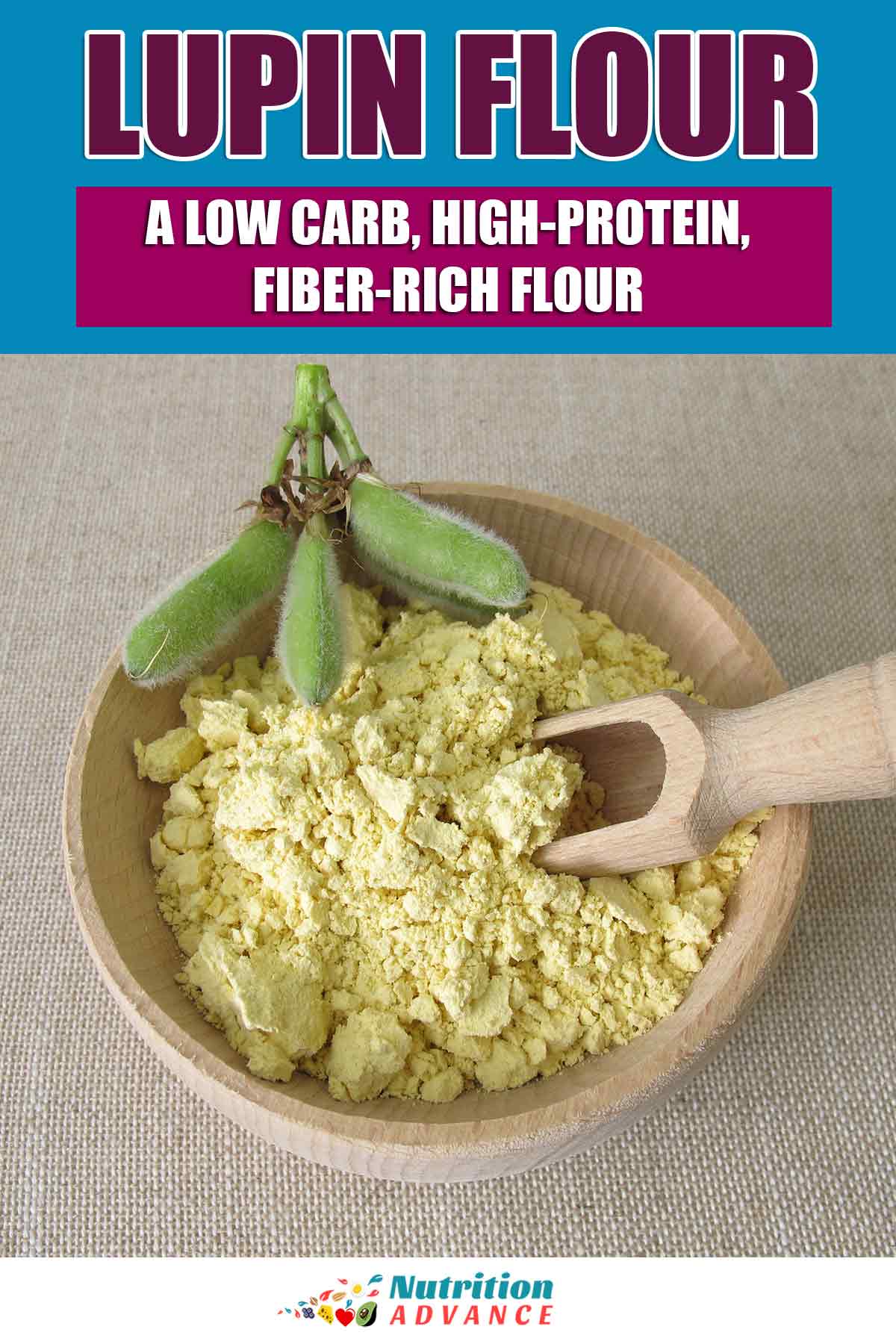 Lupin flour is a type of flour made from a legume called the sweet lupin bean.

This flour has an interesting nutrition profile, and it is low in carbohydrate, high in protein, and rich in fiber.

This article explains what lupin flour is, its potential benefits and drawbacks, and how to use it.

What is lupin flour? 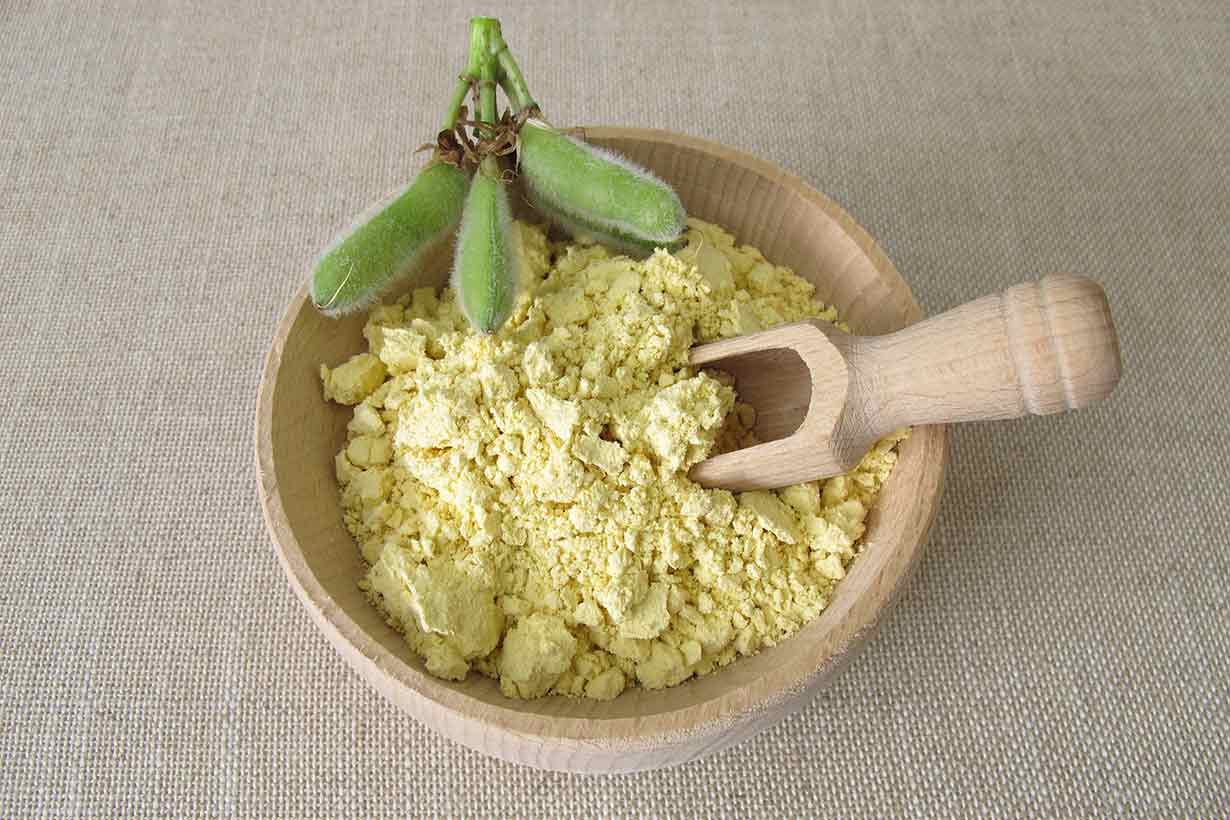 Lupin flour is made by grinding whole sweet lupin beans into powder, and the product contains no additional ingredients.

Due to its nutritional profile, lupin flour has gained popularity with people following specific diets.

For example, the majority of the carbohydrates in lupin flour come from fiber, and the product contains almost no starch.

As a result, it is a popular low-carb flour with individuals following low-carb and ketogenic diets.

Additionally, lupin flour is approximately 40% protein by weight. This protein density makes lupin flour one of the most significant plant-based sources of protein. Therefore, using it is a simple way to increase the protein content of vegetarian and vegan diets.

Key Point: Lupin flour comes from the sweet lupin bean and it is low-carb, high in fiber, and protein-rich flour.

Does lupin flour have any benefits?

Interestingly, there have been numerous scientific studies on the potential benefits of lupin flour.

Here is a summary of the existing scientific research.

A randomized controlled trial looked into the effect of substituting lupin flour for wheat flour in bread. In this trial, 37 participants consumed bread made with lupin flour daily for 16 weeks, while 37 participants ate regular wheat bread over the same timeframe (2).

Following the study period, the participants in the lupin bread intervention group had significantly reduced blood pressure readings compared to the control group:

The researchers concluded that these effects were likely due to the increased protein and fiber content of the lupin flour bread.

However, there is also one study that had conflicting results.

This study was a randomized controlled trial in participants with type 2 diabetes. Participants in the study were randomly placed into two groups (4):

During the study, there were no significant differences in blood pressure changes between these two groups.

Key Point: Depending on the food being replaced, lupin flour may potentially slightly lower blood pressure, but results are mixed.

Several studies have also looked into lupin flour as a potential tool for helping to control satiety levels.

Satiety refers to the feeling of being satisfied after eating a meal – being full and not craving any further food.

The first of these studies demonstrated that participants eating the lupin flour bread reported significantly higher levels of satiety and lowered subsequent energy intake than the white bread group (5).

The second study showed that the participants eating the lupin bread meal had significantly lower concentrations of plasma ghrelin three hours after eating. Ghrelin is known as a “hunger hormone” that stimulates appetite and encourages feeding (5, 6).

As a substantial source of fiber, lupin flour has been theorized to have the same positive effect on circulating LDL cholesterol levels. In a study using hamsters, diets high in lupin significantly reduced levels of total and non-HDL cholesterol (11).

However, we need to look toward human studies to gain the best possible idea of the effect of lupin in humans. On this note, there have been several studies that looked at the impact of lupin protein supplementation on the lipid (cholesterol) profile.

Furthermore, a similar study showed that 25 grams of lupin protein per day resulted in a significant reduction in LDL cholesterol levels after four weeks. However, this effect was no longer visible after eight weeks of the trial. The researchers believe this was due to failing compliance with the study, as participants showed much higher amino acid (protein) levels in the blood at four weeks compared to eight weeks (13).

Several studies have demonstrated that lupin flour may help to reduce the blood glucose response to carbohydrates.

For instance, a randomized controlled trial showed that adding approximately 50 grams of lupin flour to a carbohydrate-rich drink significantly lowered both the glucose and insulin response (14).

A further human trial found that adding 0.94 g of lupin flour per kg of body weight to a meat-based spaghetti dish significantly lowered the blood sugar response compared to the control (15).

The most popular use of lupin flour is for baking, and it can be used to make a wide variety of baked foods.

For example, just some of the foods we can use lupin flour to make include:

However, it is worth noting that the proteins in lupin flour give low elasticity compared to gluten-containing flours (16).

Additionally, the flour has a clear earthy flavor that makes it into the final product.

For these reasons, lupin flour is usually used alongside another type of flour for baking purposes.

In this regard, lupin flour can be combined with regular flour or other options such as coconut flour or almond flour.

That said, it is also possible to use the flour alone.

For those who are interested in a sample recipe, there are plenty of good recipes available online. One of the most popular is this recipe for bread rolls.

Are there any concerns about lupin flour?

Despite the potential benefits of lupin, there is also a serious potential concern to consider: allergy.

As the popularity of lupin products grows, the prevalence of allergic reactions to lupin is increasing. In fact, a recent article published in the Annals of Allergy, Asthma & Immunology referred to lupin as a newly emerging food allergen (17, 18).

As a type of legume, lupin allergy is thought to be similar to peanut allergy. There is also a certain degree of cross-reactivity between lupin and peanuts, so individuals with a peanut allergy may have a higher risk of experiencing allergic reactions to lupin (19).

According to a recent randomized controlled study, a “small but significant number” (at least 4%) of children with peanut allergy were also allergic to lupin (20).

Key Point: Lupin is an emerging major cause of allergy and there may be some cross-reactivity with people who are allergic to peanuts.

While lupin flour is much more nutritious than regular white flour, it may not be the right fit for everyone.

However, for those who enjoy the taste, it is an excellent way to get more fiber and protein into the diet.

Depending on the overall diet, lupin flour may also have some potential health benefits.

Coconut Flour: Nutrition Benefits, Drawbacks, and How To Use It

Almond Flour: the Benefits and Downsides