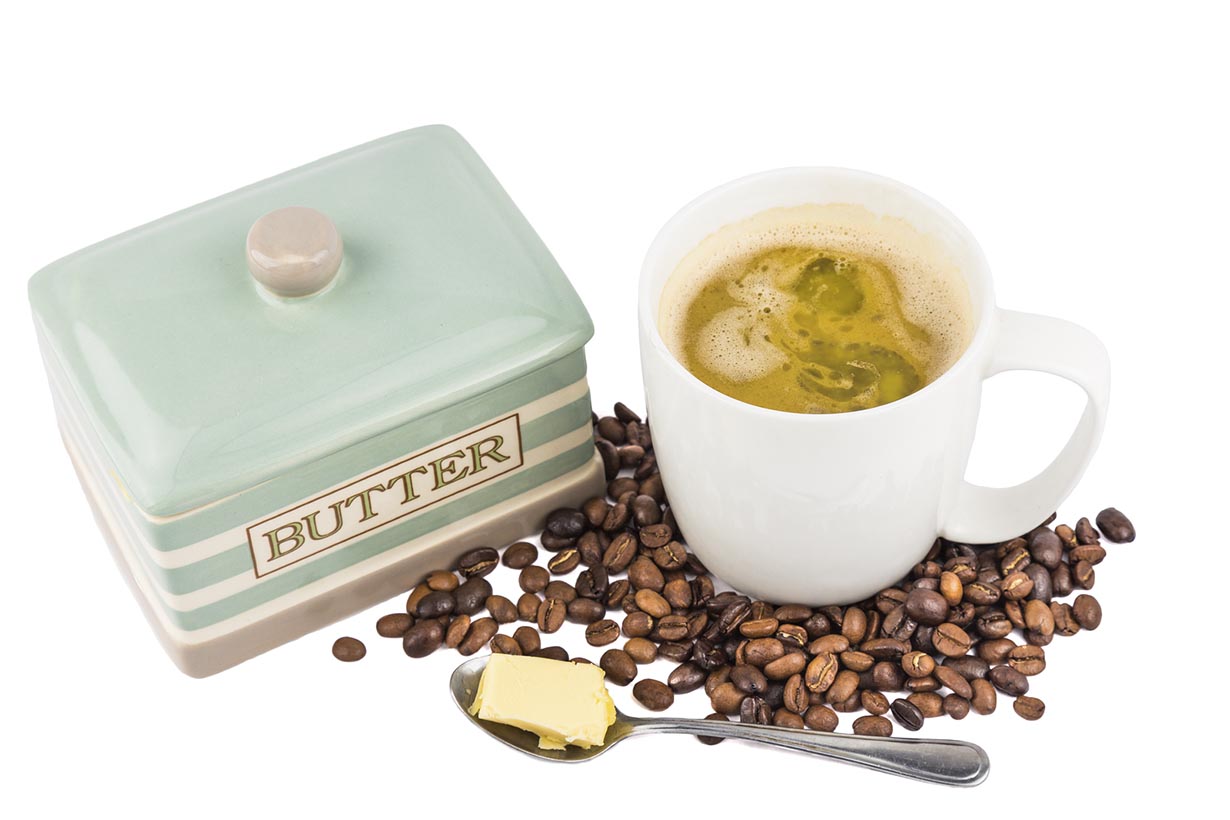 Bulletproof coffee first hit the scenes in 2009 and since that time has grown beyond recognition.

From one man blogging about putting butter in coffee to a national chain, the rise has been immense.

But as with many things, there are two sides to every story.

This article will take a look at this popular coffee drink and whether or not it really is ‘bulletproof.’

What is Bulletproof Coffee?

At its most basic, Bulletproof Coffee is simply coffee with added butter and medium chain triglycerides (MCTs).

Developed by Dave Asprey, a man known as the ‘bulletproof exec,’ the drink first came to fame in 2009 when Dave shared his recipe with the world.

He probably did not expect the wild success since then, but the drink has become a national hit in America.

In fact, recently, Bulletproof Coffee cafes became a reality and are now a nationwide chain in the United States.

There are also different variants of the drink, with some people using coconut oil in their morning coffee, and others using only butter.

As the drink contains only fat and no carbohydrates, it is understandably one of the most popular keto drinks and is sometimes known as ‘ketogenic coffee’ (or ‘keto coffee’ for short).

It is also popular with proponents of paleo and low-carb diets.

So, Why Put Butter in Coffee?

The stated purpose of Bulletproof Coffee is to provide clean, fast energy with no crash.

For example, proponents claim that Bulletproof Coffee will provide sustained energy with no sugar crash due to its “high quality” fat content.

Because the drink is fairly calorie-dense, people often view it as a replacement for a traditional breakfast.

Key Point: Bulletproof Coffee is a coffee drink with large amounts of butter in it. Proponents claim the drink gives long-lasting energy.

Here are the ingredients in the standard recipe for Bulletproof Coffee (1):

There is a lot of emphasis on putting grass-fed butter in the coffee, as it is claimed by proponents that grass-fed animals produce butter with a healthier nutrient profile.

While there can be some differences, it is worth noting that these nutritional differences are relatively minor.

What is MCT oil?

MCT oil is a type of fat typically made from certain fatty acids in coconut and palm oil (2).

Also, MCTs are safe to consume, and much easier to digest than other forms of fat as they don’t require bile salts for digestion (3).

However, many people making Bulletproof Coffee use coconut oil rather than MCT oil, due to the lower price.

How to Make Bulletproof Coffee

Putting butter in your coffee can either taste okay or terrible.

It all depends on how you make it, so you want to ensure that the butter thoroughly blends into the coffee.

Here is the process in four simple steps:

It’s a bit more time-consuming than brewing a regular coffee, and worlds apart from making a cup of instant coffee.

Key Point: The drink uses coffee, grass-fed butter and MCT oil. However, make sure to blend it properly – it doesn’t taste good if there’s an ‘oil slick’ of butter on the top.

So, what does the nutritional profile of buttered coffee look like?

For some quick basics:

As we can see, the recipe contains zero carbohydrates, virtually no protein, and a significant amount of dietary fat.

There is also a total of 328 calories in the drink.

In the first place, we can see that the standout nutrients are vitamin A and riboflavin (otherwise known as vitamin B2).

Aside from this, there are not any other nutrients in significant quantities.

Key Point: The amount of vitamins and minerals in Bulletproof Coffee is not so impressive. The main point of the drink is to get energy from the large amounts of dietary fat.

Butter in Coffee: The Benefits

Bulletproof Coffee would not be so popular if people experienced no benefits.

Specifically, most people replacing a typical breakfast with a cup of Bulletproof Coffee are probably seeing some degree of weight loss. While the company may claim their “high-quality” ingredients cause this, the more accurate reason would be reduced energy intake.

For instance, replacing cereal, pancakes, or cooked breakfast and orange juice with one cup of Bulletproof Coffee would significantly lower calorie intake at breakfast.

Another potential benefit is that there are significant amounts of polyphenols in coffee, which by definition means the same is true of Bulletproof coffee.

Polyphenols are a class of phytonutrient, bioactive compounds found in plant foods (4, 5).

In fact, coffee is the biggest source of polyphenols in the average American diet (6).

Studies show that the polyphenols found in coffee could have several potential benefits, including a reduced risk of various chronic diseases (7, 8, 9).

Despite all the proponents making positive claims about Bulletproof Coffee, some genuine drawbacks exist.

Perhaps the most important downside of Bulletproof Coffee is that the drink displaces more nutritious food.

For instance, instead of consuming 328 calories of butter and oil, you could instead consume two large eggs and half an avocado for only 303 calories (10, 11).

Likewise, porridge made with 50 grams of oats and a cup of milk would have a calorie content of approximately 343 calories (12, 13).

Bulletproof Coffee is popular among people following a low-carb diet, so how does it compare to a small low-carb cooked breakfast?

A breakfast of three eggs and an avocado is another small breakfast option that is extremely low in digestible carbohydrates.

Remember the nutritional profile we saw earlier? OK, now compare that to the nutrients that three eggs and an avocado offer:

Here are the amounts of carbohydrates, fat, and protein in three eggs and an avocado:

As shown above, this breakfast is high in (mainly monounsaturated) fat.

There is also a small amount of carbohydrates, the vast majority of which are from dietary fiber.

Lastly, there is a relatively decent amount of protein: 21.5g.

Here is the vitamin and mineral content in three eggs and an avocado:

As the data shows, this breakfast offers an excellent source of vitamins A, C, E, K, and B vitamins, iron, magnesium, phosphorus, potassium, zinc, copper, manganese, and selenium.

Food vs. Butter in Coffee

When it comes down to it, there is only one winner concerning nutritional profile: real food.

Compared to eggs and avocado, porridge, muesli, or even fish, bacon, meat or any other breakfast food — consuming butter and oil in your coffee comes nowhere close nutritionally.

If one enjoys it, then there is no real issue with drinking a cup of Bulletproof Coffee from time to time instead of a meal.

However, if the drink regularly displaces more nutritious food, then that is a net negative, nutritionally.

As we saw in the earlier nutritional data for Bulletproof Coffee, the drink contains a large amount (28.3 grams) of saturated fat.

Bulletproof Coffee is a combination of coffee, butter, and oil.

While some proponents claim the drinks helps weight loss and provides energy, there is no research of note on Bulletproof Coffee.

However, there are some large drawbacks in regard to its lack of nutritional value and high saturated fat content.

Providing someone tolerates coffee well, the drink is probably fine to drink from time to time.

But it shouldn’t replace a healthier, nutritious, breakfast.

10 thoughts on “Butter in Coffee: Is it Really Bulletproof?”