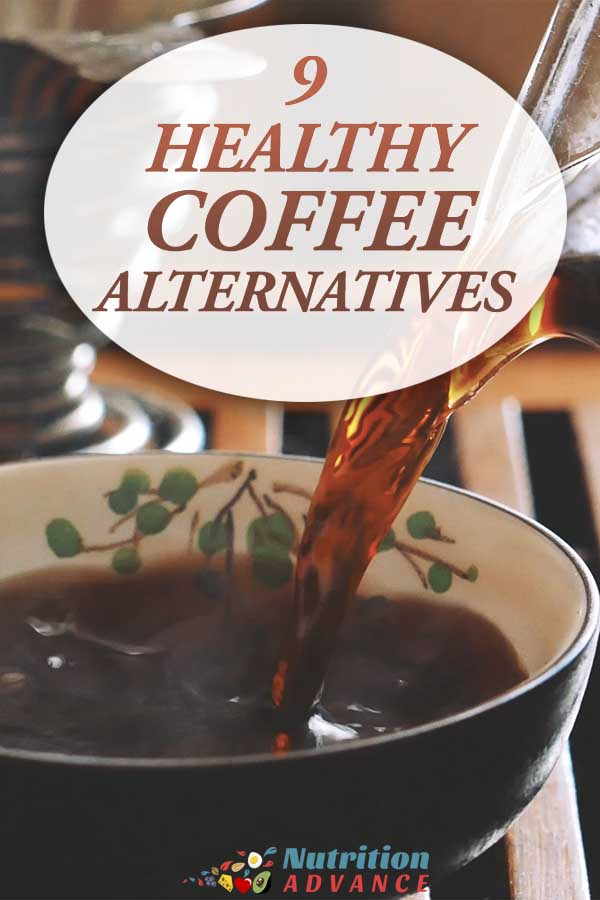 Coffee is delicious and it can have various health benefits too.

However, it is not for everyone, and some people do not do well with caffeine.

Some potential side effects include issues such as anxiety, “jitters” and digestive discomfort.

On the other hand, other people may just want to try something different and find a new drink to enjoy.

This article presents nine healthy coffee alternatives; some of them contain caffeine, and others are caffeine-free.

Firstly, let’s take a look at replacement ideas that do contain caffeine.

Yerba mate is a refreshing tea that is native to South and Central regions of America.

This drink mainly grows in Argentina, and notably, it contains almost as much caffeine as regular coffee.

While a regular cup of coffee contains approximately 95 mg caffeine, yerba mate offers a very close 85 mg. As a result, yerba mate could be a good choice for those who like their morning coffee for extra focus. (1, 2).

Yerba mate has a dark brown color similar to coffee and black tea. Regarding appearance, it is somewhere between the two. The drink contains a large number of polyphenols from which it derives a slightly bitter taste, and it also has a unique toasted/smoky flavor.

According to recent studies, yerba mate appears to have a few interesting benefits.

One of these benefits may be a slight increase in weight loss with regular consumption, potentially from a combination of its chlorogenic acid and caffeine content.

In a randomized and controlled double-blind trial, participants using yerba mate over a 12-week period lost a “clinically significant” greater amount of weight than placebo (3).

Key Point: Yerba mate is a traditional South American drink, and it is a good caffeinated substitute for coffee. 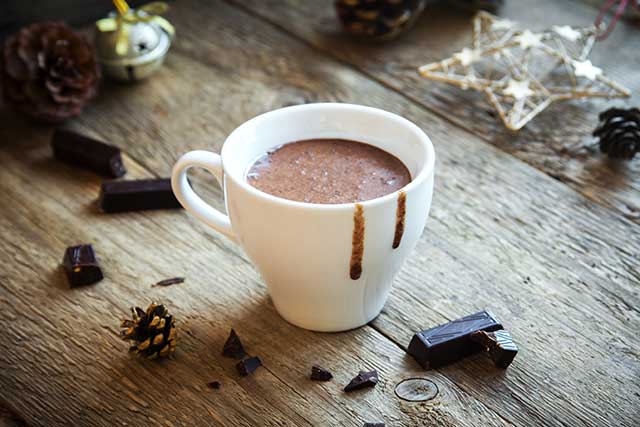 Most hot chocolate is full of sugar and does not deserve the ‘healthy’ tag.

However, just omit the sugar, and hot chocolate becomes quite a healthy drink.

For one thing, cocoa is exceptionally nutrient-dense, and it contains significant amounts of the minerals copper, iron, and magnesium (4).

Also, cocoa is one of the most polyphenol-rich foods in the world, and these compounds may have several health-protective benefits (5, 6).

Although cocoa does contain caffeine, a tablespoon serving is only 12 mg, so a cup of hot chocolate is much lower in caffeine than coffee (4).

Hot chocolate made merely from cocoa and milk can be tasty. However, a little bit of sweetener is fine for those who prefer a sweeter taste.

If you don’t mind a bitter taste, just cocoa and hot water provide a very healthy (but strong-tasting) drink.

Tea is an incredibly healthy drink, and the two most popular varieties are green and black.

Green tea enjoys the most popularity in Eastern countries like China, Japan, and Korea, but black tea is the favorite in the English speaking world.

Black tea is also higher in caffeine than green tea. This makes it a good drink to use in place of coffee for those who still want a caffeine boost.

For example, a typical cup of black tea contains 47 mg of caffeine, which is almost exactly half the amount found in coffee (7, 1).

Also, there are many different kinds of black tea. This range varies from the that people (English Breakfast) to mild (Chinese Golden Monkey).

Black tea has some interesting research behind it too, with a recent randomized trial suggesting that it can help to activate immune response (8).

Key Point: Black tea is a popular, healthy drink that contains approximately half the caffeine content of coffee. 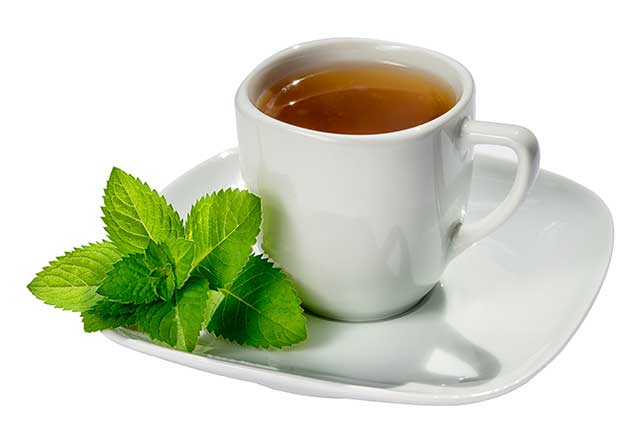 Black tea is the strongest “shade” of tea, and white tea is the weakest.

It is worth noting that all tea comes from the same plant, which is called Camellia sinensis, and the “color” depends on how the tea farmers process the leaves.

While the difference between green and white tea is not significant, tea farmers harvest white tea leaves at a younger (and fresher) age.

Additionally, white tea does not undergo a fermentation process like green tea (partially) and black tea.

The overall result is that white tea has a milder taste, and it is low in total caffeine, containing around 28 mg of caffeine per cup (9).

This low-caffeine content makes white tea an excellent coffee substitute for anyone wanting to cut down on (but not entirely remove) caffeine.

White tea has a refreshing taste and a mild, slightly grassy flavor.

Key Point: White tea contains less than one-third the caffeine of coffee, and it has the mildest flavor among tea.

Although coffee (and caffeine) are perfectly healthy in the right amounts, some people experience downsides from drinking coffee.

For this reason, the following drinks are all free of caffeine.

Teecino is a drink product that contains a mix of various fruit, herbs, nuts, and spices. Roasting this combination is supposed to emulate the taste of coffee.

To be specific, the ingredients profile of Teecino includes (10);

Despite the somewhat coffee-like taste, Teecino contains zero caffeine, and it has no stimulatory effects like coffee does.

Teecino does taste a little bit like a good brew of coffee, and it has the same strong roasted taste that coffee offers.

Despite this, it is not a like-for-like coffee replacement, and it probably won’t satisfy a true coffee lover, so don’t expect too much.

Teecino should be available at any major store, and it is also available online.

Key Point: Teecino is a coffee alternative that even tastes like coffee, and it is caffeine-free. 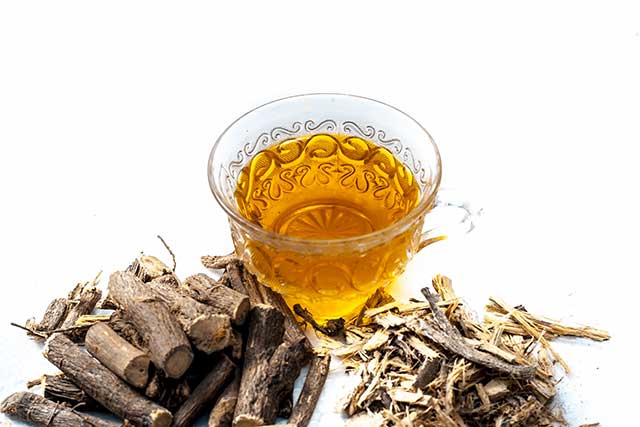 The reason for this sweetness is because licorice root contains a small amount of ammonium glycyrrhizate, a compound which is at least 30 times sweeter than sucrose (11).

Licorice root has a refreshing taste, and it is slightly bitter, sour, and sweet at the same time. The flavor is also robust, but it contains no caffeine.

Interestingly, this drink may also offer some potential dental health benefits. For instance, one recent randomized controlled trial demonstrated that licorice root is a cariostatic agent (12).

In plain English, ‘cariostatic’ refers to something which has dental caries-inhibiting properties.

Key Point: Licorice root is a healthy and unique-tasting tea that packs a big flavor.

Mushrooms are unique in the world of nutrition.

For one thing, they belong to their very own food “group,” and they are classed as fungi rather than a fruit or vegetable.

Some medicinal mushrooms contain biologically active compounds which can have potent effects on our body, and this is especially so for dried, concentrated extracts.

Amongst these extracts, reishi is one of the most famous. This mushroom has played a role in traditional Chinese medicine for centuries, and research shows that it has immune-boosting properties (13, 14).

For anyone looking for a healthy coffee replacement, reishi tea is a bold-tasting drink that people seem to love or hate. The tea is renowned for its strong, bitter, and earthy taste.

While I would not call reishi particularly tasty, it matches coffee for its strength of flavor. 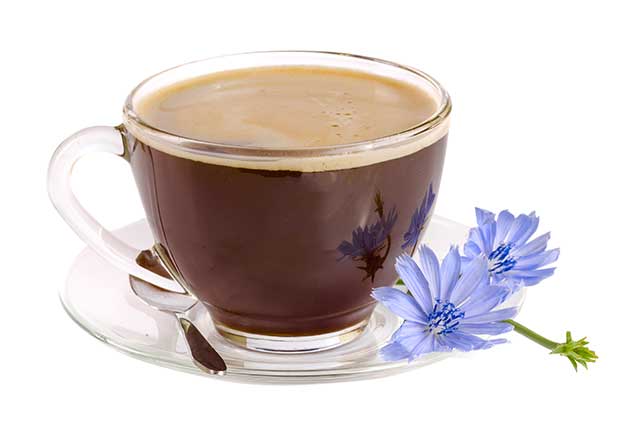 Similar to Teecino, roasted chicory root is a non-caffeinated alternative to coffee that tastes (and smells) slightly like the real thing.

The taste is not identical, and it is doubtful that any herb can match the unique flavor profile of coffee, but this one is not too far away.

Chicory has a rich and enjoyable flavor.

After brewing, the drink itself becomes a rich dark brown color, and it may be mistaken visually for real coffee.

Key Point: Chicory root looks, smells, and even tastes like the real thing. You won’t mistake it for coffee, but it would be hard for any other single herb to come closer in taste.

Ayurvedic roast coffee is an interesting drink that claims to provide the regular coffee experience without the caffeine.

It is the self-proclaimed best coffee replacement on the market.

The company who makes the drink claim that it is “a herbal coffee substitute that tastes like real coffee with no caffeine. Brews like coffee, drinks like coffee” (17).

But is that really true?

Well, this particular drink is similar to Teecino because it is a blend of different herbs and spices.

The ingredients are as follows;

As mentioned previously, roasted chicory has a taste very similar to coffee, and it is one of the main ingredients here.

The other ingredients compliment Chicory’s flavor, and it has a roasted/smoky taste similar to freshly brewed coffee.

Although it still won’t be mistaken for the real thing, it is a delicious alternative.

Key Point: Ayurvedic Roast Coffee is similar to Teecino, and both of these drinks offer a blended herb drink that almost (but not quite) emulates the flavor of coffee.

Lastly, just a quick note about coming off coffee.

Unfortunately, people often forget that caffeine is a drug, and dependence on a daily hit of caffeine can grow over time.

For this reason, quitting coffee cold turkey can result in some uncomfortable side effects which can include debilitating headaches.

Slowly reducing caffeine intake rather than suddenly stopping can help to reduce much of these symptoms.

All in all, these drinks are all healthy options that make tasty alternatives to coffee.