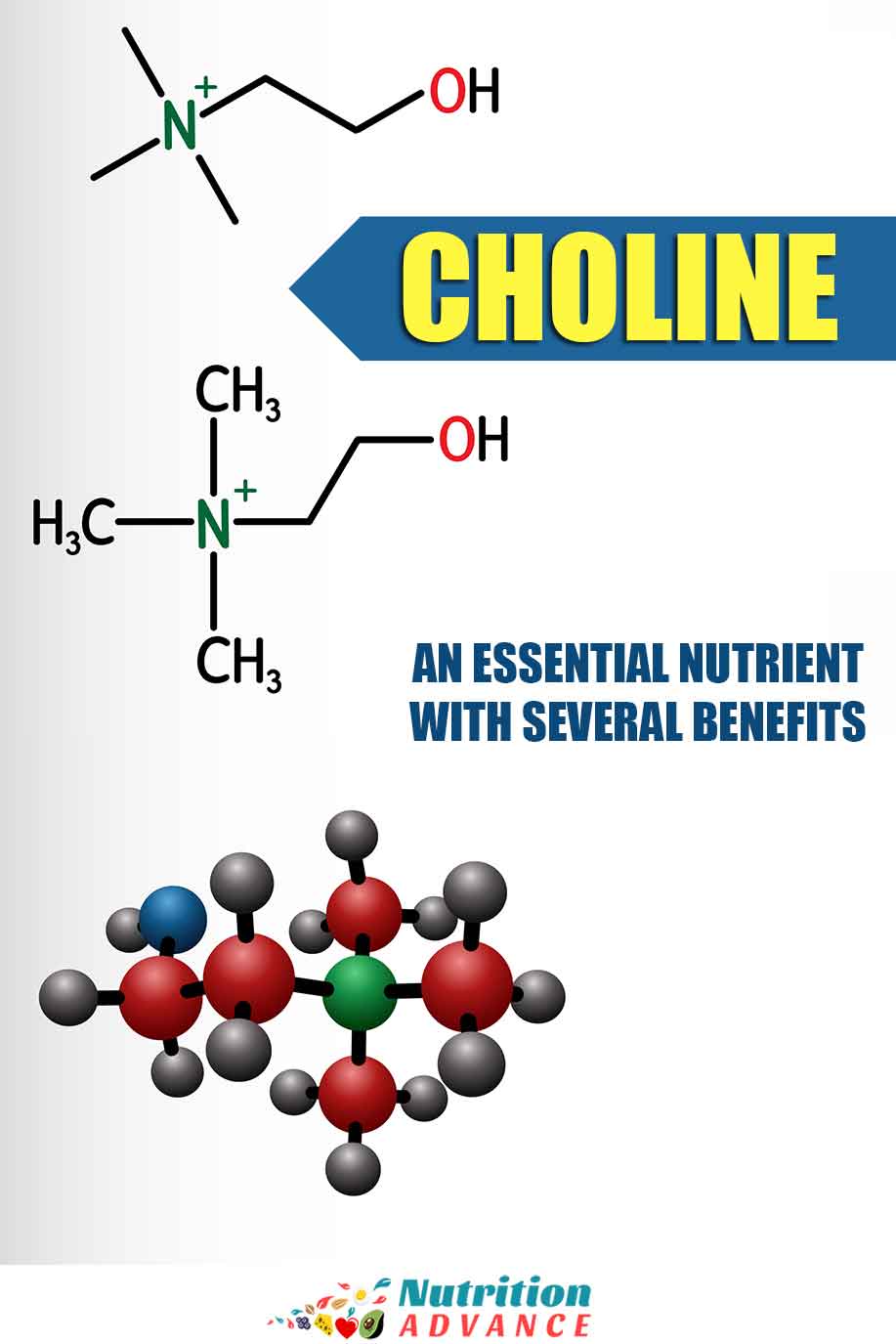 Choline plays a vital role in brain development, human metabolism, liver health, and it is a precursor to molecules that are essential for the structure of cells within the body.

Although it is not technically a vitamin, choline is an essential nutrient for human health.

This article provides an easy-to-understand summary of what choline is, how much we require, and its functions and potential benefits. 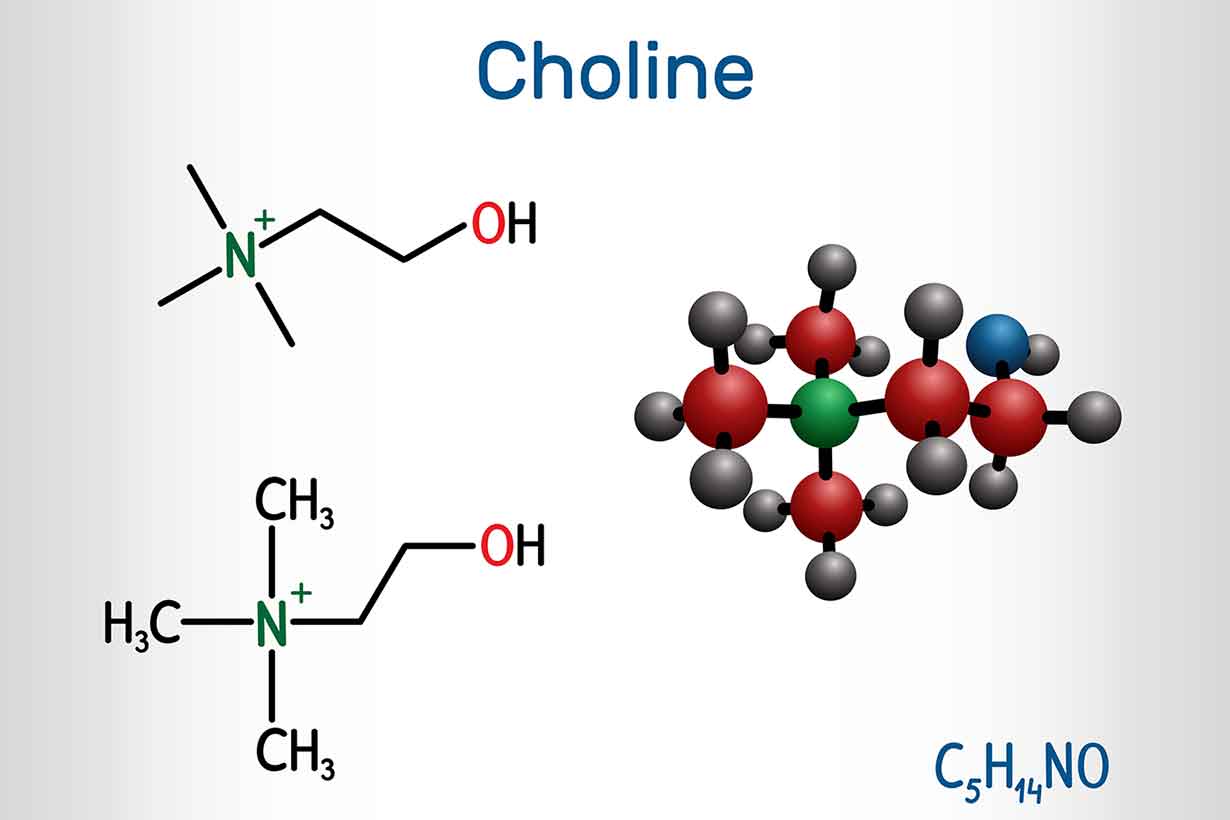 Choline is an essential nutrient that the human body produces endogenously (1).

In plain English, this means that the body will produce choline whether there is a dietary source of the nutrient or not.

However, the total amount of choline that the human body produces is not sufficient to meet absolute requirements. Therefore, humans need to obtain additional choline from dietary sources (1).

Interestingly, choline had been discovered and named by 1862, but it wasn’t until 1998 that choline was classified as an essential nutrient by the Institutes of Medicine (2, 3).

While choline is not a vitamin, it is often described as a vitamin-like nutrient.

Key Point: Choline is an essential nutrient that we need to obtain from our diet.

How Much Choline Do We Need?

However, choline requirements vary by life stage and gender.

Taking this into account, the Food and Nutrition Board at the Institutes of Medicine have published Adequate Intake (AI) requirements for different population groups.

Using data accessed via the National Institutes of Health, the following table presents these choline requirements (5).

While a lot of the research on choline is still at an early stage, choline and liver health is a topic that has some substantial research behind it.

Firstly, human studies show that diets with an inadequate provision of choline may lead to fatty liver disease. In a trial to determine the human dietary requirements for choline, 77% of men and 80% of women developed either fatty liver or muscle damage when they had an insufficient choline intake (6, 7).

In one large cohort study of 664 women with non-alcoholic fatty liver disease, those with an inadequate choline intake had the worst symptoms of fibrosis, otherwise known as “scarring” of the liver (8).

One potential reason for this may be the role that choline plays in transporting very-low-density lipoproteins (VLDLs) from the liver. VLDLs are very small particles that carry triglycerides (9).

In this regard, phosphatidylcholine (a molecule containing choline, fatty acids, and the mineral phosphorus) is required by the body to package and secrete VLDLs. If there is insufficient choline available, these VLDLs may accumulate and potentially cause damage in the liver (10, 11, 12, 13, 14, 15).

Key Point: Ensuring an adequate intake of choline is important for liver function.

There are several important nutritional considerations during pregnancy, such as folate intake and consuming enough iron.

Recent research suggests that choline may also have important benefits during this stage of life.

Furthermore, research shows that maternal choline supplementation may be beneficial for (17):

The image below provides a brief overview of the various health issues maternal choline intake may positively influence:

This particular study randomized pregnant women into two groups; thirteen women took 480 mg of choline per day throughout the third trimester, while thirteen other women took 930 mg of choline. In cognitive tests administered to the infants at 4, 7, 10, and 13 months old, the infants whose mothers took the larger choline dose reacted significantly faster (18).

Key Point: Ensuring sufficient maternal choline intake may have benefits for the offspring.

Choline and Cognitive Health In Adults

Just as choline appears to have brain benefits during the perinatal stage, it may potentially offer benefits throughout the lifecycle.

In a rodent trial, lifelong choline supplementation significantly reduced the accumulation of Aβ plaques, which are associated with Alzheimer’s disease pathology in the brain. Additionally, the mice supplemented with choline had greater memory performance than the control group (19).

In this area, a 2015 systematic review of fifty published studies examined the effect of choline on lifelong health. Regarding beneficial effects on adult cognition, there were some promising results, but the researchers noted that there is a lack of high-quality clinical intervention trials (20).

Key Point: Choline may potentially have benefits for cognitive health in adults, but high-quality human trials are necessary to confirm this.

Bacteria in the gut (known as the microbiota) metabolize choline into a molecule called trimethylamine N-Oxide (21).

Otherwise known as TMAO, this molecule has been associated with potential negative impacts on cardiovascular health. Studies in this area have found that people with higher TMAO levels have a statistically significant higher risk of heart attack, stroke, and cardiovascular death (21, 22, 23).

However, in science, we should always take care not to assume an association infers there is a causal relationship. In other words, without appropriate human trials, we can only say there is an association between TMAO and cardiovascular risk, and it may not be causal.

Two of the largest cohort studies were the Nurses’ Health Study (72,348 participants) and the Health Professionals Follow-up Study (44,504 participants). These studies showed no consistent link between choline intake and peripheral artery disease (25).

Overall, it is too early to either confirm or refute claims about choline intake, TMAO, and cardiovascular risk without further appropriate human research.

Key Point: The gut microbiota metabolize choline into TMAO. Higher levels of this molecule are associated with cardiovascular risk, but there is no evidence of a causal relationship between dietary intake of choline and cardiovascular risk.

Most nutrients can have negative effects when consumed in excessive amounts, and the same is true with choline.

Research in this area has shown that excessive intake of choline has been associated with (28):

For this reason, a set of tolerable upper intake levels has been published by the Food and Nutrition Board at the Institute of Medicine.

These upper limits are shown below, and there are no differences between gender (29):

Despite these tolerable upper limits for choline, it would be challenging to exceed these levels from food sources alone of the nutrient.

Key Point: An excessive intake of choline may have side effects, and tolerable upper intake levels have been set for choline across the different life stages.

Generally speaking, animal foods such as eggs and organ meat offer the most choline gram-for-gram.

However, it is also possible to obtain dietary choline from plant-based foods such as wheat germ and dried mushrooms.

For more information on dietary sources, see this list of foods high in choline.

There are several supplemental forms of choline, and one of these is soy lecithin. Soy lecithin contains phosphatidylcholine, and animal studies show that it significantly increases blood levels of choline (30, 31).

Choline bitartrate is another choline supplement recognized to be safe and effective (32).

Absolute choline deficiency is rare. However, choline inadequacy may be relatively prevalent.

As previously discussed, the ‘adequate intake’ for choline is set at 550 mg for adult males and 425 mg for adult females (5).

However, 2015-2016 data from the National Health and Nutrition Examination Survey (NHANES) shows that adult males consume between 324 mg and 419 mg of choline per day. Likewise, adult females only consumed between 251 mg and 303 mg per day (33).

Both of these intake levels are below the adequate intake level set by the Food and Nutrition Board at the Institutes of Medicine.

In the rare case of outright choline deficiency, it can have several clinical consequences, including fatty liver, general liver damage, and muscle damage (34, 35).

Key Point: Choline is an essential nutrient, and a choline deficiency can have serious adverse health effects.

Choline is one of the lesser-known nutrients, but it is essential for human health.

While research is undergoing on the potential benefits and drawbacks of choline, the nutrient appears to play a key role in brain development and liver function.

The best way to increase dietary intake of choline is to include foods such as eggs, organ meats, and wheat germ.

The 13 Essential Vitamins (and Where To Get Them)