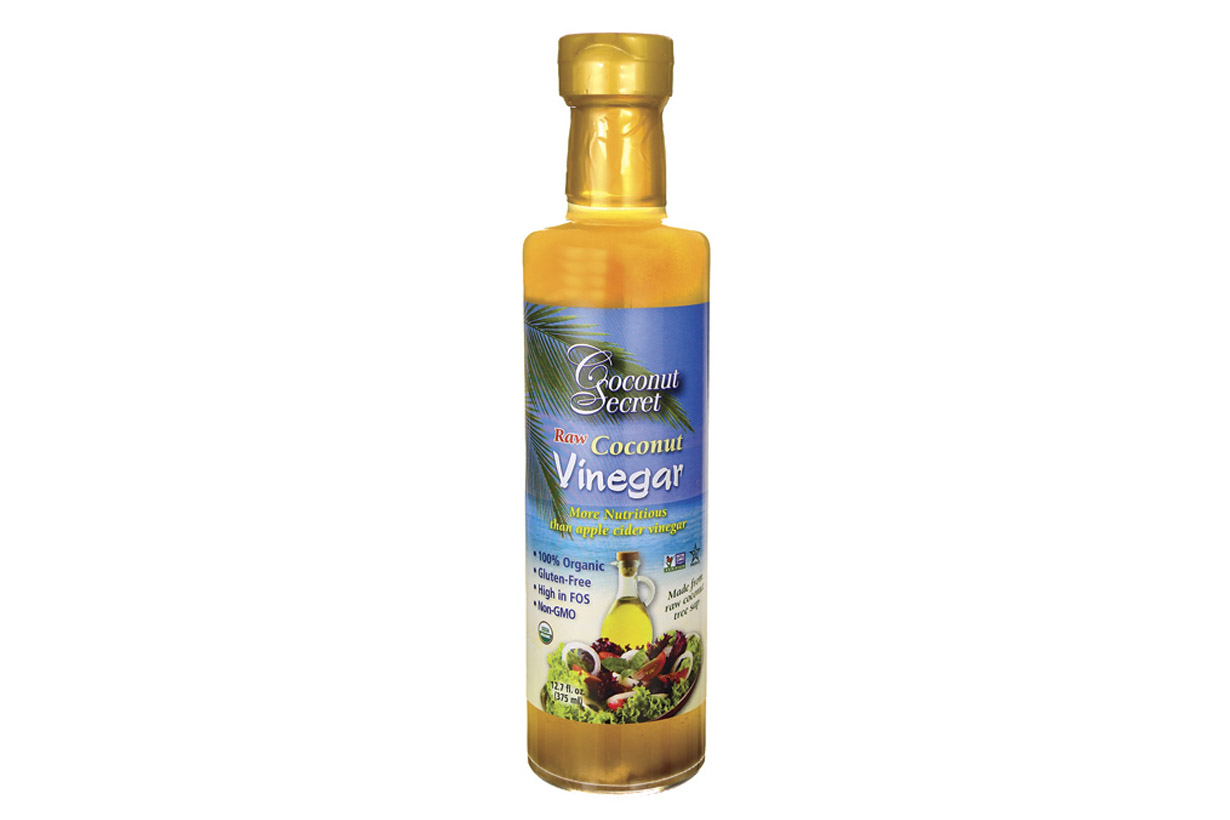 However, one product isn’t as well known as the others.

The name of this particular condiment is coconut vinegar and this article takes a look at what it is and possible health benefits.

What is Coconut Vinegar?

Apple cider vinegar, red wine vinegar, and balsamic vinegar tend to be the biggest names when it comes to vinegar.

In this regard, coconut vinegar is a kind of secret to most people.

However, as a type of fermented vinegar, coconut vinegar shares a common trait with the others. It’s also raw – ensuring that it contains all sorts of beneficial enzymes.

It’s also worth noting that despite obviously coming from a coconut, it doesn’t have any coconut taste. It’s a little similar to apple cider vinegar but with a slightly lighter, less bitter taste.

Coconut vinegar plays a big part in the cuisine of Southeast Asian countries, where it grows natively. It’s therefore pretty common to come across when eating at authentic Filipino, Thai and Indian restaurants.

Unfortunately, the vinegar is relatively rare in the western world – but you can pick it up at health stores or online.

Key Point: Coconut vinegar is raw and fermented. It is also similar to other vinegar like apple cider vinegar.

How to Use Coconut Vinegar 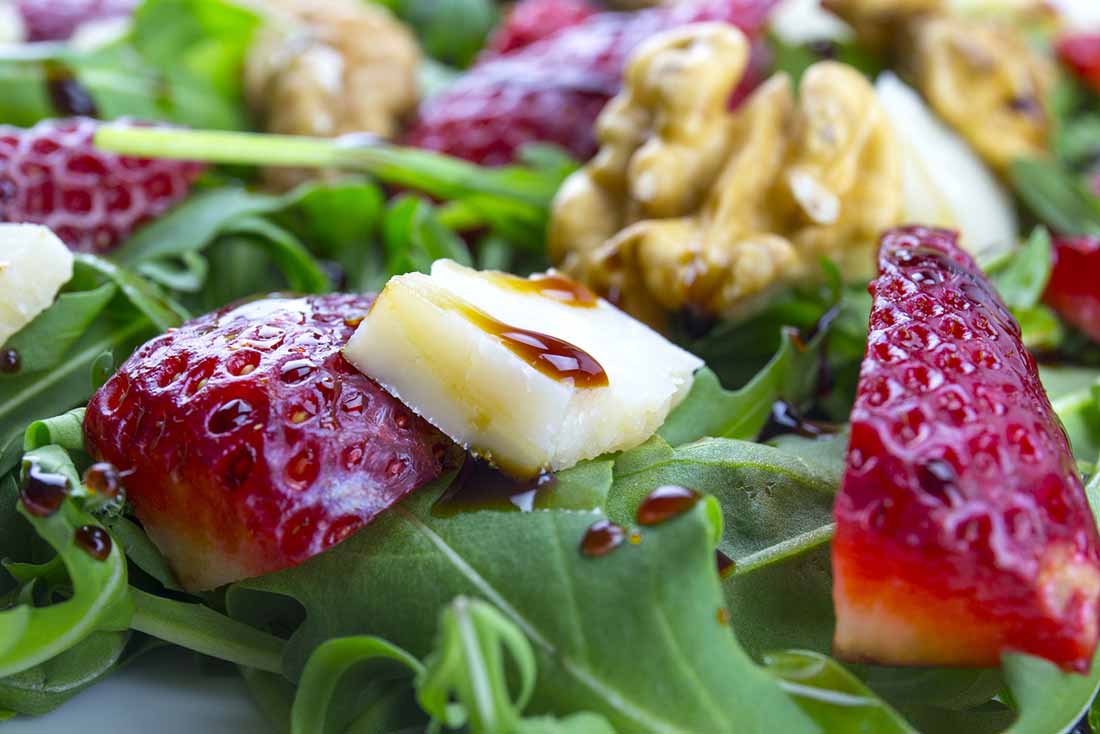 Coconut vinegar has a variety of uses, and you can use it in a similar way to any other vinegar.

Here are some of the common uses:

Key Point: Coconut vinegar can be used in the same way as any other vinegar.

Firstly, coconut vinegar is free of calories and does not contain a substantial source of nutrients.

As is the case with many types of vinegar, coconut vinegar also plays a role in digestive health.

To be honest, it’s hard judging the health benefits of coconut vinegar because there’s just so little available research to go on.

According to Coconut Secret, coconut vinegar is “Healthier than Apple Cider Vinegar.” Bear in mind that they have a financial interest in selling the product, though.

So rather than just repeating the manufacturers’ claims, let’s take a look at what we do know.

Key Point: While there are many health claims regarding coconut vinegar, few studies are available.

As far as I’m aware, there’s no data that shows the exact contents of coconut vinegar.

Despite this, coconut vinegar comes from fermented, concentrated coconut sap, which we do have data on.

Therefore, let’s take a look at the nutrients in coconut sap: 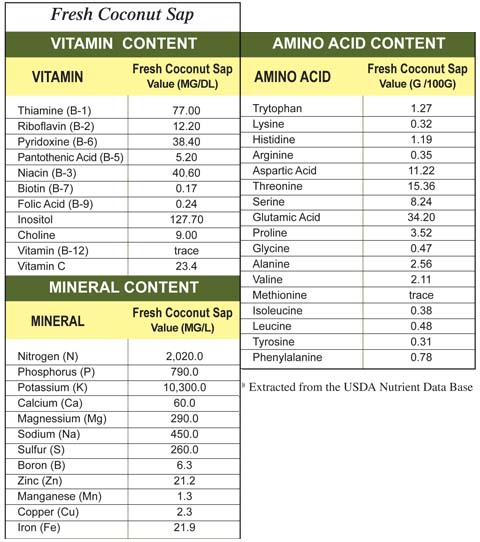 As you can see, the vitamin and mineral content of coconut sap is reasonably decent. There are quite a few B vitamins and a good range of amino acids.

The potassium content is especially impressive, and it’s also quite rich in magnesium.

Magnesium may be the most important mineral in our diet, and potassium is also an essential electrolyte mineral for optimal water balance in the body.

But how many of these nutrients are in a serving of coconut vinegar? At this instant, there appears to be no answer.

Key Point: The nutrient profile of coconut vinegar is hard to find, but the sap from which it’s made has a decent nutritional profile.

How to Make Coconut Vinegar 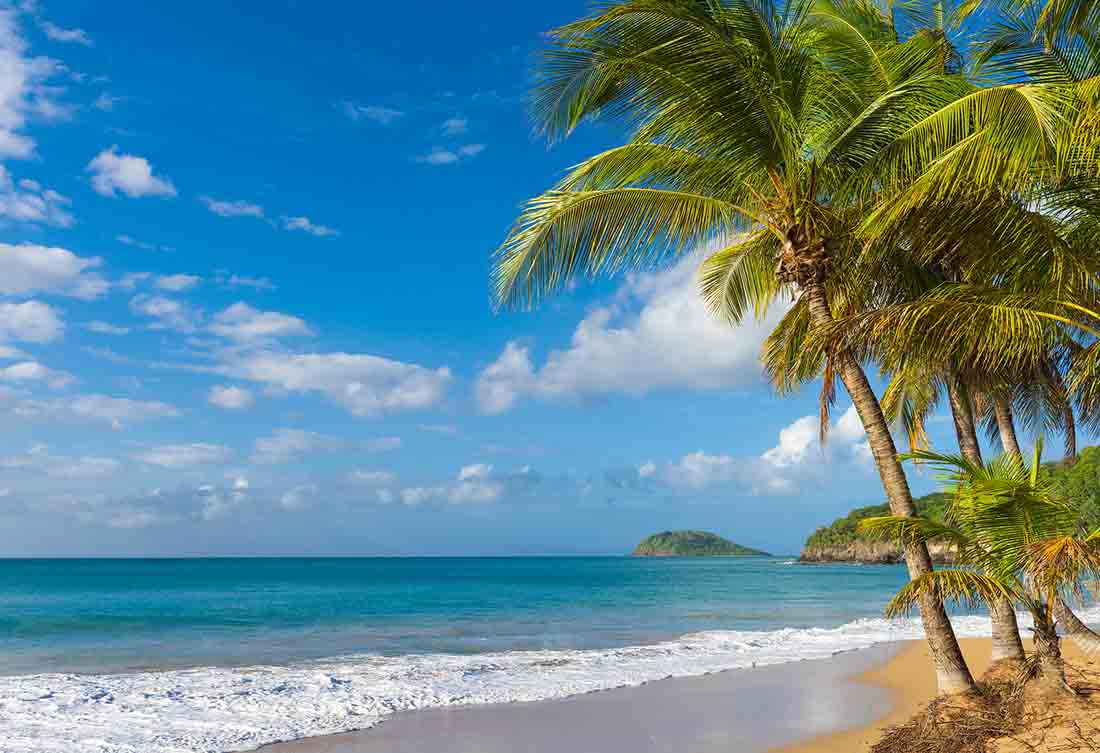 There are two ways of making coconut vinegar, and the two methods have a significant impact on the nutrient profile of the finished product.

The two ways are through using either coconut sap or coconut water.

Otherwise known as sap vinegar, workers collect coconut sap directly from the coconut blossoms on the tree before they bloom.

As we saw earlier, this sap contains a wealth of beneficial nutrients.

After collection, this sap ferments slowly for somewhere between 8 months and a year.

Nothing added and nothing removed; the vinegar created with this method is 100% fermented sap.

On the other hand, some manufacturers make vinegar by using coconut water. 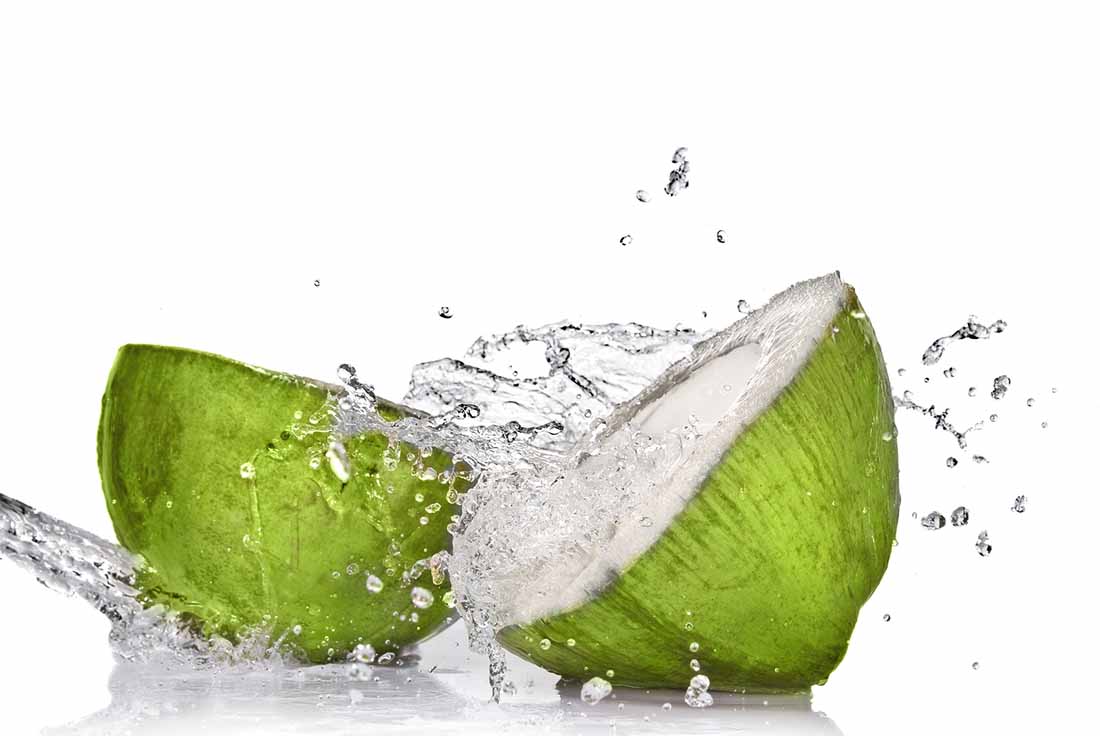 In contrast to the coconut sap method, vinegar produced from coconut water is cheaper and therefore more profitable to produce.

However, it is only left to ferment for several weeks and makes use of a fermentation starter. Although cane sugar is often the choice, this could be anything.

Another popular choice to start the fermentation process is apple cider vinegar.

One thing to be aware of is that the vinegar produced from coconut water doesn’t have the same nutritional value. This difference is understandable when you consider that coconut water is diluted and often has added cane sugar in it.

Key Point: Coconut vinegar can be made from either coconut sap or coconut water. The first of these options produces a more nutritious vinegar.

Coconut Vinegar vs. Apple Cider Vinegar: Which is Better?

As mentioned earlier, the distinct lack of studies on coconut vinegar makes it difficult to provide a fair assessment.

However, what we can do is compare coconut sap to fresh apples. These are the respective raw ingredients used to make both products. 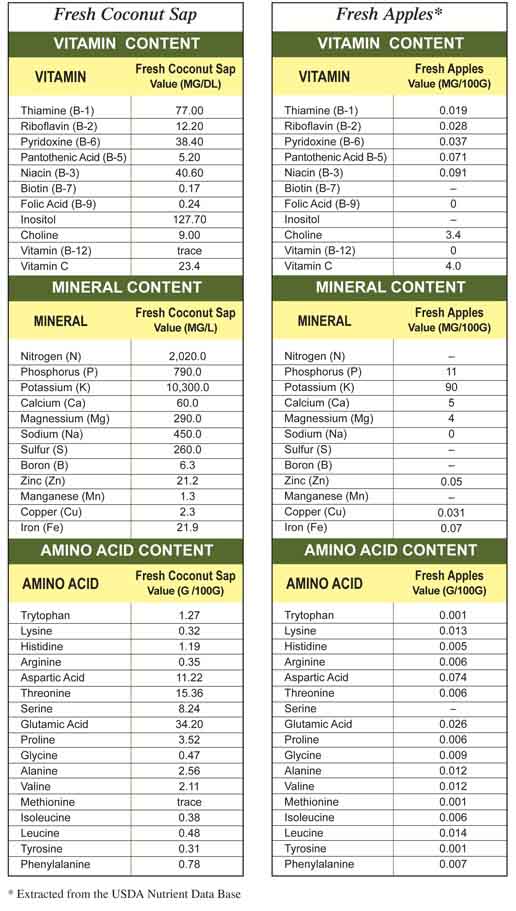 Regarding the amino acid content, it’s no contest; coconut vinegar provides a much more significant amount than apple cider vinegar.

Unfortunately, this still doesn’t tell us the exact amount of nutrients in a serving of coconut vinegar, though. It’s important also to realize this nutritional data is from the raw ingredients, and not the finished vinegar products.

However, we can certainly see how coconut vinegar could be higher in nutritional value than apple cider vinegar.

Key Point: Although we don’t have the nutritional data for the finished products, coconut vinegar has the edge due to the nutrients in coconut sap. 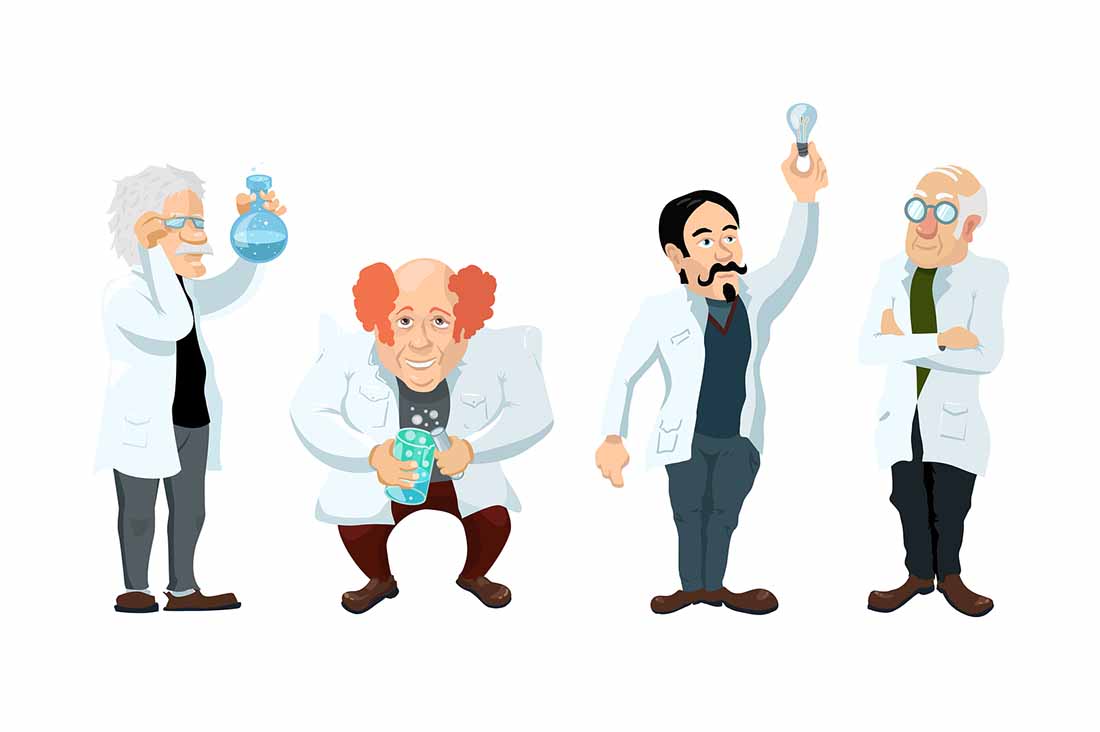 Unfortunately for coconut vinegar, this one is an uneven contest. Many studies have been published on apple cider vinegar over the years, while there isn’t any research on coconut vinegar.

Despite the lack of specific studies, coconut vinegar is relatively new, and studies will likely appear as it grows more popular in the future.

Apple cider vinegar has been extensively studied over many decades, and some of the health benefits are common knowledge.

Here are just a few of them:

Key Point: Apple cider vinegar has decades of research behind it. As of now, studies on coconut vinegar are hard to find.

If you’re looking to buy some coconut vinegar, which one should you get?

After researching, most of the available coconut vinegar appears to be from water.

However, one vinegar that’s widely available and made from sap is the product made by ‘Coconut Secret.’

Overall, coconut vinegar seems to be a relatively nutritious condiment that may provide a few health benefits.

I tried it out, and it’s great, it adds flavor to food, and it has many uses in the kitchen.

But at the end of the day, it’s a nice extra rather than an essential purchase.

Thank you so much for informing us! I enjoyed the data charts and recently purchased coconut vinegar. Another strong fact you taught me was about the sap versus the water. I am going to by the brand you mentioned. I really need it for digestion. I’ll use the other one for skin care and salad dressing. Thank YOU so much!
Angela in VA

Thanks Angela!
Hope you enjoy the coconut vinegar 🙂
Just ask if you need help with anything else!

nice to know coconut vinegar is better than apple cider vinegar usually use it.
from now on i will use coconut vinegar.
thanks for this informations.

No problem!
I would say they are both as good choices.