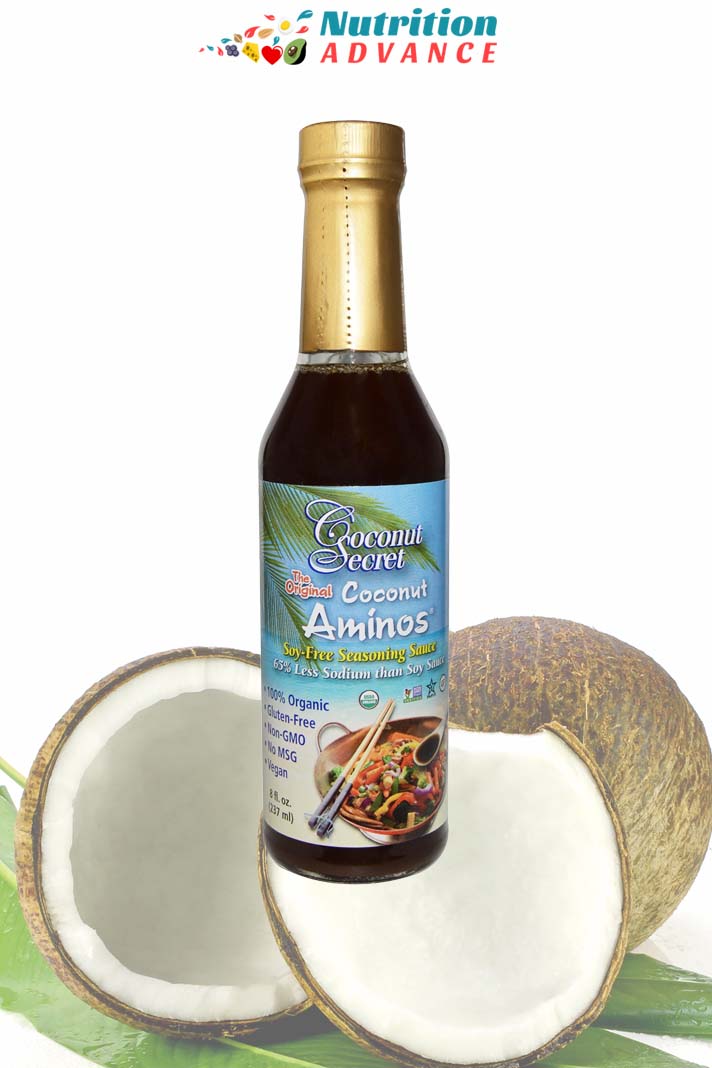 As a mainstay of East Asian cuisine, the value of soy sauce as a flavor enhancer is hard to argue.

However, some people—particularly those with allergies—may require an alternative.

Over the past several years, many soy sauce substitutes have entered the market.

Among these, Coconut Aminos is one of the most popular.

This article looks at what Coconut Aminos is, how it compares to soy sauce, and its potential benefits and drawbacks.

What is Coconut Aminos?

Coconut Aminos is a soy-free seasoning sauce made from the fermented sap of a coconut tree.

Generally speaking, the product is positioned as an alternative to soy sauce, and people often use it as a substitute in recipes.

There are several different brands of Coconut Aminos, but one of the most famous comes from a company called Coconut Secret.

Coconut Secret makes the following claims about their product:

In reality, most of these claims are little more than marketing.

For example, even if Coconut Aminos does contain 17 amino acids, in a serving size of 5-ml, they will be present in such small amounts that any effect will be negligible.

Additionally, at present, there is little evidence from human trials to suggest that MSG, gluten, and GMOs are harmful to the general population (1, 2, 3).

According to one producer of Coconut Aminos, the production process is relatively simple.

Firstly, workers extract fresh coconut sap from a coconut tree and blend it with sea salt.

Following this, the mixture is allowed to age and ferment naturally until ready.

Here are the basic nutritional values for Coconut Aminos per 5-ml serving (4).

It is not a source of fat or protein.

How does Coconut Aminos taste?

Coconut Aminos has an interesting taste, and some people may mistake it for soy sauce.

However, there are slight differences between the two.

For one thing, Coconut Aminos has a milder flavor. Due to the (small) carbohydrate content, it also has a sweeter taste.

While Coconut Aminos is salty, it doesn’t contain as much salt as soy sauce, and this is apparent in the flavor.

Overall, it has a clean, tasty, and enjoyable flavor that enhances the taste of food, but it feels somewhat diluted compared to soy sauce.

The flavor is not as rich as traditional soy sauce, and the weaker taste could be a disappointment for some people.

While the product originally comes from coconut, Coconut Aminos does not resemble the taste of coconut in any way.

Key Point: Coconut Aminos has a similar salty flavor to soy sauce. However, it is milder and sweeter.

How to use Coconut Aminos

Some potential ways to use the sauce include:

There are many different ways to use Coconut Aminos, and it can work as a soy sauce replacement in any recipe.

Does Coconut Aminos have any health benefits?

It is easy to find articles touting the “many” health benefits of Coconut Aminos.

However, the truth is that there is no scientific research on this product.

Additionally, the small serving size means that any trace nutrients or amino acids present will be mostly ineffective.

Perhaps the most significant benefits of Coconut Aminos come from what it doesn’t contain rather than what it does.

First, Coconut Aminos has a much lower sodium content than regular soy sauce.

Nutritional data shows that soy sauce contains approximately 291 mg of sodium per teaspoon. In contrast, the sodium content of one teaspoon of Coconut Aminos is only 113 mg (5, 4).

With less than half the sodium content of soy sauce, Coconut Aminos is an excellent soy sauce substitute for individuals following a low-sodium diet.

A large proportion of soy sauce products contain wheat in addition to soy, and they are often a source of gluten (6, 7).

For people with celiac disease or gluten intolerance, this makes Coconut Aminos a viable alternative that offers a similar taste experience to soy sauce.

Soy is one of the eight major allergenic foods (8).

This allergy is particularly common in children, and approximately 0.4% of children have an allergy to soy (9).

The taste of Coconut Aminos is like a lighter version of soy sauce, so it is an excellent alternative for people with soy allergy.

Key Point: Coconut Aminos is gluten-free, soy-free, and it has a lower sodium content than regular soy sauce.

Does Coconut Aminos have any drawbacks?

While there are no specific “bad” points about Coconut Aminos, it does have some drawbacks.

Firstly, it is relatively expensive, and it tends to cost slightly more than an equivalent sized bottle of soy sauce.

Additionally, it can be challenging to find, particularly outside the United States.

Lastly, while it does taste similar to soy sauce, it is not quite the same. Coconut Aminos has a mild flavor, and it may disappoint fans of dark soy sauces.

Are there other soy sauce alternatives?

For those who are looking for a soy sauce substitute, there are other options beyond Coconut Aminos.

Liquid Aminos is an unfermented sauce made from soybeans.

To make this condiment, the producers use a hydrochloric acid solution that breaks down the soybeans into amino acids.

It is worth noting that this sauce does contain soy, so it is unsuitable for those with soy allergies.

However, it is gluten-free, which may be a positive point for some groups of people.

Worcestershire sauce is a flavorful fermented sauce that originated in 1800s England, in the city of Worcester (10).

The sauce contains a wide variety of ingredients, including vinegar, salt, onions, garlic, and various spices.

While it is not a like-for-like replacement for soy sauce, it can work well for flavoring various dishes.

The ingredients used to make fish sauce can vary, but they are typically a simple combination of anchovies, water, and salt.

Other condiments for flavoring

Depending on the food, other condiments like salsa or coconut vinegar can also enhance the taste of food.

However, these are not like-for-like soy sauce substitutes, and they offer a completely different flavor.

Key Point: Aside from Coconut Aminos, several different products can function as a soy sauce substitute.

Where to buy Coconut Aminos

It is possible to find Coconut Aminos in large supermarkets and certain health stores.

For those who cannot find it locally, it is also available to buy online.

Although soy sauce tastes delicious, not everyone can eat soy.

Coconut Aminos offers a slightly different but similar taste, and it is free of allergens such as soy and wheat.

All in all, it is a fine-tasting soy sauce substitute that tastes almost as good as the real thing.

However, the milder flavor may not be for everyone.