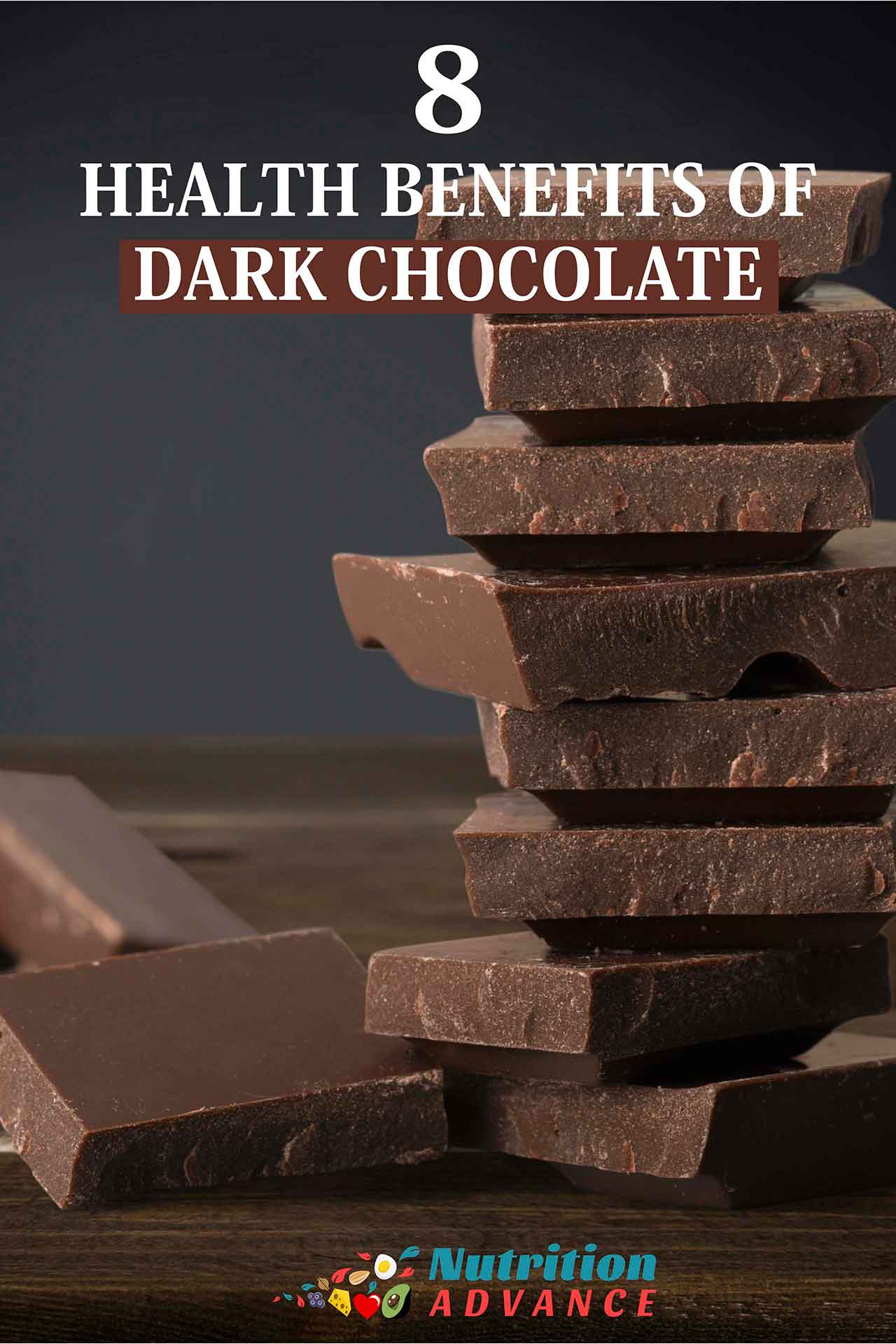 Dark chocolate is delicious, but is it a nutritious choice of food?

The answer to that question usually differs depending on the source. While some people refer to dark chocolate as a “superfood,” others see it as a treat that we should limit.

Are either of these positions correct, or does the answer perhaps lay somewhere in between?

This article takes an in-depth look at dark chocolate, its nutritional value, and its potential benefits.

What is Dark Chocolate?

Dark chocolate is a popular type of chocolate product made from cocoa beans.

The production of dark chocolate involves a lengthy series of steps:

Chocolate is one of the most popular food products in the modern world, and people have valued the cocoa bean for thousands of years, with notable examples being the ancient Mayan and Aztec tribes (6).

Dark chocolate contains higher amounts of cocoa than regular milk chocolate, and the taste can range from sweet to bitter and everything in between.

According to the FDA, any product claiming to be dark chocolate must have a cocoa content of more than 35% (7).

A good dark chocolate bar is usually a combination of three simple ingredients:

Additional flavoring ingredients that are relatively common may include things like vanilla, orange, mint, and coffee.

Some bars of chocolate may also contain additional ingredients such as soy lecithin, which is an emulsifier used within the food industry to improve the texture of products (8).

It is also worth noting that some cheaper bars of chocolate may use vegetable fats rather than genuine cocoa butter.

Does Dark Chocolate Have Any Benefits?

There are many different health claims about dark chocolate, and these can sometimes be exaggerated.

That said, published scientific research has identified some potential benefits, and dark chocolate also has a reasonably good nutritional profile.

According to the USDA FoodData Central database, the following table shows the nutritional values of a typical dark chocolate bar (9).

It is worth noting that these values (particularly the sugar content) will depend on the exact percentage of cocoa.

For example, a 70% bar of dark chocolate would still contain a moderate amount of sugar, but this falls as the cocoa percentage rises.

Bars that are over 85% cocoa contain minimal amounts of sugar, but they also have an increased bitterness due to the higher cocoa content.

As shown, dark chocolate is particularly high in copper, manganese, iron, and magnesium.

Oxidized LDL can form highly reactive molecules, and it is thought to promote atherosclerosis – the development of arterial plaque that leads to heart disease (13, 14, 15, 16).

Interestingly, various studies have demonstrated that flavonoids—a type of polyphenol present in chocolate—may help to prevent LDL particles from oxidizing (17, 18).

Additionally, a randomized controlled trial examined the effect of daily consumption of 40 grams of cocoa powder, the primary ingredient in dark chocolate. The trial found that over a four-week timeframe, this level of cocoa intake led to a significant average decrease in circulating levels of oxidized-LDL (21).

Key Point: Flavonoid polyphenols in dark chocolate may help to prevent the oxidation of LDL. Oxidized LDL is a recognized risk factor for cardiovascular disease.

Another potential benefit of dark chocolate is that it may help to decrease blood pressure levels modestly.

Several systematic reviews and meta-analyses have carefully looked into this claim.

In a recent Cochrane meta-analysis of forty human trials on the effects of cocoa products, the researchers examined the link between cocoa and blood pressure (22).

However, the dose of dark chocolate (and potentially the duration of intake) is likely important in this regard.

May Help To Protect Skin Against UV Damage

Sunlight offers a beneficial boost to vitamin D and nitric oxide levels. However, too much UV exposure is potentially damaging to our skin in terms of aging and— possibly —skin cancer risk.

Interestingly, the flavonoids in dark chocolate may potentially improve our skin’s natural resistance to UV from the sun. To measure potential UV damage, researchers typically use a measurement known as minimal erythema dose (MED). This measurement defines the minimum dose of UV that is capable of causing sunburn and other skin damage (28).

On this note, a controlled double-blind study fed high flavanol chocolate (HFC) to one group and low flavanol chocolate (LFC) to another for 30 days. Surprisingly, the UV resistance of the HFC group more than doubled while the LFC group remained unchanged (29).

While it is possible to buy high flavanol chocolate products, they are much more expensive than the regular varieties on store shelves.

On this note, more concentrated cocoa products such as cocoa powder and cacao nibs will also offer higher levels of flavanols.

Secondly, despite the potential beneficial effects of dark chocolate flavanols on UV resistance, it is vital to stay safe in the sun and avoid excessive exposure.

Does Dark Chocolate Have Mood-Boosting Properties?

Almost everyone loves chocolate and is it easy to hear claims that eating it makes us feel happy.

But is there any truth to this? Well, perhaps.

Theobromine affects our central nervous system, and research shows it may have a modest positive impact on mood (31).

By weight, cocoa powder contains approximately 2% theobromine, so a 70% or 85% cocoa dark chocolate bar should not be too dissimilar (32, 33).

There is also evidence that chocolate may interact with neurotransmitters and release “feel-good” endorphins. Chocolate contains the conditionally essential amino acid tyrosine, which is a precursor to dopamine (34).

Supporting these plausible mechanisms for dark chocolate having mood-boosting properties is a recent large observational study.

This study was a cross-sectional survey using data from 13,626 adults participating in the National Health and Examination Survey (NHANES). Most notably, this survey found that adults consuming dark chocolate had a significantly lower risk of suffering from symptoms of depression (35).

Further, those who reported the highest intake of dark chocolate had a 57% lower risk than those who consumed no chocolate.

It is worth remembering that this is just an observational finding, and we cannot infer that dark chocolate caused this lack of depressive symptoms. For instance, it could also be true that people who bought the most considerable amount of dark chocolate had a higher disposable income, which could also impact happiness levels.

However, it does show that trends suggest a potential benefit from dark chocolate on mood.

Key Point: Dark chocolate may have beneficial effects on mood.

Higher levels of LDL are associated with an increased risk of cardiovascular disease. Likewise, a higher level of HDL may potentially be beneficial for cardiovascular health due to its cholesterol efflux properties (36, 37, 38).

On the positive side, several human trials have demonstrated that dark chocolate intake may slightly decrease LDL while either slightly increasing or having no effect on HDL levels (39, 40, 41, 42).

These effects may be due to the combination of the fiber content of dark chocolate, the fatty acid profile, and the polyphenol content.

Although the fat content of dark chocolate is primarily saturated fatty acids, the predominant fatty acid is stearic acid.

Stearic acid is a saturated fatty acid that numerous studies have shown to potentially lower LDL levels, particularly compared to other saturated fats (43, 44, 45).

Key Point: Dark chocolate appears to have a positive effect on the lipid/cholesterol profile.

Polyphenols are a type of phytonutrient that we can find in plant foods.

These compounds appear to play a role in immune health, although the pathway through which they may exert benefits in the body is not fully understood (46).

We can find polyphenols in all types of foods, but significant sources include coffee, dark chocolate, extra virgin olive oil, herbs and spices, red wine, and tea (47, 48).

Many studies show that higher polyphenol intake is associated with a reduced risk of numerous chronic diseases (49, 50, 51).

Key Point: Dark chocolate is one of the most polyphenol-rich foods in the human diet.

Dark chocolate comes in all shapes and sizes.

There are three distinct categories of dark chocolate bars known as semisweet, bittersweet, and unsweetened.

The higher the cocoa percentage, the darker (and bitter) the chocolate will be. On the positive side, the darkest chocolate bars will also provide the most fiber and polyphenols.

However, they tend to have higher heavy metal content than lower cocoa chocolate bars.

Semisweet dark chocolate tends to contain relatively large amounts of sugar still, so they have a milder taste.

Bittersweet dark chocolate tends to be over 70% cacao solids and can be anything up to 99%.

It is also sometimes referred to as “extra dark,” and due to the higher proportion of cocoa solids, it contains a lot less sugar.

Unsweetened dark chocolate is self-explanatory and contains no sugar. This type of chocolate is exceptionally bitter, and people usually mix it with other ingredients for baking purposes.

Note: There is very little regulation over these terms, so check labels for the precise nutritional breakdown.

Overall, dark chocolate has a lot of positive points: it has a decent nutritional profile, it has potential benefits, and it tastes delicious.

That said, it is better to ignore the exaggerated ‘superfood’ claims that sometimes surround it.

The nutrients and polyphenols available in dark chocolate are also available elsewhere, and it is unnecessary to include it in the diet.

However, for those that enjoy the taste, it is a tasty and reasonably nutritious option when consumed in moderation.