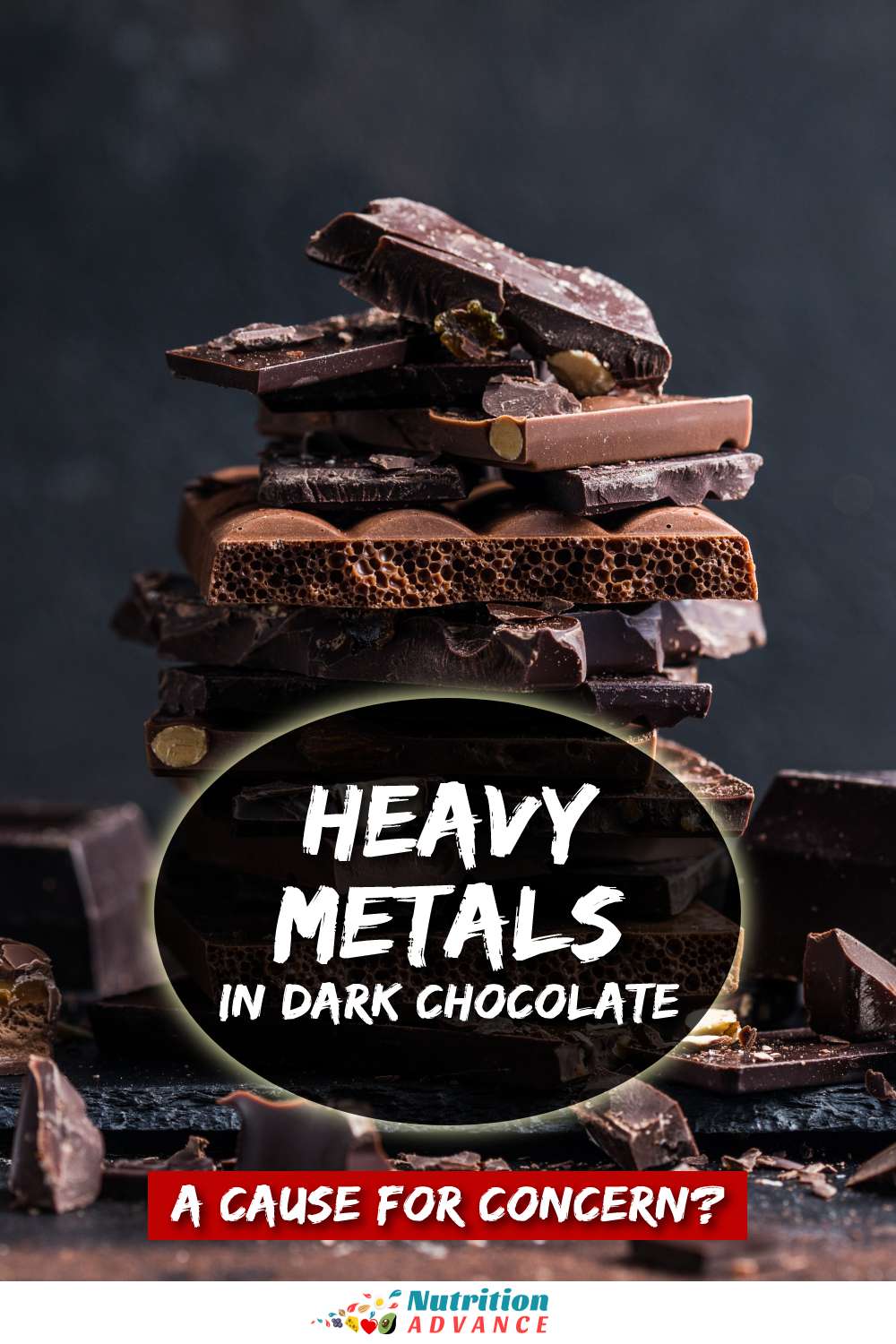 Dark chocolate is one of the most enjoyable and popular foods.

It has also been in the media all week thanks to a Consumer Labs report that tested the contents of 28 popular dark chocolate bars.

These tests showed that a significant proportion of dark chocolate was contaminated with “high levels” of heavy metals.

Is this a cause for concern?

This article will examine what the Consumer Labs report found and consider the broader nuances around heavy metals and dark chocolate.

Cadmium and lead are both heavy metals. At high intake levels, it is thought that cadmium can lead to kidney problems and loss of bone mass density (1).

Research suggests that high exposure to lead may cause neurological problems, growth issues in children, and increase the risk of cardiovascular and kidney disease (2).

Before we analyze this topic, let’s first look at what Consumer Labs tested and how they presented their results.

Consumer Labs is, in its own words, “an independent nonprofit member organization that works side by side with consumers for truth, transparency, and fairness in the marketplace” (3).

The organization often does work that involves testing the efficacy and purity of various supplements and food products.

Based on these results, Consumer Labs presented how much lead and cadmium the dark chocolate bars contained as a percentage of California’s Proposition 65’s ‘Maximum Allowable Dose Level’ (MADL).

These maximum allowable dose levels for lead and cadmium are as below (4):

It is important to note that Proposition 65 is incredibly stringent and has much lower upper dose limits than other health organizations, including the Food and Drug Administration (FDA). We will come back to this point later.

Another critical issue is that Proposition 65’s MADLs are not designed to infer that doses exceeding these limits are unsafe. Instead, the point is to warn of a potential hazard and that an ingredient capable of causing harm (at some level) is present (5).

Firstly, in the Consumer Labs report, let’s examine how much cadmium and lead each dark chocolate bar contained per ounce (28-gram) serving.

The table below shows the dark chocolate bars that tested as having high levels of cadmium.

In the table, you can see the amount of cadmium each bar contains compared to the State of California’s MADL (6):

As the table shows, dark chocolate bars with the highest cocoa percentage typically contained the most lead.

The table also displays the amount of lead each bar contains compared to the State of California’s MADL (6):

Once again, these amounts show the amount of lead in the whole bar.

The table shows the heavy metal content of each bar as a percentage of the State of California’s MADL (6):

Dark Chocolate Bars With Low Levels of Cadmium and Lead

Lastly, five bars out of the twenty-eight had test results showing low cadmium and lead content.

In the table, you can see the cadmium and lead content of these bars as a percentage of the State of California’s MADL (6):

Key Point: The Consumer Labs report found that 23 out of 28 dark chocolate bars contained high levels of cadmium, lead, or both. Only 5 of the 28 tested bars had low levels compared to California’s Maximum Allowable Dose Levels.

Consumer Labs chose to present the amount of cadmium and lead in dark chocolate as a percentage of California State’s ‘Maximum Allowable Dose Level’ (MADL).

As previously mentioned, the State of California’s Proposition 65 MADLs are stringent.

An important point to understand here is that Proposition 65 is a law aiming to reduce or eliminate exposure to any ingredients that may cause harm (7).

Thus, their ‘maximum allowable dose levels’ are based on severely restricting ingredients that have the potential to cause harm. However, there does not need to be proof or scientific evidence that ingredients exceeding these set levels do cause harm to humans.

The MADLs are ultra-conservative and based on the notion that “exposure at a level 1,000 times greater than the MADL is expected to have no observable effect” (8).

Let’s look at an example of how strict proposition 65 can be. In 2018, a court ruled that California’s Proposition 65 may require all coffee products in California to carry a cancer warning (9).

This was due to roasted coffee forming trace amounts of acrylamide, a chemical that can cause cancer when given to animals in large, frequent, and prolonged doses (10).

Coffee companies were unhappy with this ruling, and so was the FDA, which got involved by releasing a statement calling for coffee to be exempted from California State’s cancer warning law (11).

To put all this another way: California’s ‘Maximum Allowable Dose Levels’ for cadmium and lead are very stringent.

It is ideal for products such as dark chocolate to contain no contaminants.

However, we must look at the evidence and consider if such small doses of cadmium and lead can cause harm.

Key Point: The Consumer Labs report presented the amount of cadmium and lead in dark chocolate based on California’s ‘maximum allowable dose levels.’

What Dietary Lead Intake Levels Does the FDA Recommend Not Exceeding?

How Did the FDA Determine Their Interim Reference Levels?

In their own words, here is the FDA’s explanation of these guidance levels: “These levels allow for differences across human populations and are set nearly ten times less than the actual amount of lead intake from food that would be required to reach the CDC’s blood reference level” (12).

The CDC (Centers for Disease Control and Prevention) ‘blood reference level’ refers to a blood lead level that is high enough to be of concern.

Thus, the FDA’s reference level involves a dietary lead intake that can be seventeen times higher for an adult than California’s MADLs. Additionally, these FDA recommendations are set ten times lower than the amount that would cause a concerning level of lead in the blood.

Should We Be Concerned About Dietary Lead Exposure From Dark Chocolate?

According to the Consumer Labs report, the FDA interim reference levels are significantly higher than the amount of lead in a whole bar of the highest-lead dark chocolate.

With this in mind, should we worry about the amount of lead in dark chocolate?

On one side, even if we ate a whole dark chocolate bar every day, the amount of lead would still come firmly within the FDA’s Interim Reference Values.

That said, lead is a poison to human health, so exposure should be limited as much as possible. This understandable line of argument perhaps explains the more rigid limits set by California’s MADLs.

The CDC and Mayo Clinic both echo this message. Even though the CDC has set a ‘blood reference level’ that would require dietary lead exposure 100x greater than California’s MADL, they clearly state that “there is no known safe blood lead level“ (14, 15).

Unfortunately, this is one of those areas where we don’t have enough scientific evidence to confidently state there’s zero risk from chronic low exposure to dietary lead.

The absence of evidence for harm from low levels of lead is not proof that low levels are safe.

That said, a moderate amount of dark chocolate a few times per week is likely not worth worrying about. The CDC and FDA gathered experts to set their reference values, and these people will have scrutinized all the available evidence when setting these values.

It is also worth remembering that dietary lead exposure is not an issue exclusive to dark chocolate or cocoa products.

Key Point: There is no evidence to say with certainty that the amounts of lead found in dark chocolate are safe. However, based on the FDA’s interim reference values, it is unlikely that reasonable intake levels of dark chocolate are something to worry about.

Should We Be Concerned About Dietary Cadmium Exposure From Dark Chocolate?

We also have an idea of how much cadmium people consume daily.

The National Health and Nutrition Examination Survey (NHANES) 2007-2012 recorded the estimated cadmium intake of 12,525 people based on 24-hour dietary recalls. The average cadmium intake in this population was 4.63 mcg per day (20).

Also, the European Food Safety Authority has set a ‘tolerable weekly intake’ level for cadmium at 2.5 mcg per kilogram of body weight per week. In other words, cadmium’s tolerable weekly intake level would be 175 mcg (25 mcg per day) for an individual weighing 70 kilograms (154 pounds). The EFSA stated that, based on the state of knowledge, this level “ensures a high level of protection of consumers” (21).

As we can see, this is another case of the California MADL being set multiple times lower than other highly reputable health organizations.

Once again, it is true that no cadmium is better than small amounts.

However, based on recommendations from the EFSA, the World Health Organization (WHO), and the Food and Agricultural Organization (FAO) of the United Nations, none of the dark chocolate bars in the Consumer Labs test come close to the daily reference level.

This article shows that dark chocolate can be a source of heavy metals like cadmium and lead.

However, even the highest cadmium and lead levels in dark chocolate are easily within reference levels set by the FDA, EFSA, and JEFCA.

The fact that these levels exceed California’s conservative and controversial ‘maximum daily allowance level’ may concern some individuals.

In this case, there is no harm in selecting a dark chocolate bar from the ‘low in cadmium and lead’ category. This may help to minimize exposure and encourage other brands to tackle their heavy metal levels.

That said, it’s unlikely that a few pieces of dark chocolate from time to time is anything to worry about.

6 thoughts on “Heavy Metals In Dark Chocolate: A Cause For Concern?”