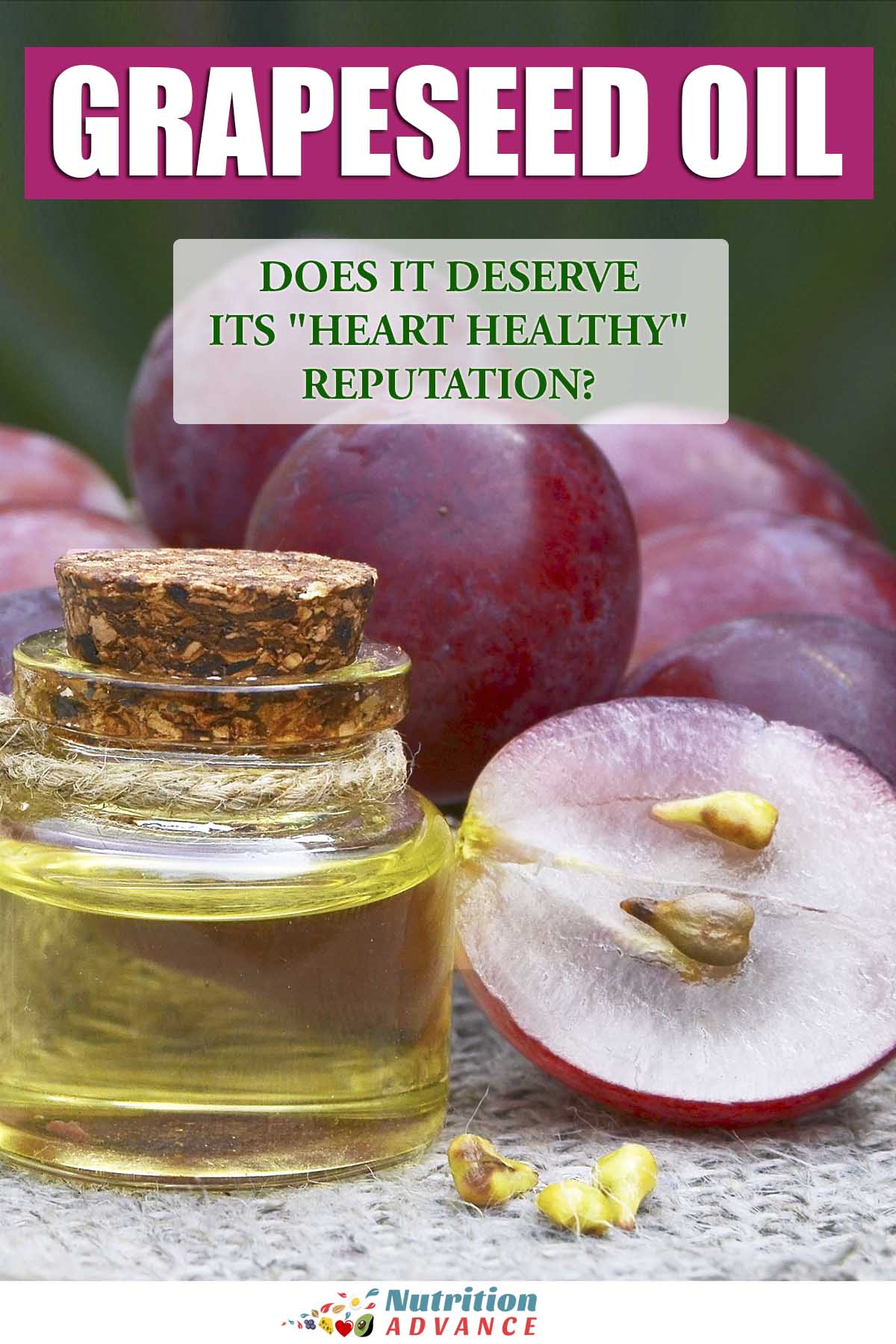 It is easy to hear claims that grapeseed oil is a “heart healthy” cooking oil.

However, is this true or is it purely marketing?

In this article, we review the research on grapeseed oil to determine whether it deserves its reputation as a healthy cooking oil.

What Is Grapeseed Oil?

As the name may suggest, grapeseed oil is a cooking oil made from grape seeds.

Interestingly, this oil is a by-product of the winemaking industry.

In the past, after wine producers finished juicing the grapes, millions of seeds would go to waste.

However, industry soon found a use for these leftover seeds and started using them to produce grapeseed oil, initially for use in beauty products (1).

Soon after, the potential uses for these seeds doubled as researchers realized they could use the seeds to make edible cooking oil (2).

These health claims come from the fact that the oil has a high smoke point and polyunsaturated fat content.

While this may sound good in theory, the crucial test is how grapeseed oil performs during high heat cooking, and we will get to that shortly.

Key Point: Grapeseed oil is a by-product of the wine-making industry, and it is a cooking oil with a high smoke point.

How Is Grapeseed Oil Made? 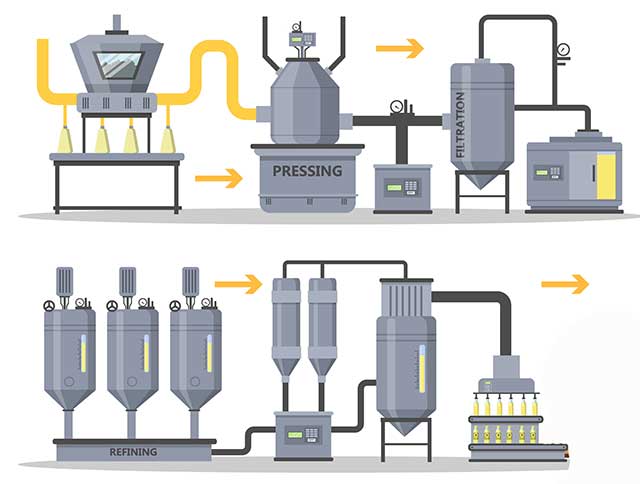 Before we look into grapeseed oil’s nutritional properties, here is a quick examination of how manufacturers produce it.

Firstly, there are two distinct methods for producing grapeseed oil;

The solvent extraction process uses heat and chemicals such as hexane. This process involves (4);

The majority of grapeseed oil for sale in stores has been through the solvent extraction process.

As an isolated oil, grapeseed oil provides little more than a source of fat.

However, for reference purposes here is a summary of the main nutritional values per tablespoon serving (5);

As shown in the table, grapeseed oil is predominantly a source of polyunsaturated fat, mainly omega-6 fatty acids.

Grapeseed oil contains small amounts of monounsaturated fat and an even smaller serving of saturated fat.

The only vitamin or mineral of note in grapeseed oil is vitamin E, with one tablespoon providing 19% of the RDI.

However, it is worth noting that the smoke point of an oil is not a constant throughout cooking, and it can change as the oil breaks down.

The best measure of a cooking fat’s properties is oxidative stability.

Key Point: Grapeseed oil is mainly a source of omega-6 polyunsaturated fat and it contains a decent amount of vitamin E. 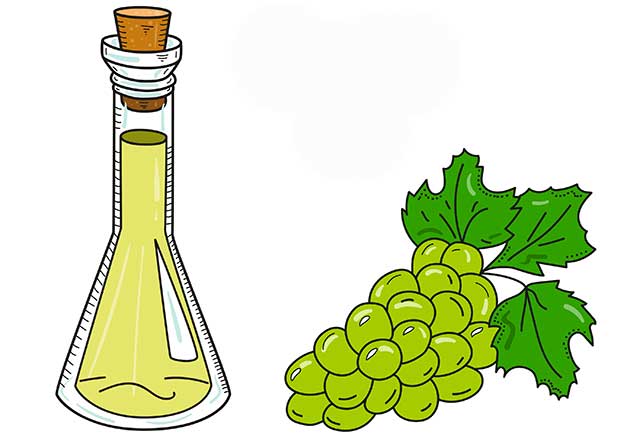 Rather than the nutrition profile or smoke point, what really matters is whether or not grapeseed oil has positive or negative effects on health.

To determine this, here is an overview of what the studies show.

First, we will look at the benefits.

As previously mentioned, grapeseed oil is a good source of vitamin E, containing 19% of the RDI in every tablespoon.

Vitamin E functions as an antioxidant in the body, and it may help to attenuate oxidative stress and reduce inflammation in the body (6, 7).

Additionally, studies show that vitamin E tocopherols help to protect the fats in oils against oxidation (8).

In simple English, this means that the blood was less likely to thicken and “clump together”.

This means the grapeseed oil may have a blood-thinning effect similar to how aspirin works; thinner blood means a reduced risk of blood clots (9).

These polyphenols may hold benefits for the human body, and they can help to protect oils from oxidation.

However, oils tend to lose large amounts of these compounds when they undergo refining processes such as bleaching and deodorization. As a result, the regular grapeseed oil on store shelves is unlikely to contain these compounds in significant numbers (11). 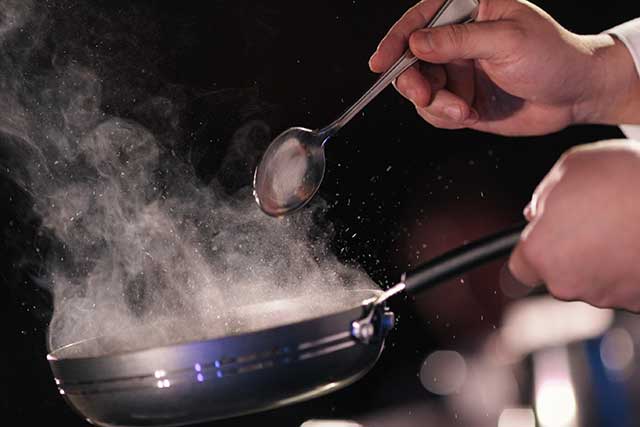 While grapeseed oil does have some potential benefits, unfortunately, they are dwarfed by the negatives.

Here are some of the main drawbacks of using the oil that research has identified.

Oxidative stability is the most important consideration, and grapeseed oil appears to fail it.

In other words, the fatty acids break down with exposure to heat, which results in the formation of harmful chemicals that can damage our health.

In one recent study, an independent test laboratory heated ten different commercial cooking oils to a temperature of 180°C (356°F).

At the one hour point, grapeseed oil contained more polar compounds (oxidation products) than any other oil. It also displayed lower oxidative stability than all nine other oils (14).

We can see an illustration of these results in the graph below;

By now, the whole world knows that trans fats are detrimental to our health.

However, it is not only trans fat products that can contain these harmful fats; vegetable oils do too.

In the laboratory test previously discussed, the researchers measured the trans fat levels in the commercial cooking oils.

Compared to all nine other cooking oils, grapeseed oil contained the most trans fats both before and after exposure to high heat.

The graph below shows how grapeseed oil compares to other cooking oils for trans fat formation;

3) Excessive Amounts of Omega-6 May Cause Health Problems

Omega-6 fatty acids are essential to our health, and they are available in a wide variety of foods.

However, we only require them in small amounts, and seed oils like grapeseed are a substantial source of these fats. For example, a tablespoon of oil can be like eating hundreds of seeds at one time.

On the negative side, research suggests that an excessive dietary intake of omega-6 could potentially cause problems.

One study suggests that a high omega-6 diet may cancel the anti-inflammatory benefits of omega-3 in the diet (15).

Furthermore, very few people—especially children and the elderly—consume enough EPA and DHA omega-3 fatty acids. At the same time, most individuals have an imbalanced intake of omega-6 to omega-3 fats. Some studies suggest that this may promote inflammation (16, 17, 18).

4) May Still Contain Traces of Hexane

The solvent hexane plays a role in the solvent extraction process used to produce grapeseed oil.

After the extraction of the oil, producers remove the hexane from the oil before it goes out to sale.

However, some trace amounts of hexane residues may remain after this.

On this note, there is a ‘maximum residue limit’ (MRL) for the amount of hexane which is acceptable.

A recent study also showed that although 36 out of 40 commercial vegetable oil samples contained hexane, none of them exceeded the MRL (19).

In short, there is no evidence that these residues can cause harm, but it is something that people may wish to be aware of.

Key Point: Grapeseed oil shows lower oxidative stability than other cooking oils – and it contains the most trans fats.

While grapeseed oil may have a few positives like vitamin E and potential phenolic contents, the research is clear; it is not a healthy cooking oil.

It is well established that oils high in polyunsaturated fat have poor heat stability.

For these reasons, it is a good idea to leave the grapeseed oil on store shelves and seek out healthier alternatives.

The most evidence-based cooking oil at present is extra virgin olive oil (EVOO).

EVOO is very heat stable, full of beneficial compounds, and has a wide range of positive research behind it.

Other options that are stable at high heat include oils like avocado, animal fats, nut oils (except walnut) and coconut oil.