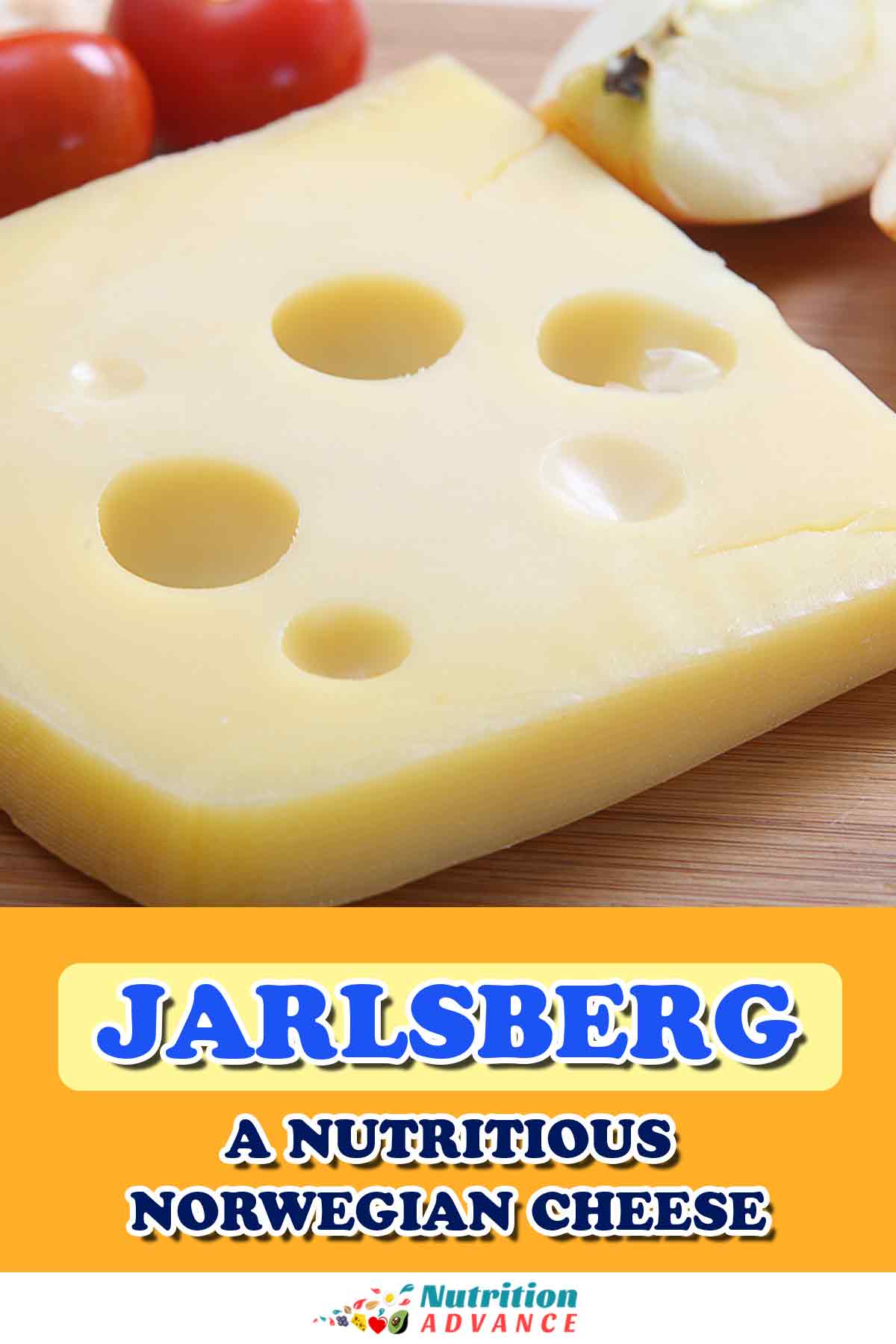 Jarlsberg is a famous semi-hard cheese made with cow’s milk from Norway.

It is one of the most popular cheeses, and it resembles Swiss cheese in appearance, with characteristic large holes throughout and a smooth, butter-like pale yellow color.

This article provides a guide to Jarlsberg and its characteristics, nutritional values, and ways to use it.

Jarlsberg is a versatile cheese that can be used in various ways, and it has a mild flavor reminiscent of, but slightly different from, Swiss cheese.

The flavor is slightly sweet and buttery, and even a little nutty, and the cheese has a smooth and creamy mouthfeel like Edam (or Babybel) and provolone.

For those who have tried Jarlsberg, the flavor is similar (ish) to Gruyere cheese.

According to ‘The Complete Idiot’s Guide To Cheeses of the World,’ the origins of Jarlsberg may go back to the mid-19th century in a region of Norway called Jarlsberg. At this time, a local cheesemaker called Anders Larsen Bakke started producing a Swiss-style cheese that gained popularity and was first referenced in 1855 (1).

However, the cheese failed to make a lasting impact and disappeared before resurfacing in the mid-20th century.

In 1956, Professor Ystgaard of the Agricultural University of Norway started a cheesemaking project that lasted for around ten years and resulted in the modern version of Jarlsberg that the world knows today (2).

The name ‘Jarlsberg’ was registered with the Norwegian Ministry of Agriculture—alongside the official definition of the cheese—in 1957 (2).

Interestingly, the official production process of Jarlsberg is a protected secret, and only a handful of people are thought to know how to make the cheese.

People may perhaps exaggerate the extent of this secretiveness. Still, The Guardian notes that the manufacturing process is “known only to a handful of Norwegians, who, like the royal family, are never allowed to travel together” (3).

That said, the production of Jarlsberg is thought to share similarities with that of Swiss cheese, and the cheese is aged for at least three months. It is also possible to find older varieties of Jarlsberg with an aging process of 12 months or more.

It is also known that the fermentation process of Jarlsberg uses a species of propionibacteria. The metabolism of this bacteria is responsible for the large holes in Jarlsberg that contribute to the cheese’s iconic look (2, 4).

In the present time, Jarlsberg enjoys popularity around the world.

Key Point: Jarlsberg is a popular Norwegian cheese that was introduced, in its current form, in the 1950’s.

There are four main official varieties of Jarlsberg, and these include (5, 6):

The original variety of this cheese is the same version that most people worldwide know as ‘Jarlsberg.’

It has a fat content of 27% and contains the following ingredients (7):

The only difference between Jarlsberg’s ‘original’ and ‘lite’ varieties is the lower fat content.

Jarlsberg Lite has a fat content of 16% and contains the following ingredients (8):

The ‘Reserve’ (premium) variety of Jarlsberg has a longer aging time and is guaranteed to be a minimum of 12 months old.

Jarlsberg Reserve has a stronger and more tangy flavor than the original variety, but it contains the same ingredients (9):

A hickory-smoked version of Jarlsberg offers the same mild and tasty cheese with an added smoky flavor.

Here are the basic nutritional values for the three main varieties of Jarlsberg per 100 grams. The data source is the official Jarlsberg website (5).

As shown in the above nutritional values, Jarlsberg is an excellent source of calcium.

However, like other cheese varieties, Jarlsberg will also provide a range of essential nutrients in high amounts, such as the various B vitamins.

The official Jarlsberg website does not publish full nutritional values for the different varieties of Jarlsberg. However, the Norwegian food composition tables provide more details on each variety’s vitamin and mineral content.

For more information, see these listings:

Gouda cheese is another tasty cheese that is relatively similar on a nutritional basis to Jarlsberg.

As the nutritional values show, Jarlsberg is an excellent source of protein, and it provides a good amount of the mineral calcium.

However, it is also one of the richest dietary sources of vitamin K2.

Vitamin K2, otherwise known as menaquinone, is a form of vitamin K found in tissues and certain foods that undergo bacterial fermentation processes (10).

As a result, animal foods and some types of fermented food contain high amounts of the nutrient. Cheese is one of the best sources (11, 12).

Notably, tests on the vitamin K2 content of various types of cheese have demonstrated that Jarlsberg contains the highest amount of the nutrient among all cheese varieties (10, 13).

The researchers noted that this high vitamin K2 content was likely due to the propionibacteria used to produce the cheese (13).

Vitamin K2 is a relatively under-researched nutrient that is still the subject of numerous new studies. However, based on the existing research, it is thought to play a protective role in bone and cardiovascular health (14, 15, 16).

Key Point: Jarlsberg provides a broad range of nutrients, and it is one of the best dietary sources of vitamin K2.

How To Use Jarlsberg

Since Jarlsberg is a mild but tasty cheese, it can work well in a wide range of recipes without overpowering other ingredients.

Here are some of the most common ways to use Jarlsberg.

Jarlsberg is mild enough to enjoy by itself as a snack at any time of the day.

In fact, for those who prefer ready-made portion sizes, ‘Jarlsberg Cheese Snacks’ is a thing. This dairy product offers bars of Jarlsberg in portable single-serving sizes.

Jarlsberg is often used for making cheese-based dips and fondues, and many different recipes are available online.

For a simple but tasty example, this recipe combines Jarlsberg with butter, sweet onions, mayonnaise, and paprika for a mild and sweet dip.

With its mild, slightly sweet, and nutty flavor, Jarlsberg is a perfect choice for making quiche and similar dishes.

For an indulgent idea, this bacon, cream, and Jarlsberg quiche appears to be popular.

Mild cheese varieties such as Swiss cheese and Jarlsberg are popular choices for toasted sandwiches.

One reason is that the cheese melts quickly in a uniform way, and it also enhances the sandwich without overpowering the other ingredients.

Jarlsberg works well in salads – add a few slices (or cubes) to your favorite salad.

The best way to make a cheese platter is to use smaller quantities of a broader range of different cheeses. Having a few different types of cheese on the platter provides different flavors.

To make a simple cheese platter featuring Jarlsberg, combine it with several other kinds of cheese, cured meat, dried fruit, and nuts.

Due to the way it melts and its mild taste, Jarlsberg is a good option for making gratin-style dishes.

Here is a delicious-looking potato gratin recipe that combines the cheese with potatoes, cream, garlic, and nutmeg.

The official Jarlsberg cheese website has dozens of tasty ideas and recipes.

Different people prefer different types of cheese, but Jarlsberg has a mix of characteristics that make it a cheese worth trying.

The cheese melts perfectly and has a mild yet flavorful taste, making it an excellent option for cooked dishes.

It is also a good source of nutrition as it provides significant amounts of protein, calcium, B vitamins, and vitamin K2.

Perhaps for these reasons, Jarlsberg tends to be one of the world’s most popular cheese options.