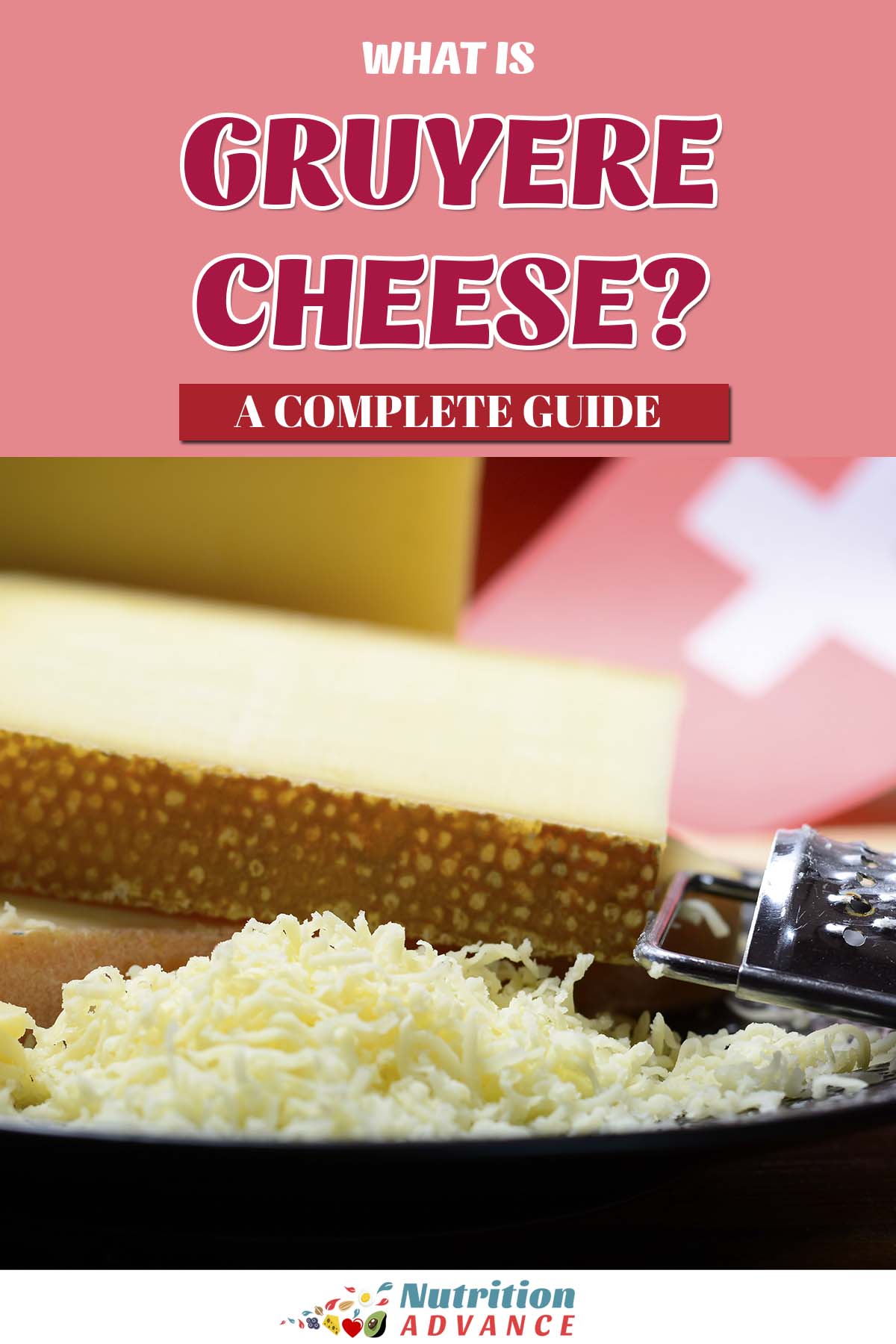 Gruyère is one of the world’s most popular varieties of cheese.

As well as tasting delicious, Gruyère also has some unique and interesting nutritional attributes.

In this article, we take an in-depth look at Gruyère, the history of the cheese, and what makes it unique.

Additionally, we will also examine the potential nutrition benefits the cheese offers. 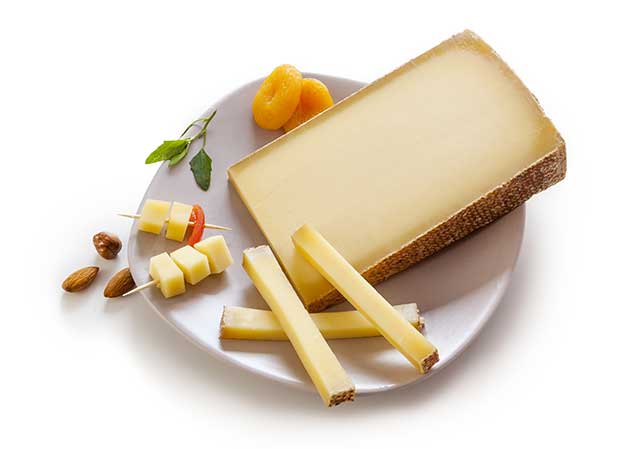 Gruyère is a traditional Swiss cheese with a history dating back to the early 12th century.

The cheese’s origins lie in the medieval town of Gruyère, located in the Fribourg region of Western Switzerland.

Interestingly, the production of the cheese in this area began as far back as the year 1115 (1).

Unlike most commercial cheese products, the production of Gruyère uses unpasteurized raw milk.

For this reason, Gruyère has some distinctive characteristics which we will look at later on.

Gruyère has an ‘Appellation d’Origine Protegéere’ (AOP) certification, which means that cheesemakers should make the cheese following the traditional process and within a specific zone of production (2).

As part of this, the aging of the cheese should be in cellars with a climate similar to the humid environment of a cave.

As mentioned in the above table, the taste and texture of Gruyère depend on the level of aging.

A young Gruyère cheese tastes somewhat buttery with a mildly sweet and nutty flavor, and the cheese is firm yet still smooth.

The taste of young Gruyère is somewhat similar to the popular Norwegian cheese – Jarlsberg.

In contrast, longer-aged Gruyère has a sharper taste. The cheese also has a harder and flakier texture, which lies somewhere in between young Gruyère and crumbly cheeses like Parmesan.

Key Point: Gruyère is a hard cheese made from raw cow’s milk, and it originates in the region of Fribourg, Switzerland.

How Is Gruyère Made?

The minimum maturation times (and classifications) for the main varieties of Gruyère cheese are as below (4);

Key Point: Gruyère cheese has a strict production process which any cheese bearing the ‘Gruyère’ name must adhere to.

In the following tables, you can see the full nutrition profile of Gruyère cheese per 100-grams (3.5 oz).

The source of the nutrition data is the NCC Food and Nutrient Database.

Unfortunately, most nutrition databases do not supply data on vitamin K2 levels in food. We will look into this further in the ‘benefits’ section.

Gruyère has some benefits that all types of cheese share, such as the large amounts of calcium it contains.

However, other potential benefits are unique to the production process of the cheese.

Here are five of the primary benefits of Gruyère.

As discussed earlier, Gruyère is a hard, aged cheese made with milk from grass-fed cows.

On the positive side, high-fat fermented dairy foods are some of the best dietary sources of vitamin K2 (menaquinone) (5).

Dairy products from cows raised on grass are particularly high in vitamin K2. Research on this topic demonstrates that Gruyère contains approximately 65 ng of menaquinones per 100 grams (6).

This amount of menaquinone is not as high as what other cheese products offer, such as the United Kingdom’s Blue Stilton.

That said, it is still a good source of a rare-to-find nutrient.

Research shows that vitamin K2 has greater bioavailability than vitamin K1. Additionally, it may have protective effects for cardiovascular and skeletal health (7, 8, 9, 10).

Gruyère is an excellent source of protein, and it provides around thirty grams of protein per 100 grams.

Per typical ounce (28-gram) serving, the cheese will provide close to ten grams of protein.

It is worth bearing in mind that Gruyère also contains a high number of calories, so the cheese isn’t one of the most protein-dense food options.

Sprinkling grated Gruyère on top of a dish is not only delicious, but it is also a great way to increase the amount of protein in the meal.

However, we can also get it from other food sources.

For example, we can get omega-3 from plant foods like seeds and leafy greens in the form of alpha-linolenic acid (ALA).

The most bioavailable forms of omega-3, however, are DHA and EPA, which we can find in animal foods (11).

On this note, following seafood, dairy and meat from grass-fed animals offer the highest quantities of DHA and EPA.

Since cheesemakers produce Gruyère with milk from grass-fed cows, it has slightly more omega-3 than you might usually expect to find in cheese.

Omega-3 has anti-inflammatory properties, and a wide range of research suggests that it may help to improve cardiovascular health (12). 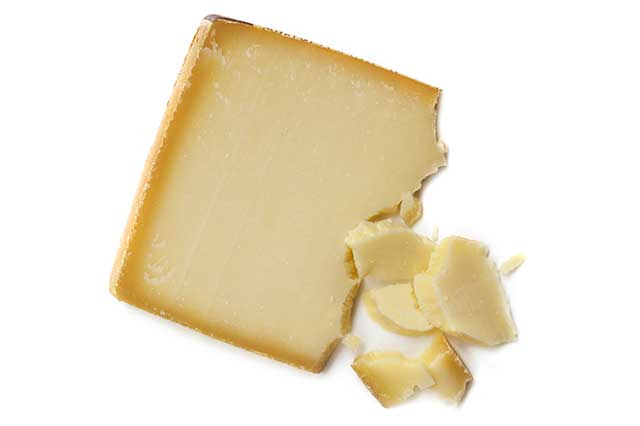 Like all cheese (and milk products in general), Gruyère is very rich in calcium, and it provides more than 100% of the recommended intake per 100 grams.

While many people associate calcium with bone health, it has a wide-ranging set of functions in the human body.

Among these, calcium plays a crucial role in nerve and cell signaling, muscle contraction, blood clotting, and maintaining healthy bones and teeth (13).

Per ounce (28-gram) serving, Gruyère offers 287 mg of calcium, which is equivalent to 29% of the daily value.

Most commercial cheese is made from pasteurized milk.

This pasteurization process involves heating milk to a high temperature to kill any harmful bacteria present and sterilize the milk.

While killing potentially harmful bacteria is a good thing, pasteurization also kills some beneficial types of bacteria too.

Due to the bacterial starter cultures used in cheesemaking, all cheese contains some beneficial bacteria. However, since cheesemakers produce Gruyère using unpasteurized milk, these “good” bacterial species may be present in more significant numbers (14, 15).

Probiotics are thought to improve the health of the human gut ‘microbiome,’ which refers to the collection of microorganisms (small bacteria) contained in the digestive tract (16).

While research in this area is at an early stage, ongoing research suggests that gut health may have a far-reaching impact on whole body health.

For instance, studies suggest that an imbalanced ratio of “bad” to “good” gut bacteria can increase the risk of obesity and several types of chronic disease (17, 18).

How To Use Gruyère

There are many different ways to make use of Gruyère cheese, but for those in need of ideas, here are some of the best.

Gruyère tastes delicious on its own, and it works well in a cheese platter combined with various cheeses, nuts, and fruit.

For those that enjoy an occasional drink, it also goes well with wine.

Gruyère is one of the most popular forms of cheese for baked goods, and people commonly use it in foods like quiche.

Grating some Gruyère on top of a dish is delicious, and it is much more flavorful than milder cheeses like mozzarella.

Using the cheese in this way adds a lot of flavor, as well as protein and nutrients, to a meal.

Gruyère is also a common way to enhance the flavor of any soup.

All it needs is about an ounce (28-gram) of the cheese melted into the soup near the end of cooking.

Gruyère is one of the oldest cheeses, and it is also one of the best tasting.

Since the cheese also has several potential health benefits, there is a lot to like about Gruyère.

For something delicious but a little different, here is a review of cream cheese. Is it good or bad for you?